20 minutes to master Android gradle, the middle-aged crisis of programmers

To declare a task, you only need to add a task before the task name. For example, the following declares a hello task.

Usually, we attach some execution actions to the task, which are called actions, such as

It is almost meaningless to declare a task alone in actual development. More often, multiple tasks are combined, one depends on the other to form a series of task sets.

This syntax is equivalent to

You can create a new one called build. Com anywhere Gradle text to practice the task definition and dependency described above.

Go on to Project

An Android project is usually composed of the above structure, which has many unknown clever uses.

About setting Gradle can also write code, which many people don't know. The following code is my last article[ Design suggestions for enterprise Android modular platform ]An example described in setting In the gradle file, you can specify a project location, where you can import modules from an external project into the APP project.

The root gradle file of a project is used to describe the unified resources of the project, including the use of sub resources, the dependency environment of plug-ins, and so on.

Generally, when we refer to aar in each module, we will manually compile it in each module, such as support package. But in fact, there is a very simple way to write it once, that is, to declare the dependencies in the subprojects closure in the root gradle file of the project.

Usually, when writing compile dependencies, we will write as follows:

In fact, in gradle, this is a method call. Its essence is that the compile() method passes in a map parameter. Therefore, the complete writing method is actually as follows:

At the same time, the available key s of map include not only the commonly used group, name and version, but also the rarely used configuration and classifier.

Look at the Task again

Groovy is based on Java, but it adds a lot of closures to help develop and build scripts more conveniently. If you don't know groovy, it doesn't matter. Just write it as Java. In fact, it's most appropriate to write it as Kotlin. If you don't know Kotlin yet, I strongly recommend you check my [ Kotlin Primer ] series of articles

Each Task can configure its input and output. If the output of a Task is consistent with the previous output, it will not be executed repeatedly. At this point, UP-TO-DATE will be output on the command line, indicating that it is the latest result.
For example, the following tasks:

UP-TO-DATE will be output after repeated execution

Finally, Xiaobian wants to say: no matter what direction to choose in the future, it is important to learn Android technology well. After all, for programmers, there are too many knowledge contents and technologies to learn. If they want not to be eliminated by the environment, they have to constantly improve themselves. It is always us to adapt to the environment, not the environment to adapt to us!

If you want to get a high salary to improve your technology, your salary will get a qualitative leap. The quickest way is that someone can take you to analyze together, which is the most efficient way to learn. Therefore, in order for you to smoothly advance to middle and senior architects, I specially prepared a set of high-quality Android architect courses such as source code and framework video for you to learn, so as to ensure that your salary will rise to a higher level after you learn.

When you have a learning route, what to learn, and know how to go in the future, you always have to practice when you see too much theory.

The knowledge of UI is the most used nowadays. In the popular Android induction training in those years, you can easily find a good job by learning this small piece of knowledge.

However, it is obvious that it is not enough now. Refuse the endless CV, go to the project practice in person, read the source code and study the principle! 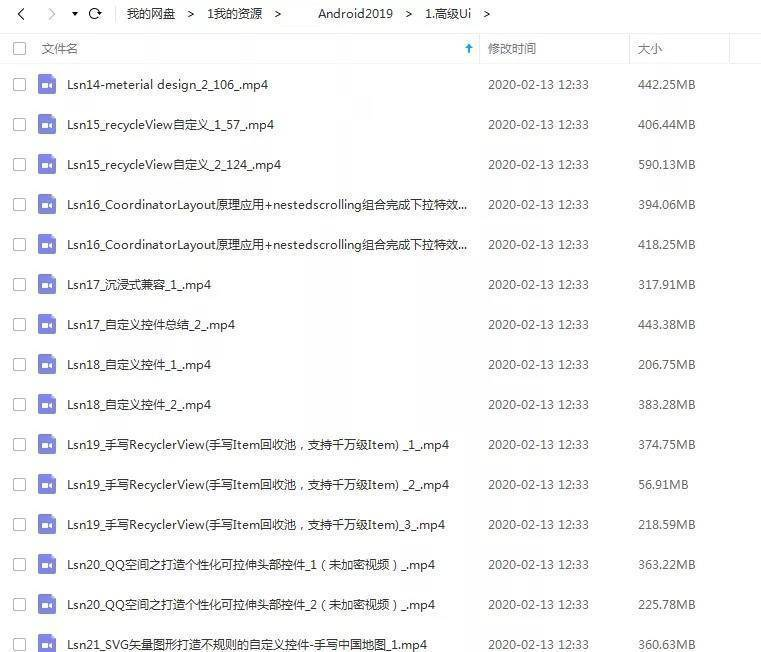 The knowledge of UI is the most used nowadays. In the popular Android induction training in those years, you can easily find a good job by learning this small piece of knowledge.

However, it is obvious that it is not enough now. Refuse the endless CV, go to the project practice in person, read the source code and study the principle!