This blog briefly introduces the relevant knowledge of PDF417 QR code and the coding steps and processes.

PDF417 is a two-dimensional bar code invented by Symbol Technologies, Inc., which is a stacked two-dimensional bar code. PDF(Portable Data File) means "portable data file". Each bar code character constituting the bar code is composed of 4 bars and 4 blanks, a total of 17 modules, so it is called PDF417 bar code. PDF417 barcode can only be recognized by a barcode reader with 417 decoding function. The inventor is Dr. Wang Yinjun, who went to Taiwan for aesthetics. Dr. Wang graduated from the Department of information of national Jiaotong University in 1984 and obtained the computer master's and doctoral degrees from the University of New York at Stony Brook. In 1988, he entered symbol technology to carry out the research and development of two-dimensional bar code, and launched PDF417 at the end of 1992, He led the development of the world's first two-dimensional bar code laser code reading system from 1989 to 1992. In March 1993, the author officially introduced PDF417 into Taiwan and handed it over to Xiangji information promotion and research and development of related package software (Huang Qingxiang, 1995).

At present, PDF417, Maxicode and Datamatrix have been selected as the development scope of two-dimensional bar code international standard by American National Standards Institute (ANSI) mh10 sbc-8 Committee. Among them, PDF417 is mainly intended to be applied to transportation packages and commodity information labels (Burnell, 1995). PDF417 not only has error detection capability, but also can read back complete data from damaged bar codes (Moore, 1994), that is, "error recovery capability", and its error recovery rate is up to 50%.

PDF417 bar code is a portable data file with high density and high information content. It is an ideal means to realize the automatic storage, carrying and automatic reading of large capacity and high reliability information such as certificates and cards.

Due to the large capacity of PDF417 two-dimensional bar code, in addition to encoding people's name, unit, address, telephone and other basic data, it can also store human characteristics such as fingerprints, retinal scanning, photos and other personal records in the bar code, which can not only realize the automatic input of certificate data, but also prevent the forgery of certificates and reduce crime. PDF417 has been applied in annual license review, vehicle violation registration, fines and periodic inspection of transportation departments in the United States, Canada and New Zealand. The United States also applies PDF417 to ID card, driver's license and military card. In addition, Mexico also applies PDF417 to customs declaration documents and certificates, so as to prevent counterfeiting and crime.

PDF417 is a public code. Anyone can use its algorithm without paying. Therefore, it is an open bar code system. PDF of PDF417 is the abbreviation of portable data file. Its bar code is similar to a data file. It can store more data and can be carried with you or with the product (Paclidis, 1992). As its name suggests, the storage capacity of each PDF code can be as high as 1108 bytes. If the number is compressed, it can be stored to 2729 bytes.

Each floor consists of the following five parts:

In addition to the start code and end code, the constituent characters of the left label area, data area and right label area can be called codeword. Each code is composed of 17 modules. Each code can be divided into 4 lines (or black lines) and 4 blank (or white lines). Each line can not exceed the width of 6 modules at most. Due to different data sizes, the number of rows, data modules and word codes of each 417 code can range from 1 to 30. The composition of word code is shown in the figure: 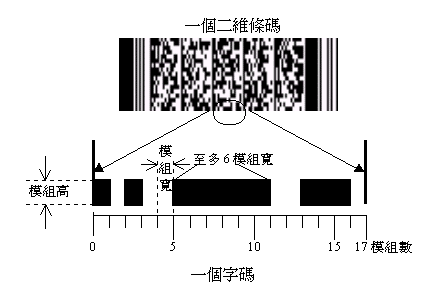 Because the combination of symbols is more flexible, each PDF417 two-dimensional bar code can be printed into different length width ratio and density according to different physical equipment to meet the requirements of printing conditions and scanning conditions. The width x of each module is one of the most important dimensions in PDF417 code. The minimum limit of x value is 0.0075 inch (about 0.191mm). In the same bar code symbol, the value of X is fixed.

The minimum height and length of PDF417 can be calculated by the following formula:

An important feature of PDF417 two-dimensional bar code is its high ability to automatically correct errors. However, the error correction ability of PDF417 is related to the amount of data that can be stored in each bar code. PDF417 code divides error recovery into 9 levels, and its value ranges from 0 to 8. The higher the level, the stronger the error correction ability, but the less data that can be stored. It is generally recommended to include at least 10% of the check word code. The relationship between data storage and error correction level is shown in the table below:

As mentioned earlier, the error correction level involves two error types: read rejection error (E error) and substitution error (T error). No matter which barcode machine is used, there is a certain precision limit, resulting in a deviation between the width of lines and blanks and the ideal width. The barcode scanning equipment can read the inaccurate barcode symbols within the allowable range of the decoding algorithm. At present, the minimum value of X specified in the standard is 0.0075 inch (about 0.191mm). This limit also reflects the technical status of the current standard equipment.

Based on the discussion in this section, the characteristics of PDF417 are shown in the following table:

Indicates the default white space (margin) around the code and the default error correction level, respectively.

input is an information byte array, 0 is black and 1 is white;
Margin is the margin border around the barcode;
Returns the input bit matrix.

In addition, there is the function rotateArray(), which obtains the PDF417 QR code array and rotates it 90 degrees.
This makes the QR code in the same direction on the screen when rotating the screen.

PDF417 implements the top-level class of the logical part.

Next, several set methods are introduced:

setEncoding(Charset encoding) sets the character encoding to use.

determineDimensions(int sourceCodeWords, int errorCorrectionCodeWords) are used to determine the best columns and rows for the specified number of codewords.
Where sourceCodeWords is the number of code words and errorCorrectionCodeWords is the number of error correction code words. The function returns the dimension object, including columns as width and rows as height.