Hook is actually a system mechanism provided in windows to replace "interrupt" under DOS. The concept of hook is very common in Windows desktop software development, especially the mechanism triggered by various events. Once a hook event occurs after a specific system event is hook, The program that hooks the event will receive the notification from the system, and then the program can respond to the event at the first time. It may be better to understand it as "hijacking" in the program. We can hijack an object through hook technology, pull out the program of an object and replace it with our own rewritten code fragment, modify parameters or replace the return value, so as to control its interaction with other objects.

Generally speaking, hook is actually a robbery in the way. Ma Bangde took his wife out of the city, ate hot pot and sang songs. Suddenly, he was robbed by Ma bandits. Zhang Mazi robbed Ma Bangde's train, turned into a county magistrate, and rushed to Echeng to take office with his men. Hook's process is the process of pockmarked Zhang replacing Ma bond.

In JavaScript reverse, the process of replacing the original function can be called Hook. The following is a simple code to understand the Hook process:

This method of direct coverage of the original function is usually only used for temporary debugging, which is not practical, but it can help us understand the Hook process. In the actual JS reverse process, we will use more advanced methods, such as Object.defineProperty().

Basic syntax: Object.defineProperty(obj, prop, descriptor). Its function is to directly define a new property on an object or modify an existing property of an object. The meanings of the three parameters received are as follows:

obj: the current object whose attribute needs to be defined;

Descriptor: attribute descriptor, which can take the following values:

Generally, the definition and assignment of objects are as follows:

In Hook, the most used access descriptors are get and set.

set: the setter function of the property. If there is no setter, it is undefined. When the property value is modified, this function will be called. This method accepts a parameter, that is, the new value assigned, and will be passed into the this object at the time of assignment.

Use an example to demonstrate:

In this way, we can add some code when setting a value, such as debugger;, Let it be disconnected, and then use the call stack for debugging to find the place where the parameters are encrypted or generated. It should be noted that when the website is loaded, we must first run our Hook code, and then run the website's own code before it can be successfully disconnected. This process can be called Hook code injection. Several mainstream injection methods will be introduced below.

The following is based on the information in a Qiyi cookie__ Take dfp value as an example to demonstrate how to inject Hook.

When you come to the home page of a strange art, you can see that there is a in its cookie__ dfp value:

If you can't find it by direct search, we want to use Hook to generate__ When the dfp value is broken, you can write the following self-executive function:

If (val. indexof ('_dfp')! = - 1) {debugger;} means retrieval__ The position where DFP first appears in the string is equal to - 1, indicating that the string value does not appear, otherwise it appears. If so, disconnect the debugger. Note that it cannot be written as if (Val = = '_dfp') {debugger}, because the value passed by Val is similar to__ DFP = xxxxxxxxx, which cannot be disconnected.

With the code, how to use it? That is, how to inject hook code? Collocation tool is official account. The Fiddler capture tool is recommended for the plug-in of programming cat. The plug-in can be obtained by entering the key word [Fiddler plug-in] in public key. Its principle can be understood as a process of intercept > processing > release. Fiddler is used to replace the response. After Fiddler intercept to data, insert Hook code in the first row of source code, because Hook code is a self executing function. Then once the web page is loaded, it is bound to run the hook code first. After the installation is completed, as shown in the figure below, open the packet capture and click to open the injection hook: 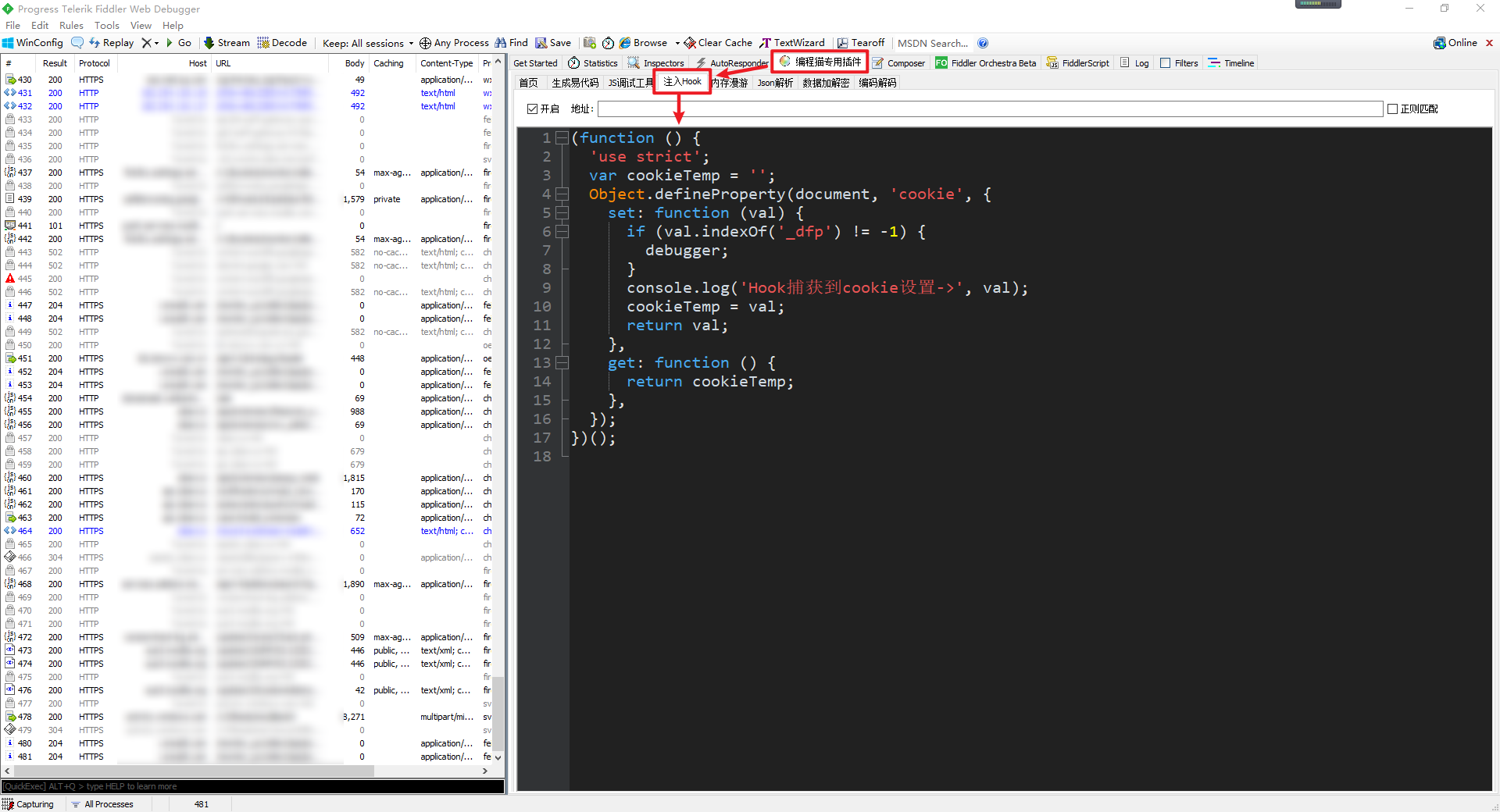 After the browser clears the cookie and re enters the page of a Qiyi, you can see the successful disconnection. You can see some cookie values captured on the console. At this time, val is__ The value of dfp. Next, you can see the calling process of some functions in the Call Stack on the right. Follow up in turn to find the beginning__ Where dfp is generated.

TamperMonkey, commonly known as the oil monkey plug-in, is a free browser extension and the most popular user script manager. It supports many mainstream browsers, including Chrome, Microsoft Edge, Safari, Opera, Firefox, UC browser, 360 browser, QQ browser, etc. it basically realizes one-time script writing and can run on all platforms, It can be said that browser based applications are truly cross platform. Users can directly obtain scripts published by others on platforms such as GreasyFork and OpenUserJS. They have many and powerful functions, such as video analysis, de advertising, etc.

We still take a cookie of Qiyi as an example to demonstrate how to write TamperMonkey script. First, go to the app store to install TamperMonkey. The installation process will not be repeated. Then click the icon to add a new script, or click the management panel, and then click the plus sign to create a new script, and write the following code: 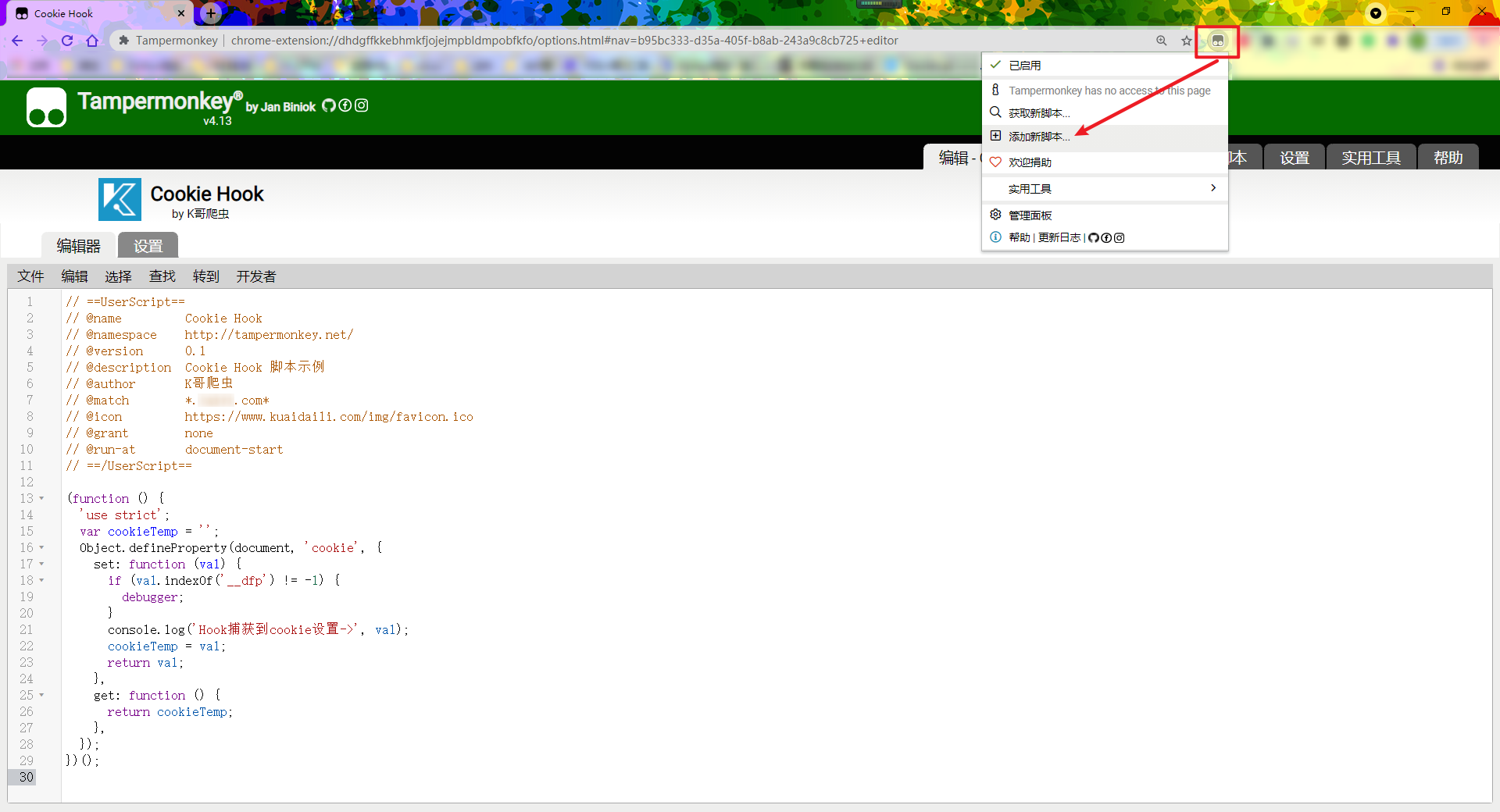 The JavaScript self-executing function of the main body is the same as the previous one. Note here that the first annotation is meaningful, and all options are referenced TamperMonkey official document , some common and important options are listed below (especially the @ match, @ include and @ run at options):

Clear the cookie, open the TamperMonkey plug-in, and come to the home page of a Qiyi again. You can see that it has also been successfully disconnected. Similarly, you can follow up the call stack for further analysis__ The source of the dfp value. 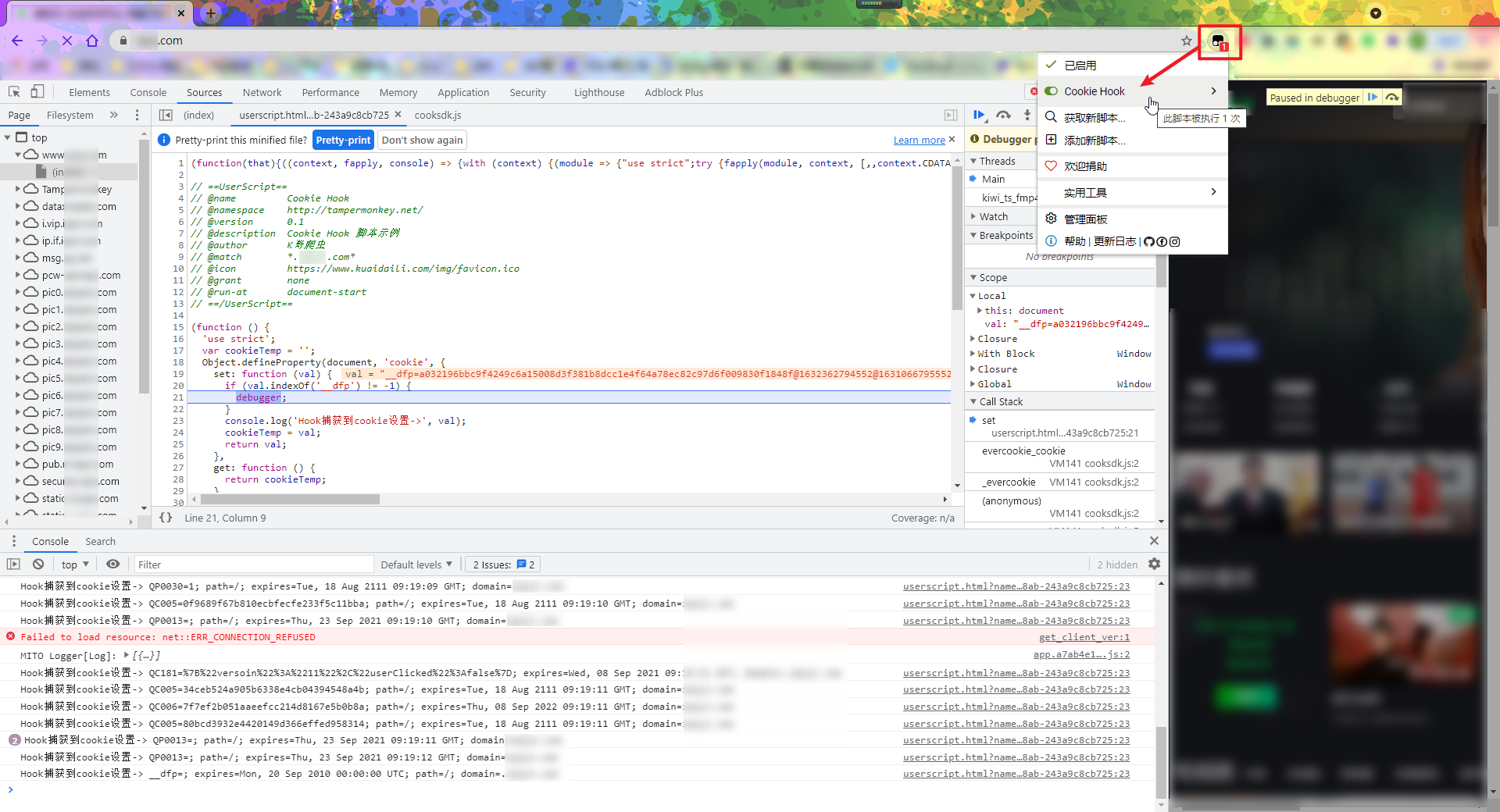 The official name of the browser plug-in should be browser Extension. The browser plug-in can enhance the browser function and also help us Hook. The preparation of the browser plug-in is not complicated. Taking the Chrome plug-in as an example, just ensure that there is a manifest.json file under the project, which is used to set all plug-in related configurations and must be placed in the root directory. Including manifest_version, name and version are essential parameters. If you want to learn more, you can refer to them Xiao Ming Blog and Google official documents . It should be noted that the Firefox browser plug-in may not run on other browsers, while the chrome plug-in can run not only on the Chrome browser, but also on all domestic browsers with webkit kernel, such as 360 speed browser, 360 security browser, Sogou browser, QQ browser, etc. We still use a cookie of Qiyi to demonstrate how to write a Hook plug-in for Chrome browser. 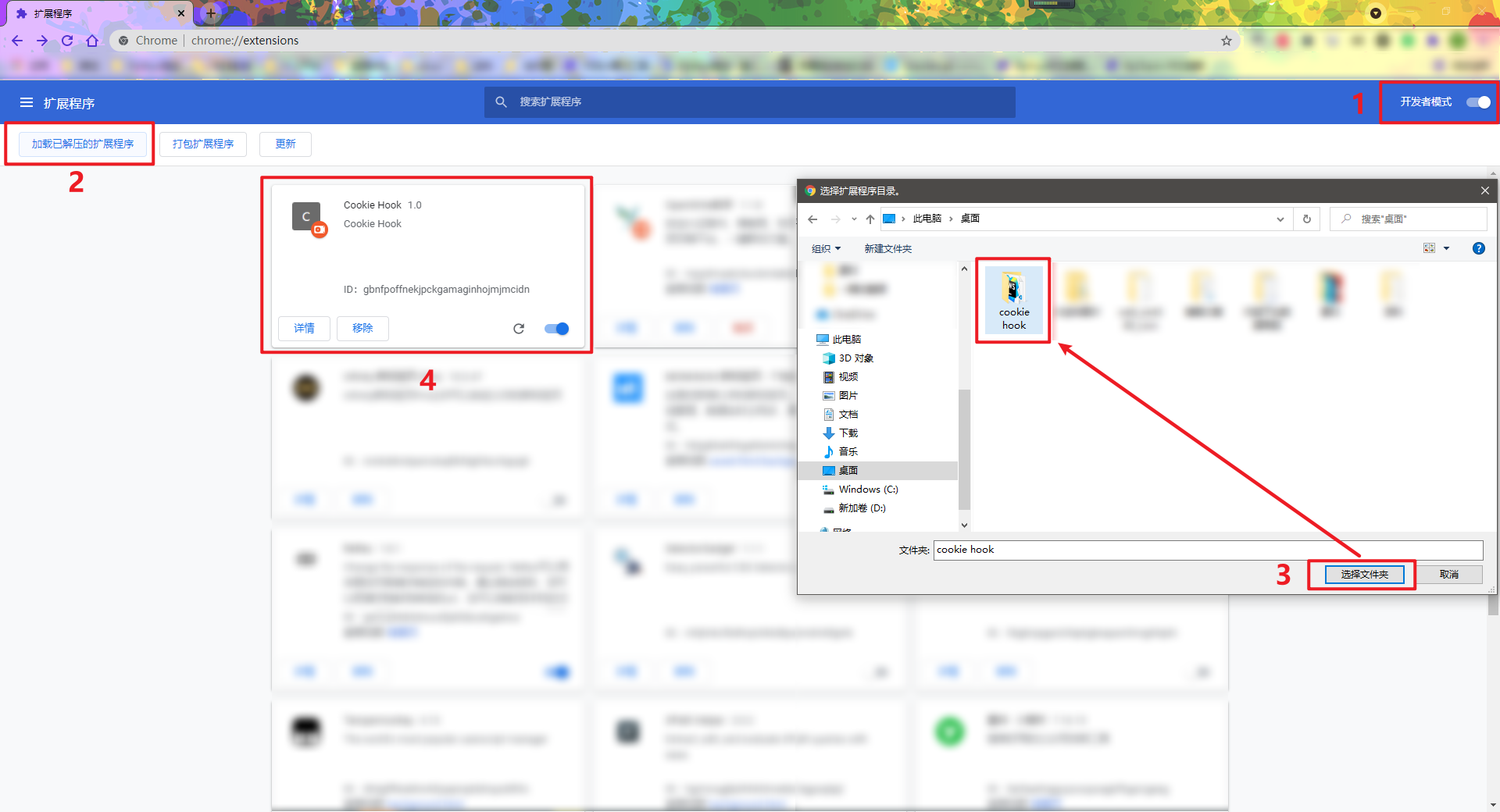 When you come to a Qiyi page, clear the cookie and re-enter, you can see that it is also successfully disconnected. You can find the place where its value is generated by tracking the call stack:

In addition to using the above Object.defineProperty() method, you can also directly capture the relevant interface and then rewrite the interface. The common Hook codes are listed below. Note: the following is only the key Hook code. The specific injection methods are different and need to be modified.

Cookie Hook is used to locate the generation location of key parameters in the cookie. The following code demonstrates that when the cookie matches__ dfp keyword, insert breakpoint:

The Header Hook is used to locate the generation location of key parameters in the Header. The following code demonstrates the insertion of breakpoints when the Header contains the Authorization keyword:

URL Hook is used to locate the generation location of key parameters in the request URL. The following code demonstrates that when the request URL contains the login keyword, the breakpoint is inserted:

The JSON.parse() method is used to convert a JSON string into an object, which may be encountered in the encryption process of some sites. The following code demonstrates how to insert a breakpoint when JSON.parse() is encountered:

After the following code is executed, all function operations will print out the JS source code to be executed on the console: