Do you really know the past and present lives of Spring annotation driven? This article makes you suddenly enlightened! 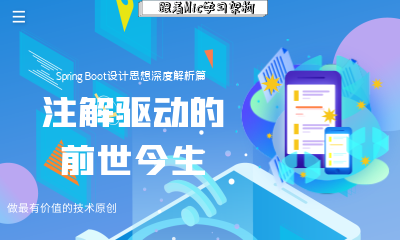 This article, in the iteration from Spring 1. X to Spring 5.x, considers the development process of Spring annotation driven from the current perspective, which will help us better understand the annotation design in Spring.

In the era of Spring Framework 1. X, 1.2.0 was the watershed of this era. At that time, Java 5 had just been released, and there was a technical trend of using Annotation in the industry. Naturally, the Spring Framework also provided support. For example, annotations such as @ Transactional had been supported at that time, but at this time, the XML configuration method was the only choice.

In the Spring framework 2. X era, version 2.0 added @ Required, @ Repository, AOP related @ Aspect and other annotations in the Annotation. At the same time, it also improved the XML configuration capability, that is, extensible XML. For example, open source frameworks such as Dubbo are based on the extension of Spring XML to integrate Spring perfectly, thus reducing the threshold for Dubbo to use.

In the 2.x era, version 2.5 is also a watershed in this era. It introduces some core annotations

Although the Spring 2.x era provides many annotations, it still does not break away from the XML configuration driver, such as < context: Annotation config > < context: component scan >. The former is responsible for registering the Annotation processor, and the latter is responsible for scanning the classes marked by Spring schema annotations under the specified package path under the classpath and registering them as Spring beans

Spring framework 3.0 is a milestone era, and its functional features began to be greatly extended, such as the full embrace of Java 5 and Spring Annotation. More importantly, it provides the Configuration class annotation @ Configuration. Its primary task is to replace the XML Configuration method. Unfortunately, spring framework 3.0 has not introduced the annotation to replace the XML element < context: component scan >, but chose a transitional method @ ImportResource.

@ImportResource allows you to import legacy XML configuration files, such as

In version 3.1, @ ComponentScan is introduced to replace the XML element < context: component scan >. Although this annotation is a small upgrade, it is a great progress in the annotation driven field for spring. So far, it also reflects the unconfigured support of spring.

ComponentScan annotation is the most frequently used annotation, which is equivalent to < context: component scan > in the xml configuration file. Its main function is to scan the classes under the specified path, identify the classes to be assembled, and automatically assemble them into the Ioc container of spring.

The main forms of identifying the classes to be assembled are annotation identified classes such as @ Component, @ Repository, @ Service and @ Controller.

ComponentScan will scan all classes marked with relevant annotations under the current package into the IoC container by default;

What does the import annotation mean? If you think of an annotation in the form of < import resource / > in xml, you can understand its role. Import is to merge multiple container configurations into one configuration. The meaning expressed in JavaConfig is the same.

So far, we have learned that the Spring Framework completely replaces XML in the annotation driven era. So far, has the Spring team stopped? You are too simple. Although non configuration can reduce the trouble caused by configuration maintenance, there will still be basic configuration statements for third-party organizations. It is also cumbersome, so Spring exits the @ Enable module driver. The function of this feature is to assemble functional components with the same responsibilities in a modular way, which further simplifies the configuration of Spring beans.

Think about which steps are omitted using Enable?

First, let's look at the code that doesn't use Enable. There will be one in it

In the parse method, the following code is defined

This class is used to parse the @ Scheduled annotation.

ok, let's take another look at the enableshcheduling annotation. We can see that it will automatically register a bean of ScheduledAnnotationBeanPostProcessor. Therefore, through this example, we want to express the function of the Enable annotation, which can help us omit the declared configuration of some third-party module beans.

Spring 4.x version is a perfect era of annotation. It mainly improves the Conditional assembly ability, introduces @ Conditional annotation, and realizes cooperation through custom conditions, making up for the shortcomings of Conditional configuration in previous versions.

In short, Conditional provides a Bean loading condition judgment, that is, if this condition is not met, the objects declared through @ Bean will not be loaded automatically. How to use it?, First, let's briefly take you to understand its basic use.

@Condition al is an annotation. Let's look at the declaration of this annotation, which can receive an array of conditions.

After the overall analysis of Spring annotation driven, it is not difficult to find that the reason why we can easily complete a large number of functions in Spring based on annotations is due to the efforts of the Spring team to continuously solve the user pain points.
The automatic assembly mechanism of Spring Boot is also evolved on the basis of Spring annotation driven. In the subsequent content, I will specifically analyze the automatic assembly mechanism of Spring Boot.

Copyright notice: unless otherwise stated, all articles on this blog adopt CC BY-NC-SA 4.0 license agreement. Reprint please indicate from Mic to take you to learn architecture!
If this article is helpful to you, please pay attention and praise. Your persistence is the driving force of my continuous creation. Welcome to WeChat public official account for more dry cargo.