Play the classic game little bee 40 years ago again. This time, the source code is cleared

This article is suitable for friends with C language foundation 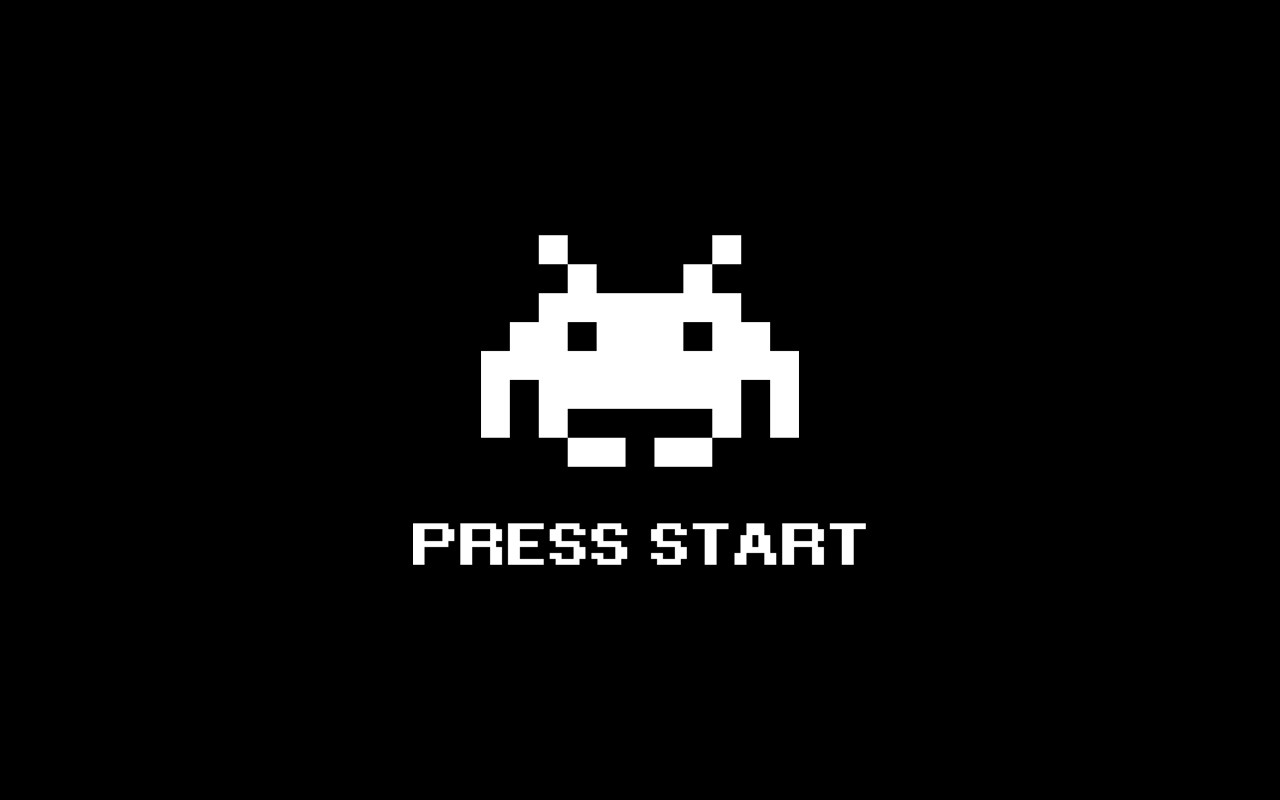 This is from Hello GitHub Explaining open source projects Series, this issue explains the childhood memories of the post-80s and post-90s. si78c, a C language reprint of the classic arcade game space invader, also known as "little bee", was born in 1978.

This game was all the rage at that time. I believe many friends played it when they were young. Now grown up, I don't know how many friends are interested in its source code!

The original space invader was written in about 2k lines of 8080 assembly code, but the assembly language is too low to read. The open source project si78c explained today was rewritten in C language according to the original assembly code, and restored the interrupt and cooperation logic of the original arcade hardware to the greatest extent, When running, its memory state is almost the same as that of the original version, almost reaching a perfect replica, which really brightens my eyes!

Now, please follow Hello GitHub to run this open source project, read the source code, and experience the subtlety of game design 40 years ago through history!

The experimental environment for this article is Ubuntu 20.04 LTS, and the GCC version is greater than GCC 3

First si78c use SDL2 to draw the game window, so you need to install dependencies:

Then unzip the contents of invaders.zip into inv1. The final directory structure is as follows:

After that, an executable file will be generated in the bin folder, and the game can be started by running:

The game control buttons are as follows:

The original code of space invader runs on the 8080 processor, and its contents are all written by assembly code and involve some hardware operations. In order to simulate the logic and effect of the original arcade code, si78c converts the assembly code into C language as much as possible, and uses a Mem structure to simulate the hardware of the original arcade, Therefore, some codes are strange or even unimaginable from the perspective of pure software, but due to space reasons, the author cannot post all the codes into the article for explanation, so please read this article with my detailed comments.

2.2 what is a collaborative process

si78c uses the co process of ucontex library to simulate the process scheduling and interrupt operation of the original arcade.

Coroutine: coroutine is lighter, faster and saves resources. Coroutine is equivalent to thread to process.

If this is not intuitive enough, you can look at the following state transition diagram, and the combination of graphics and text is more intuitive.

After that, every time yield() is called, swapcontext() will be used to switch between the two coroutines:

Due to the limited space of the article, the following only shows the key source code. More detailed source code line by line Chinese Notes:

As mentioned earlier, si78c is a pixel level reproduction of the original arcade game, and even most of the memory data are equal. In order to do this, si78c simulates part of the hardware of the arcade: RAM, ROM and video memory, which are encapsulated into a large structure called Mem in the code. The memory allocation is as follows:

It can be seen that the RAM of the machine was only a poor 1kb in size, and each bit was precious, which needed careful planning by the program. Here is a RAM allocation table, more details 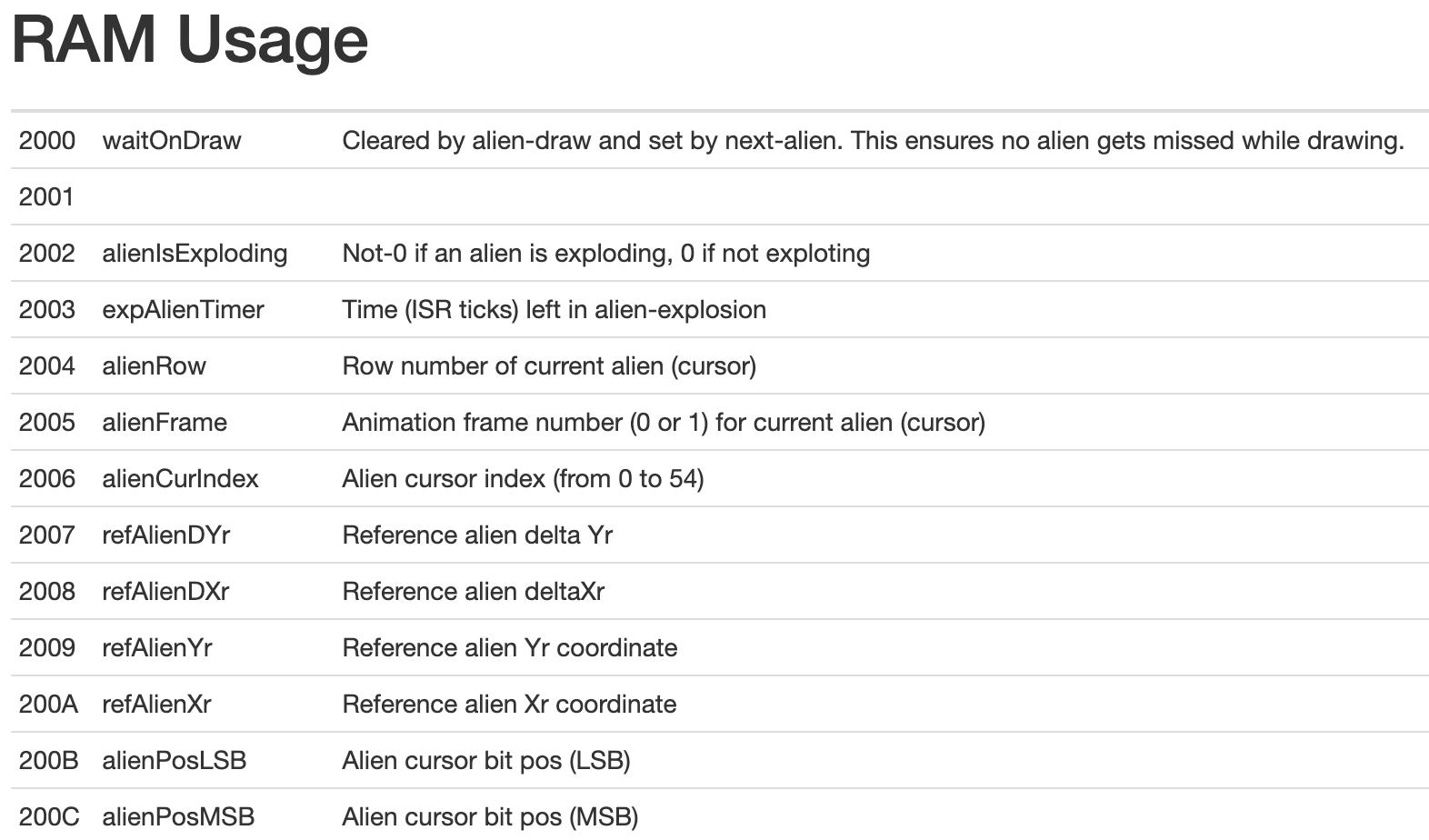 2.4 from analog video memory to screen

Before explaining the principle of game animation display in detail, we need to understand how game materials are stored: 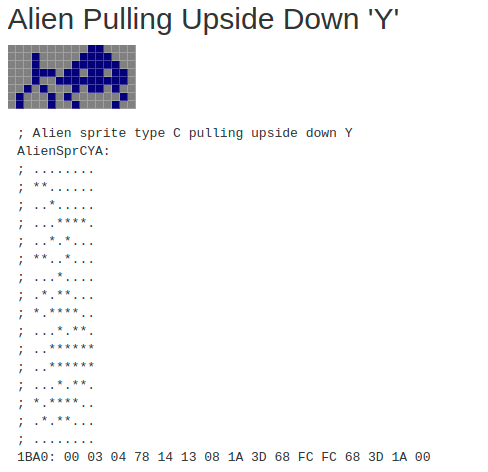 The picture comes from the interpretation of arcade assembly code

In the original ROM of the arcade, the game material is directly saved in the memory in binary format, in which each binary represents whether the current pixel is black or white

The author of si78c directly exchanges the X and Y axes when displaying the picture to achieve the effect of rotating the picture.

We can find the structure named Mem, in which m.vram (0x2400 to 0x3FFF) simulates the video memory of the arcade. Each bit represents the black (0) and white (1) of a pixel, which is rendered from the lower left corner to the upper right corner. The corresponding relationship is shown in Figure 2-2: 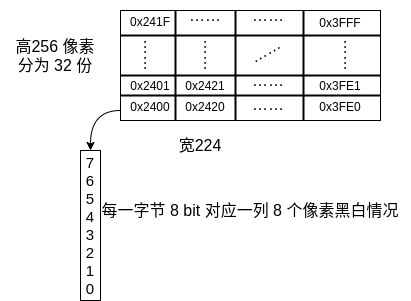 All the codes related to animation drawing in the game are modifying the data of this part of the area, such as DrawChar(), ClearPlayField(), DrawSimpSprite(), etc. So how to make the simulated existing content displayed on the player's screen? Note that the render() function is called at the end of the loop in code 3-1. It is responsible for reading the contents of the analog video memory one by one and rendering a pixel block where there are pixel blocks on the window.

When you think about it carefully, it is not difficult to find that this method of modifying the analog memory first and then unified drawing is not much easier, even a little strange. This is because si78c simulates the display process of arcade Hardware: modify the corresponding video memory, and then the hardware will automatically display the contents of the video memory on the screen.

The input() function in code 3-1 is responsible for detecting and storing the user's key information, and its bottom layer depends on the SDL library.

Like all C programs, si78c runs from the main() function:

The startup process is shown in the figure:

The original game code (8080 assembly) uses interrupt driver (this programming method is related to hardware, and you can understand what interrupt is by yourself) to cooperate with collaborative multitasking operation. In order to simulate the original game logic, the author takes the large loop in main() as the hardware Behavior Simulation Center (realizing interrupt management, CO process switching and screen rendering). About one third of the game's time is spent running the main thread. The main thread will be preempted by two interrupts, midscreen and vblank. The two irq() in code 3-1 realize the simulation of interrupts (set the corresponding variables as flag bits).

Enter loop for the first time_ The process of core() is as follows: 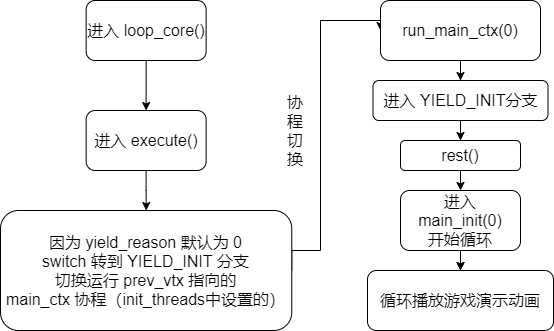 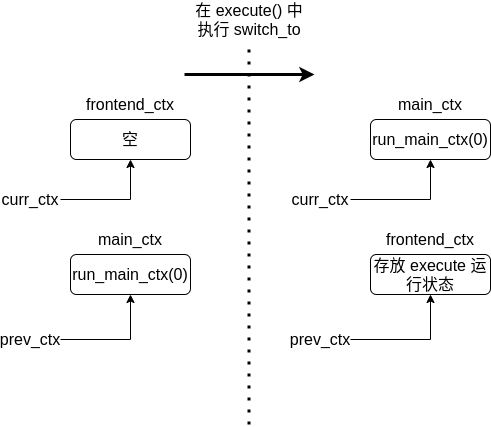 When execute() returns, it will return to loop according to the normal execution process_ Core (), as if it had never been paused.

Watch main carefully_ We can find that the main loop in init calls the timeslice() function many times (for example, in OneSecDelay()), and we can implement main through this function_ CTX and frontend_ The time slice rotation operation between CTX is as follows: 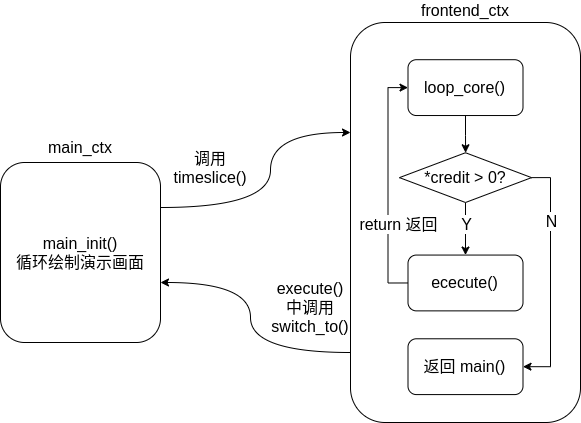 In main_init() mainly does the following:

If you just look at main_ We will find that the functions in init () do not involve much game logic in the code, such as alien movement, shooting, player coin check and so on. It seems that they do not exist at all. More often, they are manipulating memory and setting flag bits. So where are the functions related to game logic processing? This part will be revealed below.

Loop in code 3-1_ The core () function is separated by two irq(). We mentioned earlier that the large loop in main() is essentially simulating the hardware behavior of the arcade. On the real machine, the interrupt will be executed only when triggered, but on si78c, we can only use the loop_ Call irq() between core () to simulate the generation of an interrupt, and poll the interrupt status in execute() to determine whether to enter the interrupt processing function. The process is as follows: 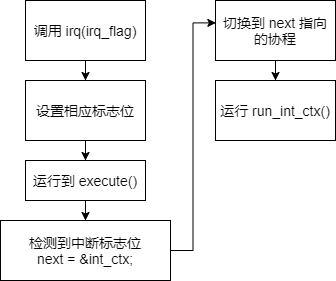 At this time, its collaboration status is as follows: 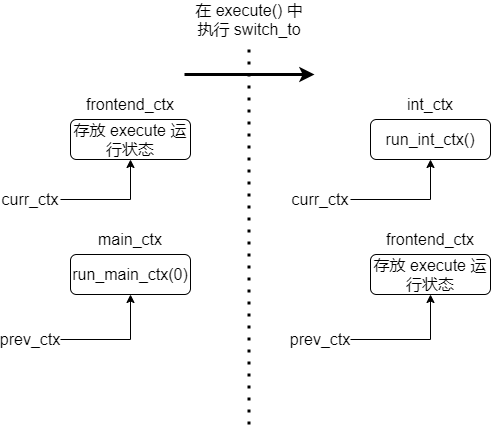 There are two types of interrupts: midscreen_int() and vblank_int() the two interrupts take turns.

In this part, the RunGameObjs() function basically includes the player's movement and drawing, the movement, collision detection and drawing of player bullets and alien bullets, and all game logic processing. CursorNextAlien() finds the next living alien to be drawn, sets the flag bit to wait for drawing, and detects whether the alien spacecraft touches the bottom of the screen.

After running, it will return to run_int_ctx() continues to run until yield(YIELD_INTFIN) indicates that the coroutine is switched back to execute(), and set next to main again in execute()_ CTX make main_init() can continue to run (see code 3-2 for details).

One of its main functions is to detect whether the player wants to quit the game or makes a coin operation. If it is already in the game mode, play the fleet sound in turn and draw it on the midscreen_int(), run RunGameObjs() to handle the firing and moving events of players and aliens, and TimeToSaucer() to randomly generate mysterious UFOs. If it is not in game mode, enter ISRSplTasks() to adjust the animation that should be played on the current screen.

We can note that if the player makes a coin, it will enter if (m.numcoins! = 0) and call yield(YIELD_WAIT_FOR_START). After that, it will be prompted that this function will not return. There are such hints in many places in the code of si78c. It is not a simple call to a function that will not return.

Observation Code 3-2 can be found in YIELD_PLAYER_DEATH,YIELD_WAIT_FOR_START,YIELD_INVADED,YIELD_ Init is called in all four branches of tilt_ Threads (yield_reason). Int will be reset in this function_ CTX and main_ctx stack and rebind to call run_ main_ The parameter for CTX is yield_ Reason, so run at the next execution_ main_ctx will jump to the appropriate branch according to the instruction of the interrupt.

It was mentioned at the beginning that the RAM of the arcade was only a poor 1kb. Such a small place must not allow us to store the information of each object on the screen, but the location of players, the location of aliens, their bullets and the damage of shields on the screen will be updated in real time. How to do this?

I found that the content distribution in the space invader game area is still very regular. Special ships (flying saucers) will only appear on the top of the screen, and the positions of shields and players will not change. Only the position of bullets is difficult to grasp. Therefore, after carefully studying the code, it can be seen from DrawSpriteGeneric(), the game's collision detection is just a simple way to judge whether pixel blocks coincide, When judging what the player's bullet hit, the PlayerShotHit() function only needs to judge the vertical coordinates (Y coordinates) of the bullet. If > = 216, it hit the top, > = 206, it hit the mysterious UFO, and others hit the shield or alien submunitions. And because the alien spacecraft move together in groups, you only need to remember the position of one of them to calculate the coordinates of each alien spacecraft as a whole.

In this way, the program only needs to save the survival state of the alien spacecraft, the relative moving position of the current fleet, and the information of players and alien bullets. When it is necessary to detect the collision, read the pixel information in the video memory for comparison, and then deduce which two objects collided at the current time. This method saves a lot of resources compared with storing the information of each object.

si78c is different from other codes. It is essentially a simulation of hardware and assembly code. I hope that through the source code explanation of this article, more people can see the difficulties of programmers in making excellent games with limited resources and the subtlety of code design.

Finally, I would like to thank the author of this project for all he has done. Without his efforts, there would be no this article. If you think this article is good, welcome to share it with more people.

HelloGitHub official account was updated at the first time.

There are more open source projects and treasure projects waiting for you to find.