It is inevitable that there are access hotspots in the business, and redis will also encounter this problem. However, how to find the hot key has been perplexing many users. Redis4 0 has brought us many new features, including LFU based hot key discovery mechanism.

Least Frequently Used - referred to as LFU, which means Least Frequently Used. It is redis4 0 adds a new type of memory eviction strategy. From the literal meaning of LFU, we can easily think of the access frequency of key. However, the initial version of 4.0 was only used for memory eviction, and there was no good record of the access frequency. After some transformation, redis was released in 4.0 Version 3 officially supports the hot key discovery mechanism based on LFU.

Each object in Redis has 24 bits space to record LRU/LFU information:

When these 24 bits are used as LFU, they are divided into two parts:

The maximum value of 8 bits is 255. Is it enough to use only 8 bits to record the access frequency?

For the counter, redis uses a trick method. The counter is not a simple linear counter, but a logarithmic counter based on probability. The algorithm is as follows:

Including LFU_INIT_VAL is 5. Let's look at the probability distribution diagram and have a more intuitive understanding. Take the default server lfu_ log_ Take factor = 10 as an example: 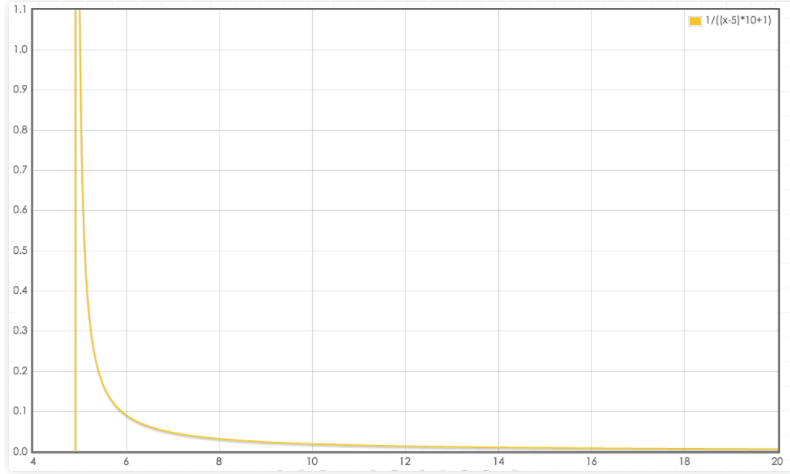 It can be seen from the above figure that the larger the counter, the smaller the probability of increase. 8 bits is enough to record a high access frequency. The following table shows the server with different probability factors lfu_ log_ Correspondence between factor and access frequency counter:

That is, the default server lfu_ log_ When the factor is 10, the counter of 8 bits can represent the access frequency of 1 million.

In the counter growth function LFULogIncr, we can see that with the increase of key traffic, the counter will eventually converge to 255, which brings a problem. If the counter only grows without attenuation, it will not be able to distinguish hot keys.

If the default value is 1, that is, if there is no access within N minutes, the counter will be reduced by N.

Probability factor and attenuation factor can be configured. It is recommended to use the default value of redis:

After introducing the LFU algorithm, the next step is the hot key discovery mechanism we are concerned about.

The core is to update the access time and counter represented by the 24 bits field of the LFU every time the key is read and written, so that each key can obtain the correct LFU value:

So how do users get access frequency? redis provides the OBJECT FREQ subcommand to obtain LFU information. However, it should be noted that the memory eviction policy should be set to allkeys LFU or volatile LFU first, otherwise an error will be returned:

Underlying algorithm: use the scan command to traverse all keys, and then obtain the access frequency through OBJECT FREQ and sort to get the hot key.

redis 4.0.3. It also provides the redis cli hotspot key discovery function. When redis cli is executed, you can add the -- hotkeys option. An example is as follows:

You can see that the hot key s are in the top.

Anyone familiar with Redis knows that it is single threaded. Therefore, be very careful when using some commands with time complexity of O(N). The process may be blocked if you are not careful, resulting in a jam in Redis.

How to choose between meeting the demand and Redis Caton caused by the existence? Facing this dilemma, Redis provided us with a solution in version 2.8 - scan command.

Compared with the keys command, the scan command has two obvious advantages:

These two advantages help us solve the above problems, but the scan command is not perfect. The results it returns may be repeated, so the client needs to redo. Scan command

The summary has the following characteristics:

It mainly discusses how scan works from the perspective of underlying structure and source code.

Redis uses the Hash table as the underlying implementation for the reason that it is efficient and easy to implement. When it comes to Hash tables, the first reaction of many Java programmers is HashMap. Yes, the storage structure of redis's underlying key is an array + linked list structure similar to HashMap. The array size of the first dimension is 2n (n > = 0). Each expansion doubles the length of the array.

The scan command is to traverse this one-dimensional array. The cursor value returned each time is also the index of this array. The limit parameter indicates how many array elements are traversed, and the qualified results attached under these elements are returned. Because the size of the linked list attached to each element is different, the number of results returned each time is also different.

For the traversal order of the scan command, we can use a small chestnut to take a specific look.

There are three key s in our Redis. We only traverse the elements in one-dimensional array at a time. As shown above, the traversal order of the SCAN command is

This order looks strange. It's easier for us to understand by converting it into binary.

We find that every time this sequence is high-order plus 1. Ordinary binary addition is to add and carry from right to left. This sequence is added and carried from left to right. This is also confirmed in the source code of redis.

In the dictScan function of the dict.c file, the cursor is processed as follows

It means to invert the cursor, add one, and then invert it, which is what we call the "high-order plus 1" operation.

You may have questions here. Why do you use this order for traversal instead of the normal order of 0, 1, 2... Because you need to consider the expansion and contraction of the dictionary during traversal (you have to admire the comprehensiveness of the developers).

Let's take a look at how the SCAN traversal will be performed when capacity expansion occurs. The original array has four elements, that is, the index has two bits. At this time, it needs to be expanded into three bits and rehash.

All elements originally attached to XX are assigned to 0xx and 1xx. In the figure above, when we are about to traverse 10, dict rehash. At this time, the scan command will traverse from 010, while 000 and 100 (the elements hitched under 00) will not be traversed again.

Let's look at the shrinkage. Suppose that dict shrinks from 3 bits to 2 bits. When it is about to traverse 110, dict shrinks, and scan will traverse 10. At this time, the elements attached under 010 will be iterated, but the elements before 010 will not be iterated. Therefore, some repeated elements may appear during volume reduction.

Rehash is a complex process. In order not to block Redis processes, it adopts a progressive rehash mechanism.

In redis's dictionary structure, there are two hash tables, a new table and an old table. During rehash, redis gradually migrates the elements in the old table to the new table. Next, let's take a look at the source code of rehash operation of dict.

Through comments, we can see that rehash is migrated based on bucket. The so-called bucket is actually the element of the one-dimensional array we mentioned earlier. Migrate one list at a time.