If value is an integer, you can also use the INCR command to perform atomic auto increment operation on it, which means that multiple customers can operate on the same key in time, which will never lead to competition:

For strings, there is another interesting GETSET. Its function is the same as its name: set a value for the key and return the original value:

This is convenient for setting and viewing some keys that need to be counted at intervals. For example, whenever the system is entered by the user, you use the INCR command to operate a key. When statistics are needed, you use the GETSET command to re assign the key to 0, so as to achieve the purpose of statistics.

We can start from the source adlist H / listnode to see its definition:

It can be seen that multiple LISTNODES can form a two-way linked list through prev and next pointers:

Although only multiple listNode structures can be used to form a linked list, adlist If you use the H / list structure to hold the linked list, it will be more convenient to operate: 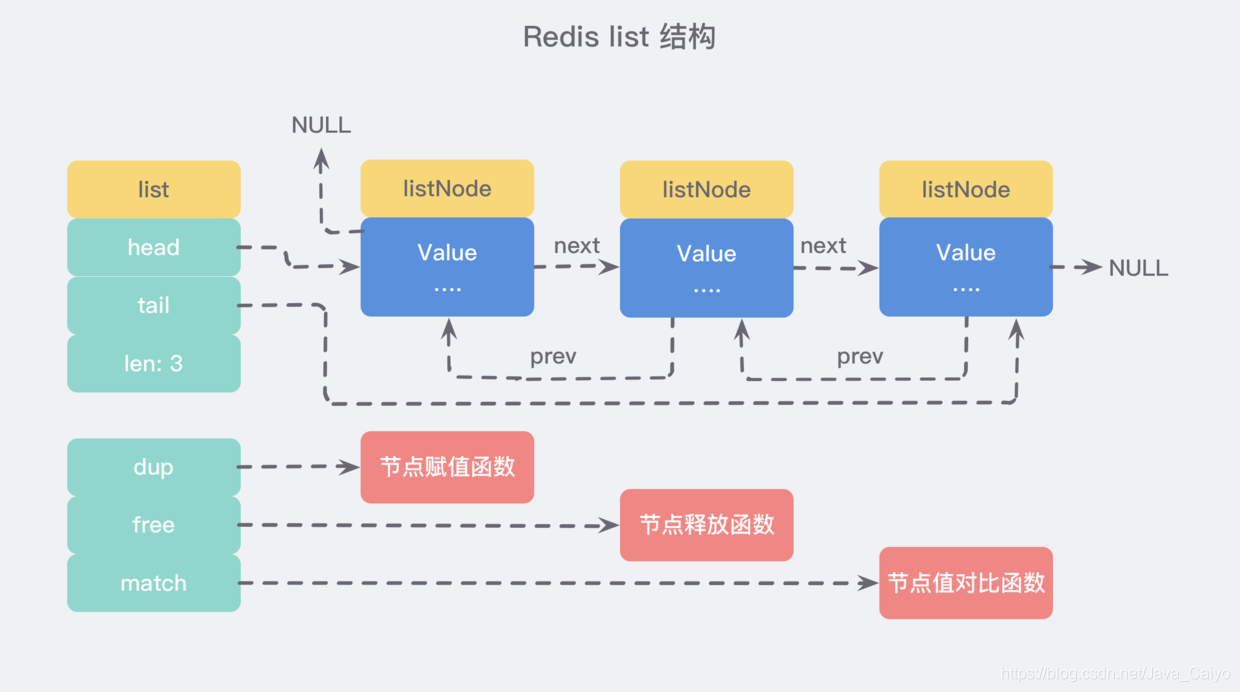 Queue is a first in first out data structure, which is often used for message queuing and asynchronous logical processing. It will ensure the access order of elements:

Stack is a first in and last out data structure, just opposite to queue:

The dictionary in Redis is equivalent to the HashMap in Java, and its internal implementation is almost similar. It solves some hash conflicts through the chain address method of "array + linked list". At the same time, this structure also absorbs the advantages of two different data structures. The source code is defined as dict.h/dictht:

As can be seen from the above source code, in fact, the dictionary structure contains two hashtables. Generally, only one hashtable is valuable. However, when the dictionary is expanded or shrunk, it is necessary to allocate a new hashtable and then move it gradually (the reasons are described below).

The expansion of large dictionaries is time-consuming. It is necessary to re apply for a new array, and then re attach all the elements in the linked list of the old dictionary to the new array. This is an O(n) level operation. As a single thread, Redis can hardly bear such a time-consuming process. Therefore, Redis uses progressive rehash for small-step relocation:

Progressive rehash will retain the old and new hash structures while rehash. As shown in the above figure, two hash structures will be queried at the same time during query, and then the contents of the old dictionary will be gradually migrated to the new dictionary in subsequent scheduled tasks and hash operation instructions. When the relocation is completed, a new hash structure will be used instead.

② Conditions for expansion and contraction

When the hash table becomes more and more sparse because the elements are gradually deleted, Redis will shrink the hash table to reduce the space occupation of the first dimensional array of the hash table. The condition used is that the number of elements is less than 10% of the array length, and whether Redis is doing bgsave will not be considered for volume reduction.

Hash also has disadvantages. The storage consumption of hash structure is higher than that of a single string. Therefore, whether to use hash or string needs to be weighed again and again according to the actual situation:

① Basic use of set

Since the structure is relatively simple, let's take a look at how it is used:

This may be the most distinctive data structure of Redis. It is similar to the combination of SortedSet and HashMap in Java. On the one hand, it is a set to ensure the uniqueness of internal values. On the other hand, it can give each value a score value to represent the weight of sorting.

Its internal implementation uses a data structure called "jump table". Due to its complexity, it is good to simply mention the principle here:

Imagine that you are the boss of a start-up company. At the beginning, there are only a few people, and everyone is on an equal footing. Later, with the development of the company, there were more and more people, and the team communication cost gradually increased. The team leader system was gradually introduced to divide the team, so some people were both employees and team leaders.

Later, the scale of the company further expanded, and the company needs to enter another level: Department. Therefore, each department will elect a minister from the group leader.

Think about your current geographical location: Asia > China > a province > a city >... That's such a structure!

Skip list is a randomized data structure, which was proposed by William Pugh in his paper Skip lists: a probabilistic alternative to balanced trees. It is a hierarchical linked list structure comparable to the balanced tree - operations such as finding, deleting and adding can be completed in logarithmic expected time. The following is a typical example of a skip list:

In the previous article, we mentioned that among the five basic structures of Redis, there is a data structure called zset with sequence table, which is similar to the combination of SortedSet and HashMap in Java. On the one hand, it is a set that ensures the uniqueness of internal values, and on the other hand, it can give each value a sorting weight value score to achieve the purpose of sorting.

1) Why use jump tables

First of all, because zset supports random insertion and deletion, it is not suitable to use arrays to implement it. As for sorting, we can easily think of tree structures such as red black tree / balanced tree. Why doesn't Redis use such structures?

Based on the above considerations, Redis adopts the structure of jump table after making some improvements based on William Pugh's paper.

2) The essence is to solve the problem

However, if we add a pointer between every two adjacent nodes to point to the next node, as shown in the following figure:

In this way, all new pointers are connected into a new linked list, but it contains only half of the original data (3 and 11 in the figure).

Now let's assume that when we want to find data, we can find it according to this new linked list. If we encounter a node larger than the data to be found, we can go back to the original linked list for search. For example, we want to find 7, and the search path is along the direction pointed by the red pointer marked in the figure below:

This is a slightly extreme example, but we can still see that through the newly added pointer search, we no longer need to compare each node on the linked list one by one. In this way, the number of nodes to be compared after improvement is about half of the original.

In the same way, we can continue to add a pointer to every two adjacent nodes on the newly generated linked list to generate the third layer linked list:

In this new three-tier linked list structure, we try to find 13. The first comparison along the top-level linked list is 11. It is found that 11 is smaller than 13, so we know that we only need to continue searching after 11, so we skip all the nodes in front of 11 at once.

It is conceivable that when the linked list is long enough, such a multi-layer linked list structure can help us skip many lower nodes, so as to speed up the efficiency of search.

However, this method has great problems in inserting data. After a new node is inserted, the strict 2:1 correspondence of the number of nodes in the upper and lower adjacent linked lists will be disrupted. If you want to maintain this correspondence, you must readjust all the nodes behind the newly inserted nodes (including the newly inserted nodes), which will degenerate the time complexity into O(n). Deleting data has the same problem.

In order to avoid this problem, skiplist does not require strict correspondence between the number of nodes in the upper and lower adjacent linked lists, but randomly selects a level for each node. For example, if the random number of layers of a node is 3, it is linked to the three-layer linked list from layer 1 to layer 3. For clarity, the following figure shows how to form a skiplist through step-by-step insertion: 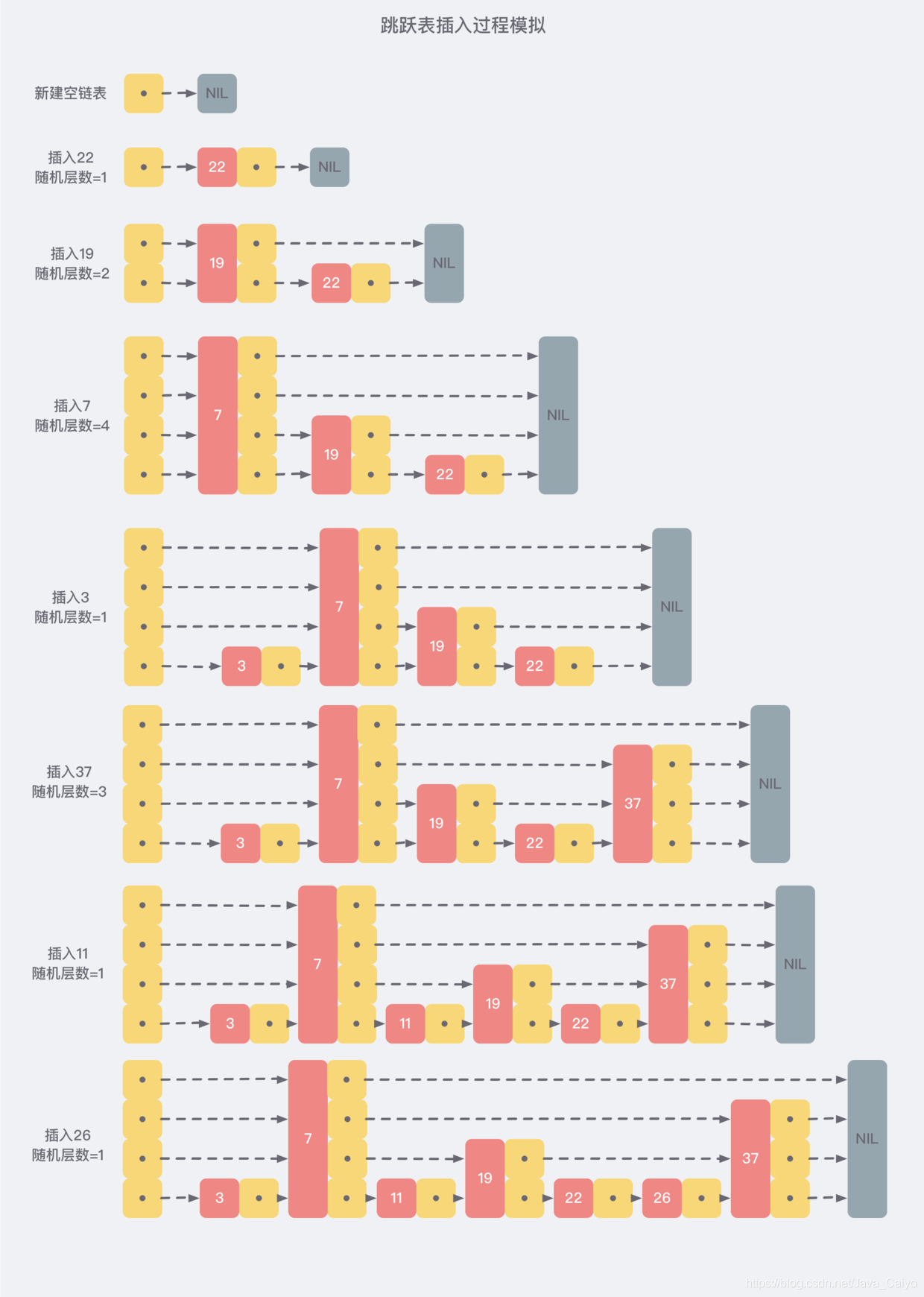 Now let's assume that we find the nonexistent number 23 from the structure we just created, and the search path will be as follows:

Just like the standard jump table drawn at the beginning of the article.

For each newly inserted node, you need to call a random algorithm to assign it a reasonable number of layers. The source code is in t_ zset. Defined in C / zslrandomlevel (void):

By default, the maximum number of layers allowed for Redis jump table is 32, which is zskiplist in the source code_ MAXLEVEL defines that only when Level[0] has 264 elements can it reach level 32, so the definition of 32 is completely sufficient.

This process is relatively simple. In the source code, t_ zset. Defined in C / zslcreate:

That is, after execution, an initialization jump table with the following structure is created:

This is almost the most important piece of code, but the overall idea is also relatively clear and simple. If you understand the principle of the jump list mentioned above, it is easy to sort out several actions that occur when inserting nodes (almost similar to the linked list):

In order to facilitate reading, I put the source code t_ zset. The insertion function defined by C / zsinsert is divided into several parts

Part I: declare the variables to be stored

Part 2: search the insertion position of the current node

Discussion: in an extreme case, all score values in the jump table are the same. Will the lookup performance of zset degrade to O(n)?

From the above source code, we can find that the sorting element of zset not only looks at the score value, but also compares the value value (string comparison)