The Leehom Wang incident has finally received a response. I'll teach you to analyze it in Python

Hello everyone, I'm an old watch ~

Last night, Leehom Wang finally responded 👆， If you want to see the original response, you can drop down to the bottom left corner of the text to read the original.

Today, simply teach you how to process data + visualize his microblog comments, and download the complete code / data. See the end of the article.

On December 15, Wang Leehom suddenly announced his divorce on his microblog, saying that "Liang Lei and my private life is very simple and simple, so we will not respond to any media", ending his eight-year marriage.

Late at night on December 17, Wang Leehom's ex-wife Li Lianglei suddenly sent a document saying that she had been humiliated and cold violence by Wang Leehom and his family for a long time. At the same time, it also exposed unknown events such as Wang Leehom's marital infidelity and chaotic private life, which put Wang Leehom's image of "high-quality male star" in jeopardy for many years.

Once the article was issued, it triggered a heated discussion. Wang Leehom's long-standing image of "high-quality Idol" was questioned. Many netizens left messages under Li Lianglei's microblog, saying, "I'm so sad, I'm so disappointed" and "Wang Leehom's image in my heart collapsed".

I used Python programming to crawl the comments under Wang Leehom's microblog announcing his divorce. As shown in the above figure, the content in the original data is very chaotic. Microblog comments are mixed with a large number of expression packets, topics and "forwarding microblog", etc., which need to be cleaned.

First, the duplicate is removed according to the unique ID of the comment

Then, all microblog comments are counted by hour After obtaining the time-sharing data, you can use Matplotlib to draw a line graph.

The output results are as follows 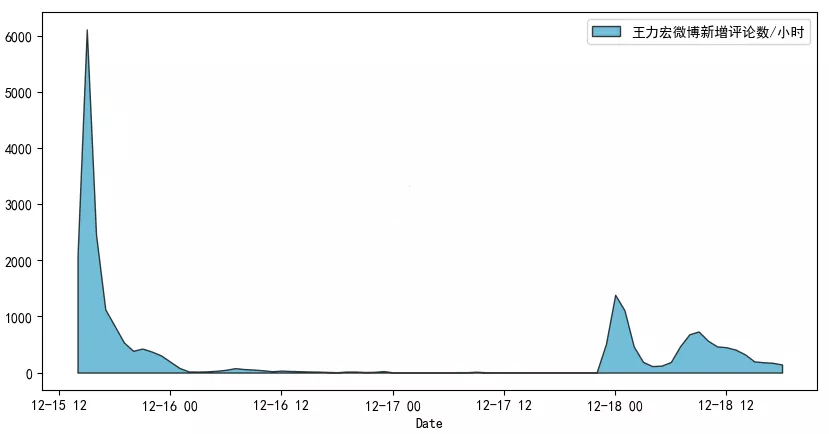 Just released the microblog on the 15th, instantly detonated the comments and quickly searched.

Until 23 o'clock last night, after his ex-wife Li Lianglei sent a document late at night, the masses rushed to open the group.

PS: in addition to the people who eat melons, Infiniti should be the fastest.

At 14:00 on December 16, Infiniti, a luxury car brand, just officially announced that Wang Leehom had become the brand spokesman. At 1:22 a.m. on the 18th, the microblog @ Infiniti China issued a statement. Infiniti decided to terminate the cooperative relationship with Mr. Wang Leehom from now on. Infiniti has only 35 hours from signing to terminating his contract.

What would it look like if we put the number of microblog comments of Wang Leehom and Li Lianglei in one picture? 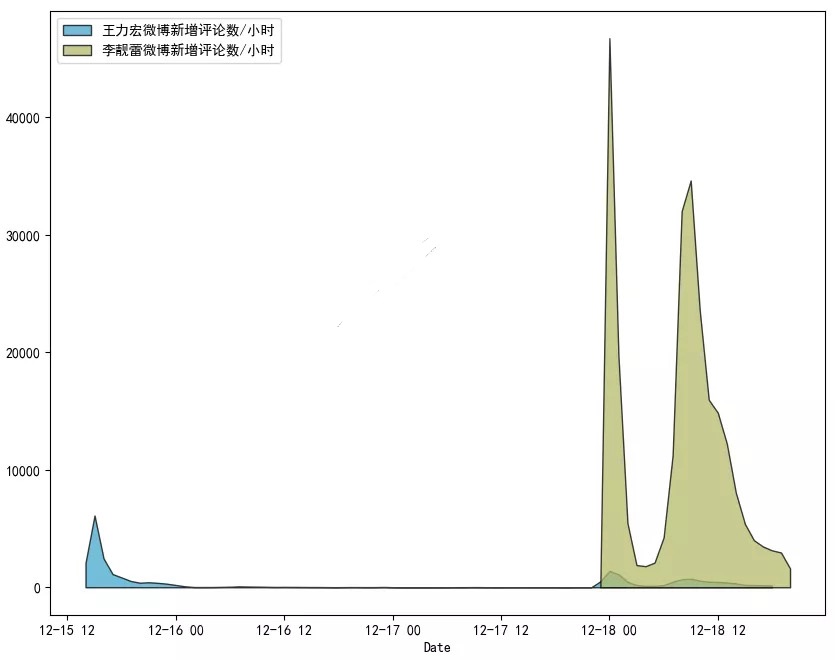 The melon eaters all flocked to Li Lianglei's microblog.

This time we still want to check: what did the masses send after the group?

Many small partners are curious about how to do it. In fact, ps superimposes the line chart above with the generated word cloud layer. If you want to ask Python if it can do layer overlay, my answer is yes, but it's not necessary.

Before making the word cloud picture, all Wang Leehom's microblog comments need to be divided into two parts (before and after his ex-wife's hammer opening). Note that the code below is bounded by "2021-12-17 23:08:00".

Then prepare two masks (from the line chart obtained earlier)

The code of word cloud map is detailed, and we are very familiar with it. Just pay attention to it here.

In this way, the background color of the word cloud image can be set to transparent to facilitate layer superposition. In this way, we can make the figure shown below 👇

Before the exposure of his ex-wife Li Lianglei, Wang Leehom's microblog comments were basically like this: "marriage is for happiness, so is divorce", "lover's total score and score", "respect the second brother's choice".

PS: the angry melon eaters also output a lot of "dirty words", which I excluded in the word cloud chart.

Let's change direction and have fun.

I decided to use the data to explore: what are the favorite expressions of melon Eaters?

I extracted emoji expressions from 100000 comments. First, I extracted all the names of emoji that can be used in microblog comments (only a part is shown here).

Use in to determine whether an emoji is included

The number of emoji occurrences can be obtained: After matching and collecting the expressions in the comments, select the top 8 according to the number of occurrences and make them into a polar graph. It was found that the top 8 expressions were: sadness, tears, sadness, smile, doge, vomiting, single dog and eating melon.

Since his debut, Wang Leehom has been known as a "high-quality Idol". He has a good family background, talent and good looks. There are few negative aspects in his debut for many years. Now it seems that the high-quality skin is just a mask. He chose the best wife, but he made further progress in her tolerance for many years.

As Li Lianglei's long article said, "if your acting career is affected, it is caused by your own choices, not me."