Let's first look at its definition:

"Zero-copy" describes computer operations in which the CPU does not perform the task of copying data from one memory area to another. This is frequently used to save CPU cycles and memory bandwidth when transmitting a file over a network.

The so-called zero copy means that when operating data, there is no need to copy the data buffer from one memory area to another. There is less memory copy, which reduces the execution of cpu and saves memory bandwidth.

At the OS level, zero copy usually refers to avoiding copying data back and forth between user space and kernel space.

The zero copy in netty is different from the zero copy on the OS level mentioned above. Netty's zero copy is completely in the user state (Java level), and its zero copy is more inclined to the concept of optimizing data operations

Suppose we have a protocol data, which consists of a header and a message body, which are stored in two bytebufs, namely:

In code processing, you usually want to combine header and body into a ByteBuf for easy processing. The usual methods are as follows:

As you can see, we have copied the header and body to the new allBuf, which virtually adds two additional data copying operations. So is there a more efficient and elegant way to achieve the same goal? Let's take a look at how CompositeByteBuf implements such requirements

In the above code, we define a CompositeByteBuf object and then call it.

Method combines header and body into a logical ByteBuf, that is:

In the above CompositeByteBuf code, it is worth noting that we call addComponents(boolean increaseWriterIndex, ByteBuf... buffers) to add two bytebufs. The first parameter is true, which means that when a new ByteBuf is added, the writeIndex of CompositeByteBuf is automatically incremented.

In addition to directly using the CompositeByteBuf class above, we can also use unpooled Wrappedbuffer method, which encapsulates the compositebytebuffer operation at the bottom, so it is more convenient to use:

We have a byte array. We want to convert it into a ByteBuf object for subsequent operations. The traditional method is to copy this byte array into ByteBuf, that is:

Obviously, there is also an additional copy operation in this way. We can use the relevant methods of Unpooled to wrap the byte array and generate a new ByteBuf instance without copying. The above code can be changed to:

Through unpooled Wrappedbuffer method to wrap bytes into an UnpooledHeapByteBuf object, and there will be no copy operation in the packaging process That is, the generated ByteBuf object shared the same storage space as the bytes array, and the modification of bytes will also be reflected in the ByteBuf object

Slice method without parameters is equivalent to buf slice(buf.readerIndex(), buf. Readablebytes()), which returns the slice of the readable part in buf slice(int index, int length) method is relatively flexible. We can set different parameters to obtain slices in different regions of buf

There is no copy operation in the process of generating header and body with slice method. The header and body objects actually share different parts of byteBuf storage space internally Namely:

First, let's start with the most basic Java IO Assuming that we want to realize the function of copying a file, using the traditional method, we have the following implementation:

The above is a typical code implementation of reading and writing binary files Needless to say, we all know that in the above code, we constantly read fixed length data from the source file into the temp array, and then write the contents of temp into the destination file. Such copying operation does not have much impact on small files, but if we need to copy large files, frequent memory copying operations will consume a lot of system resources, Let's take a look at how FileChannel using Java NIO implements zero copy:

It can be seen that after using FileChannel, we can directly copy (transfer to) the contents of the source file to the destination file without using an additional temporary buffer to avoid unnecessary memory operations. Let's take a look at how FileRegion is used to realize zero copy transmission of a file in Netty:

You can see that the first step is to open the file through RandomAccessFile, and then Netty uses DefaultFileRegion to encapsulate a FileChannel, that is:

The "zero" of zero copy means that the number of copies of data between user state and kernel state is zero.

Many web applications will provide users with a large amount of static content, which means that a lot of data will be transmitted to users intact through socket s after being read out from the hard disk. This operation may not seem to consume much CPU, but it is actually inefficient.

Every time data passes through the user kernel boundary, it will be copied, which will consume CPU and RAM bandwidth. Therefore, you can use a technology called zero copy to remove these unnecessary copies.

Unfortunately, when the requested data size is much larger than the kernel buffer size, this method itself becomes a performance bottleneck. Because data needs to be copied many times between disk, kernel buffer and user buffer (the whole buffer is filled each time).

Transfer a file to another program through the network. Within the OS, the copy operation undergoes four context switches between user mode and kernel mode, and even the data is copied four times,
The specific steps are as follows: 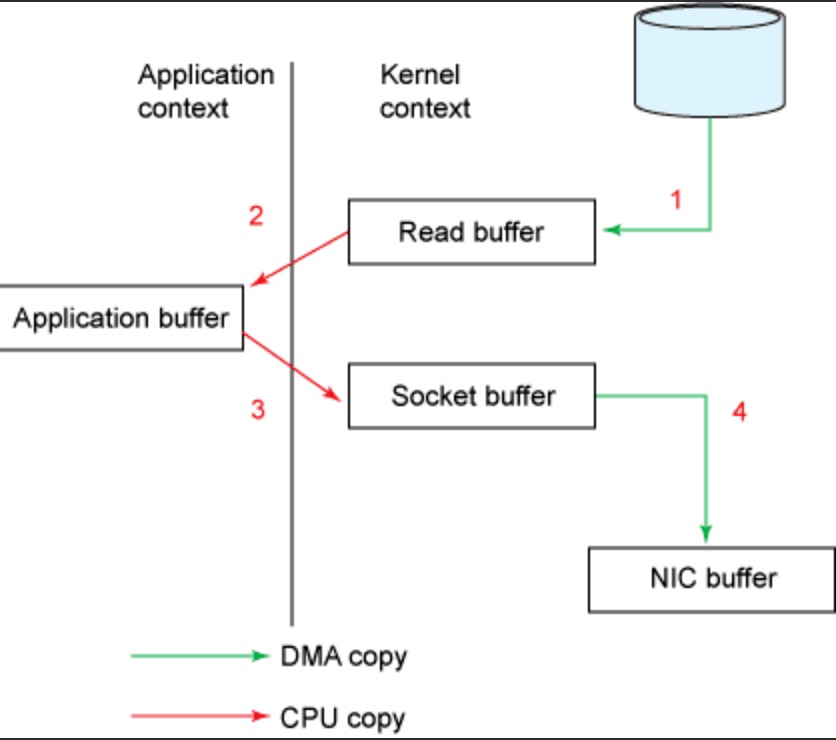 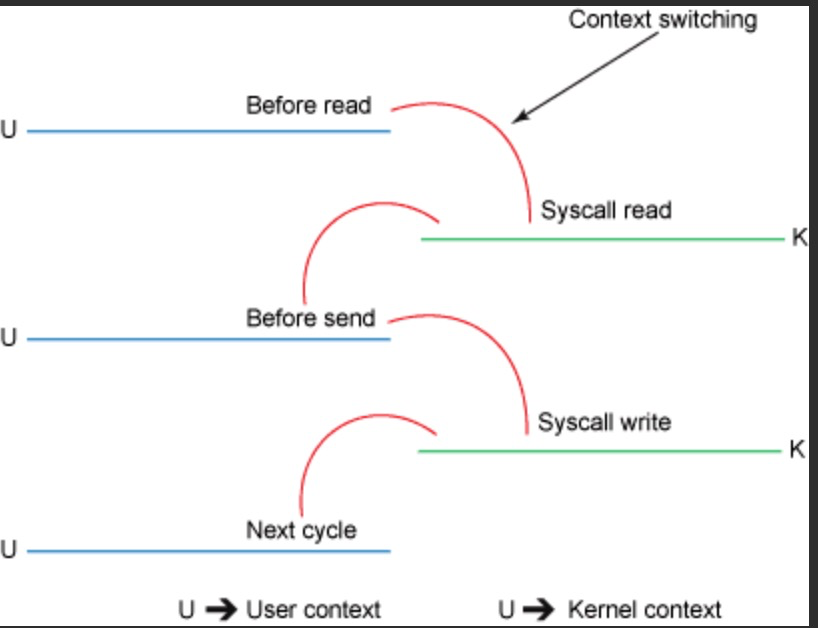 In Linux kernel 2.4 and above (such as linux 6 or centos 6 or above), the developer modified the socket buffer descriptor to enable the network card to support gather operation and further reduce the data copy operation through the kernel. This method not only reduces the context switch, but also eliminates the data copy related to the CPU. The user level usage method has not changed, but the internal principle has changed:

The transferTo() method causes the file contents to be copied to the kernel buffer, which is completed by the DMA engine. No data is copied to the socket buffer. Instead, the socket buffer is appended with some descriptor information, including the location and length of data. Then the DMA engine transfers data directly from the kernel buffer to the protocol engine, which eliminates the only copy operation that needs to occupy CPU. 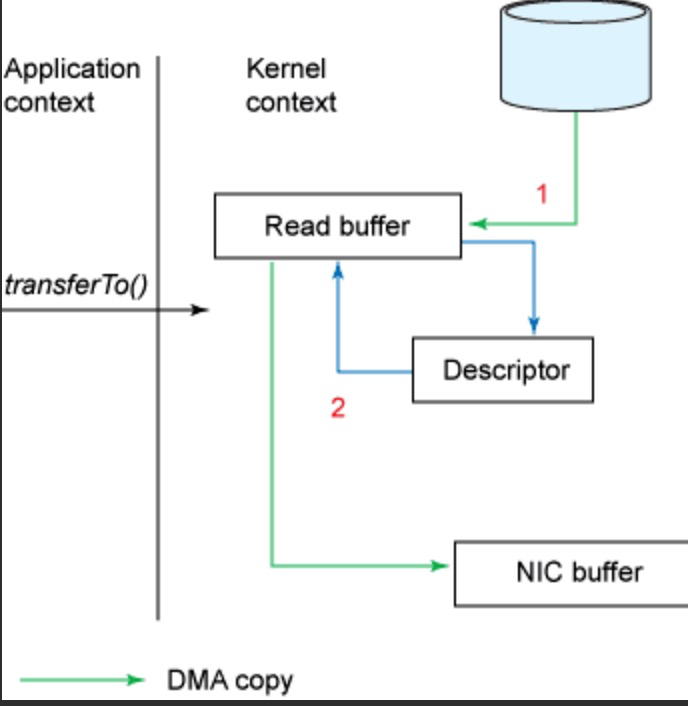 Transfer a file from the client to the server through the network: