Spent a few days sorting out the C language knowledge points in STM32. Beginners must watch the old bird review

A junior partner of SCM asked me to recommend C language books. Because the basis of C language is relatively poor, I want to learn C language again and learn SCM again. I had this idea when I first learned SCM before. In fact, C language can be learned while learning MCU. In some routines of learning MCU, if you encounter C language knowledge you don't understand, check the relevant knowledge points, so that you will be more impressed.

The following is a list of some important C language knowledge points in STM32. Beginners can read them several times, most of which have been written before. Here you can rearrange them and analyze and explain them in more detail. You can read the attached links.

Assertions are used to capture these assumptions in code. Assertions can be regarded as a high-level form of exception handling.

Note that assert() is a macro, not a function.

This is used to check the validity of the parameters passed in by the function. Assert in STM32_ Param is not used by default, that is:

If you want to use, you need to define USE_FULL_ASSERT macro, and you need to implement it yourself assert_failed function . In particular, if you use STM32CubeMX to generate code, it will be in main C generation:

Here are some examples of assert application:

Here, the variable c as the denominator cannot be equal to 0. If we enter 2 0, what is the result? As a result, the program will jump:

There are only a few lines of code in this example, and we can quickly find that the reason for the program error is that the value of variable c is 0. However, if the amount of code is large, can we find the problem point so quickly?

At this time, assert() comes in handy. In the above code, we can use a = b / c; Add assert(c) before this code; This code is used to judge the validity of variable C. At this time, compile and run again, and the result is: 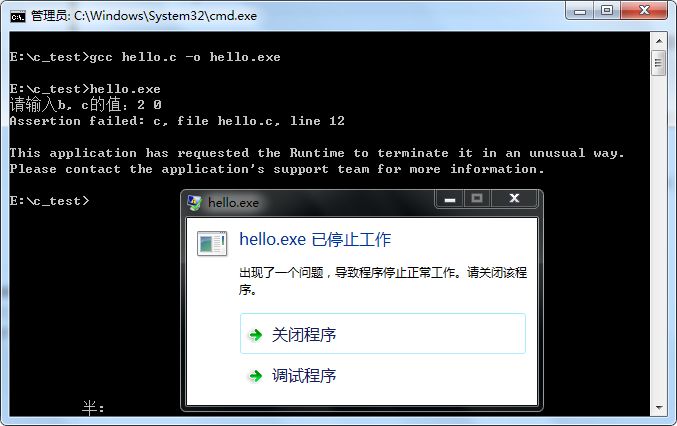 It can be seen that the program will print an error message in the standard error stream at the same time:

This message contains some information that is very helpful for us to find the bug: the problem lies in the variable c, in hello c line 12 of the document. In this way, we can quickly locate the problem point.

At this time, careful friends will find that in our introduction to assert(), there is a statement: if the value of the expression is false, the assert() macro will call_ assert function Print an error message in the standard error stream and call abort() (the prototype of the abort() function is in stdlib H (in the header file) function terminates the program.

Therefore, for our example, our assert() macro can also be replaced by the following code:

In this way, it can also give us hints: 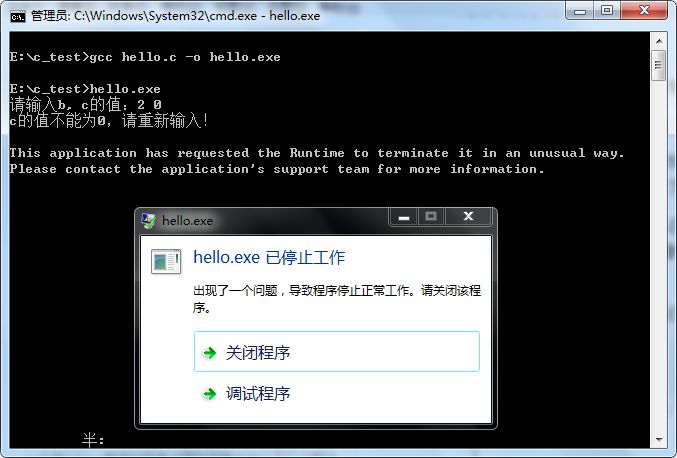 However, using assert() has at least several benefits:

1) It can automatically identify the file and the line number of the problem.

2) It can be turned on or off without changing the code assert mechanism (whether to open or not is related to the size of the program). If you think you have eliminated the bug of the program, you can write the following macro definition in include assert In front of the position of H:

Related articles: [C language note] how to use assert()?

#The error instruction causes the preprocessor to issue an error message and interrupts the compilation process.

This sample code is very simple when RX_ BUF_ When the value of IDX macro is not 0 ~ 3, an error message will be output through #error instruction in preprocessing stage:

Let's take a look at the compilation results:

#The general format of if is as follows

If the integer constant expression is true, the program segment 1 will be executed, and so on. The last #endif is the end flag of #if.

#ifdef is used to judge whether a macro is defined. If the macro is already defined, execute the following code. The general format is as follows:

#ifndef is the opposite of #ifdef. It is used to judge whether a macro has not been defined.

Defined is used to determine whether a macro is defined! Defined is the opposite of defined. In this way #if defined can achieve the same effect as #ifdef. For example:

Further, some closer causal processing can be constructed, such as:

The purpose of this paragraph is to ignore some gcc warnings# pragma command The command sets in are different in different compilers. When using, you must consult the documentation of the compiler used to understand which commands are available and the functions of these commands.

Let's take a brief look at the common usage of the #pragma command.

We can use #pragma pack to change the alignment of the compiler:

We use the #pragma pack instruction to specify the number of bytes to align. example: 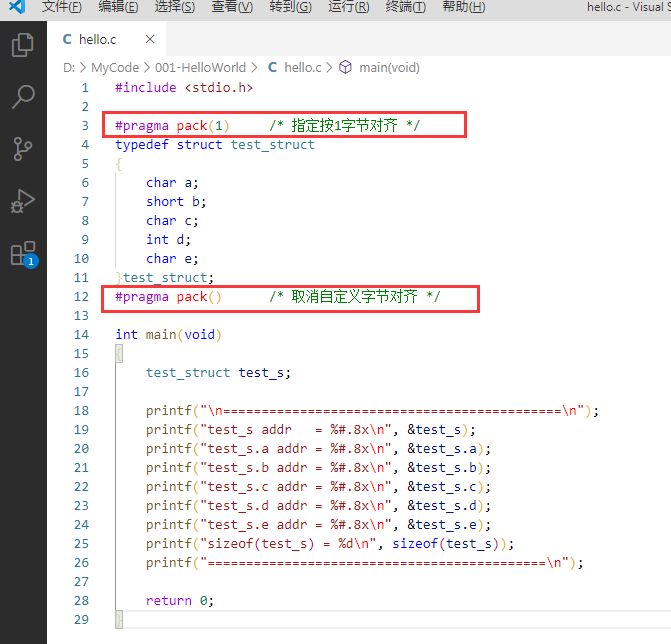 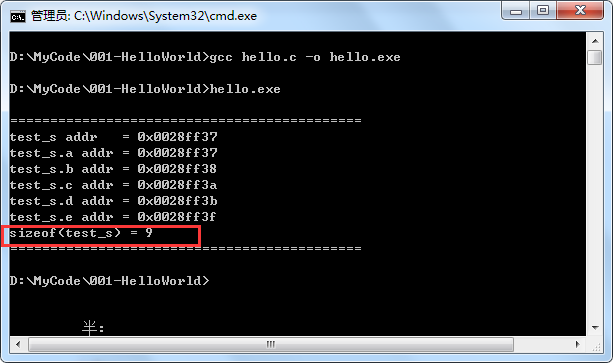 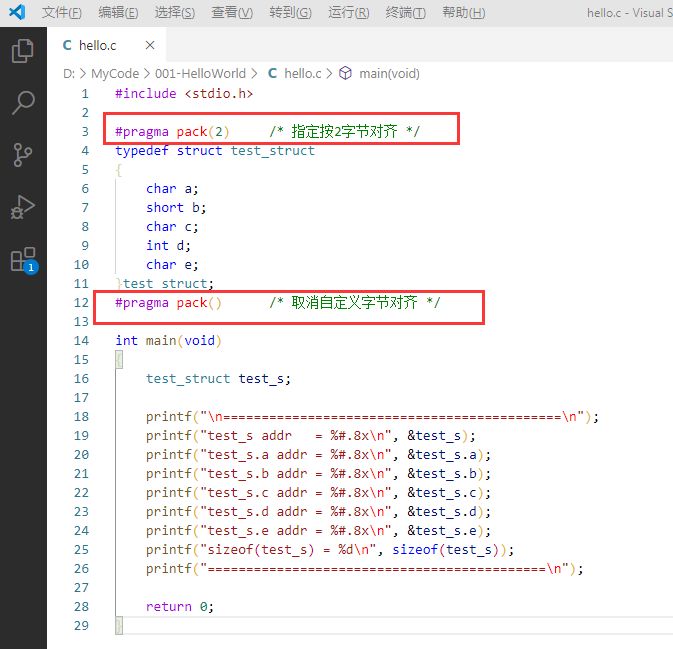 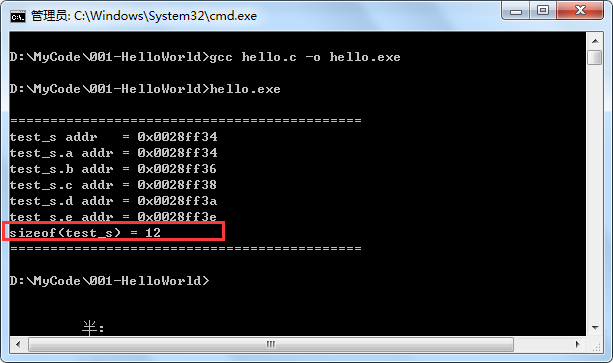 It can be seen that the specified number of aligned bytes is different, and the results are also different. What's the use of specifying alignment? It probably avoids the code hidden dangers caused by compiler differences in the migration process. For example, the default alignment of the two compilers is different, which may lead to some bug s.

This instruction is used to output some useful prompt information during preprocessing, such as: 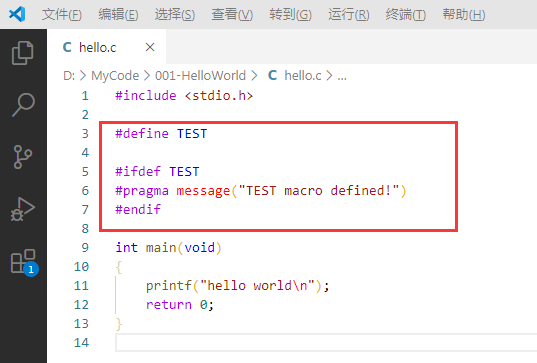 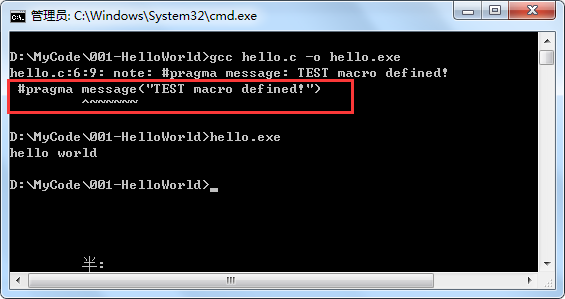 As mentioned above, we can usually add similar information to some conditional compilation blocks, because when some macros are selected more, the code may be confused. But now some compilers and editors will make some obvious distinctions between these situations. For example, the background color of which code is not used will be gray.

This directive allows you to selectively modify compiler warnings.

Let's know so much about this instruction for the time being. Just know that there is such a thing.

There are still many uses of #pragma instruction, but it is popular. It is not listed here for the time being. Interested friends can learn by themselves.

After adding extern "C", the compiler will be instructed to compile this part of the code in C language (not c + +). Because the compilation processing of functions by C and C + + compilers is not exactly the same, especially for C + +, it supports function overloading. The compiled functions are generally named by function name and formal parameter type.

When we usually use macro with parameters, the macro parameters in the string are not replaced. For example: 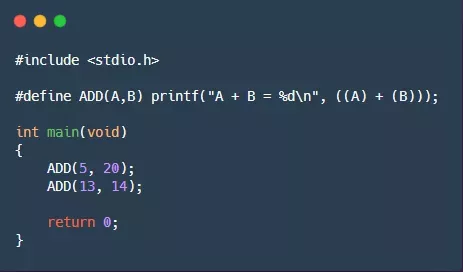 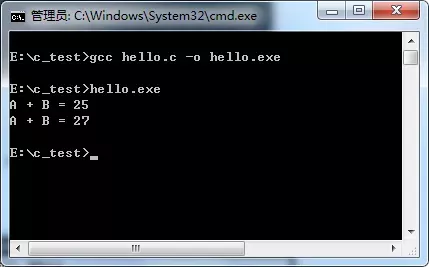 However, we expect the output to be:

What should I do? In fact, C language allows macro parameters to be included in strings. In class function macros (macros with parameters), # sign is used as A preprocessing operator to convert tokens into strings. For example, if A is A macro parameter, then #A is the parameter name converted to the string "A". This process is called stringing. The following procedure demonstrates this process: 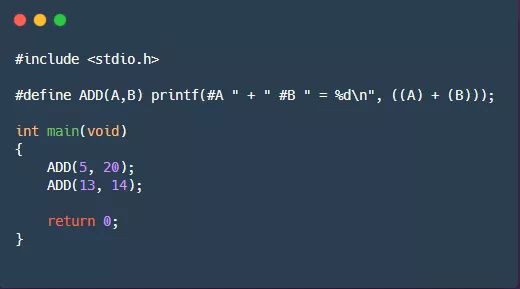 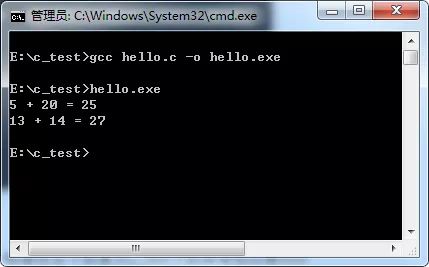 That's what we want. Therefore, # operators can complete the process of stringing.

Like the # operator, ## operator can be used in the replacement part of a class function macro (macro with parameters)## Operator can combine two tokens into one token. For example, you can do this:

The macro XNAME(4) will then expand x4. The following procedure demonstrates ## operator usage: 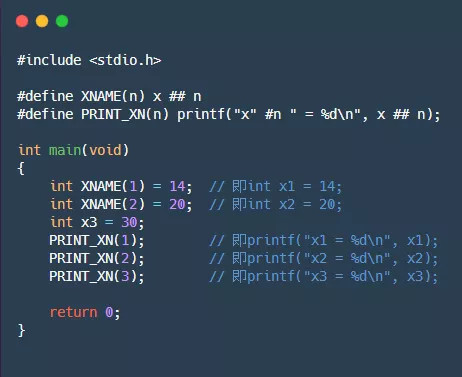 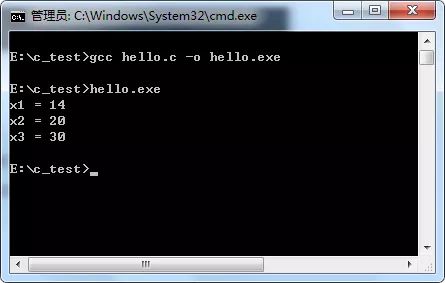 In fact, ## operators do not seem to be very convenient here, but make us feel uncomfortable. However, using ## operators can sometimes improve encapsulation and program readability.

Related articles: You may not have used these two C operators, but they are very useful~

It is often used in some underlying structure members_ IO, _ O, _ I modify these three macros, such as:

These three macros are actually the replacement of volatile, that is:

It seems very complicated, but it can be configured according to the specification. Although the method of directly configuring registers is rarely used in practical applications, it also needs to be mastered that registers can be directly manipulated in some special places, such as interrupt.

In embedded programming, it is often necessary to configure some registers. In some cases, it is necessary to change a bit or several bits in a byte, but do not want to change the original value of other bits. At this time, bitwise operator can be used for operation. For example, if there is an 8-bit TEST register:

In this case, we can borrow bitwise operators for configuration.

Therefore, it can be set as:

The meaning is: the upper 7 bits of the TEST register remain unchanged, and the lowest bit becomes 1. In actual programming, it is often rewritten as:

This writing method can simplify the code to a certain extent. It is a common programming style of C language. There is another operation method for setting a bit of the register. The above equivalent methods are as follows:

If you want to set the first bit to 1, move it to the left.

Similarly, to clear 0 for the lower 4 bits of TEST and keep the upper 4 bits unchanged, the following configuration can be carried out:

This is used in the macro definition. This usage is not used in the standard library of STM32. There are a lot of usage examples in the HAL library, such as:

Here is an example to analyze the usage of do {}while(0):

What's wrong with this macro print?

When we use it with if and else, there will be such a use case:

A syntax error will be reported. Why?

Similarly, we can first take a look at our demo code. After preprocessing, the corresponding Macro code Will be converted why. For example: 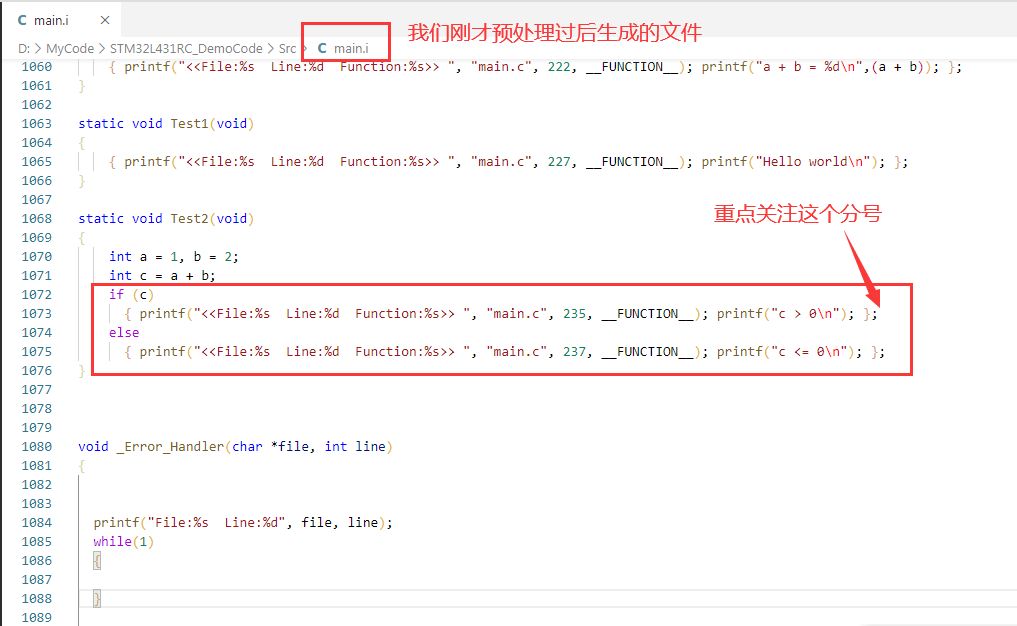 Here we can see that our if and else structure codes are replaced with the following forms:

There are several ways to solve this problem. The first method is to remove the semicolon. The code becomes:

The second method is to use DBG after if_ Printf always adds {} when printing and debugging. The code becomes: 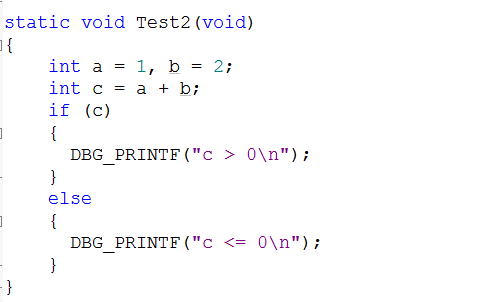 The above two methods can be compiled and run normally.

However, in our C language, each statement often ends with a semicolon; Moreover, some people are used to not enlarging parentheses when there is only one sentence after if judgment; And the DBG we created_ The purpose of the printf macro function is for benchmarking printf function , the use of the printf function plus the semicolon is no problem anywhere.

For these reasons, it is necessary for us to conduct further research on our DBG_PRINTF macro function for a transformation.

The do here While loop Circulatory body Executing only once has the same effect as not adding a loop. Moreover, the above problems can be avoided. Preprocessing file:

In our macro function entity, while(0) is not followed by a semicolon, and a semicolon is added when actually calling, which is not only in line with the habit of ending semicolons in C language statements, but also in line with do Syntax rules for while.

Using do{}while(0) to encapsulate macro functions may make many beginners unaccustomed, but it must be admitted that this is indeed a very common method.

Let's take a look at the example of static modifying variables in functions:

It can be seen that every time the function is called, the ordinary local variables are reassigned, while the static modified variables keep the value of the last call unchanged, that is, they are initialized only once.

extern is simple to use. It is used to declare global variables and declarations shared by multiple modules External function.