Hello, I'm a fisherman from Go school. Today, let's talk about the implementation of workflow based on directed acyclic graph

Workflow is a model that organizes and executes the work in the workflow according to certain rules. For example, overtime application and leave application in common administrative systems; The problem to be solved by workflow is to realize a specific goal and let multiple participants automatically transfer information according to a certain reservation rule.

However, the goal of this article is to introduce its implementation idea, so the example section will take the process of dressing as an example.

Let's take the event of getting up and dressing in the morning as an example to explain the implementation of directed acyclic graph. The events included in the dressing process include wearing underwear, pants, socks, shoes, watches, shirts, coats, etc. Some of these events must wear certain clothes before wearing other clothes (such as socks before shoes). Some events can be worn in any order (for example, socks and trousers can be worn in any word order). As shown in the figure: 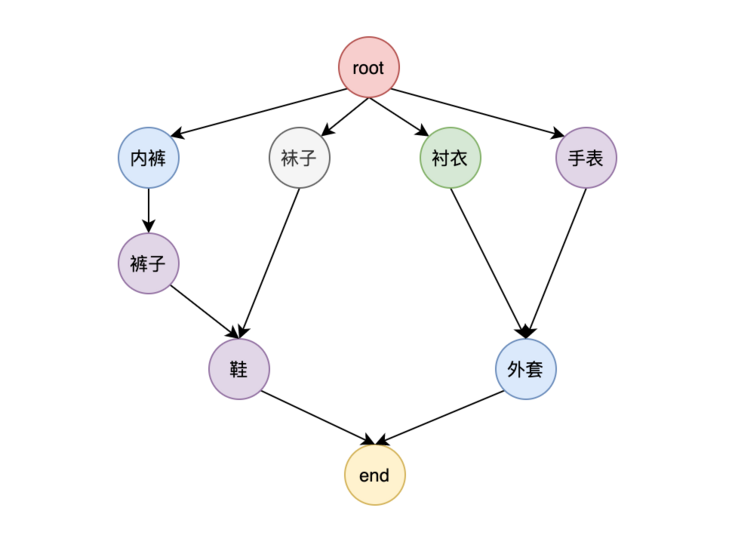 As can be seen from the above figure, there is no interdependence between wearing underwear, socks, shirts and watches, which can be executed concurrently. Shoes can only be worn after the pants and socks on which they depend are worn. Let's take a look at how to implement such a directed acyclic graph workflow.

According to the above figure, we can see that a relatively complete workflow includes start nodes (where to start), edges (which nodes to pass through) and end nodes (where to end). Therefore, we define the structure of workflow as follows:

Edges are used to represent dependencies between two nodes. The edge in a directed graph can also indicate which of the two nodes is the front node and which is the rear node. The post node cannot execute until the task of the pre node is completed. As shown in the figure below: 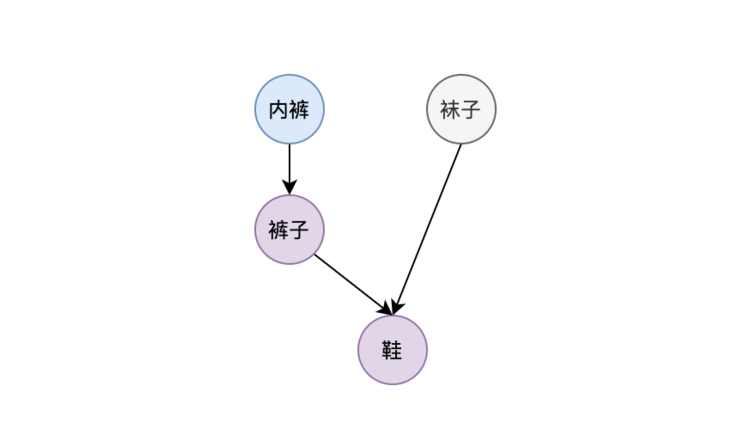 So the representation of the edge is from which node to which node. It is defined as follows: 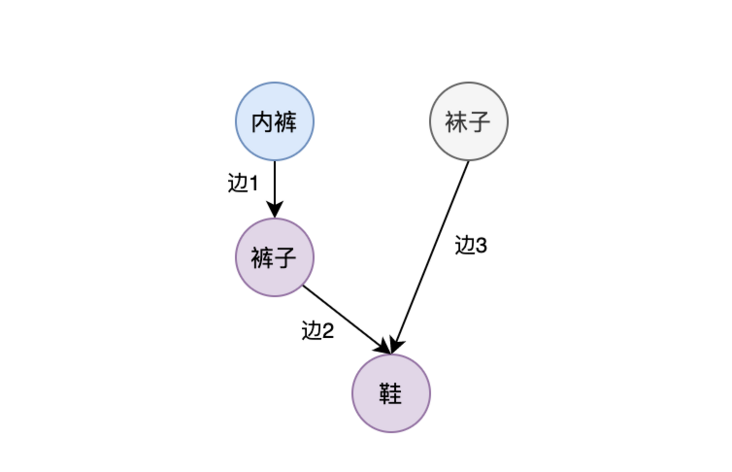 In the node definition, we see that there is a Runnable type. This type is an interface with only one Run(i interface {}) method, which is used to abstract the business logic of the node. So that when the node executes, it can call the Run method of each node uniformly. The interface is defined as follows:

We take the shoe wearing task as an example to implement the interface, which is defined as follows:

With a specific execution task, we can build the task on a node:

With nodes, we need to build edges. Because edges connect two nodes, we define a sock wearing node:

Well, with two nodes, we define the function of the edge to build the two nodes into edges:

In addition, we see a start node and an end node in the workflow. The start node is the root node of the workflow and the trigger point for the execution of the whole workflow. Its Task is to trigger child nodes. There is no specific business logic to execute in all nodes, that is, the Task in this node is nil.

The end node represents that the tasks of the whole workflow have been completed, and signals the caller that the process is over. Therefore, the task logic of this node is to write a message to the done channel of the workflow and let the caller receive the message to unblock:

Well, let's look at the structure definition based on the above elements and how to build a complete workflow and make the workflow work.

First, of course, instantiate a workflow.

Through the above three functions, we can construct the relationship diagram between each node in the workflow. With the diagram, we need to make
The diagram flows. So let's look at the definition of related execution behavior in workflow.

In the workflow execution function, we see that the ExecuteWithContext function of the root node is called. Let's look at the specific implementation of this function.

Most of the logic is simple. Let's focus on the dependencyHasDone() function. This function is used to check whether all the edges on which a node depends have been executed. This is achieved by counting. The specific implementation is as follows:

Let's take the following figure as an example to illustrate how the end node is checked and the dependent front nodes are executed.

First, the root node starts to execute its own ExecuteWithContext method. In this method, the dependencyHasDone function is used to judge whether all the preceding nodes that the node depends on have been executed, but the node has no preceding node, that is, n.Dependency == nil is satisfied and true is returned, so the root node can continue to execute the following logic in ExecuteWithContext. 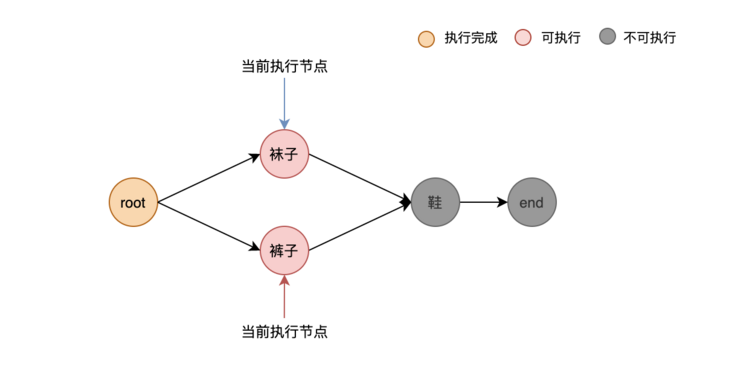 We know that the sock node and pants node depend on only root, that is, there is only one entry edge. When it is executed by itself, it indicates that the root node has finished executing, so the following logic is executed:

It is found that there are 2 edges on which the shoes depend. Now only one item has been completed, so it is in an unenforceable state, so it will be returned directly and will no longer be executed. As shown in the figure below: 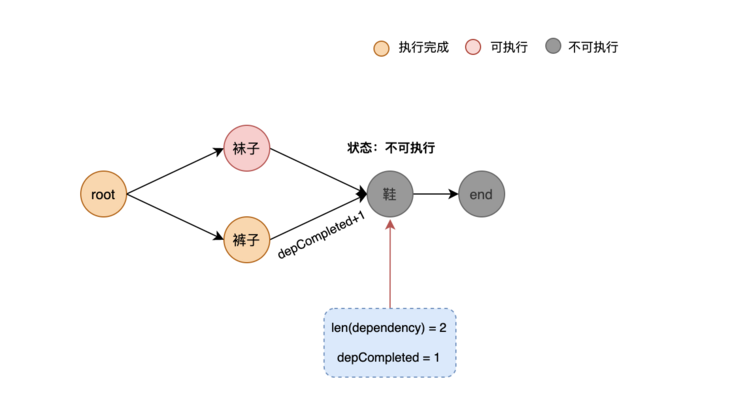 Let's now look at a complete example of the dressing process.

The structure of each Action in the above code can implement the Runnable interface, which will not be repeated here. At this point, we have successfully built the dressing flow chart we saw at the beginning.

3.1 how to transfer data between nodes

We can see that the second parameter in the StartWithContext function of WorkFlow is an interface {} type, which is used to pass parameters to each Node. At the same time, the parameters in the ExecuteWithContext function of Node are also of interface {} type. We can define this parameter as a pointer type. In this way, the content pointed to by the pointer can be changed during the execution of each Node.

3.2 how to terminate the process if there is a node execution error

In a process, if there is an error in the execution of any node, our processing method is to terminate the whole process. That is, the ExecuteWithContext function of the above node has the judgment of the following code:

Let's take a look at the implementation of interruptDone in WorkFlow: