Compared with the traditional retrieval based on literal keywords, semantic retrieval has many advantages and is widely used in question answering and search systems. Today, Xiaobian will take you to complete a semantic retrieval system based on domain pre training and comparative learning SimCSE.

The so-called semantic retrieval (also known as vector based retrieval) means that the retrieval system is no longer confined to the user Query literal itself (such as BM25 retrieval), but can accurately capture the real intention behind the user Query and use it to search, so as to return more accurate results to the user.

The final visual demo is as follows: on the one hand, the vector representation of the text can be obtained; On the other hand, you can do text retrieval, that is, you can get the top-K related documents entered into Query! 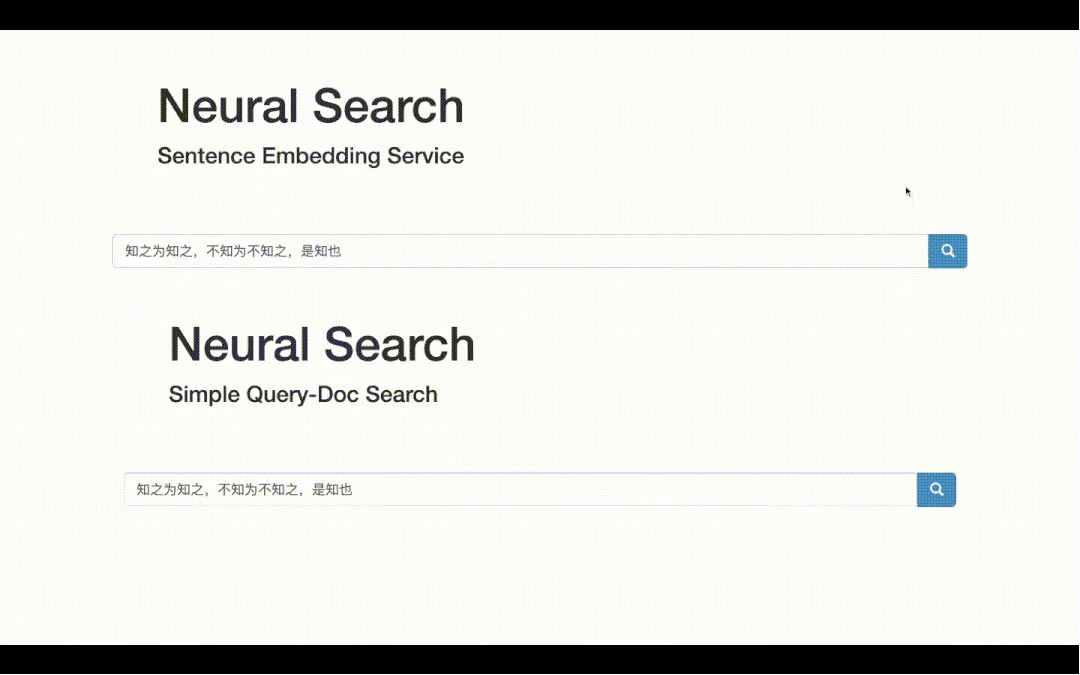 Semantic retrieval, whose underlying technology is semantic matching, is one of the most basic and common tasks of NLP. In terms of breadth, semantic matching can be applied to QA, search, recommendation, advertising and other major directions; From the perspective of technical depth, semantic matching needs to integrate various SOTA models, magic changes of two common frameworks, two towers and interaction, as well as the art of sample processing and various engineering tricks.

Interestingly, when checking the relevant information, I found Baidu Flying oarPaddle NLP has just opened a similar function recently, which can be described as the light of domestic products! Used before Paddle NLP basically covers various NLP applications and SOTA models. It is also very convenient to call. We strongly recommend you to try!

Next, based on Paddle The wheels provided by NLP build a semantic retrieval system step by step. The overall framework is as follows. Due to the limitation of computation and resources, the general industrial search system will be designed into a multi-stage cascade structure, mainly including recall, sorting (Rough sorting, fine sorting, rearrangement) and other modules. 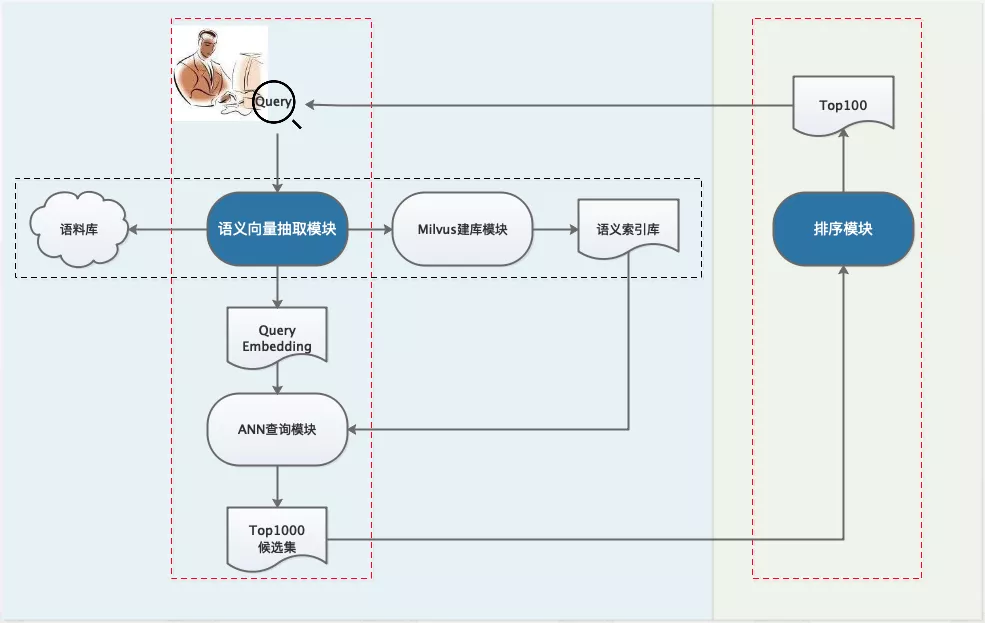 The data comes from a literature retrieval system, which is divided into supervised (small amount) and unsupervised (large amount).

The operating environment is:

For other dependent packages, refer to requirements txt.

As can be seen from the above semantic retrieval technology framework diagram, firstly, we need a semantic model to extract vectors from the input Query/Doc text. Here, SimCSE based on comparative learning is selected. The core idea is to make sentences with similar semantics close to each other in the vector space and sentences with different semantics far away from each other.

Specifically, here, our model training is divided into several steps (the code and corresponding data are introduced in the next section):

3. Fine tune the step 2 model on the supervised literature data set combined with the in batch negatives strategy to obtain the final model for extracting the text vector representation, that is, the semantic model we need for database building and recall.

Because the recall module needs to quickly recall candidate sets from tens of millions of data, the general approach is to realize efficient ANN with the help of vector search engine, so as to realize candidate set recall. Milvus open source tools are used here. For the building tutorial of Milvus, please refer to the official tutorial

Milvus is a domestic high-performance retrieval library, which is similar to Facebook's open source Faiss function.

After building the vector engine according to the Milvus tutorial, you can extract text vectors using the pre training semantic model. Run feature_extract.py, and pay attention to modifying the data source path to build the database.

After running, 10 million text data will be generated and saved as corpus_embedding.npy.

Next, modify config Py, and import the vector generated in the previous step into the Milvus library.

Extracting and inserting vectors may take a long time if the machine resources are not very "rich". It is suggested that a small part of data can be used for function test and rapid perception, and then the whole database can be operated in the real deployment stage.

After the insertion, we can view the vector data through the visualization tool [1] provided by Milvus, which is the ID and vector corresponding to the document.

The purpose of the recall phase is to quickly retrieve the relevant Doc documents that meet the Query requirements from the massive resource database. Due to the amount of computation and the requirements for online delay, the general recall model will be designed in the form of two towers. The Doc tower will build a database offline, and the Query tower will process online requests in real time.

In addition, if you just want to test or deploy quickly, Paddle NLP has also opened source the trained model files, which can be downloaded immediately. The model links are posted here:

The advantages of domain adaptive training have been described in detail in the previous article and will not be repeated. Directly to the code, and the specific functions are marked later.

Two tower model, using ERNIE 1.0 hot start and introduce SimCSE strategy. The training data example is as follows, the code structure is as follows, and the functions of each file are clearly noted later.

For training, evaluation and prediction, run the corresponding scripts in the scripts directory respectively. The trained model can be used to extract the semantic vector representation of text on the one hand, and calculate the semantic similarity of text pairs on the other hand. We only need to adjust the data input format.

Fine tune the supervised data of the model in the previous step. The training data example is as follows. Each line is composed of a pair of text pairs with similar semantics. tab segmentation, and negative samples are derived from the introduction of in batch negatives sampling strategy.

For details about in batch negatives, please refer to the article:

The overall code structure is as follows:

The steps of training, evaluation and prediction are similar to the unsupervised steps in the previous step. You must understand it at a glance!

Having said so much, let's see how the effects of several models are? For matching or retrieval models, the commonly used evaluation index is Recall @K , that is, the ratio of the number of correct results retrieved from the TOP-K results to the number of all correct results in the whole database.

Comparison can be found that first use ERNIE 1.0 do domain adaptive training, then load the trained model into SimCSE for unsupervised training, and finally use in batch negatives to train on supervised data to obtain the best performance.

Finally, it's time to recall. In retrospect, we have trained the semantic model and built the recall library. Next, we just need to search in the library. Code at

Taking ， the impact of the introduction of non-state-owned capital by state-owned enterprises on Innovation Performance -- Based on the empirical evidence of state-owned listed companies in manufacturing industry ， as an example, the retrieval return effects are as follows

The last column of the returned result is the similarity. Milvus uses the European distance by default. If you want to change it to cosine similarity, you can modify it in Milvus's configuration file.

Unlike recall, in the sorting stage, because the scoring set oriented is relatively small, generally only a few thousand levels, more complex models can be used. Here, we use ERNIE -Gram pre training model, loss selects margin_ranking_loss.

Examples of training data are as follows: three columns (query, title, neg_title) and tab segmentation. For real search scenarios, the training data usually comes from the click log on the business line to construct positive samples and strong negative samples.

The code structure is as follows

For prediction, the prepared data is a text pair for each line, and the final prediction returns the semantic similarity of the text pair.

Based on Paddle The Neural Search function provided by NLP has quickly built a set of semantic retrieval system. Relative to starting from scratch, Paddle NLP provides a set of wheels very well. If you download directly Paddle NLP open source trained model files. For semantic similarity tasks, you can call ready-made scripts in a few minutes! For the semantic retrieval task, the full amount of data needs to be imported into Milvus to build the index. In addition to the training and database building time, the whole process is expected to be completed in 30-50 minutes.

During the interval of training, I also studied and found that the documents on GitHub are also very clear and detailed. For the entry-level students of Xiaobai, I have achieved one click operation, so as not to be trapped by complicated process steps and gradually lose interest; All models are open source and ready to use; For students who want to study in depth, Paddle NLP also has open source data and code, which can be further studied. Great! Ran down and found Paddle NLP is so sweet! Quickly collect Star, keep up with the latest capabilities, and also express some support for the open source community~

In addition, we can also carry out our own additional development based on these functions, such as the moving graph at the beginning to build a more intuitive semantic vector generation and retrieval service. Have Fun!

I also encountered some problems in running the code. Thank you very much Flying oar Students' patient answers. I also learned that another video course for this project has been published. Click the link to watch the course:

Finally, the code of this practice project is attached: