The mathematical formula is as follows:

The basic flow of SAD matching algorithm is as follows:

① Input two left image and right image that have been corrected to achieve row alignment.

② Scan the left image in the left view, select an anchor point and construct a small window similar to convolution kernel.

⑥ Move the small window of right image and repeat the operations ④ - ⑤ (note that a search range will be set here, and if it exceeds this range, it will jump out)

⑦ Find the small window with the smallest SAD value in this range, and then find the pixel block that best matches the left image anchor.

2.1.1 C + + code implementation of sad (sum of absolute differences) based on opencv 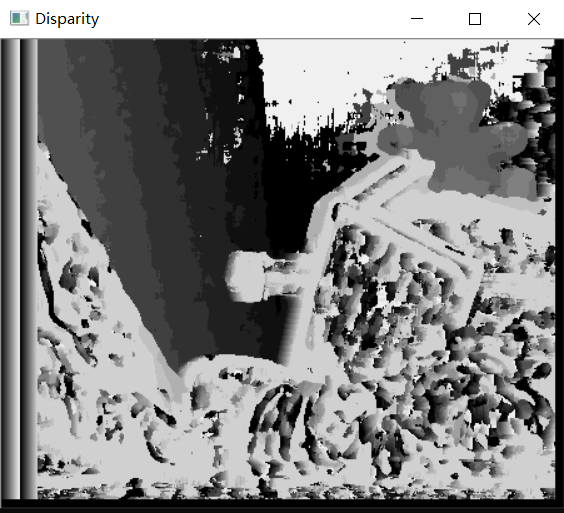 It can be seen that SAD algorithm runs faster, but the effect is poor.

The mathematical formula is as follows:

Its energy function is as follows:

C (P,Dp) -- the cost of the current pixel when its disparity is Dp

The basic flow of SGBM algorithm is as follows:

① Preprocessing: use sobel operator to process the source image, map the image processed by sobel operator into a new image, and obtain the gradient information of the image for subsequent calculation.

③ Dynamic planning: four paths are selected by default, and the parameters P1 and P2 of path planning are set (including the settings of P1, P2, cn (number of image channels) and SAD window size).

See the code and its notes for specific parameters (if the reader needs to optimize, it can be adjusted by himself), which will not be repeated 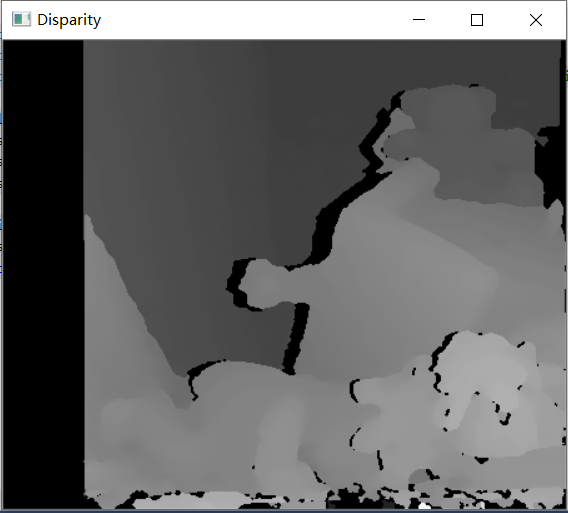 By the way, I also adjusted the size of SADWindowsize to discuss and show readers the impact of setting different SADWindowsize sizes on the Disparity effect. The results are as follows (all in MODE_SGBM mode):

By comparing the above effect pictures with different SADWindowsize settings (other parameters remain unchanged), we can know the following conclusions:

② Improve the performance of the algorithm, optimize the algorithm and promote the real-time effect as much as possible.

④ Emphasize the constraints of scene and task, and establish the standards and methods of binocular stereo vision system suitable for different scenes and tasks.

3.2 development trends of binocular stereo vision at home and abroad

At present, in foreign countries, the adaptive Mechanical System Research Institute of Osaka University in Japan has developed an adaptive binocular visual servo system, which uses the principle of binocular stereo vision, such as taking three relatively stationary signs in each image as a reference, calculates the Jacobian short array of the target image in real time, so as to predict the next movement direction of the target, The adaptive tracking of targets with unknown moving mode is realized. The system only requires static reference marks in both images without camera parameters.

The school of information science, Nara University of science and technology, Japan, proposed an augmented reality system (ar) registration method based on binocular stereo vision, which improves the registration accuracy by dynamically modifying the position of feature points.

The University of Tokyo in Japan integrates real-time binocular stereo vision and the overall attitude information of the robot, and develops a dynamic navigation system of the simulation robot, which establishes a real-time map for the robot according to the real-time situation, so as to realize obstacle detection.

The University of Washington, in cooperation with Microsoft, has developed a wide baseline stereo vision system for the Mars satellite "Explorer", which enables the "Explorer" to accurately locate and navigate the terrain within thousands of meters on Mars.

Harbin Institute of technology has realized the navigation of fully autonomous soccer robot by using heterogeneous binocular activity vision system. A fixed camera and a camera that can rotate horizontally are installed on the top and middle and lower parts of the robot respectively, which can monitor different azimuth viewpoints at the same time, reflecting the advantage over human vision. Even in the actual game, when other sensors fail, the navigation of fully autonomous soccer robot can still be realized only by binocular coordination.