Thread safety problems and cause analysis 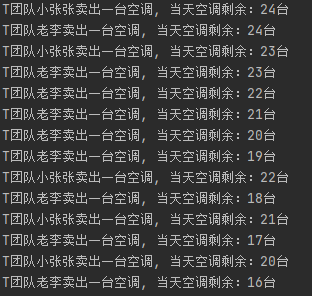 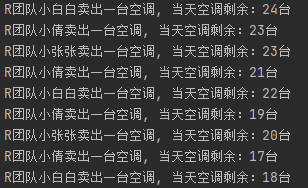 After the end of the day's task, boss Main invited everyone to eat hot pot to celebrate the excellent completion of the task by the two sales teams; And please share your sales experience

After listening to the two teams and seeing the sales list of team members, it's amazing: Why did team T sell 50 air conditioners? Mingming's task on that day is 25 sets for each team, so he plans to raise salary for team T

The members of team r quit and shouted: team T cheated. They copied the sales order of air conditioner. There was so much inventory. How could it be overfulfilled? Boss Main asked: how do you know? Xiao Qian in the R team said that when she made the sales order today, the remaining inventory with Xiao Zhang was 23 units. At that time, she thought she just took it wrong and didn'T pay attention. What is the reason for this problem?

After the last accident that almost caused the workers to work overtime, boss Main was thinking about a solution. At this time, a young man who called himself synchronized came to apply for the job. He immediately pointed out the causes of the previous problems:

The keyword synchronized is often used in java to implement the synchronization mechanism:

Main's boss decided to try synchronized for a day to see if his idea was feasible:

After a one-day trial, there was no repeated inventory problem. The boss of Main decided to make synchronized regular and increase his salary. The little partners of T and R teams admire and envy, and can't help sighing: knowledge is money. If this sentence is true, it seems that we should learn more in the future

Use wait and wake

There are actually two problems implied in the problem of producers and consumers:

Operation that does not release the lock

In the end, they couldn't compete... The customer finally came to pick up the goods in person