In the PyCharm, the function encapsulates the code and calls it in JupyterNoteBook - take the KNN algorithm as an example (K nearest neighbor algorithm).

This blog is devoted to explaining the skills to encapsulate code in PyCharm and invoke it in JupyterNoteBook. Through the learning of this blog, taking KNN algorithm as an example, it is intended to grasp the skills of functional code in plain language. It takes about 5 minutes to read this blog.
Note: the content of this blog is based on the machine learning course explained by teacher liuyubobo, plus my summary and thinking. For more detailed original videos, please search teacher bobo's machine learning by yourself.

Take the core code of KNN Algorithm in the above blog as an example, and create a new one named KNN in PyCharm Py to define a file named KNN_ The function (method) of classify writes the KNN core algorithm code into this method to complete the encapsulation of the code. As shown in the figure below:

In the same level directory of the main file, we create a new one named kNN_function folder, and then enter this folder. Through the upload button, find the KNN we wrote before Py directory and upload it to the jupyter server. The specific operation is shown in the figure below:

Create a new folder as follows:

Change the name of the folder to kNN_function, as shown in the following figure: 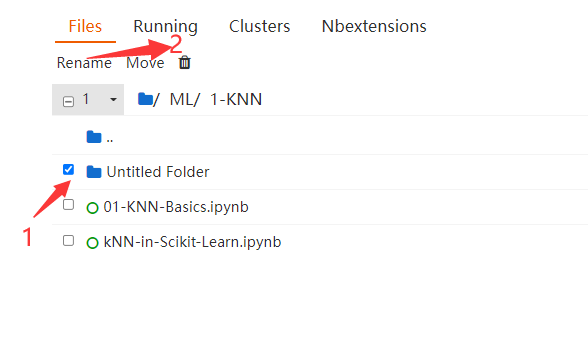 Enter this folder and find knn.com through upload Py file and upload it to the jupyterNoterbook service, as shown in the following figure:

So far, we have put KNN Py is uploaded to the jupyter server.

In the main file, we introduce KNN Py, and then its KNN can be called_ The classify method achieves the same effect as the previous blog. The specific whole code is as follows: