Use Python to visually analyze the data of tens of thousands of games of Jedi survival, and teach you to make the strongest chicken eating strategy~

Good luck, eat chicken tonight ~ today, I played with my friends to eat chicken and experienced various death methods. I was also ridiculed that there are 100 death methods for girls to eat chicken, such as being swung to death by fist, parachuting to the edge of the roof, playing chicken as a flying car, being killed by car skill show, and being burned by teammates with a burning bottle. This kind of game is a game for me to understand that there is still this way of death.

But I still have to pretend that I'm addicted to learning, so today I'll use the real data of chicken eating competition to see how to improve your probability of eating chicken.

So let's use Python and R for data analysis to answer the following soul questions?

1, Where is it dangerous to jump?

For a conscientious player like me who has always liked to live in poverty, after countless painful experiences of landing into a river, I will never choose to jump into a city with dense buildings such as P city. It's important to be poor, but it's important to keep my life. So we decided to count which places are easier to land into rivers? We screened out the locations of players who died in the first 100 seconds for visual analysis. The power station, piccado, villa area and Yibo city of passion desert map are the most dangerous, and the railway station and thermal power plant are relatively safe. P City, military base, school, hospital, nuclear power plant and air raid shelter in Jedi island are absolutely dangerous areas. The material rich port G is actually relatively safe. 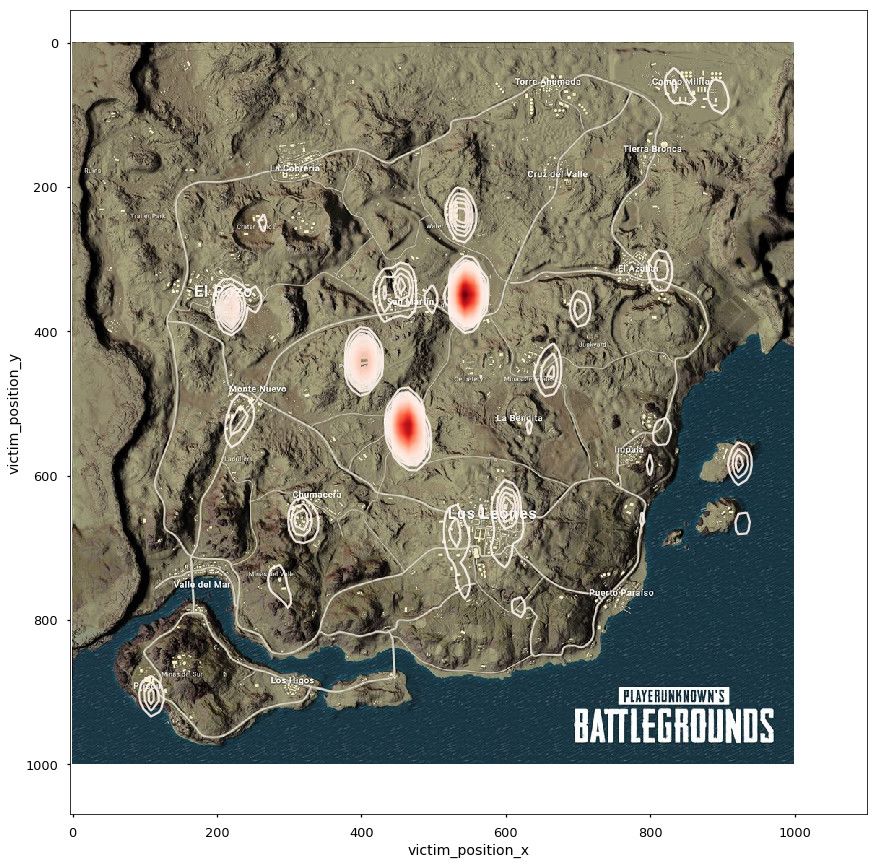 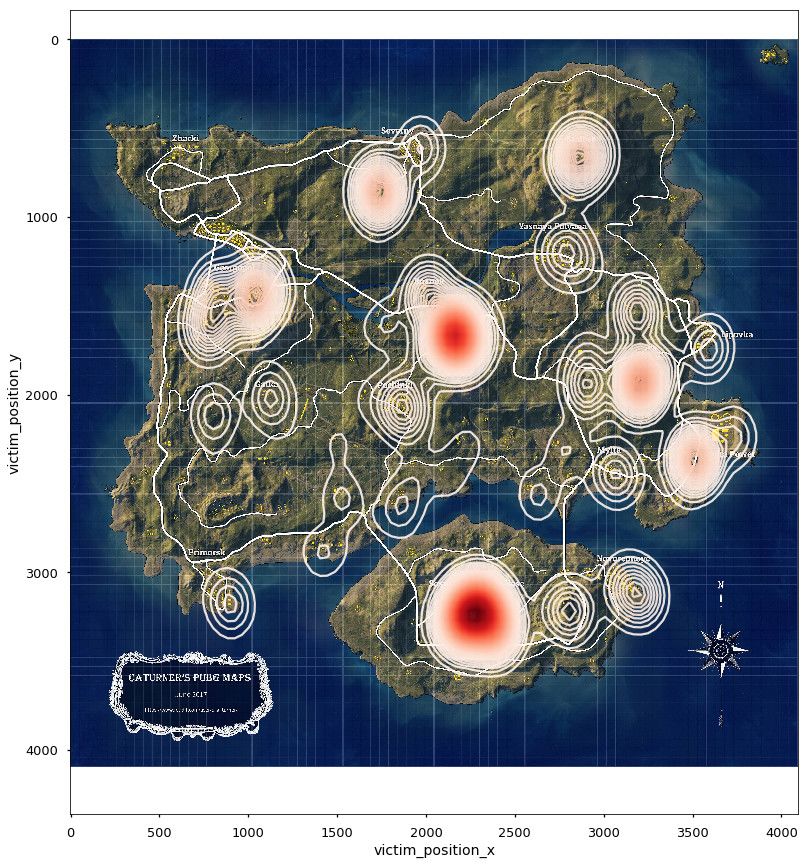 Do I stay in the room or go out to fight with the enemy? Because the scale of the competition is different, the competition data with more than 90 participants are selected, and then the team is selected_ Placement is the data of the team that successfully ate chicken in the end: 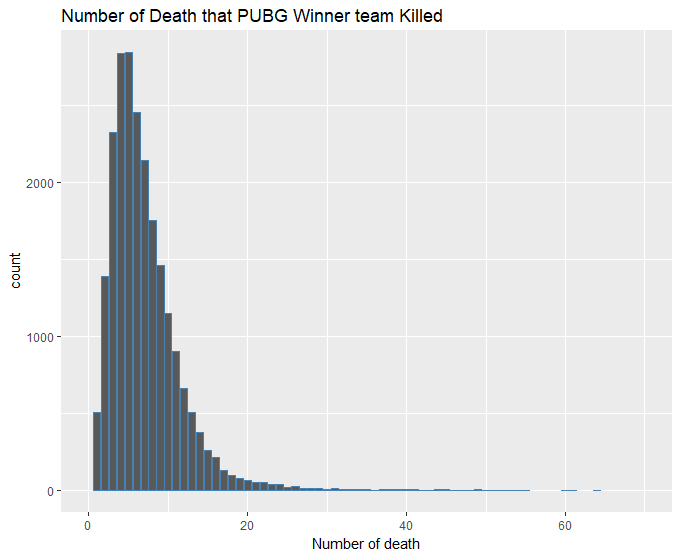 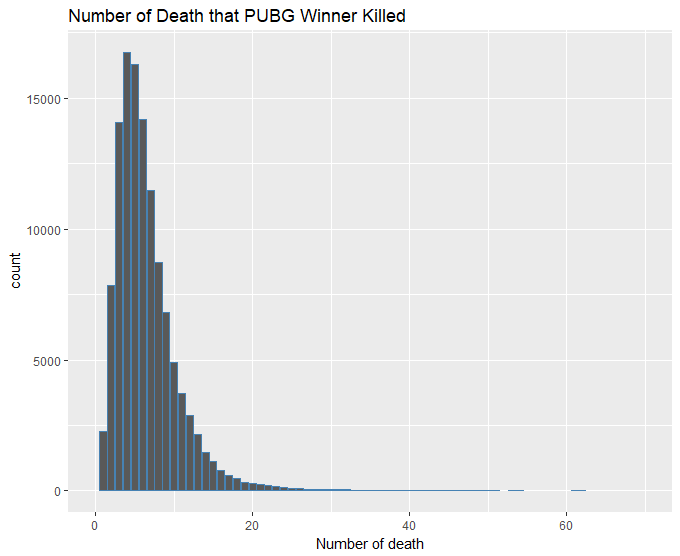 When you are lucky enough to pick a good weapon, do you hesitate to choose which one? From the picture, M416 and SCAR are good weapons and relatively easy to find. It is generally recognized that Kar98k is a good gun that can kill with one shot. The reason why it ranks lower is that this gun is relatively rare in the competition, and it also needs strength to hit the enemy at once, Players like me who pick up 98k and install 8x mirror but don't cover it for 1 minute don't deserve it. 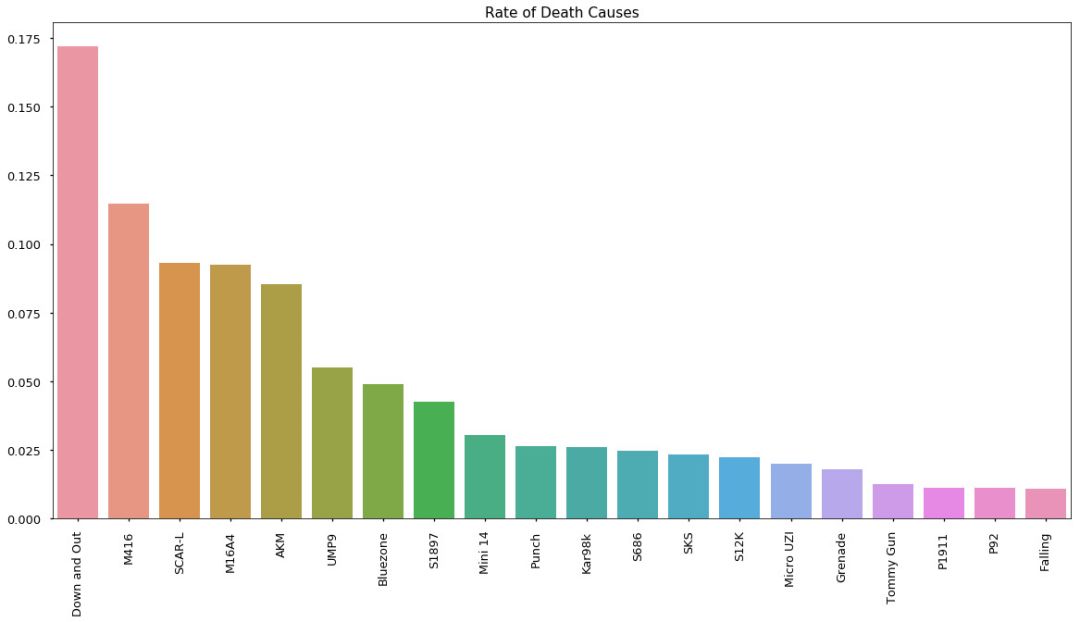 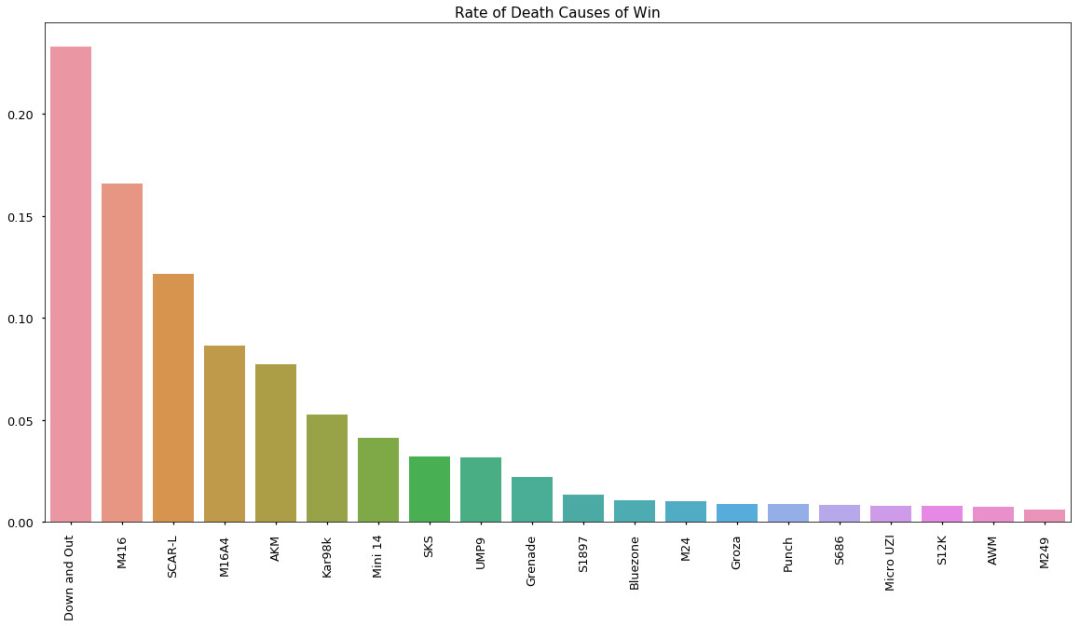 4, Does my teammate's assists help me eat chicken?

Sometimes I was knocked down without paying attention. Fortunately, I climbed fast and asked my teammates to save me. Here we choose the team that successfully eats chicken. The probability of the team of the member who finally receives one help eating chicken is 29%, so it's still very important for teammates to assist (don't scold my pig teammate, I can also choose not to save you.) You are also a talented person who has been saved by your teammates nine times. 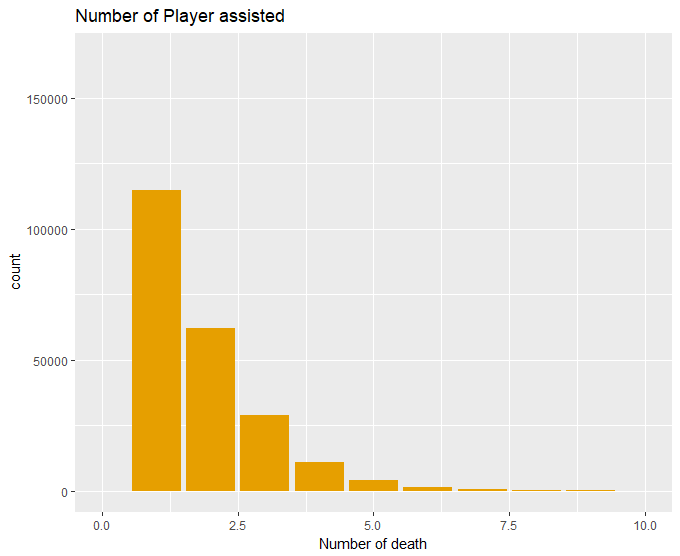 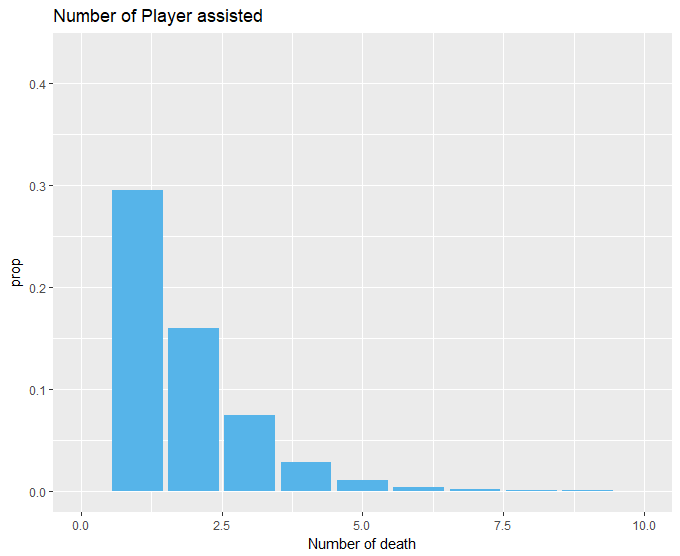 5, The closer the enemy is to me, the more dangerous it is?

For the killer in the data_ Position and victim_ The position variable is used to calculate the Euclidean distance. Check the linear distance between the two and the distribution of being knocked down, showing an obvious right deviation distribution. It seems that it is still necessary to observe the nearby enemy at any time, so as not to know where the enemy is when it is eliminated.

VI. The more team members, the longer I live?

For parties in data_ Through the survival analysis of the size variable, it can be seen that under the same survival rate, the survival time of the four person team is higher than that of the two person team, and then the single person mode. Therefore, it is not unreasonable to say that many people have great strength. 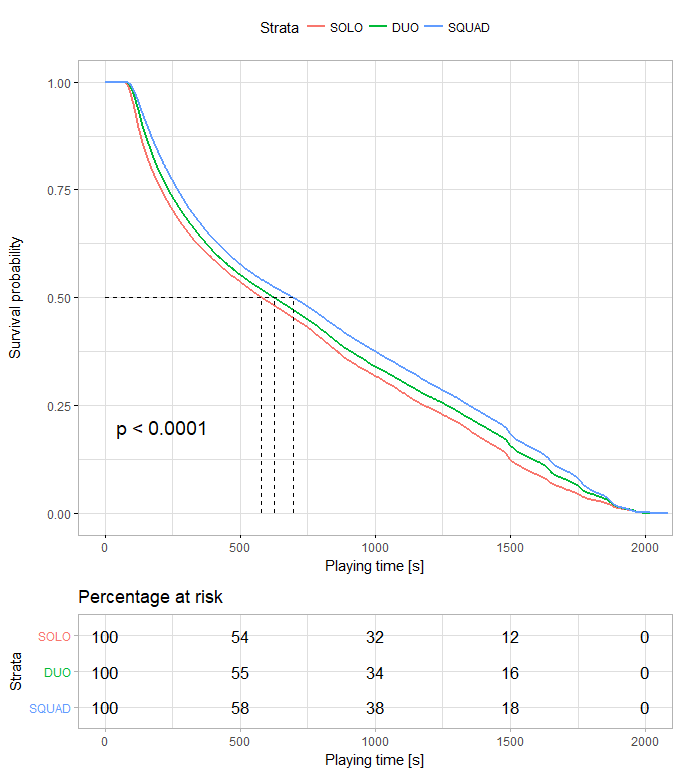 In the analysis of the cause of death, it was found that many players died in Bluezone. We naively thought that picking up the bandage could escape the poison. For the player in the data_ dist_ Through the survival analysis of ride variable, it can be seen that under the same survival rate, the survival time of players with driving experience is higher than that of players who only walk. You can't run with your legs alone. 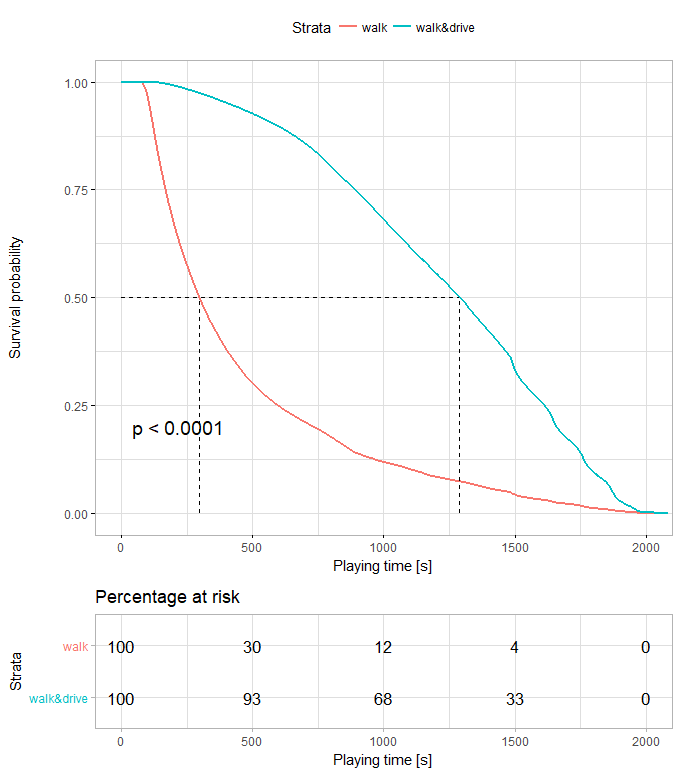 8, The more people on the island, the longer I live?

For game_ The survival analysis of size variable shows that small-scale games are easier to survive. 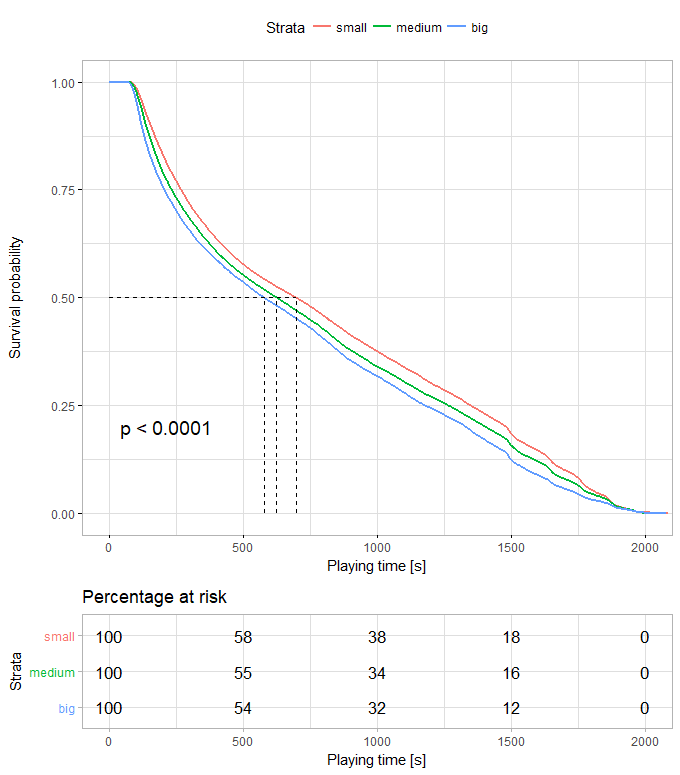 IX. where is the last poison ring likely to appear?

How to predict where the last poison circle will appear in the face of me who can survive to the end. From table agg_ match_ Find the first ranked team based on stats data, and then follow match_id grouping, find the player in the grouped data_ survive_ The maximum value of time, and then match the table kill accordingly_ match_ stats_ According to the data in final, the location of the second death is taken from these data. It is found that the poison circle in passion desert is obviously more concentrated, which probably appears in piccado, St. Martin and villa areas. Jedi islands are more random, but you can still see that military bases and mountains are more likely to be the last poison circle. 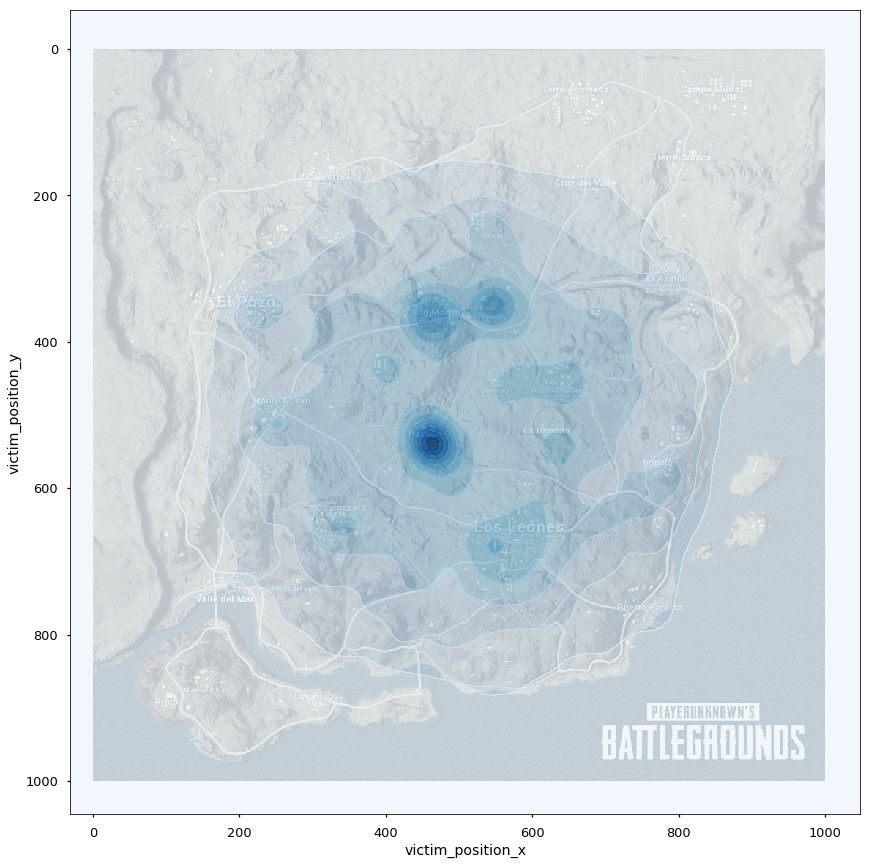 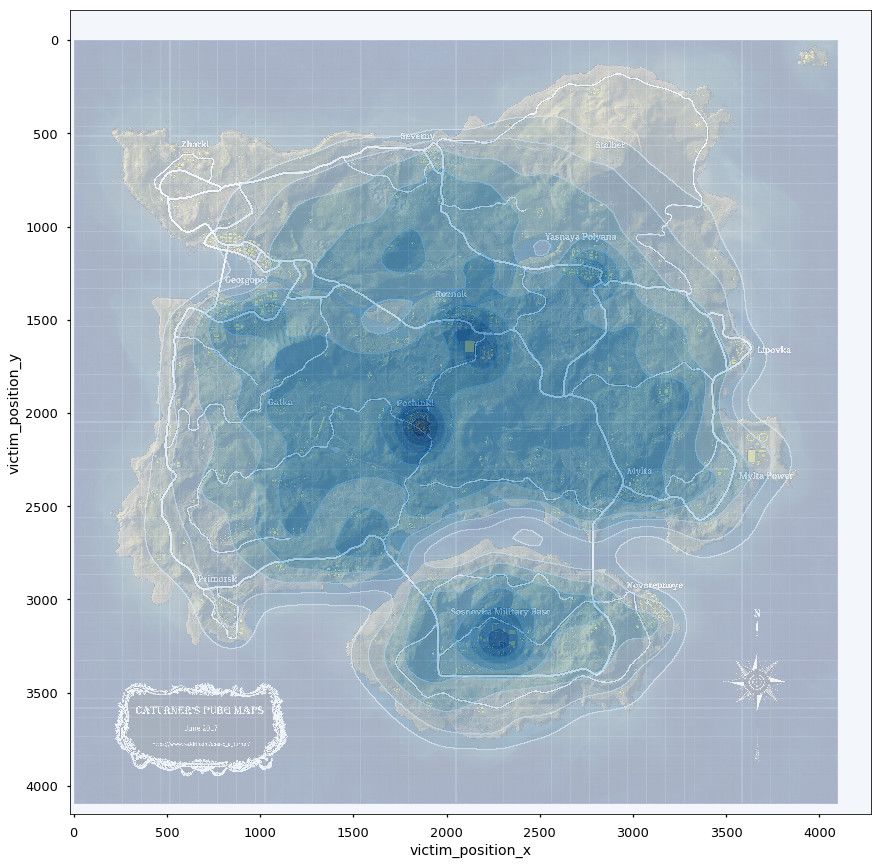 This sharing is over now ~ I hope you like it! Remember to make up a series for Xiao before you leave~

The support of my family is my biggest motivation to update! 💪🎮 Finally, I wish you all good luck ~ eat chicken tonight