[war, interviewer] I think the salary of spring recruitment is higher than that of the interviewer. Just read this concurrent HashMap

I'm kangarooking, not my brother's brother. An Internet worm "gua" cow, sincerely share experience and technical dry goods. I hope my article is helpful to you. Pay attention to me and make a little progress every day ❗ ❗ ❗

This article is applicable to the following groups: 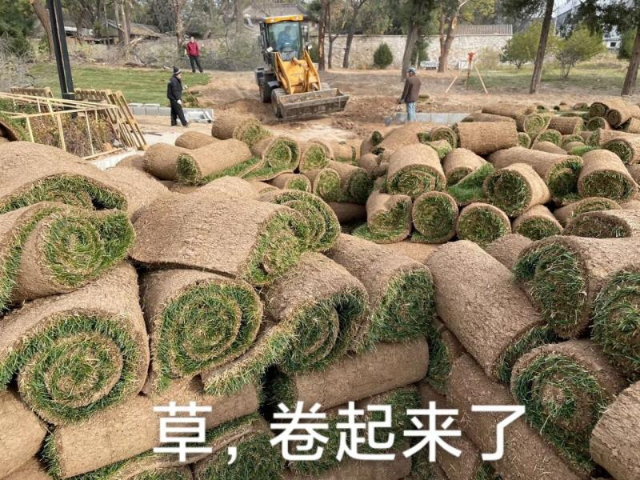 Tip: before reading this article, you'd better have a certain understanding of the principle of hashMap

The following contents are some experiences and conclusions drawn from the emperor's repeated reading and debug source code. Iron people can eat at ease, and children and old people are not deceived ~.

Here are some common questions about ConcurrentHashMap in interviews.

Cut the crap and go straight to work.

Interviewer: what's wrong with HashMap? Why should there be concurrent HashMap?

Interviewer: do you know how concurrent HashMap ensures thread safety?

I: many variables of ConcurrentHashMap are decorated with volatile to ensure visibility under multithreading and prohibit instruction reordering. However, volatile does not guarantee atomicity, so cas optimistic lock and synchronized keyword are introduced to ensure atomicity.

Interviewer: how does it go?

Me: first calculate the hash value of the key, and then there is a for(;) As the spin operation of cas, the loop inside for initializes the table array by cas first, then calculates a subscript position through the hash value of key and the capacity of the array, adds a synchronized lock to the chain header node at the subscript, and then performs subsequent operations.

Interviewer: why do these two places use different locks? Why are they designed like this?

Me: cas is a lightweight lock, which is a simple process of comparison and replacement, and the process instructions are completed at the cpu level, so it is very efficient. Because the table is initialized only once, even in the case of fierce multi-threaded competition, as long as one thread is initialized successfully, the competition will end directly, and there will be no case that some threads can't grab the lock and waste cpu all the time. Why add synchronized in the header node? Because if the whole table is locked, other threads have to wait for all the put operations of one thread to complete before they can execute the put operation. The efficiency of program operation will be greatly reduced. If it is added to each node, when traversing the linked list, each node must be locked and unlocked, and the competition at the node is not fierce, which wastes performance. Therefore, adding it to the head node of the subscript will not affect the operation of other threads on other subscripts, and can ensure the thread safety of the whole linked list under the same subscript. It can be said that the granularity of locking is just good.

CAS calls the CAS method of Unsafe class of java, which is a native method (implemented in c + +), and the underlying implementation completes CAS operation at CPU level through cmpxchgl this instruction. A lock instruction needs to be added under multi-core; lock cmpxchg to ensure atomicity; The lock instruction locks the cache line or bus of the CPU

synchronized has been optimized for lock upgrade in java8, and it is a jvm level lock. Compared with the lock implemented in Java, it is closer to the operating system, so its performance is not poor.

Interviewer: how is the capacity of concurrent HashMap expanded?

I: in the putVal method, the key value of put has been successfully put into the map, and then the operation of + 1 on size is started. In order to ensure thread safety, concurrentHashMap uses cas to accumulate baseCount. In order to prevent threads from losing cas and wasting cpu in the case of fierce multi-threaded competition, another method is introduced
The counter cell [] object array allows the thread that fails the competition to obtain an object in the object array, and then increase the value of a variable value in the object (the value is also increased by cas). Finally, the size value of the whole map is the sum of the value values of each counter cell object in the basecount + counter cell [] array. The advantage of this design is to use the idea of segmented locking to allocate the competition to each CounterCell object, so as to improve the efficiency of program operation.

Interviewer: what is the role of sizeCtl, the variable of concurrentHashMap?

After the interview, the interviewer found the leader and said, "brother Ming, this guy is good today. Those people who came before were won by me with two moves of ConcurrentHashMap. Today, it's hard to distinguish between me and him. I think it's him?". Leader: "Xiao Gou, I forgot to tell you. President Li brought someone here this morning and occupied the pit. Now there is no need to recruit people." Interviewer: "OK." The interviewer's inner activity: "ha ha, ha ha, great, it's been two months. Today is finally over. Go back to Wuhei to celebrate tonight".

After a week, I said, "wc, I shouldn't. I'm very good at this one. I basically answered all the questions. What's the situation ❓ ❓ ❓” gg

Hahaha, don't think what I said above is fictional. I'm sure this similar plot must often happen in reality. Art comes from life. So I want to say that the interview still depends on fate. Don't be discouraged because you have met many families, or you feel good about the interview and can't get an offer. This family can't go out and turn right to the next one. Keep an ordinary mind and stick to it. Remember not to go to any one because of anxiety. You must believe that there is a better choice waiting for you.

We mainly focus on the source code of put method. Before formally introducing the put method, let's first some methods called in Kangkang put method.

On the basis that the original HashMap shifts the hashCode value to the right by 16 bits, another hash is & created_ Bits (which is different from HashMap), 7fff converted to binary:

When put, determine whether the array is null or the length is 0, and then perform the initialization operation

Summary: the initialization operation of ConcurrentHashMap is to initialize the array. If the initial size is not set, the default size is 16. Initialization uses sizeCtl as an identifier to determine whether other threads are initializing. cas optimistic lock and double detection mechanism are used to ensure thread safety and efficiency.

putVal method will be called inside the put method

Summary: putVal method uses a for (Node < K, V > [] tab = table;) Infinite loop as the spin operation of cas. After obtaining the subscript through the hash value &n, first judge whether the subscript is null. If it is null, directly put the subscript and break out the loop. If there is a header Node, get the hash value of the header Node. If its hash value = = MOVED, it indicates that the header Node is a transfer Node, so go to help expand the capacity first. Otherwise, lock the head Node directly, and finally put the new Node object generated by key value into the linked list or red black tree. Finally, add up the size by 1.

Come on, the difference between excellent and ordinary is that they can do what others can't, such as continuing to read code that others can't see. ☔ ⛅ 🌈

Add 1 to the value of an object in baseCount or CounterCell [].

Let's take a look at the method of size statistics in ConcurrentHashMap: you can see the total value of all objects in size=baseCount + CounterCell []. 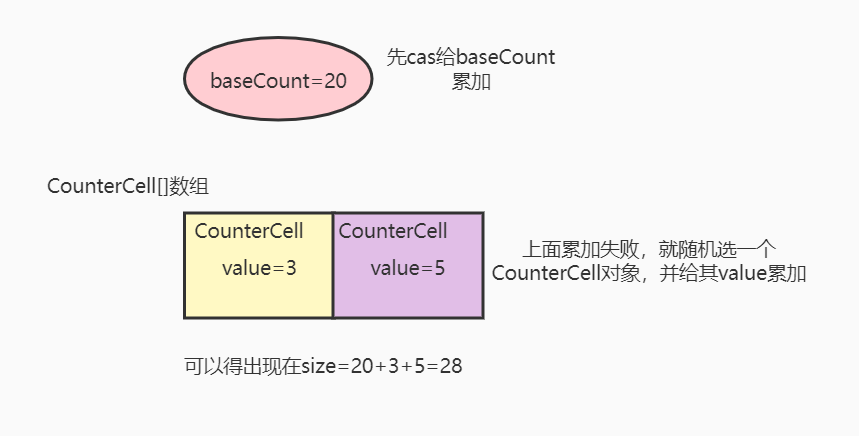 Summary: the first step is to accumulate the size. First, perform the accumulation of cas and baseCount. If the accumulation is successful, it proves that the competition is not fierce. Go directly to the following to judge the expansion. If the accumulation fails and the competition is fierce, add the value 1 to the counter cell object of counter cell [], obtain a random number through as [threadlocalrandom. Getprobe() & M], and ensure that the number will not collide under multithreading. Try to let different threads obtain different subscripts of CounterCell [] to reduce contention and improve efficiency. In the logic of checking expansion, you should pay attention to sizeCtl = RS < < resize_ STAMP_ Shift) + 2 means that there is only one thread for capacity expansion at present. For each new thread that helps to expand the capacity, sizeCtl will be + 1, and reducing one sizeCtl will be - 1. 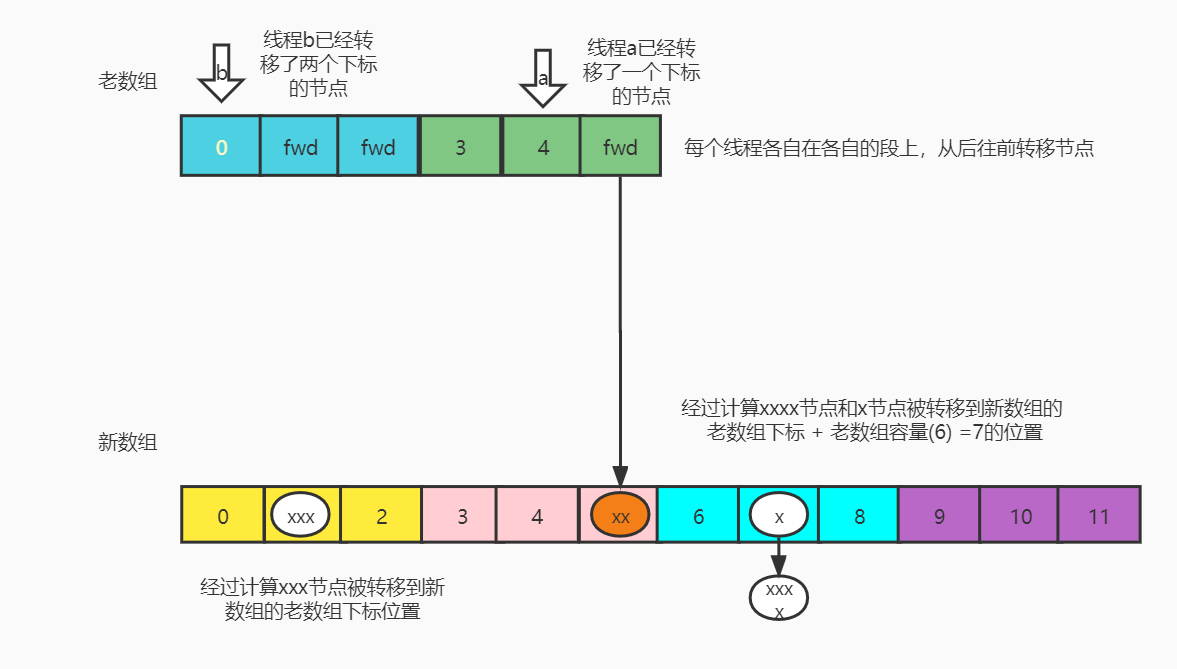 The calculation methods of initial capacity of ConcurrentHashMap and HashMap are different:

Note: array initialization is not performed when setting the initial capacity.

The algorithm of initial capacity is different:

From the figure below, we can see that (hash & oldcap) = = 0? I: I + oldcap and (newCap-1) & hash can calculate the subscript position of the node in the new array, but why use the former instead of the latter in capacity expansion? This involves the knowledge points of and operation, 1 & 1 = 1, 0 & 1 = 0, 0 & 0 = 0. It can be seen that if the currently obtained bit value is 1, you still need to judge whether the & is 0 or 1. If the currently obtained bit value is 0, you can directly get the result of 0 without knowing another value participating in the & operation. Therefore, it can be concluded that the performance of the former must be higher (because it is more than 0 a!). 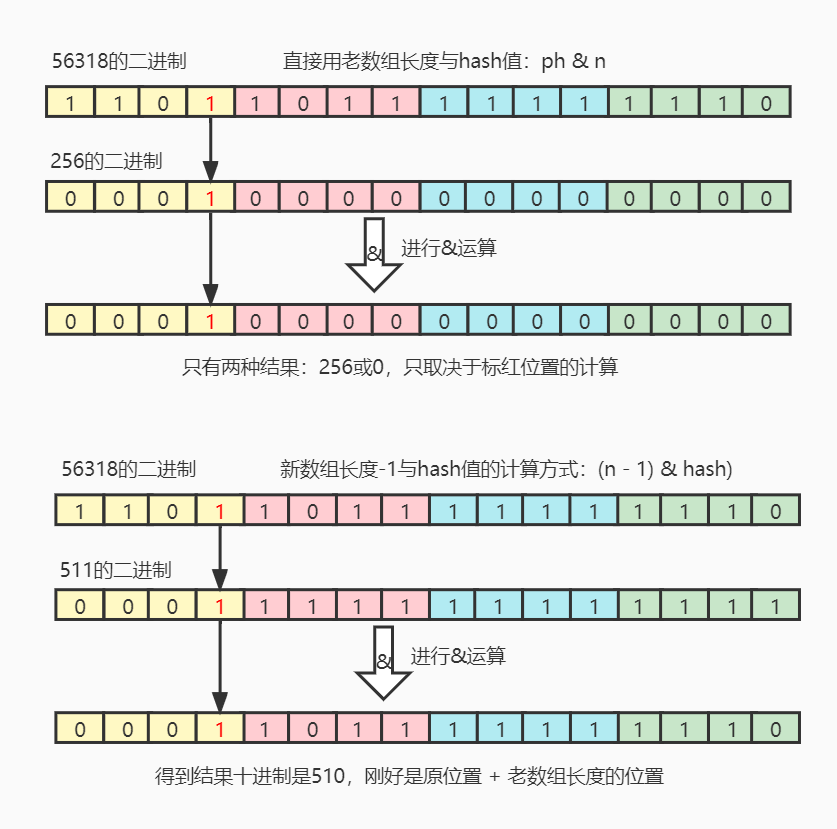 See here to deal with the general interview is basically no problem. Next, it belongs to the content of volume king. I'm kidding. To tell you the truth, you can't understand it but you're not familiar with it. You forget it faster (don't think you're Zhang Wuji). You'd better debug it yourself. The following content shares my experience in debugging, so that brothers can save some time.

First of all, concurrent HashMap is used for concurrent programming. Do you want to do some multithreading before debug? Hey, hey, Ben Di is ready for you. 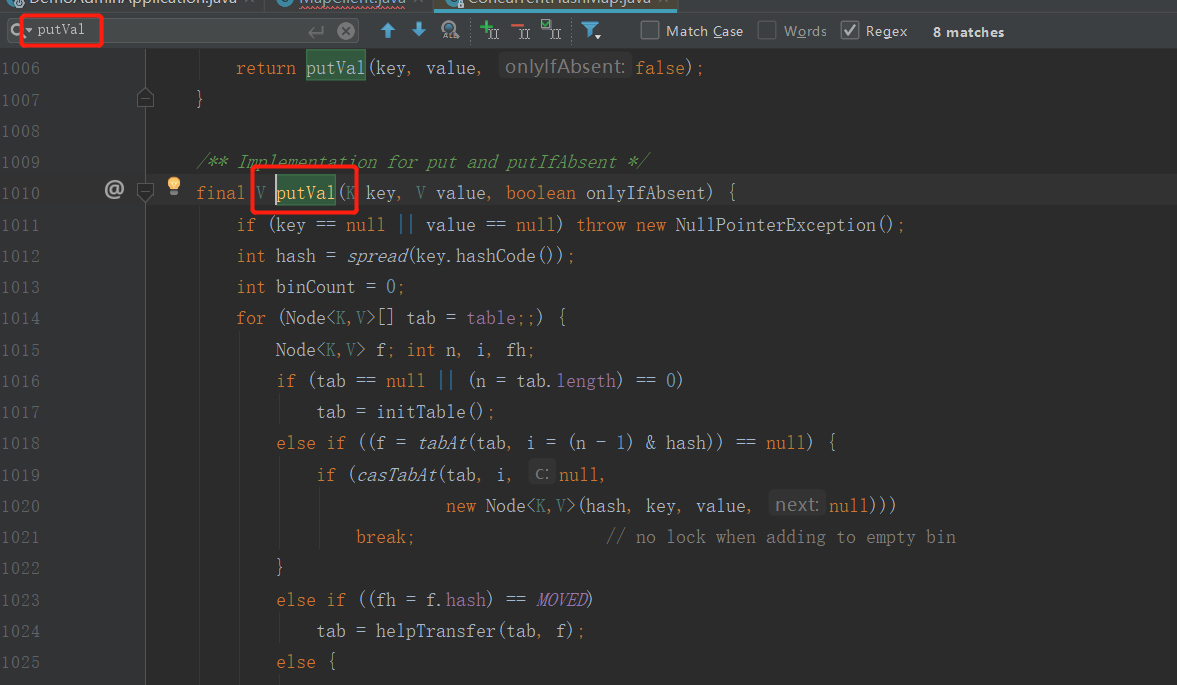 Set breakpoint judgment. If you want to see all threads except main thread:
!Thread.currentThread().getName().contains("main")

If you want to see a specified thread:
Thread.currentThread().getName().contains("pool-1-thread-2")

Then break the point at the code after the transfer to see the comparison effect before and after the transfer.
Here, the breakpoint is also set with the same condition thread currentThread(). getName(). contains("pool-1-thread-2") && nextn == 256 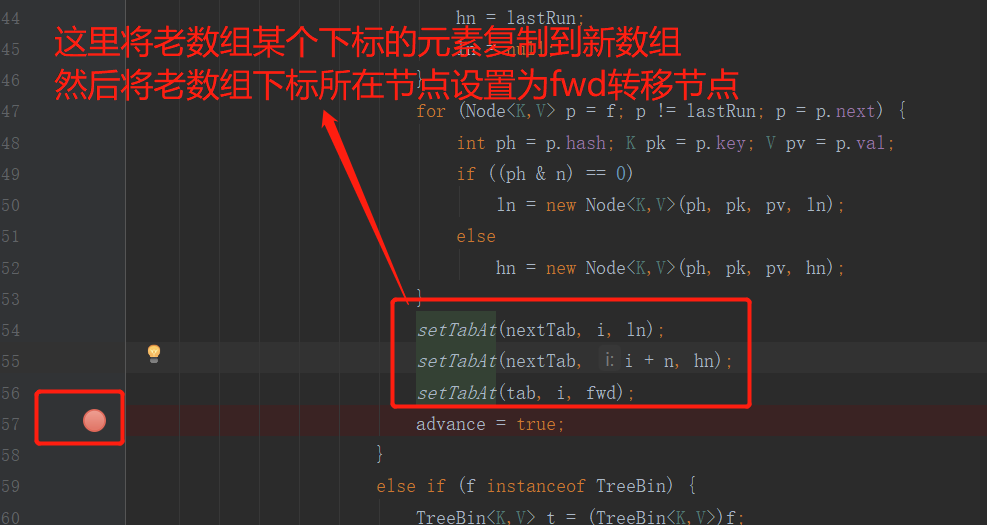 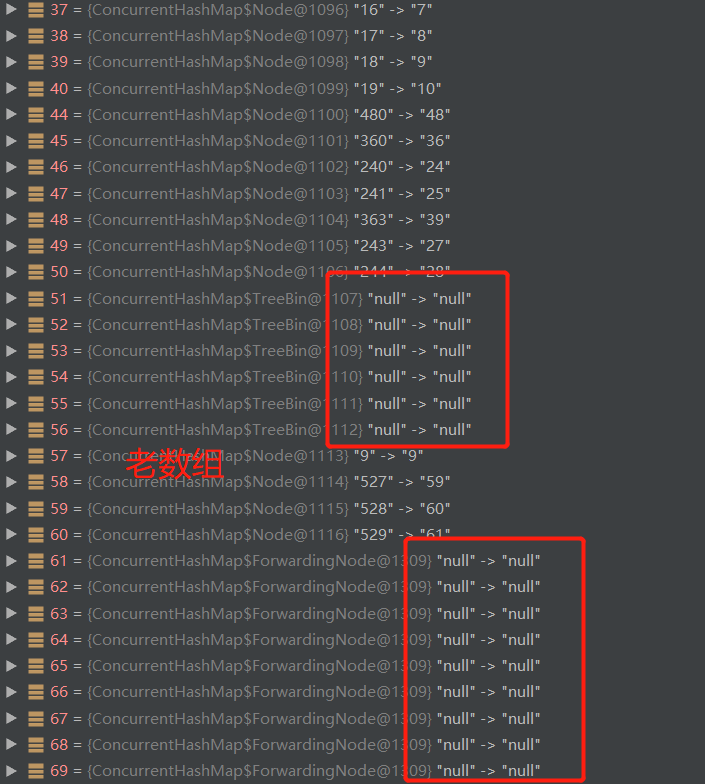 Note: you may have to restart the program several times before it can stop at the breakpoint. In the process of debug ging (F9), other threads will also run at the same time, so you should consider the operation of other threads when looking at the results.

Reading articles only plays an auxiliary role in program learning. Many times, you still need to read the source code and operate it yourself in order to master this knowledge more firmly. There is no secret under the source code. After reading the source code more, you will find that there are many requirements or designs in the actual development, which can learn from the design ideas or some codes in the source code. In short, your skill of assignment and pasting is improved again.

For example, obtain random numbers that will not collide with numbers under multithreading:
ThreadLocalRandom.getProbe()

When you need to use cas in your project, you can also refer to the use of its source code, etc... 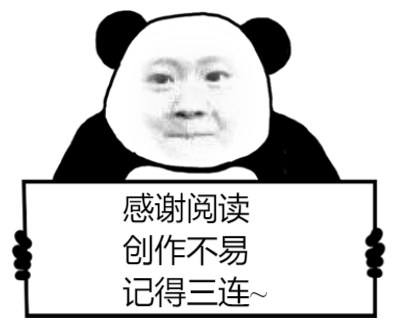 WeChat official account, "kangaroo's Inn", is available for comment. If you think my sharing is helpful to you, or think I have something, support my fledgling writer, Sanlian, Sanlian ~ ~. give the thumbs-up 👍 follow ❤️ share 👥