The main reason is that the last time server12 was pulled full by one of its own train direct threads (yes... server8 was also pulled full by emm. I didn't find out at first that it was me)

Later, Liu Suo told me that let me see if there are too many processes in the dataset. In this way, the utilization rate of GPU is not high. It is suggested that the processing should be completed first and then directly trained by load; Because the cpu on the server is not very good, playing like that will slow down the training speed at the beginning. There are two options:

A series of operations such as thread parallelism and multi machine parallelism:

Some operations are progress bars that can be ignored. Note that the concurrent ray original tqdm progress bar will fail!

See the official for details: (also see the progress bar under copy in the above gitlab)

About 2.5 times the processing speed

After that, if it is still very slow, it will not be the pot of CPU. It is recommended to check the reading speed of io as follows:

Remember the location of a server IO bottleneck · TesterHome

It is mainly to read the dataset directly through the files saved by pkl after processing the data. For example, Carla is processed above_ Data and then write a dataset that directly loads pkl

It can be seen that after processing in advance, the CPU utilization will not be full to 100% or even equal to none (because other people use the server at the same time)

I didn't compare the efficiency between the two, so we came to this conclusion according to the official documents

Moreover, because the cross thread operation of DataParallel makes GIL competition between threads, replication model synchronization between each iteration, and decentralized input and integrated output, these will lead to additional overhead. Even on a single machine, DataParallel is usually slower than distributed DataParallel.

This is one of them. Second, if your model is too large to fit a small GPU, DataParallel will fail, because you must use model parallelism to split it into multiple GPUs. Distributed DataParallel works in parallel with the model, but DataParallel is not implemented at present

After learning the theoretical knowledge, enter the code practice part

Just as in the github (in fact, the hhhh hh is well written. The following are some repetitions and additions, because emmm is hard to say when encountering some unexpected situations)

The reason why it's simple is... It only needs one line, just put your own model into the network

For ease of illustration, we assume that the model input is (32, input_dim), where 32 represents batch_size, the model output is (32, output_dim), and four GPUs are used for training. nn. The function of dataparallel is to divide the 32 samples into 4 parts, send them to 4 GPUs for forward respectively, and then generate 4 outputs with the size of (8, output_dim), and then collect the 4 outputs on cuda:0 and combine them into (32, output_dim)
As can be seen, NN Dataparallel does not change the input and output of the model, so other parts of the code do not need to be changed, which is very convenient. However, the disadvantage is that the subsequent loss calculation will only be carried out on cuda:0, which can not be parallel, so it will lead to the problem of load imbalance; If the loss is calculated in the model, the above problem of load imbalance can be alleviated

Implementation is more troublesome because it is multi process

So you run a sentence, but it's similar to a script running four python, so all printing and saving will run four. The way is to judge that this is args local_ When rank is 0, perform these save and print operations

CUDA_VISIBLE_DEVICES is the GPU id that the script can see when running, nproc_per_node is the number of GPUs, nnodes is the number of hosts, and a single machine is 1, train Py is your normal training code. Please pay attention to the following modifications:

Please check the remaining problems in advance. See the relevant problems in the follow-up section

For the comparison of two 2080Ti and one 2080Ti with the same amount of data, the final effect speed comparison of DistributedDataParallel is used: 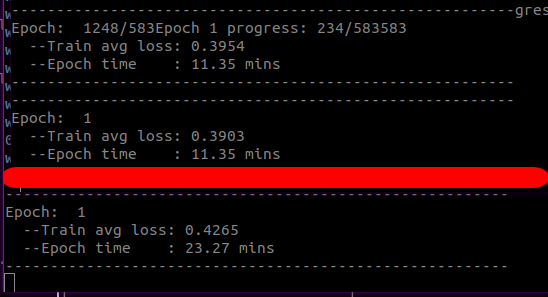 Comparison of DP and DDP utilization

This is mainly about the batch_size is allocated, that is, the number of GPU s will be divided. If such a situation is involved in your processing, the size of relevant data will not match

For example, in the dataloader, the data in batch is maximized as a length; Then continue to process the data as the length in the forward of the model, then; Four scattered batches will have four different size s and lengths, and certain problems will occur. The facts ahead are as follows:

Recommended measures: all data size determination shall be completed in the loader section

The following is the initial investigation

It is also mentioned here that small loader s are too small. It is best to process them into large ones and then read them: https://github.com/Lyken17/Efficient-PyTorch#data-loader

It has been written, but it comes out directly in the loader, that is, batch_size is settled from here → wrong approach

See if you can use Ctrip lmdb style and loader style. It's a little too violent