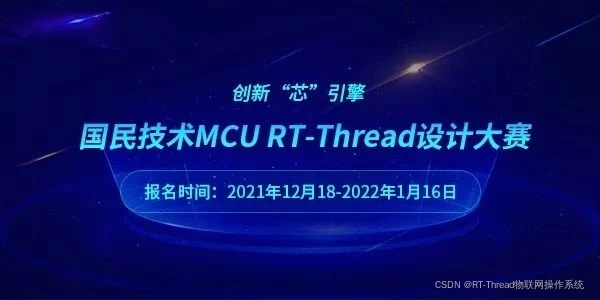 This article was originally released by RT thread user @ chengjili and is used to participate in the n32g457 RT thread design competition jointly launched by RT thread and national technology. The original text: https://club.rt-thread.org/as...

This design is used to participate in the innovation "core" engine - national technology n32g457 RT thread design competition. The original intention is that because military products are required to be made domestically, we have been testing the performance, development convenience and most important stability of 32 chips from different domestic manufacturers recently. I have been developing with RTT before. When browsing the official website and finding this competition, I'll take part in it by the way. As for what to do, I can't do anything in my work. All military products are confidential. Can only think of some simple. Just think of the usual test, especially the out test, which is often distressed because of the power problem. So I want to be a simple adjustable voltage source. In this way, I only need to bring a charging treasure to output a voltage of 1~35V, and the peak current can basically reach more than 5A. You can drive most devices. Of course, devices with high power consumption need a large power bank to work for a long time, but at least the problem of power supply voltage mismatch is solved and can be used in emergency.
Since this competition requires the development of the core board given by the official, it is planned to simply realize the main functions first. Later, we will make a specific board to realize the overall function. The test hardware is shown in the figure below. The minimum system board of N32 is added with a board for other tests. This board only uses part of the circuit of LTC3780.

The specific circuit is shown as follows: 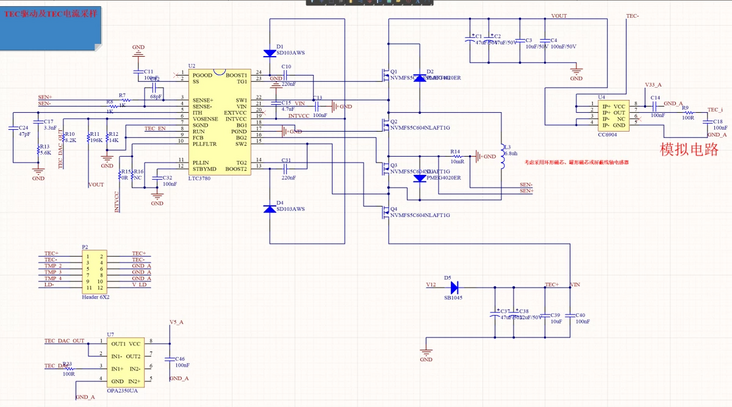 Among them, TEC ground is the final power output interface, TEC_DAC is the output voltage adjustment port, which is connected to PA4 pin of N32 board. TEC_i is the output current detection port, connected to PC1 pin of N32 board. A voltage dividing resistor of 110K and 10K is flying from the power output to the ground, and the voltage dividing short point is connected to the PC0 pin of N32 board to measure the output voltage value (the measured voltage is not calibrated temporarily).
There is no display interface in the beta version (I don't want to connect the fly wire to the screen) 🤣). Instead, the shell interface. The shell command is also used to set the voltage and current values. Later, when making the circuit, it is changed to the interaction between the display screen and the keys and the encoder knob. The test interface is as follows:

The shell command is implemented to modify the voltage value and current value. ADC acquisition of output voltage and current feedback. Display the current output power in real time. PID control output voltage value. When the current exceeds the current setting value, the current limiting protection is triggered to reduce the voltage. For the function of outputting voltage according to specific waveform, only sinusoidal signal is temporarily. This function needs to be extended to other signals in the future.
In terms of program, I think some drivers of RTT are not very efficient and are only suitable for simple use in specific occasions, or provide a demo. To achieve specific functions, it is recommended to rewrite the underlying driver. For example, the shell underlying serial driver framework and ADC driver framework are used this time. In my daily use, most of them use other system boards to configure the operating parameters of the current board through shell commands. In this way, the amount of data transmitted is much higher than that of manually entering commands. If the bottom processing efficiency is low, there will be the problem of high CPU occupancy when losing data, instructions and serial port configuration parameters. Therefore, to adapt to this situation, I have to rewrite the bottom driver and add the transceiver FIFO. Reading and writing are only for the FIFO interface of the software, without waiting for the real sending and receiving of the hardware, which improves the efficiency of code execution. However, the test functions this time are all manual input of shell commands, so I didn't change this part of the driver, so I used the original one, which is enough for this test demand. But to participate in the competition, you always have to make some contribution to the code, so this time the main change is the underlying driver of ADC, adding some immature understanding of ADC use in your work, hoping to help friends in need. The following is a detailed description:
The following are the official driver, enable ADC channel and the code for reading ADC data:

First of all, the initialization ADC in enable has been written to death, the multi-channel acquisition has been turned off, and the continuous conversion has been turned off. Only one channel can be added to the rule group. Therefore, only one channel can be enabled at a time, and the next channel can be enabled after the conversion. Each reading should enable the software to trigger the conversion, and then wait for the conversion to complete, and then read the conversion result and return. This is not an efficient method at present. while waiting, the CPU can't do anything, nor can it schedule to execute the tasks of other threads. It is only suitable for accidentally reading ADC data. Most of the ADC data reading is basically to read a large amount of data, do some smoothing filtering or median filtering, and finally get some stable data. However, it is difficult for this framework to realize this function. Even if one thread is forced to read ADC data frequently to realize this function, it is estimated that the powerful 32 chip can basically do nothing else. The dominant frequency of 144M is not high, but it is not low. There are fpus that can execute some floating-point instructions in parallel. With good use, many things can be completed. It seems that the official ADC driver framework is basically limited to simple demo. So ADC added its own driver as follows:

The general idea of the code is to call RT_ device_ When the open function opens the device, initialize the ADC through the Init function here and start the DMA. The amount of ADC data acquisition per channel used here is 100. After half of the data transmission is completed by using the DMA interrupt function, half of the data transmission is completed. In this way, data processing and DMA transmission can be performed in parallel. Send the corresponding event in DMA interrupt. Start a high priority thread, block the event waiting for DMA transmission completion, and process the corresponding data respectively. There is no median filter here, only a simple average filter. After testing, the frequency of collecting ADC data is about 142 frames / S. That is, a set of filtered ADC data is generated in about 7ms. You can modify the sampling time and average points according to your needs. I plan to use 10ms for the PID thread for output voltage regulation, so it is controlled within 10ms. Ensure that there are new data for each PID operation. 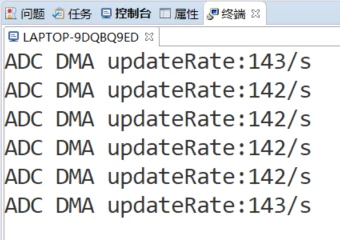 The ADC rule group I use adds four channels. The first channel is CH18, viz. Vreint. The second channel is CH16. The CPU temperature is measured. Finally, the temperature of the whole circuit board is measured. According to the circuit board temperature, the cooling fan is driven to control the cooling. Finally, whether to use CPU temperature control or lay a thermistor next to the heating device will be determined later. Here, because the minimum system board and the power board are separated, the CPU temperature can not measure the temperature of the heating device. So it's just a simple acquisition and display. The third channel is PC0 pin, which is used to collect the feedback of voltage output. The fourth channel is PC1 pin, which is used to collect current feedback. There is no sampling resistance on the test board, but a Hall sensor with a range of ± 10A is used. So the accuracy is a little poor. In the end, there is no need to use this chip. It is planned to use the sampling resistor for the final board. N32 has its own operational amplifier, which can directly amplify the input to ADC for acquisition.
The specific ADC data processing is to compensate the 4-channel data collected in each cycle according to the internal reference voltage according to the theory that the power ripple has little difference in a short time. In this way, the voltage calculated according to ADC data is accurate. The measured data here are as follows: 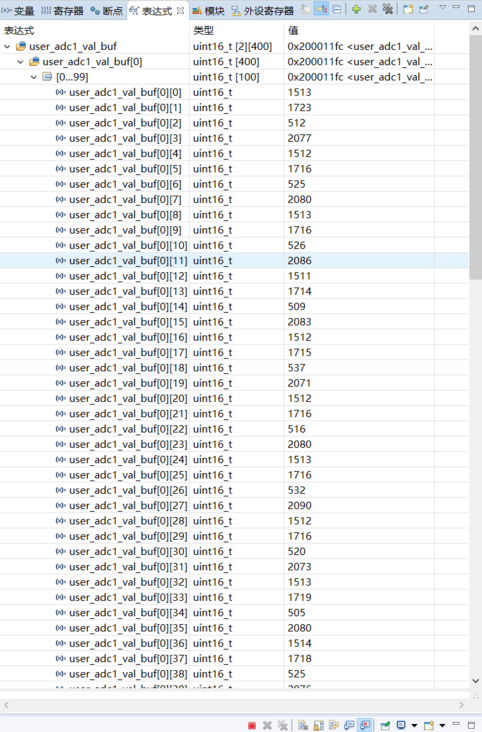 0,4,8,12 of the array It is the saved ADC data of vreint collected in real time, and the power supply voltage of VrefP at this time is 3.265V. It can be calculated that the actual voltage of vreint is 1.2068. The figure below shows the voltage range of vreint officially given.

According to the actual vreint, it can be calculated that the ADC conversion value of vreint is 1497.89 when the VrefP power supply voltage is the standard 3.3V power supply. I think the default configuration has enabled FPU, so floating point numbers are directly used here to improve the accuracy. 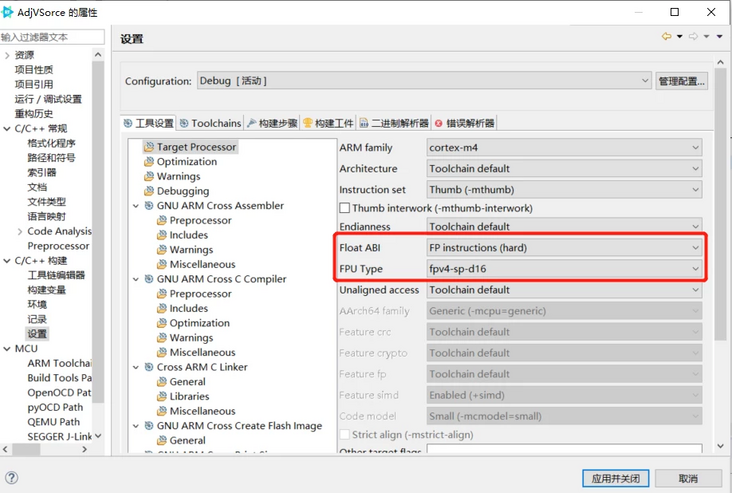 The following is main C implementation of the specific application code. Relatively simple, a voltage control thread is created. Since the voltage regulation has almost no lag for the control cycle of 10ms, the PID control here actually uses only PI.

Specific code, interested friends can have a look. I won't introduce and analyze it a little. For testing, the code is written casually, and there are no comments. Hope to help friends in need. You can also continue to optimize and improve the code on this basis. After uploading the demo video, attach the video address. I wish you all a happy work and study.