Singleton Pattern is one of the simplest design patterns in Java. This type of design pattern is a creation pattern, which provides the best way to create objects.
This pattern involves a single class that is responsible for creating its own objects while ensuring that only a single object is created. This class provides a way to access its unique object, which can be accessed directly without instantiating the object of this class.

1, What is singleton mode?

Singleton Pattern is one of the simplest design patterns in Java. This type of design pattern is a creation pattern, which provides the best way to create objects.

2, Definition and characteristics of singleton mode

Definition of Singleton mode:
A pattern in which a class has only one instance and the class can create the instance itself.
For example, only one task manager can be opened in Windows, which can avoid the waste of memory resources caused by opening multiple task manager Windows, or errors such as inconsistent display contents of each window.
In the computer system, there are also the recycle bin of Windows, the file system in the operating system, the thread pool in multithreading, the driver object of graphics card, the background processing service of printer, the log object of application program, the connection pool of database, the counter of website, the configuration object of Web application, the dialog box in application program The cache in the system is often designed as a singleton.

3, Advantages and disadvantages of singleton mode

Advantages of singleton mode:
1. The singleton mode can ensure that there is only one instance in the memory and reduce the memory overhead.
2. Multiple occupation of resources can be avoided.
3. Set global access points in singleton mode to optimize and share resource access.

4, Structure and implementation of singleton mode

The basic structure and implementation method are analyzed below.

The main roles of singleton mode are as follows.
1. Singleton class: a class that contains an instance and can create it by itself.
2. Access class: class using singleton.
Its structure is shown in Figure 1. 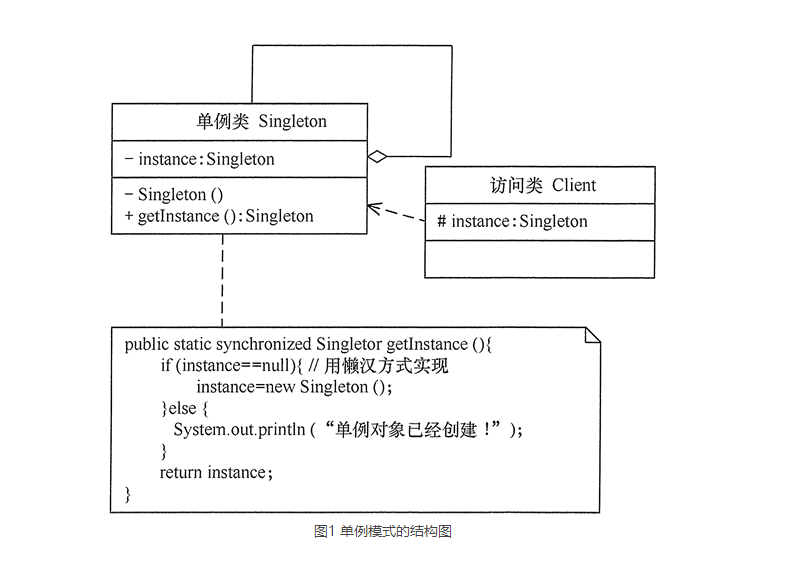 There are usually two implementations of the Singleton pattern.
Type 1: lazy single case 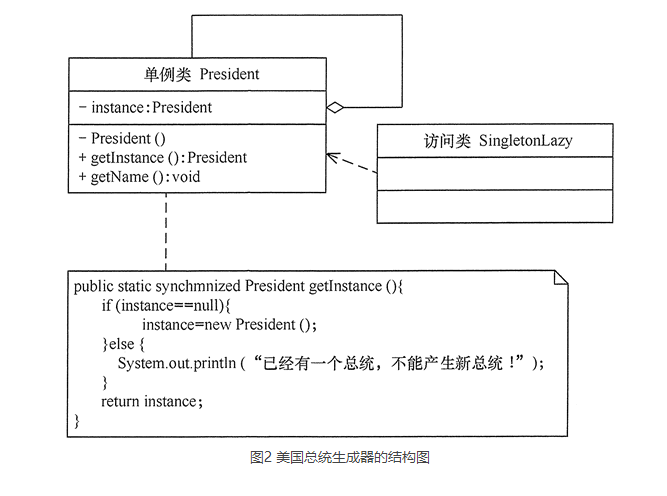 The running results of the program are as follows:

Example 2: the hungry Han single case model is used to simulate the generation of pig Bajie objects.
Analysis: similar to the above example, there is only one pig Bajie, so this example is also suitable for single instance mode. Because this example wants to display the image of pig Bajie (click here to download the pig Bajie image to be displayed by the program), it uses the framework form JFrame component. The pig Bajie class here is a singleton class, which can be defined as a subclass of panel JPanel, which contains labels to save the image of pig Bajie. The customer form can obtain the pig Bajie object and display it.
Figure 3 shows the structure diagram of the implementation of starving Han style single example. 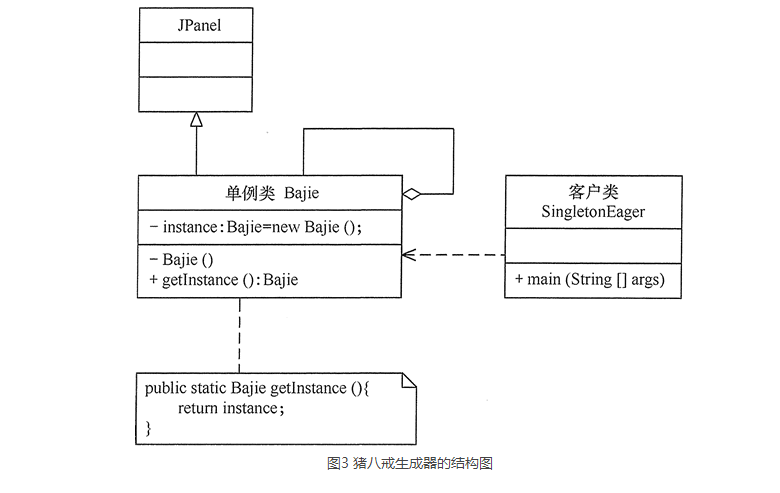 The running results of the program are as follows:

For Java, the singleton pattern ensures that there is only a single instance in a JVM. The application scenarios of singleton mode mainly include the following aspects.
1. For some classes that need to be created frequently, using singleton can reduce the memory pressure of the system and reduce GC.
2. a class only requires the generation of an object, such as a monitor in a class, the ID number of everyone.
3. Some classes occupy more resources when creating instances, or the instantiation takes a long time and is often used.
4. When a class needs frequent instantiation and the created objects are frequently destroyed, such as multi-threaded thread pool, network connection pool, etc.
5. Objects that frequently access databases or files.
6. For some control hardware level operations, or from the system point of view, they should be single control logic operations. If there are multiple instances, the system will be completely disordered.
7. When the object needs to be shared. Since singleton mode allows only one object to be created, sharing the object can save memory and speed up object access. Such as the configuration object in the Web, the connection pool of the database, etc.