After summarizing 11 items, my understanding of Python decorators

Once, in an interview when I was just changing my career to become a programmer, I was asked two questions by the interviewer:

1. What functions have you used decorators to achieve?

2. How to write a decorator that can transfer parameters?

For me, who had very limited practical experience at that time, the first question could only answer some very simple usages, while the second question could not be answered.

At that time, with these two questions, I began to systematically learn all the contents of decorators. These have been collated in their own blog, and today they have carried out a lot of supplement and Corrigendum, published here to share with you. I hope it can provide some reference for the new and advanced friends. 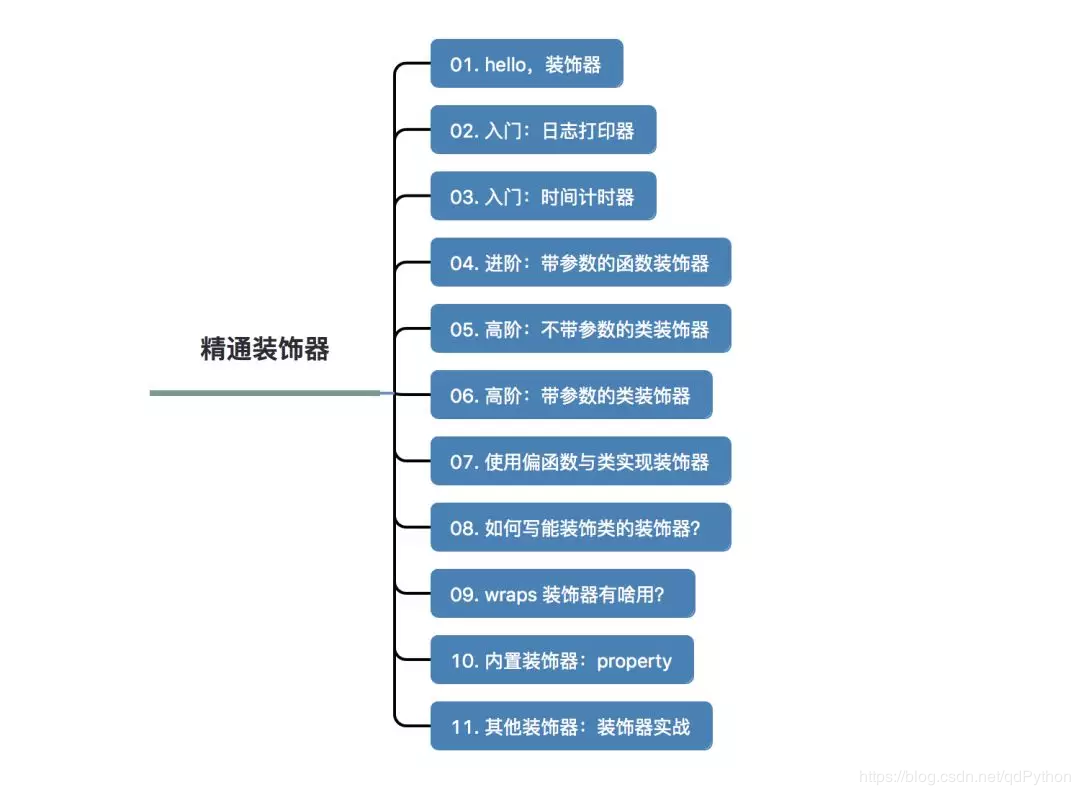 The use of decorators is very fixed

Finally, put the decorator (HAT) on the head of this function (person)

In fact, decorators are not necessary for coding, that is to say, you can do without decorators. Their appearance should make our code

Next, I will explain with examples how to write various simple and complex decorators.

Before function execution, print a line of log to inform the owner that I want to execute the function.

After the function is executed, you can't leave without patting your bottom. We are polite code, and then print a line of log to inform the owner that I'm finished.

If, my business function is to calculate the sum of two numbers. When it's done, put a hat on it.

Then execute the add function.

Let's see what the output is.

Let's take a look at the time counter.
Implementation function: as the name implies, it is to calculate the execution time of a function.

Suppose our function is to sleep for 10 seconds. In this way, we can better see whether the calculation time is reliable or not.

Let's see the output, as expected, for 10 seconds.

Through the above two simple examples, you should be able to understand the working principle of the decorator.

However, the use of ornaments is far more than that. There are still many articles in the study. Let's learn this knowledge together today.

The decorator itself is a function. As a function, if parameters cannot be passed, the function of this function will be very limited, and only fixed logic can be executed. This means that if the execution of the logic code of the decorator needs to be adjusted according to different scenarios, if the parameters cannot be passed, we will write two decorators, which is obviously unreasonable.

You can write it like this. Because this function code is complex and not conducive to learning, it will not be pasted here.

Let's create a fake scene by ourselves. We can pass in a parameter in the decorator, specify the nationality, and say hello in our native language before the function is executed.

What if we implement this decorator so that it can realize parameter passing?

It will be more complex and requires two levels of nesting.

Look at the output.

Run it and see the output

Class decorators with and without parameters are quite different.

Let's specify the WARNING level and run it to see the output.

Most decorators are based on functions and closures, but this is not the only way to make decorators.

In fact, Python has only one requirement on whether an object can be used as a decorator (@ decorator): the decorator must be a "callable" object.

For this callable object, we are most familiar with functions.

In addition to functions, a class can also be a callable object, as long as you implement the call function (the above examples have been touched on).

In fact, the partial functions that are easy to be ignored are also callable objects.

Next, let's talk about how to use a combination of classes and partial functions to implement a different decorator.

As shown below, DelayFunc is a class that implements "call" and delay returns a partial function, where delay can be used as a decorator. (the following code is from Python Craftsman: Tips for using decorators)

Take a look at the execution process

08. How to write ornaments that can be decorated?

There are three common ways to write singleton mode in Python. One of them is realized by decorators.

Here is a single example of my own decorator version.

You can see that we use the decoration function singleton to decorate the User class. Decorators are not very common when they are used in classes, but as long as they are familiar with the implementation process of decorators, it is not difficult to realize the decoration of classes. In the above example, the decorator is just to control the generation of class instances.

In fact, you can refer to the debugging process here to understand the process of instantiation. 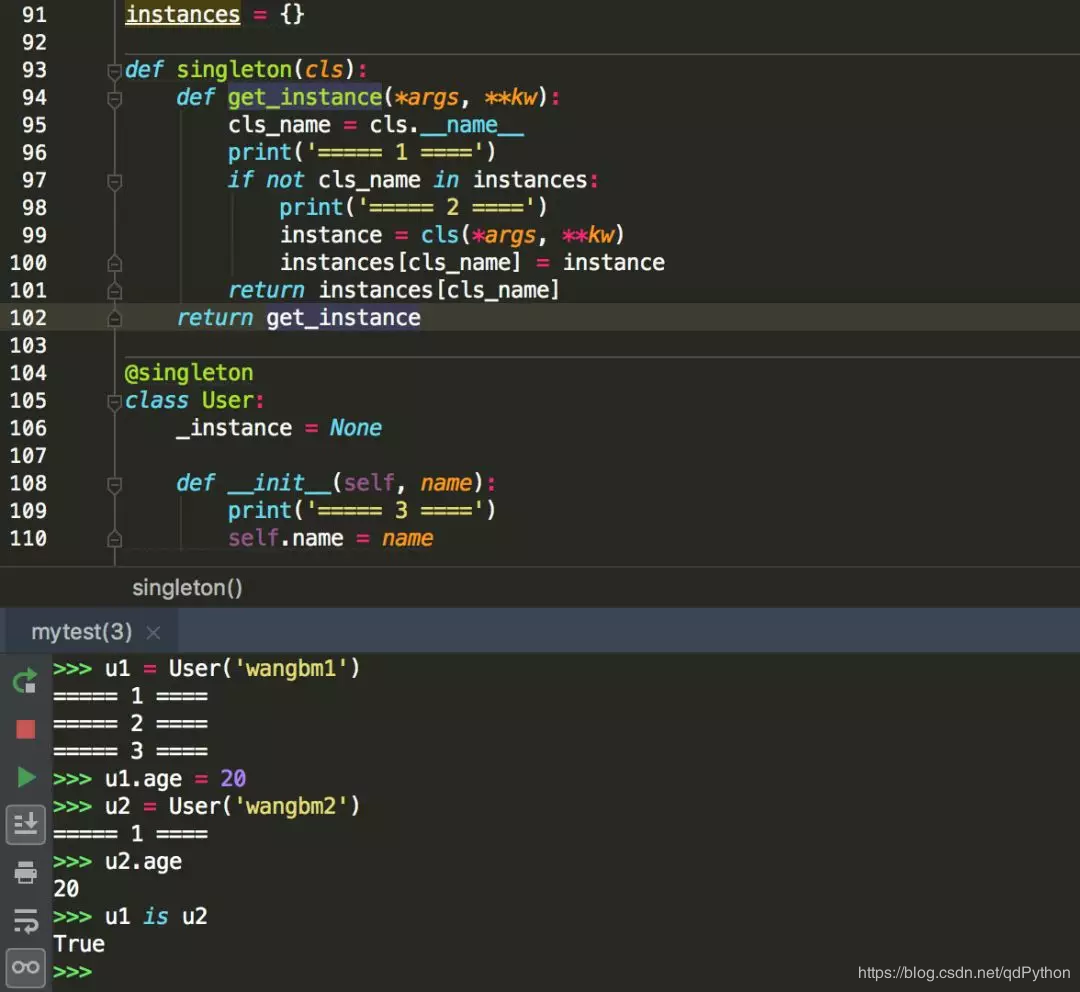 Let's start with an example.

Why is that? Shouldn't func be returned?

How to avoid this situation? The method is to use functools. Wrap decorator. Its function is to assign some attribute values of the wrapped function to the wrapper function, and finally make the attribute display more intuitive.

To be exact, wraps is actually a partial object. The source code is as follows

It can be seen that wraps is actually a function called update ﹣ wrapper. After we know the principle, we can rewrite the above code. Without using wraps, we can also make wrapped. ﹣ name ﹣ print out wrapped. The code is as follows:

All of the above are custom decorators.

In fact, Python language itself has some decorators. For example, property is a built-in decorator that we are familiar with.

It usually exists in a class. You can define a function as an attribute. The value of the attribute is the content of the return function.

However, a little experienced developer can see that it can directly expose the attribute. Although it's very simple to write, it can't restrict the validity of the attribute value. In order to achieve this function, we can write like this.

Although the above code design can define variables, it can be found that both the acquisition and assignment (through functions) are different from what we usually see.
According to our thinking habits, it should be like this.

So how can we achieve this way? Look at the code below.

Functions decorated with @ property will define a function as a property, and the value of the property is the content of the return function. At the same time, this function becomes another decorator. Just like the @ age.setter and @ age. Delete we used later.

The underlying implementation mechanism of property is descriptors, for which I wrote an article.

Let's also introduce here, just to string all these seemingly scattered articles together.

As follows, I wrote a class in which I used property to change math into the property of class instance.

Why is the underlying property protocol based on descriptors? Click PyCharm to enter the source code of property. Unfortunately, it's just a pseudo source code similar to the document, with no specific implementation logic.

However, from the magic function structure of this pseudo source code, you can roughly know its implementation logic.

Here, I implement the class property feature myself by imitating its function structure and combining with the descriptor protocol.

Then we change the Student class to the following

In order to make you less confused, here are two points:

Having said so much, it's better to run it. It's more intuitive.

If you have any questions about the operation principle of the above code, please be sure to understand it in combination with the above two instructions, which are very important.

11. Other decorators: practical operation of decorators

After reading and understanding the above content, you can say that you are a Python expert. Don't doubt, be confident, because many people don't know how to use decorators.

In my opinion, using decorators can achieve the following purposes:

The code structure is clearer and the code redundancy is lower.

I also have a scene recently, which can be well implemented with decorators. Let's take a look at it for the moment.

This is a decorator to realize the timeout of control function. If it times out, a timeout exception is thrown.

You can have a look if you are interested.

All of the above is my sharing of decorators.