Bob Dylan is a great American poet and songwriter. His creative works contribute a lot to American culture and even to the culture of the whole world. This paper uses NLTK to extract nouns from Bob Dylan's lyrics, stores his lyrics in a hash table for word segmentation statistics, and visualizes the lyrics with high frequency using matplotlib.

In the first experiment code, the results are sorted according to word frequency, and the following results are obtained. At this time, we found that the results have many articles, prepositions, etc. We need to clean the data. 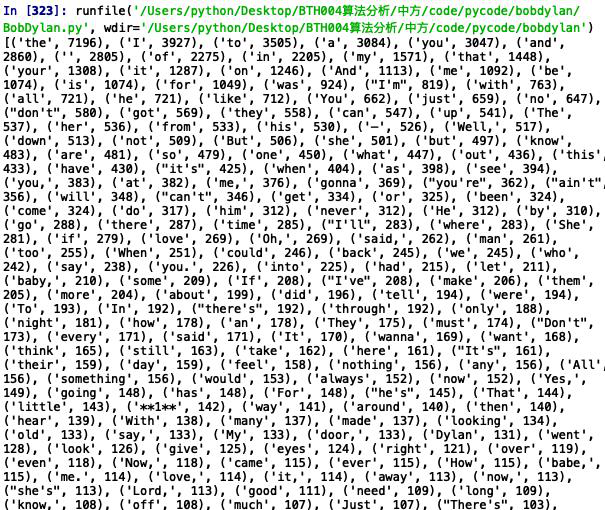 So we rewrote the code, introduced python's nltk natural language processing package, and extracted the nouns from the lyrics. Word frequency statistics are performed and stored in a hash table. Using the matplotlib package to visualize it, we have the following results. 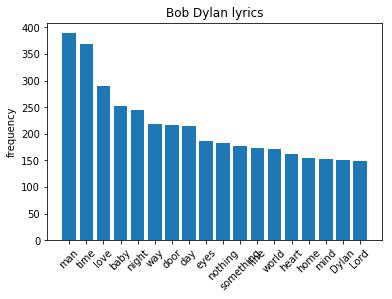 Bob Dylan's music is a tool for his sincere expression of his outlook on life and attitude. In his lyrics, love, world, heart, time and other words appear in a large area, singing about love, loneliness and freedom. His anger was gentle and strong, and his lyrics were beautiful and calm. The action of the Nobel Prize for Literature proves that the most impressive lyrics with great literary expressiveness and influence of the times are the greatest poems and the greatest literary works.

During the experiment, some problems were encountered, such as:

Experiments:
This experiment used many of python's built-in libraries, which made me more familiar with using python. In addition, it's interesting that different libraries have different functions.
Hash tables provide fast insertion and lookup operations with near constant operation time levels regardless of how much data there is in the hash table. They are fast and easy to implement.