It's best to familiarize yourself with CyclicBarrier before you understand it CountDownLatch The two tool classes can achieve the effect of thread waiting, but their focus is different. CountDownLatch can only be used once. When its counter is 0, it will wake up all waiting threads in the synchronization queue, and then it will not be available. The CyclicBarrier counter can be reset to achieve the effect of reuse, so it is more suitable for complex business scenarios. For example, if there is an error in the calculation, you can reset the calculator to make the thread execute again

CyclicBarrier: loop fence (loop barrier), through which a group of threads can wait to a certain state (barrier point) and then execute all at the same time. It is called loopback because when all waiting threads are released, the CyclicBarrier can be reused.

The approximate working principle diagram is as follows: 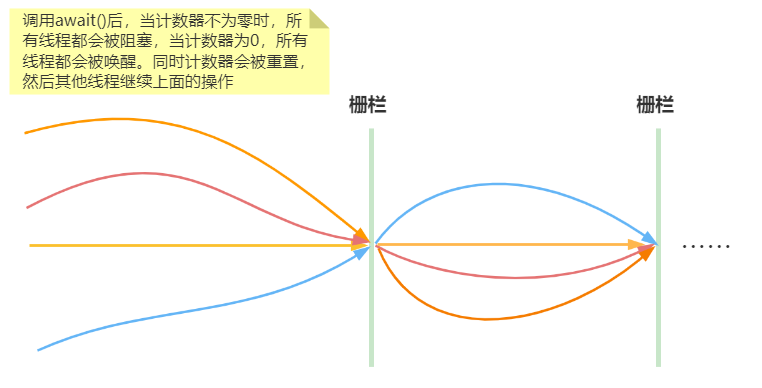 The most important method in CyclicBarrier is await()

In addition to the above, the following methods are provided:

In the following example, the CyclicBarrier(int parties, Runnable barrierAction) construction method of CyclicBarrier is adopted. After each thread queries the commodity price, it calls the await() method to block. When the last thread calls the await() method, it will execute the logic of calculating the average price and wake up the blocked thread

The console print results are as follows:

After reading the CountDownLatch source code, we know that it is implemented through shared locks, and the CyclicBarrier is completed by using ReentrantLock exclusive lock and Condition queue. In terms of implementation, the CyclicBarrier is more complex than CountDownLatch, because it also involves the transfer of threads from Condition queue to synchronization queue, and the source code of this part is a little complex.

Take the multi parameter construction method as an example:

In this construction method, there is an additional input parameter of Runnable type. When all threads reach the barrier, they go back and call its run(). At the same time, the parties and count in the construction method record the number of threads required to cross the barrier, but the parties record a copy, which will be used when the counter is reset, and the count records how many threads need to wait to reach the barrier, This value is decremented by one when each thread calls the await() method

The core method is dowait(). The following is the source code of the whole method, which is divided into three parts to analyze one by one

In the dowait() method, the lock operation is performed first. What is the purpose of this step?

In the dowait() method, the await() and signalAll() methods of Condition will be called, and the calls of these two methods must be used with lock(), which is the same reason that wait() and notify()/notifyAll() must be used with the Synchronized keyword

In the dowait() method, count will be subtracted by one, and then it will be judged whether to block or wake up

If it is not equal to 0, it will call for (;) In the loop, the await() method of Condition will be called

In AbstractQueuedSynchronizer, its internal class ConditionObject implements the Condition interface and await() method

After the last thread calls the await() method, it will transfer the nodes of the condition queue to the synchronization queue and wake up these threads, so that it can jump out of the loop

This method is also very simple. This Node is the same class as the Node in ReentrantLock. When the Node is used for condition queue, it can mainly use the two attributes of nextWaiter and waitStatus of Node

The structure diagram of condition queue is as follows:

fullyRelease() is also relatively simple. First, call the getState() method to obtain the value of state. Because it is an exclusive lock, the return value is 1, and then call the release() method. This method is also very simple, that is, call tryRelease() to change the value of state to 0 with the help of CAS, and then call the unparksuccess () method to wake up the thread blocked by previous lock failure, The source code of the two methods, release() and tryRelease(), has been introduced in the previous ReentrantLock article and will not be repeated here

As described above, after the thread is encapsulated as a node and added to the condition queue, it is blocked again. When do you wake up?

Of course, you have to wait for the last thread to call the await() method. At this time, the value of count has changed to 0, indicating that the thread waiting before can cross the barrier with the current thread.

It can be clearly seen in this code that when the last thread arrives, it will first execute the run() of the construction parameter Runable object

Then call the nextGeneration() method. It can also be seen from the name of this method. It means that the current round of waiting is over and the next round of thread can be executed repeatedly, and the thread wake-up is realized in this method

The above series of method calls are relatively simple. In the doSignalAll() method, transferForSignal() is called circularly from the head node of the condition queue, and the main implementation is also in the method.

Finally, change the state of the previous node to SIGNAL through CAS, indicating that it needs to wake up the threads of the following nodes

Note that the signalAll() of Condition does not really wake up the thread. It just completes the transfer of the node of the Condition queue to the synchronization queue, and changes the state of the front node to SIGNAL, indicating that it can wake up

At this time, the structure of the synchronization queue corresponding to the CyclicBarrier is roughly as follows:

When the last thread calls await(), it will go back to complete all the above operations, and finally call lock in the finally code segment of dowait() Unlock(), and only here can we really wake up the blocked threads in the synchronization queue