3. Corresponding status of each Item

The following describes the status of ViewHolder. The related methods are as follows 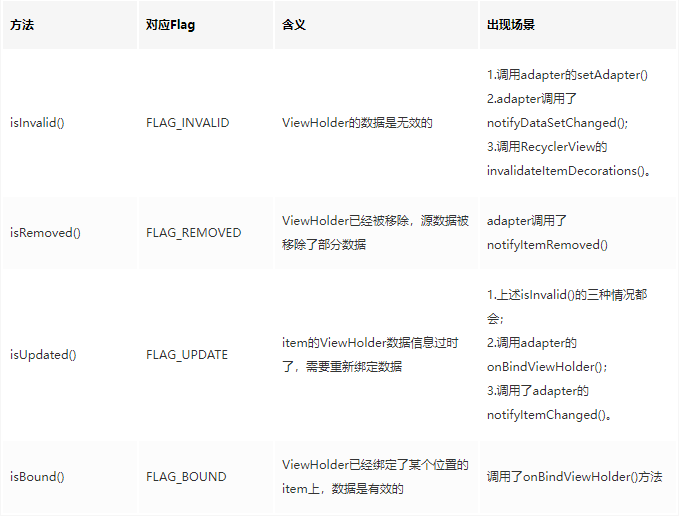 Note: Scrap is only used as a temporary cache for layout. It has nothing to do with the cache during sliding. Its detach and atach only exist temporarily in the layout process. At the end of the layout, the Scrap list should be empty, and the cached data should either be rearranged or emptied; In short, there should be nothing in the Scrap list after the layout is finished.

The above description is inevitably abstract. Let's elaborate and interpret it through a specific example 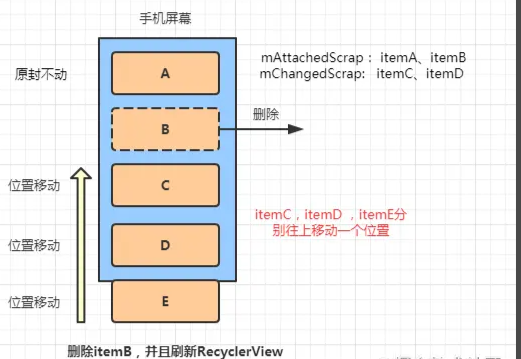 In this case, we delete the data itemA and itemB of a RecyclerView, and then move itemC, itemD and itemE up in turn. There is no doubt that this process will affect the layout parameters of the latter itemView, that is, the parameters required by onLayout(). In this process, the relevant parameters before and after itemA and itemB have not changed, so itemA itemB is stored in attachedsrap, and itemC and itemD are stored in mchangedsrap.

It should be noted that in this process, only the items appearing on the screen are operated. If item e does not appear on the screen, it is thrown into any list

Detailed analysis is as follows

In a mobile phone screen, delete itemB and call notifyItemRemoved() method. If the item is invalid and REMOVED, it will be recycled to other caches. Otherwise, it will be cached in scratch. Then attachedsrap and mchangedsrap will store itemView respectively. itemA has no change and is stored in attachedsrap. Although itemB has been REMOVED, it is still valid, It is also stored in attachedsrap (but it will be marked REMOVED and then REMOVED); itemC and itemD are changed, and the position is moved upward, which will be stored in mchangedsrap. When deleting, the ABCD will enter the Scrap; After deletion, the ACD will come back. A has not changed, but the location of the CD has changed and the content has not changed.
The local refresh of RecyclerView depends on the temporary cache of scratch. When we notify the item of change through notifyItemRemoved(), notifyItemChanged(), the ViewHolder that has not changed is cached through attachedsrap, and the rest is cached by mchangedsrap. When adding itemView, it is quickly taken out from it to complete the local refresh. Note that if we use notifyDataSetChanged() to notify RecyclerView to refresh, the itemView on the screen is marked as FLAG_INVALID and not removed, so instead of using the scratch cache, it is directly thrown into the CacheView or RecycledViewPool pool. When you come back, you can bind the data again.

Let's take a look at the application of a CacheView, as shown in the figure. itemA moves out of the screen first, and then moves into the CacheView. In the process of sliding down or up, judge the moved item. If it is determined to be the previous itemA according to position/id, move it directly from the CacheView

In daily development, we generally can't use ViewCacheExtension, so we've briefly covered it here

The source code of RecycledViewPool is as follows

It can be seen that the RecycledViewPool defines sparearray mscrap, which is a sparearray that saves static class ScrapData objects according to different itemtypes. The ScrapData contains ArrayList mscrapheader, which is the ArrayList that saves the ViewHolder under the itemType.
The cache pool defines the default cache size, DEFAULT_MAX_SCRAP = 5. This number does not mean that the entire cache pool can only cache these multiple viewholders, but the cache number of ViewHolder list s of different itemtypes, that is, the number of mScrap, indicating that there are only 5 groups of mscrapheaders of different types at most. mMaxScrap = DEFAULT_MAX_SCRAP indicates that five viewholders of different types are saved by default. Of course, the value of maxscrap can be set. In this way, the RecycledViewPool caches the viewholders of different ViewType s by type.

RecyclerView needs to set the layout manager before drawing. Otherwise, RecyclerView doesn't know how to draw. Let's start with this part of the source code

It can be seen here that before setting the layout manager, RecyclerView first performs relevant reset and recycling work, then associates LayoutManaer with RecyclerView, and finally requests redrawing. Call the = = requestLayout() = = method requesting redrawing, which will call the onMeasure(), onLayout(), onDraw() methods of RecyclerView to draw trilogy

Here, the LinearLayoutManager will analyze and observe its = = onlayoutchildren() = = method for layout of child views

When = = onLayoutChildren() layout, first remove all child views according to the actual situation. Those viewholders are unavailable; Then, the attached itemviews are temporarily separated by detachandscrapatachedviews() = = and cached in the List.

The function of detachandscrapatachedviews() is to separate all items of the current screen from the screen, take them from the layout of recyclerview, save them to the list, and put viewholders in new positions one by one when re layout. The ViewHolder on the screen is removed from the layout of RecyclerView, stored in Scrap, Scrap includes mAttachedScrap and mChangedScrap, they are list, which is used to save ViewHolder list from RecyclerView layout, ==detachAndScrapAttachedViews() will only be invoked in onLayoutChildren() = =, only when layout is done, will it be eliminated. Then add comes in and rearranges the layout. However, you should note that scrap only saves the viewholder of the item currently displayed on the screen in the recyclerview layout, and does not participate in recycling and reuse. It is simply to take it out of the recyclerview and rearrange it. Items that have not been saved will be put into the cache of mCachedViews or RecycledViewPool for recycling.

In the else branch, detachViewAt() separates the view, and then caches it into the scratch through scrap view()

You can see that attachedsrap is removed (isInvalid()) or the parameter has not changed,
Mchangedsrap is the other case

Go back to = = scrapOrRecycleView(), and enter the if() branch. If the viewHolder is invalid, not removed and not marked, it will be put into the recycleViewHolderInternal() cache, and removeViewAt() = = the viewHolder is removed

If the conditions are met, it will be preferentially cached in mCachedViews. If the maximum limit of mCachedViews is exceeded, add the first data cached by CacheView to the ultimate recycling pool RecycledViewPool through recycleCachedViewAt(), and then remove it. Finally, add() a new ViewHolder to mCachedViews.

Another is that when filling the layout fill(), it will recycle the views out of the screen into mCachedViews or RecycledViewPool:

After tracing through recycleByLayoutState(), you will come to recycler In the public recycling method of recycleview (view) recycler:

Recycle the separated views into the cache pool for later rebinding and reuse. Here comes the recycleViewHolderInternal(holder). As above, cache mcachedviews > recycledviewpool according to priority.

Here are two methods, which correspond to those caused by sliding RecyclerView from different directions;
However, in either direction, the = = fill() method is eventually called to fill the given layout defined by layoutState() = =

tryGetViewHolderForPositionByDeadline() is the method to get the view. It will scrap e, cache, RecycledViewPool, or create and get a ViewHolder according to the given position/id

Deeply understand the drawing process and sliding principle of RecyclerView