Normally, an Activity will go through the following stages: 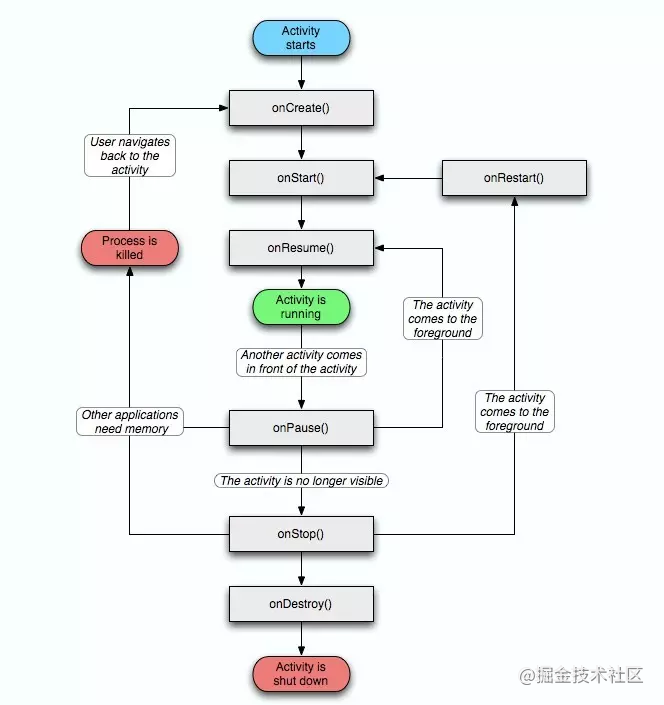 For the life cycle, the following questions are usually asked:

There are four startup modes for Activity: Standard, SingleTop, SingleTask and SingleInstance.

Fragment is proposed by Android 3.0 (API 11). In order to be compatible with the lower version, a set of Fragment API is also developed in the support-v4 library, which is at least compatible with Android 1.6. If fragment is to be used in the latest version, AndroidX package needs to be introduced.

Compared with Activity, Fragment has the following characteristics:

Fragment has the following core classes:

As shown in the figure below. 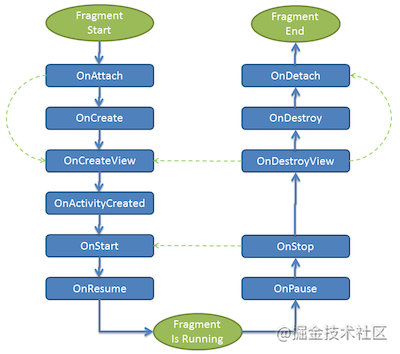 The following is the corresponding relationship between the life cycle of Activity and each life cycle method of Fragment.

Then, in the onAttach() of the Fragment, the parameter Context is strongly converted to the OnFragmentInteractionListener object and passed in.

2.3. 2. Transfer data from activity to Fragment

When creating a Fragment, you can pass the value to the Activity through setArguments(Bundle bundle), as shown below.

There are two main ways to start a Service: startService and bindService.

The following figure is the schematic diagram of starting Service by startService and bindService. 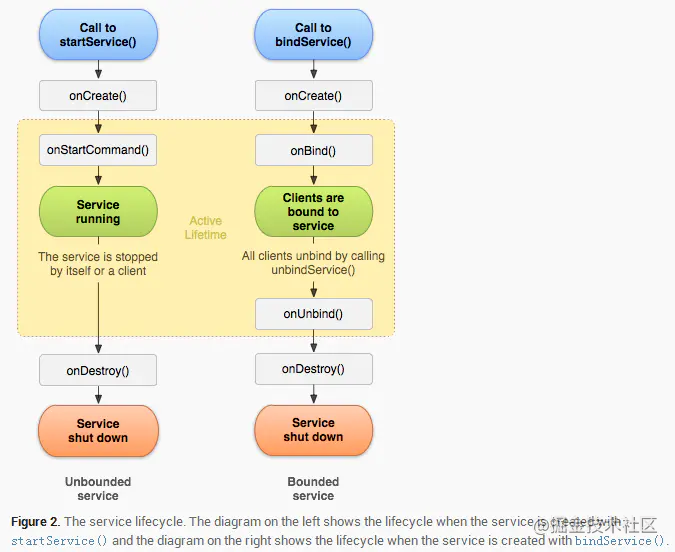 onDestory(): this method is used when destroying a Service.

3.3 Service will not be killed

Now, due to the limitations of the system API, some common Service methods that are not killed are outdated. For example, the following are some previous methods.

Call context When starting a Service in startservice mode, if Android is faced with a lack of memory, it may destroy the currently running Service and rebuild the Service when the memory is sufficient. The forced destruction and re reconstruction of a Service by the Android system depends on the return value of the onStartCommand() method of the Service. The common return values are as follows.

4.1 what is a broadcastreceiver

From different latitudes, broadcastreceivers can be divided into different categories.

Dynamic registration is registered in the code using the registerReceiver method, for example.

Then, we use the sendBroadcast method to send the broadcast.

ContentProvider is one of the four major components of Android, but it is rarely used. If you have seen its underlying source code, you should know that ContentProvider shares data through Binder. Therefore, if we need to provide data to third-party applications, we can consider using the ContentProvider implementation.

The View system of Android itself is very huge. It is difficult to fully understand the principle of View. Here we pick up some important concepts to explain to you.

The drawing process of Android View itself needs to go through three processes: measure measurement, layout and draw before it can be drawn and displayed in front of users.

In the Android system, there are three classes with the ability of event delivery and processing:

For this problem, we need to understand the following: 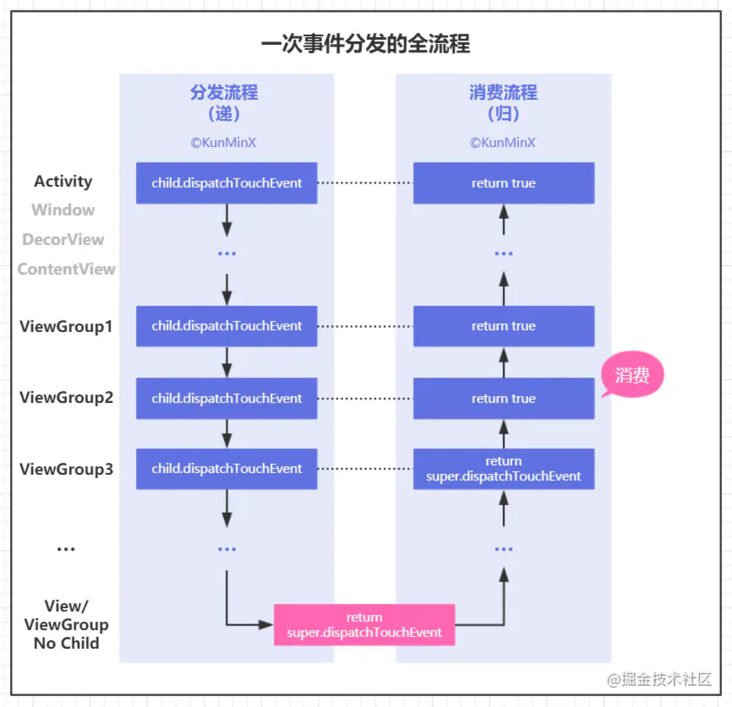 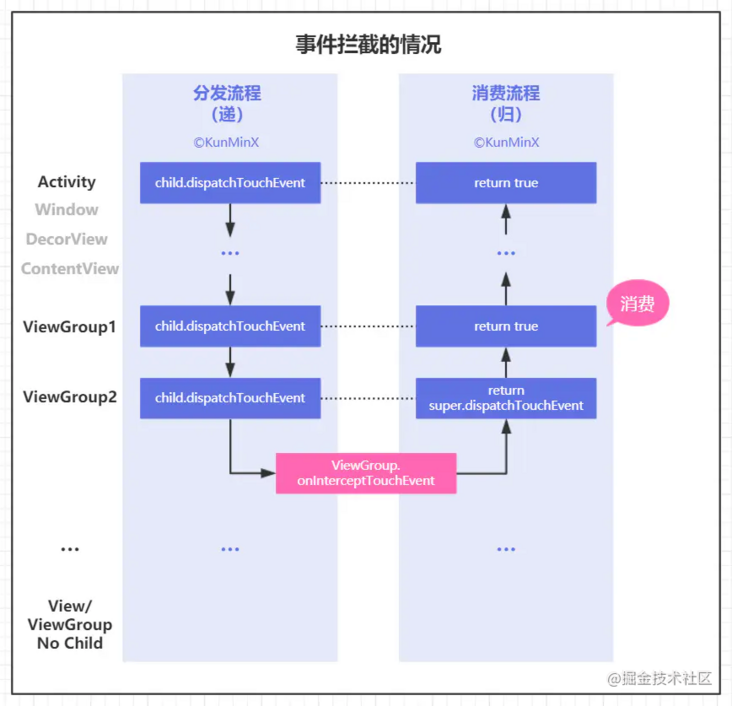 The MotionEvent events of Android mainly include the following:

6.4 relationship among activity, Window and DecorView

First, let's take a look at the source code of setContentView in Activity.

Through generateDecor() new's DecorView, then generateLayout() gets content in DecorView, and finally adds Activity view to DecorView's content through inflate, but at this time, DecorView has not been added to the DecorView. The addition operation requires the help of ViewRootImpl.

The Draw process of Android can be divided into six steps:

The codes involved are as follows:

6.7 difference between invalidate() and postInvalidate()

Process is a running activity of a computer program on a data set. It is the basic unit for resource allocation and scheduling of the system and the basis of the structure of the operating system.

When a program starts for the first time, Android starts a LINUX Process and a main thread. By default, all components of the program will run in the process and thread. At the same time, Android assigns a separate LINUX user to each application. Android will try to keep a running process. Only when memory resources are insufficient, Android will try to stop some processes, so as to release enough resources for other new processes. It can also ensure that the current process that users are accessing has enough resources to respond to users' events in time.

It is a foreground process if:

Visible process refers to a process that does not contain foreground components, but will display a visible process on the screen.

If there is one of the following situations, it is the visible process:

The Service started through the startService() method is not as important as the above two processes, and generally changes with the application life cycle.

Generally speaking, the service started with the startService() method and not belonging to the above two higher categories of processes is the service process.

A process that contains an Activity that is not currently visible to the user (the onStop() method of the Activity has been called). There are usually many background processes running, so they are saved in the LRU (least recently used) list to ensure that the process containing the Activity recently viewed by the user is terminated last.

A process that does not contain any active application components. The only purpose of keeping this process is to use it as a cache to reduce the startup time required to run the component in it the next time. In order to balance the overall system resources between the process cache and the underlying kernel cache, the system often terminates these processes.

There is only one way to start multiple processes in Android, that is, in Android manifest When registering Service, Activity, Receiver and ContentProvider in XML, specify the android:process attribute, as shown below.

You can see that the android:process attribute values specified by MyService and MyActivity are different. Their differences are as follows:

However, starting multiple processes will cause the following problems, which must be paid attention to:

For the first two problems, it can be understood that in Android, the system will allocate independent virtual machines for each application or process. Different virtual machines naturally occupy different memory address spaces. Therefore, objects of the same class will produce different copies, resulting in shared data failure and thread synchronization.

At present, the multi process communication modes supported in Android mainly include the following:

When using Parcelable, you generally need to use the following methods:

According to different functions, Window can be divided into the following types:

Window is an abstract concept. Each window corresponds to a View and a ViewRootImpl. Window does not actually exist. It exists in the form of View. Access to window must be through WindowManager. The implementation class of WindowManager is WindowManagerImpl. The source code is as follows:

The message mechanism of Android is mainly the Handler mechanism.

Android stipulates that the UI can only be accessed in the main thread, because the UI control of Android is not thread safe, and multi-threaded concurrent access will cause the UI control to be in an unexpected state. Why does the system not lock the access to UI controls? There are two disadvantages: locking will complicate the logic of UI access; Secondly, the locking mechanism will reduce the efficiency of UI access. If a child thread accesses the UI, the program throws an exception. In order to ensure thread safety, ViewRootImpl verifies the UI operation, which is completed by the checkThread method of ViewRootImpl.

When talking about the Handler mechanism, it usually includes the following three objects:

When the Handler is created, the Looper of the current thread will be used to construct the message loop system. It should be noted that the thread has no Looper by default, and an error will be reported if the Handler is used directly. If the Handler needs to be used, the Looper must be created for the thread, because the default UI main thread, that is, ActivityThread, will initialize the Looper when the ActivityThread is created, This is why Handler can be used by default in the main thread.

ThreadLocal ThreadLocal is a data storage class within a thread. It can store data in the specified thread, but other threads cannot obtain it. ThreadLocal is used in Looper, ActivityThread and AMS. When different threads access the get method of the same ThreadLocal, ThreadLocal will take an array from their respective threads, and then find the corresponding value value from the array according to the index of the current ThreadLcoal. The source code is as follows:

MessageQueue MessageQueue mainly contains two operations: insert and read. The read operation itself will be accompanied by the delete operation. The corresponding methods of insert and read are enqueueMessage and next respectively. The internal implementation of MessageQueue is not a queue. In fact, the message list is maintained through a single linked list data structure. The next method is an infinite loop method. If there is no message in the message queue, the next method will always block. When a new message arrives, the next method will put back the message and remove it from the single linked list. The source code is as follows.

Available through Looper Prepare() creates a Looper for the current thread. By default, Activity will create a Looper object.

Meanwhile, Looper provides quit and quitSafely to exit a Looper. The difference between them is that quit will directly exit Looper, while quitSafely only sets an exit flag, and then safely exits after processing the existing messages in the message queue. After the Looper exits, the message sent through the Handler will fail. At this time, the Handler's send method will return false. Therefore, the Looper needs to be terminated in time when it is not needed.

Handler the work of handler mainly includes the process of sending and receiving messages. Message sending can be realized through a series of methods of post/send, and post is finally realized through send.

In Android development, we often encounter the problem of long list, so we often involve the optimization of RecyclerView. The reasons for the list jam are usually as follows:

If the nesting level is too deep, you can check the performance of Layout through Systemtrace tool. If it takes too long or calls too many times, you need to check whether to overuse RelativeLayout or nest multi-layer LinearLayout. Each layer of Layout will lead to multiple child measure/layout.

Object allocation and garbage collection although ART is used on Android 5.0 to reduce GC pause time, it will still cause jamming. Try to avoid creating objects within a loop that cause GC. You should know that creating an object requires allocating memory, and this opportunity checks whether the memory is enough to decide whether GC is needed or not.

In addition to the above typical scenarios, the optimization of RecyclerView also needs to pay attention to the following points: