This article belongs to the article in the Android source code exploration column. The list of all articles in the column is linked as follows. You are welcome to read it.

I * * introduction to Handler mechanism**

Handler is a common mechanism in Android, which is mainly used for communication between threads.

1.2 why understand the principle of Handler?

Before, I chatted in a group and said that the handler was often asked in the interview, and then I was sprayed. I said that now it is all MVVM, ViewBinding and other architectures. Who still uses the handler. Indeed, there are more and more frameworks encapsulated in Android, which makes it easier for us to use, and there will be fewer and fewer scenarios to use handler. But using less doesn't mean it's useless. These existing frameworks, even the foreseeable future, are based on the handler mechanism.

For example, we ordinary people drive, maybe as long as we can drive, we don't have to understand the principle of cars. But if you want to be a racing driver, you should have a certain understanding of the mechanism and principle of car operation.

Finally, what are the benefits of understanding the handler principle?

1. The handler mechanism is very classic, which can also be used according to the scene in the process of typing code.

4. The handler can help us find out where the code causes the jam.

The above points will be explained in detail in the following articles.

1.3 what is the role of handler in the interview?

At the same time, Handler is also an Android mechanism that is often asked during the interview.

To sum up, about six points will be asked frequently. These six technical points are specially marked in red, which are easy to be asked in the interview.

As shown in the following figure: the mechanism of Handler in Android is to obtain a Handler object from the sub thread, and send tasks in MessageQueue through this Handler object. Open an infinite loop in the main thread and constantly get the Message task from the MessageQueue. If it gets it, it will execute the task in Messagez. If it doesn't get it, it will enter the sleep state. 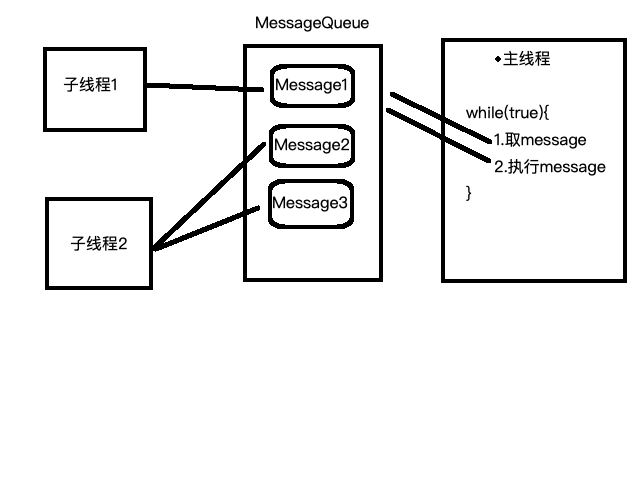 Message: it can be understood as task, the unit of task execution.

MessageQueue: inside is a single linked list, which stores Message tasks.

Looper: it is responsible for processing the Message task, and its loop method opens an infinite loop in the main thread.

We can see that there are many ways to add message. In fact, the sendMessageDelayed method is called in the end.

The general writing methods mainly include the following:

In fact, the sendMessageDelayed method is called.

Take another look at the getPostMessage method:

ok In fact, it is also to build a Message and send it out.

When calling sendMessageAtTime, the second parameter passed in is the execution time.

The execution time is calculated by the current time + delay time.

1. The code looks a little messy. However, the core logic is to insert the current message node into the single linked list according to the latitude from front to back of the execution time. Technical point 2: how is the linked list arranged. Execution time sequence

2. There is a parameter when in message, which will be assigned when it is added to the linked list, and the execution time is recorded.

3. At the same time, wake up sleep through nativeWake. Why Hibernate? It will be discussed in Chapter 4 below. Generally, when there is no pending Message, it will enter hibernate to release CPU resources.

At this point, the message is inserted into the MessageQueue, and the insertion process is completed.

4, The process in which Message is executed

Generally, we don't need to call the prepare method, because after the application is started, looper has been called for us in the main method of ActivityThread Prepare method.

The core logic of prepare is to bind with the current Thread through ThreadLocal. Ensure that a Looper will bind only one Thread.

Call Looper Loop method to start an infinite loop. A check will be made here. If the Looper is not bound to the current thread, an exception will be thrown.

4.3 get the message and try to execute it

1. Messagequeue will be called Try to get message in next (). If you can't get it, it will be blocked. Specifically, we will analyze it in the next chapter.

2. If the message is not obtained and returned, it indicates that the application is in the exit state, so the loop is also closed.

4. We can see that there is logging for input and printing in the code, which is very helpful for our performance monitoring. We will explain it in Chapter 7.

5.msg. The recycleunchecked flag MSG has been used and enters the reusable state.

There are two callback methods,

The callBack in the Message is always executed in this way;

Method 2: customize the Handler and override its handleMessage method.

Here we can clearly see that the priority of callBack will be higher. This is technical point 3: which of callBack and handleMessage will be executed first

First look at the code, which is divided into the following links.

This is a native method, blocked. The CPU sleep mentioned above is realized through the mechanism of nativePollOnce. When this method is called, CPU resources will be released until it is awakened by the outside world. The underlying implementation principle corresponds to the epoll mechanism of linux. We won't analyze it in detail in this article. We just need to know the function of its method.

ptr can be understood as the unique value of a native tag, which is used to identify the binding thread.

timeoutMillis is the timeout. It is mainly divided into three types - 1, 0, > 0.

=-1 is in an infinite blocking state unless awakened by the outside world.

=0 will not block and will be executed immediately.

>0 will block the corresponding time, and then release the blocking state.

PS: the native implementation of nativePollOnce is actually similar to that of Android layer. It also has a blocked circular queue. The underlying implementation mechanism is epoll. Since the native layer is not the core of this article, it will not be extended here. Interested students can leave a message. I

5.2 traverse the linked list to find the message that can be used

2. First get the non sleep time of the current system;

3. First try to get the header of the linked list, then there is no data in the linked list. Then assign nextPollTimeoutMillis to - 1. In the next cycle, it will enter the infinite blocking state and be awakened directly. This corresponds to the native wake-up mechanism mentioned in Chapter 2.5.

4. If the header node is not empty, judge its execution time and compare it with the current time;

5. If the execution time is less than the current time, calculate the difference nextPollTimeoutMillis. And it will jump out of the Message selection process. And in the next cycle, nativePollOnce will use this value to sleep the corresponding time. Ensure that as soon as the sleep time arrives, it happens to be the execution time of the head node.

6. If the execution time is greater than the current time, it indicates that the node can be executed. Change the head node to the next level node. And through Message Markinuse marks that the current Message has been used.

7. Return the message object found in the previous step

1. A barrier Message is actually a Message with an empty target.

2 asynchronous messages must be used with barrier messages.

5 note here that the header node is still a barrier and the message has not been removed. Therefore, normal messages will not be executed.

As the name suggests, it is a leisure task. When there is no Message to be executed at present, it will trigger the execution of IdelHandler. Generally, we can put those tasks that need to be executed in the main thread but have low priority in IdelHandler, such as preloading the next page, second screen loading, etc.

Looking at the code, I can see that when obtaining a Message, if no Message is obtained, it will enter the process of executing IdleHandler.

There can be multiple idlehandlers, which are stored in MeesageQueue. During each execution, they are converted into an array and executed in turn.

It should be noted here that the callback of IdleHandler will be executed only once and will be removed after execution.

Technical point 6: how to monitor the main line jam

In Chapter 3.3, we mentioned the object of logging. When we look back at the code, we can clearly see that logging will be called before and after message execution. The time between these two prints can be considered as the execution time of the callback in the message.

Let's take a look at the Printer class corresponding to logging, which is actually an interface,

And we found that logging allows us to set it on our own initiative. Looper.com is used Mlogging object.

Therefore, we just need to create a Printer object and register it in Looper. Then we can judge which meepage has timed out through the time of two callbacks. The following code can monitor the scenario where all Message messages of the main thread execute for more than 100 milliseconds.

If we only know whether the main route is stuck or not, it will not be enough. We must also want to know where the card is? This is also what BlockCanary wants to solve. However, we also have a simple implementation here. One class can complete performance monitoring.

1. We can start a sub thread to continuously capture the stack state of the main thread every specified time (such as 20 milliseconds).

2. When the println callback notifies that the callback execution of Message starts, we store the captured stack in the Map each time.

4. So by printing the same stack times, we can know where the jam is caused. I often use it in the development and debugging stage, which is very easy to use.