https://edu.csdn.net/course/detail/35475
This article has been published on Public Number. Thank you for your interest and look forward to communicating with you. 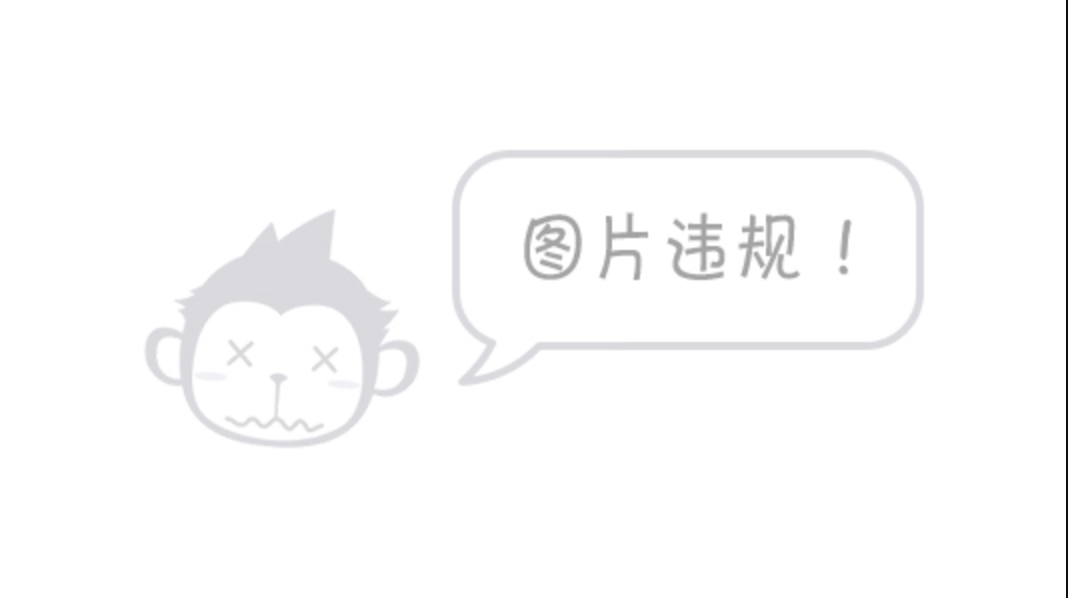 This method fails to get resources in shared mode, performs queue and wait operations, and the waiting threads spin in this method after being waked up until they get the resources.

A special analysis of this point is:

You already know that there are two places to call doReleaseShared, one is when a resource is released, and the other is when a subsequent node of a queue header node gets a new header (setHeadAndPropagate)

Take acquireSharedInterruptibly as an example

Enter the method to determine the thread interrupt flag first, it seems very concerned about whether the thread executing the code is interrupted, haha.

Throwing an exception exits the spin and executes cancelAcquire(node). As detailed in the previous section on this method, it sets the waitstatus of the incoming node to the CANCELLED state.

In addition to interrupts, AQS also provides an API with a timeout mechanism based on the Unsafe park(boolean isAbsolute, long time) method.

For example, the doAcquireSharedNanos method in AQS:

Semaphore is often used to limit the number of threads accessing resources.

Take the operation of a parking lot as an example. For simplicity, assume that the parking lot has only three parking spaces, all three parking spaces are empty at first. If five cars arrive at the same time, the doorman allows three of them to enter directly, then drops down the car block. The rest of the cars have to wait at the entrance, and subsequently the cars have to wait at the entrance. At this time, a car left the parking lot. When the doorman learns, he opens the car Block and puts one outside into it. If he leaves two more cars, he can put two more, so he can go back and forth.

In this parking lot system, parking spaces are public resources, and each car is like a thread, and the gatekeeper is the semaphore.

Similar to the ReentrantLock implementation, it also has a Sync class inside, and the subclasses NonfairSync and FairSync implement unfair and fair modes, respectively.

Semaphore implements the tryAcquireShared method on its own.

For fair scenarios, the Semaphore implementation is the same as ReentrantLock:

The core is the hasQueuedPredecessors method, which has been analyzed in detail in the previous section and is consistent with other code and unfair pattern code.

As with the previous get operation, the release operation requires modifying the state value using a loop + cas, throwing an exception in the case of an int value overflow.

The following illustrations are used:

1, three threads enter the wait queue and wait. The state value changes from 2 to 0 after the first two threads get success. Note that the node pointed to by the head is a virtual node, so there are actually four nodes in the wait queue at this time. The last node has zero waitstatus because there are no successor nodes, and the other nodes have SIGNAL waitstatus.

After 2,5 seconds, the first two threads that succeeded execute release one after the other, which executes to the doReleaseShared method to wake up the subsequent node of the head. We assume a concurrent scenario where the first thread in the doReleaseShared method code successfully executes compareAndSetWaitStatus(h, Node.SIGNAL, 0) and wakes up a subsequent node thread, T3, where the head's state is 0, The second thread executes compareAndSetWaitStatus(h, 0, Node.PROPAGATE) to update the header status to PROPAGATE, then assumes that the awakened thread has not yet updated the header pointing, the second thread exits after determining h == head is true. The awakened thread continues to execute doAcquireShared's spin code because the resource has been released and it succeeds, then executes the setHeadAndPropagate method to set the head and continue waking up the subsequent nodes, since the old head state in this scenario is PROPAGATE and the new head state is SIGNAL, any one of which meets the requirements for waking up the subsequent nodes. After waking up T4, you will also get success. Execute setHeadAndPropagate. The new head state is SIGNAL so it executes doReleaseShared and meets the wake-up successor node condition. Wake up T5, noting that there are only two resources here, but it will wake up one more thread. After waking up T5 executes doAcquireShared's spin code, but the resource acquisition fails. Then modify the state of the head node to SIGNAL, and the thread continues to wait. 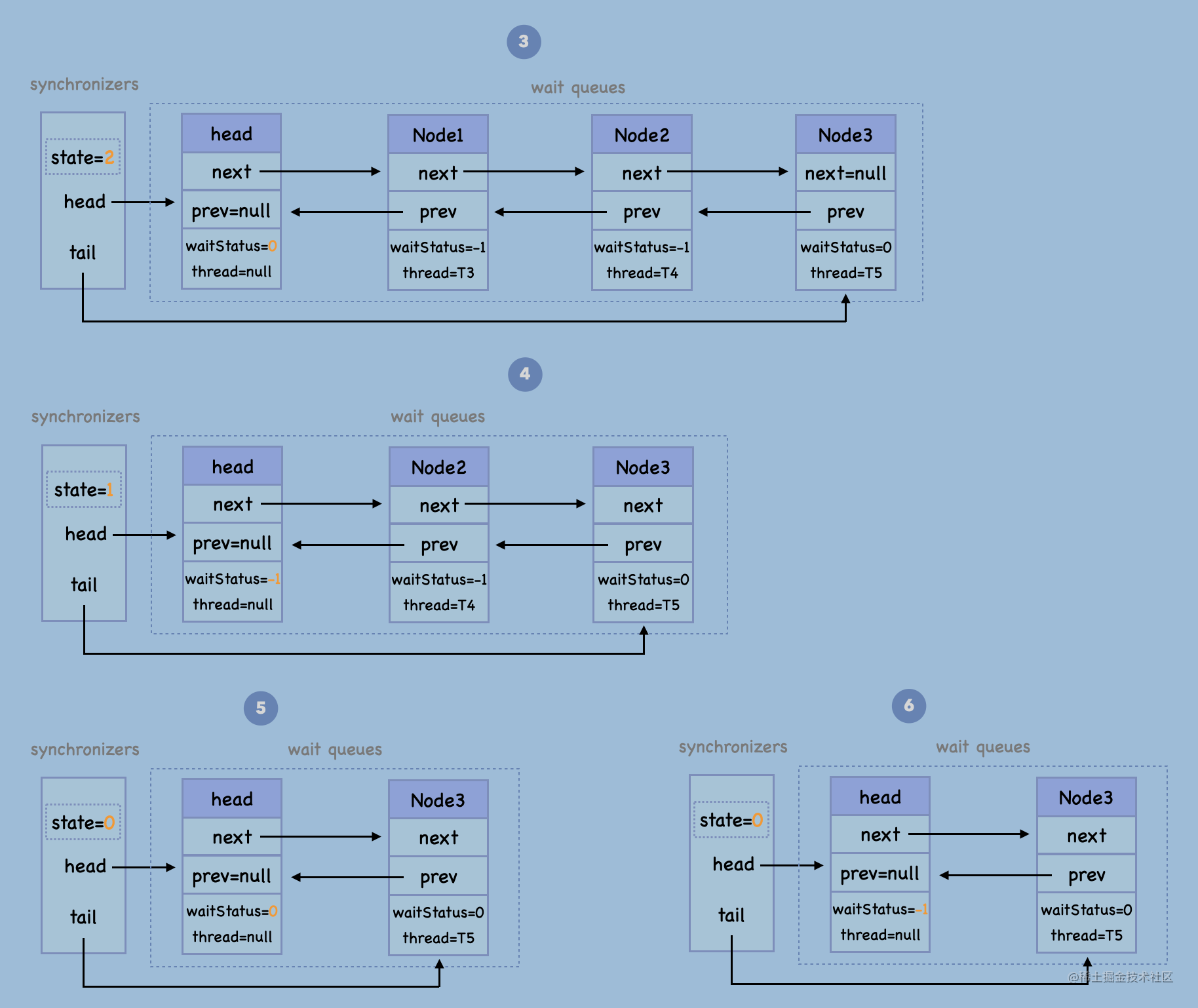 Allows one or more threads to wait for a set of operations to complete in another thread. The comment translates its function as a latch, and all threads calling await wait before the lock until it calls countDown; Or CountDownLatch initialized to N can be used to have a thread wait until the N thread has completed an action, or an action has completed N times.

To implement CountDownLatch, it should also be simple to use AQS state counts and synchronous queues to block threads.

Source implementation is unfair and unfair, and a subclass Sync inheriting AbstractQueuedSynchronizer is implemented internally.

This tryAcquireShared is different from the previous synchronizer implementations. Participating in acquires does not require use or change the state value. Instead, it judges that when the state is 0, the operation to obtain succeeds or the acquisition fails.

The custom release operation ensures that the state value can only be reduced to 0, not to a negative number, and is still a loop + cas operation implementation.

Await is get, countDown is release. When initializing CountDownLatch, you need to pass in a countDown value, which indicates the number of times a thread must call countDown before passing await. The initialization state is countDown, and the value of the state is reduced by 1 after each countDown execution.

From the previous implementation code, you can see that after the initialization of CountDownLatch, executing await before the state becomes 0 will enter the synchronization queue and wait. Each time countDown is executed, the state will be reduced by 1 and the wake-up waiting thread will be triggered when the state becomes 0.

Two typical uses of the CountDownLatch class are written on the annotation:

The PROPAGATE status of waitStatus in shared mode is a bit abrupt, but when you check online, there's a bug story, and you'll take a closer look at the bug scenario and fix code. I find it very helpful to understand the competitive scenario that arises when a head successor node is waked up by a release operation in shared mode and a wake-up thread wakes up the successor node after a successful wake-up.

There are reproducible test codes and detailed descriptions in the bug description that can be combined to help understand.

There was a race condition that could prevent a releaseShared from being propagated through to a parked thread, leaving the thread parked while a permit existed.

So the PROPAGATE state is introduced, which is when the head node is judged to be 0 while waiting for a node in the queue. This means that if the successor node of the head must have been awakened and executed, the head node will be changed to PROPAGATE state. If it is the last resource (propagate=0), but also if h.waitStatus < 0 still triggers wakeup. In the unparkSuccessor method, any state less than 0 is reset to 0, and PROPAGATE does not affect other processes.

2, AQS supports both interrupt and non-interrupt modes, and the timeout API handles interrupts, while interrupt scenarios change the state of nodes to cancel instead of deleting them at that time. These canceled nodes are removed from the queue when they wake up.

3. The synchronizer Semaphore and CountDownLatch based on AQS share mode are described above. It is very simple to implement these two synchronizers based on AQS internal mechanism, which is also the advantage of AQS.

4. This is the second article on AQS source code, and two more articles are expected. The next one focuses on the implementation of the condition queue.