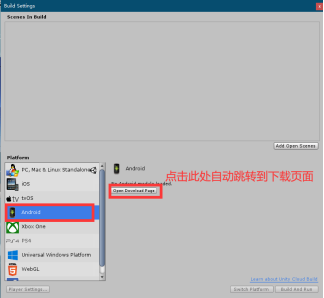 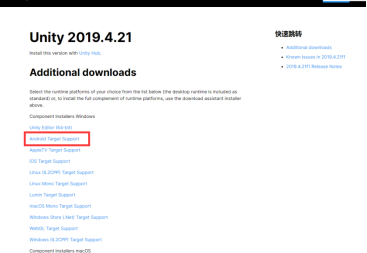 (3) : after downloading, install it in the same directory as this version. Then restart Unity. At this time, click File - build settings and select Android platform. 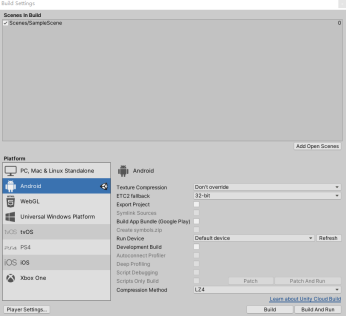 (4) : SDK and JDK installation
For versions before unity 2019, you need to download the SDK and JDK separately and install the specified. (this method is not recommended. It is cumbersome and is likely to make mistakes)
The jdk and sdk modules can be directly added and installed when installing Unity in versions after Unity 2019. (the version before 2019 may also be OK, but I tested 2019) 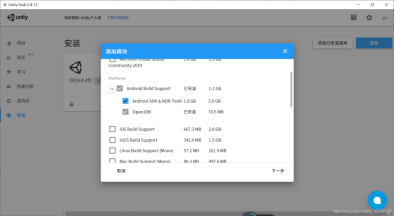 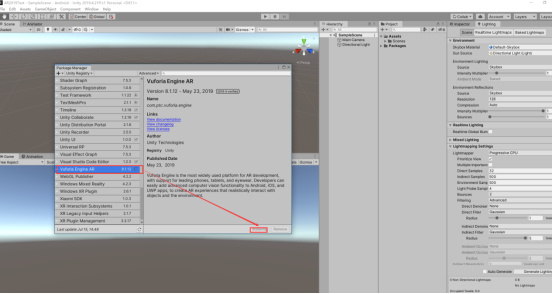 (2) : open the player settings panel, in other setting s, go down to android TV Compatibility and uncheck it. 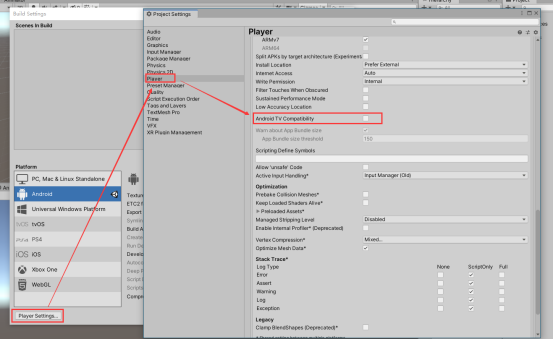 (3) : select XR setting and tick the vuforia augmented reality option, as shown in the figure below

(2) After clicking, enter the following page to create the project, and then click OK to apply for the key: 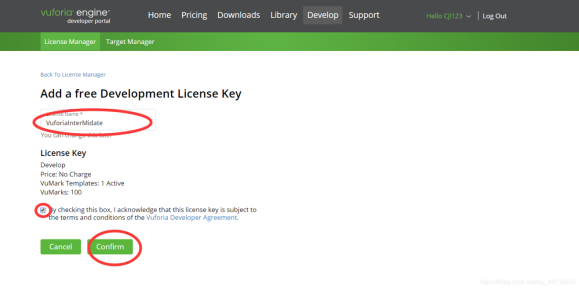 (3) After clicking, the following page will appear. The key you applied for is in the red box in the figure below. 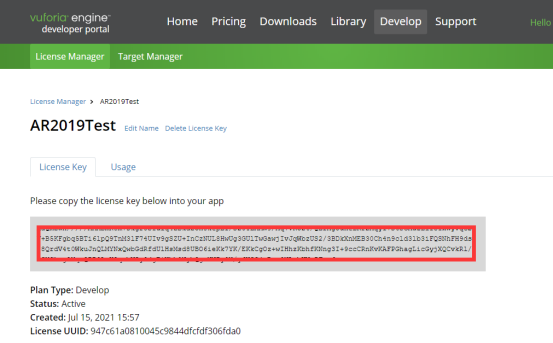 (4) Add the applied key to the Unity project that has just configured the AR development environment, as shown in the following figure:
Now delete the Camera that comes with the scene, right-click VuforiaEngine – ARCamera to create an ARCamera, and then click ARCamera to add the key. 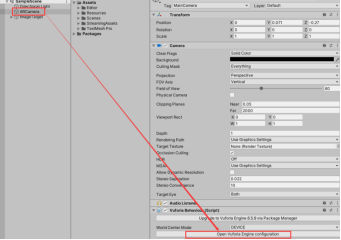 (5) Next, paste the previously applied key into the red box below 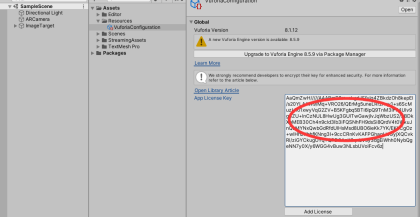 (1) Go back to the official website of Vuforia, follow the steps below to open the following page and create an identification diagram database 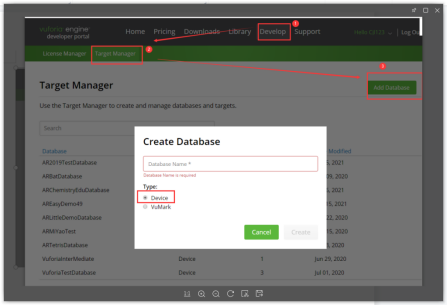 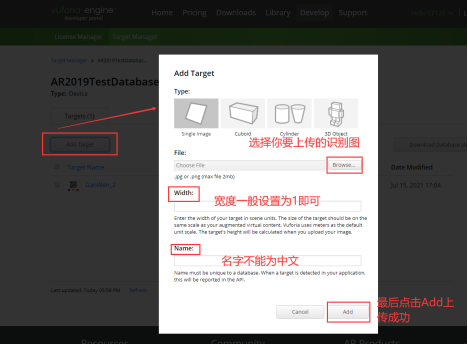 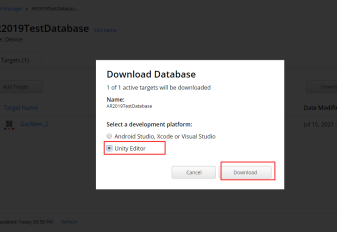 1. Scan and identify the appearance model of the diagram

(1) Method 1
The first method is the default method of Vuforia. If there are no special requirements for the generation model, this method is sufficient.
The steps are as follows:
① : import the identification diagram data set we downloaded in the previous step into the Unity project with the environment configured in the first step.
② : right click VuforiaEngine - Image in the Hierarchy layer to create an ImageTarget.
3. Place the model that needs to be placed in the ImageTarget created in the second place as its sub object, then adjust it to a position and angle that you think is appropriate.
PS: don't hide the model, just keep it displayed. If you do this, you can conduct packaging test.
Scan the identification diagram and the model appears, which means that the AR development environment is successfully built and can be developed in the next step.
(2) Method 2
The second method is to replace the model generation method with the one you want in the default method.
The specific steps are as follows:
① : Click ImageTarget on the hierarchy panel, find the Default Trackable Event Handler script on it, then copy one, rename it, and replace the renamed Default Trackable Event Handler with the default mounted one.
② : double click to open the script we copied and renamed, and then find the OnTrackingFound and OnTrackingLost methods in the script.
OnTrackingFound: when the identification image is found, the methods in this method will be executed.
OnTrackingLost: when the recognition picture is lost, the method in this method will be executed.
③ : replace the default generation method of the two methods with the one we want,
As shown in the figure below:

(1) The finger slides on the screen to follow and rotate the model
Just mount the script shown below on the model that needs to implement this function.

(2) Two fingers zoom on the screen to control the zoom of the model
Just mount the script shown below on the model that needs to implement this function.

3. Collection of other common functions of AR 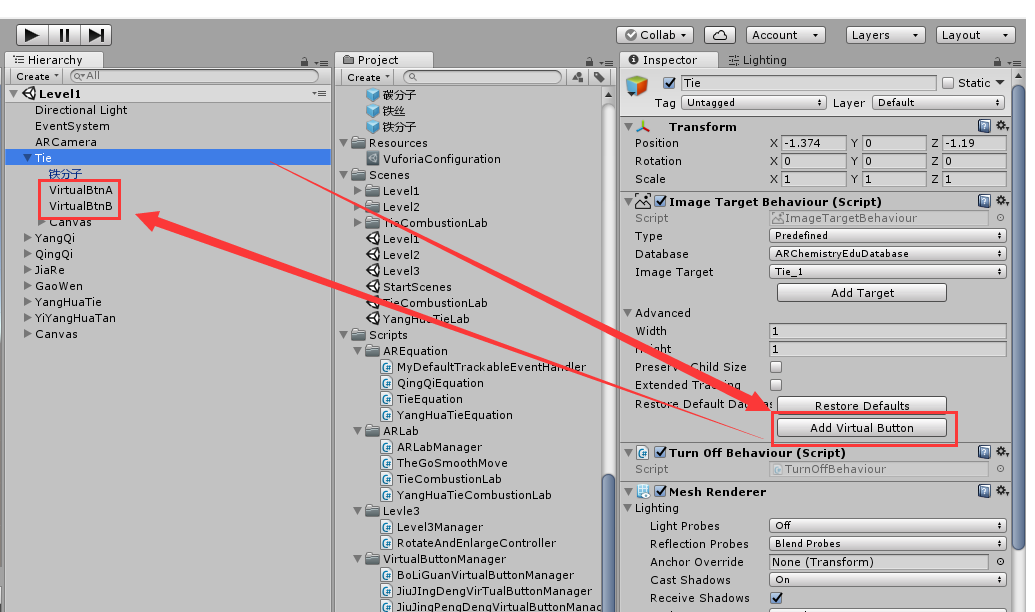 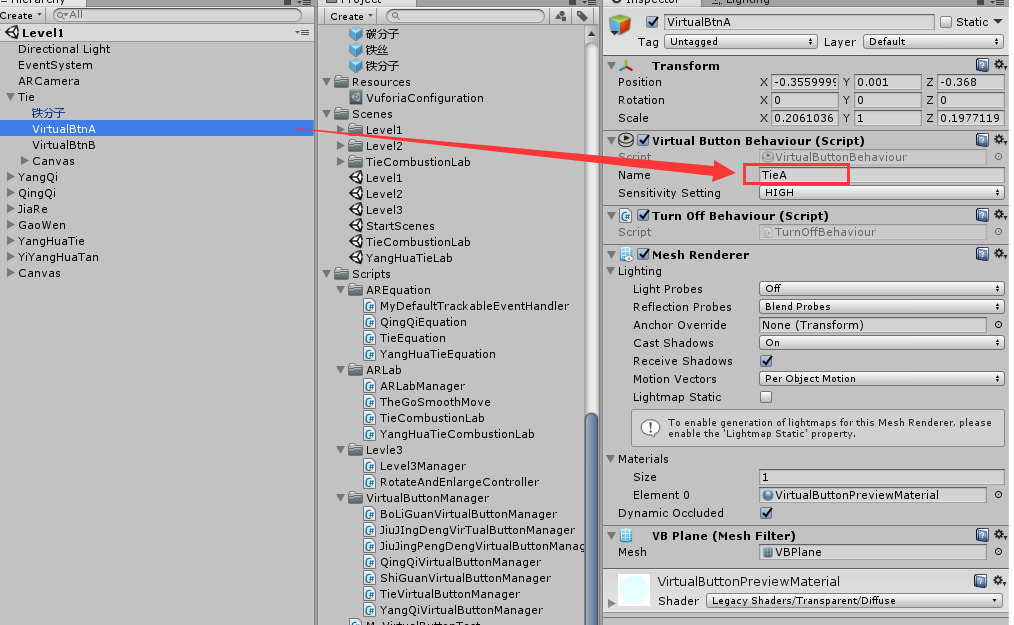 (3) Expand the tracking function (card removal) (Ps this part of the function has not been measured yet, and will be updated comprehensively and in detail when necessary in the future)
① : as shown in the figure below, check extended tracking to realize the card removal function of the identification diagram (only in static environment) 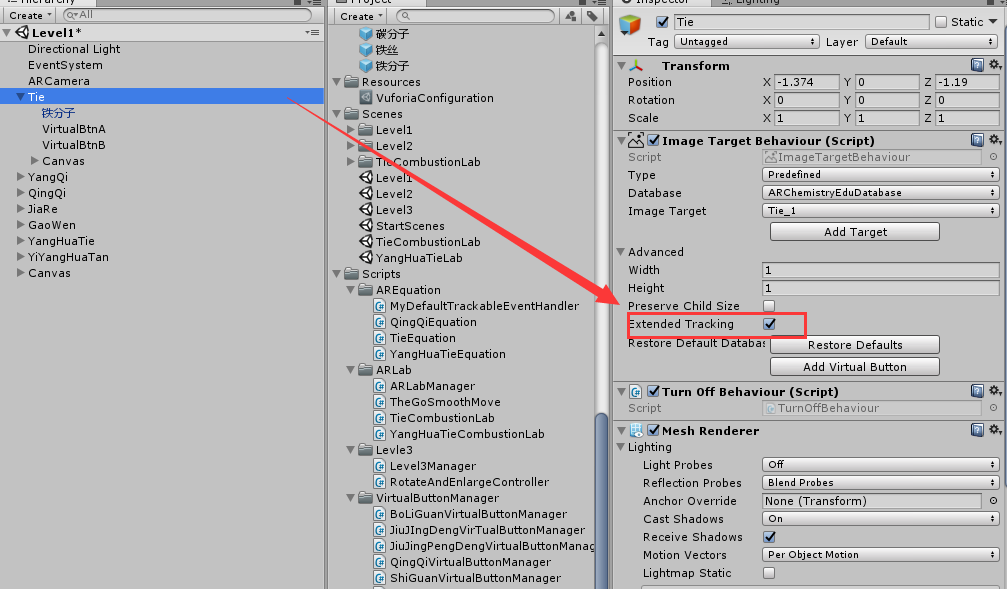 Dynamic card removal can also be realized through code 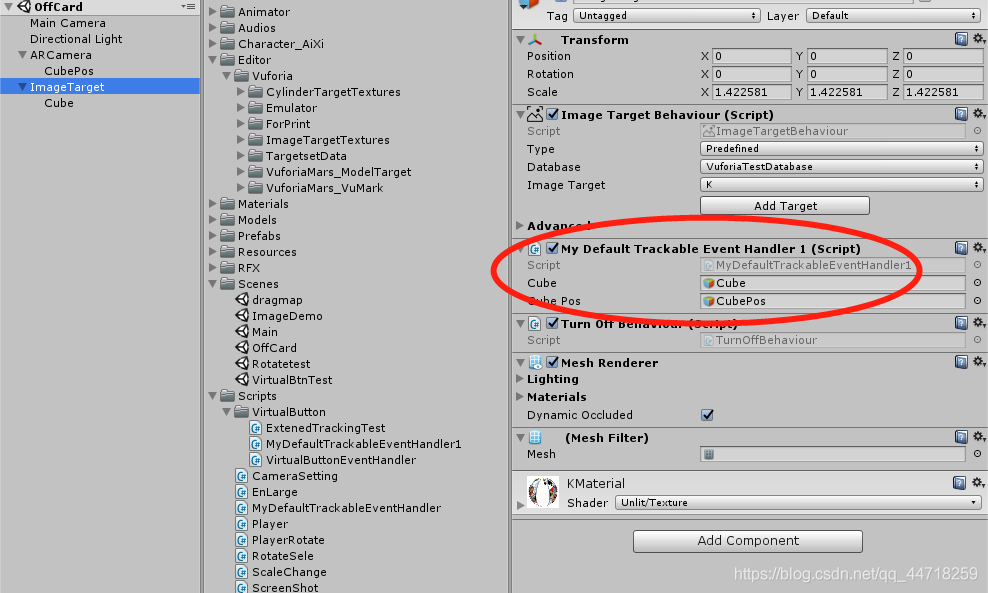 When the tracking target is lost, fix the cube in the middle of the screen
When the target is tracked again, the cube is displayed in the original position

Other functions of AR will be updated in this article in the future.