This paper introduces the basic knowledge of C language functions, including function classification, definition and declaration, nested call, chain access and recursion. Each call is accompanied by a simple program.

Tip: the following is the main content of this article. The following cases can be used for reference

stay computer science Subroutine( English : Subroutine, procedure, function, routine, method, subprogram, callable unit) is a part of code in a large program, which is composed of one or more statement blocks. It is responsible for completing a specific task and has relative independence compared with other codes.

Function is equivalent to a subroutine. Some library functions are provided in C language. Users can also customize functions to realize some functions. When the general program needs to execute this function, you can call the function directly.

Library function: a series of statements provided in the basic library of C language, which are convenient for programmers to develop, such as printf() printout, scanf() input, etc. To put it bluntly, the function statements we usually use in development are library functions, which have been defined in C language and can be used directly, but some functions need to introduce header files before use, such as #include < stdio h>.

For library function learning, you can log in to www.cplusplus.com COM, which contains C and C + + library functions. Direct search will have corresponding introduction, header files, usage methods and examples. 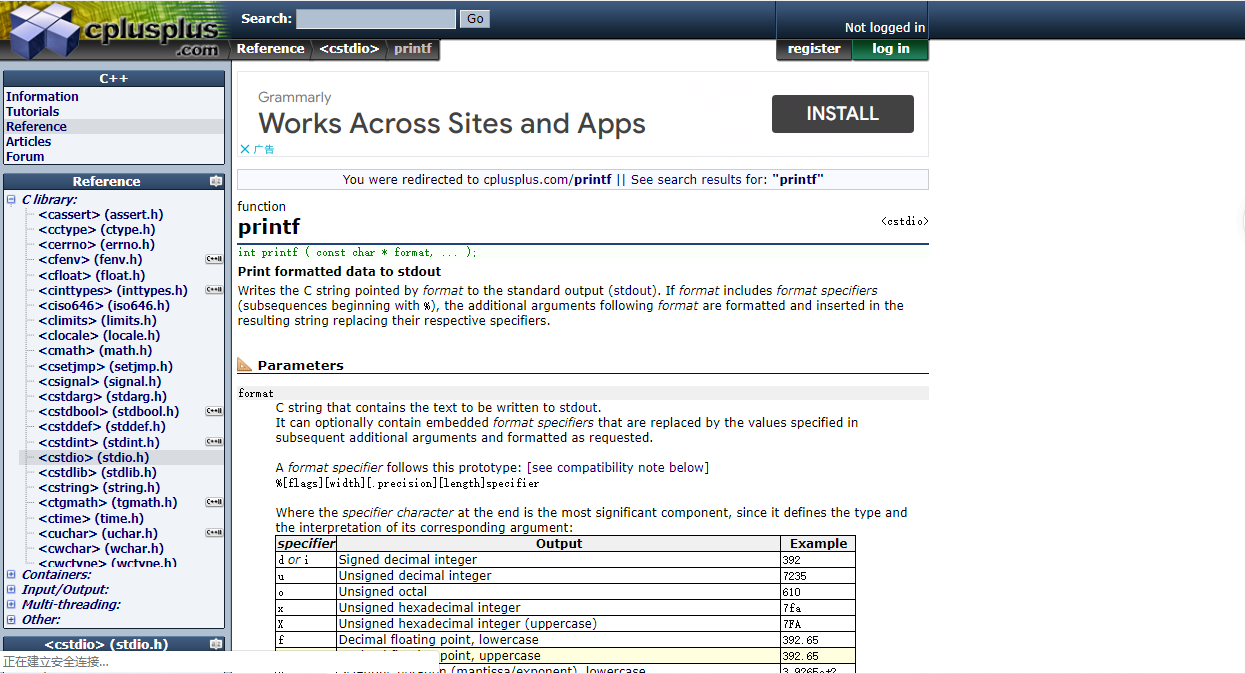 User defined function: this type of function is designed by the user to realize some functions. When defined, it contains four elements: return type, function name, incoming parameter and function body.

Arguments can be constants, variables, expressions and functions. No matter what type, they must have a definite value. When the function is called, the value is passed to the user-defined function.

The parameter transfer process is divided into value transfer and address transfer. The above program belongs to value transfer call. Refer to the following program for the difference between the two.

The result of the above code is as follows:

Call another function in a function. Function can not be nested but can be nested. An example is as follows: exchange 1() is nested in exchange 2().

The programming skill of the program calling itself is called recursion. Recursion as a algorithm stay Programming language Widely used in. A process or function In its definition or description, there is a method to call itself directly or indirectly. It usually transforms a large and complex problem layer by layer into a smaller problem similar to the original problem. The recursive strategy can describe the multiple repeated calculations required in the problem-solving process with only a small amount of program, which greatly reduces the amount of code of the program. The important idea is to make big things small.

There is a limiting condition. When this condition is not met, recursion will not continue

Each recursive call is getting closer to the limiting condition, that is, the program cannot recurse indefinitely

The function calls itself repeatedly, and "passes" down layer by layer until the limit conditions are met, and then "returns" back layer by layer. The example procedure is as follows:

The above is the basic content of C language functions. If you provide some help, you will not be responsible for this editing. Next, the application examples of functions will be updated.