Basic use of vuex4 (typescript)

Ask yourself more why every day. You always have unimaginable gains. A rookie Xiaobai's growth path (copyer)

This blog mainly introduces the basic use of vuex4, from creating a store object, Then, the internal attributes of the store are explained one by one (that is, the five major and core of vuex: state, getters, variations, actions and modules). The explanation is mainly in terms of types, parameters and so on. The content is a little long and can be collected and read slowly (hee hee)

Vuex is designed for Vue JS application development state management mode + library. It uses centralized storage to manage the state of all components of the application, and uses corresponding rules to ensure that the state changes in a predictable way. 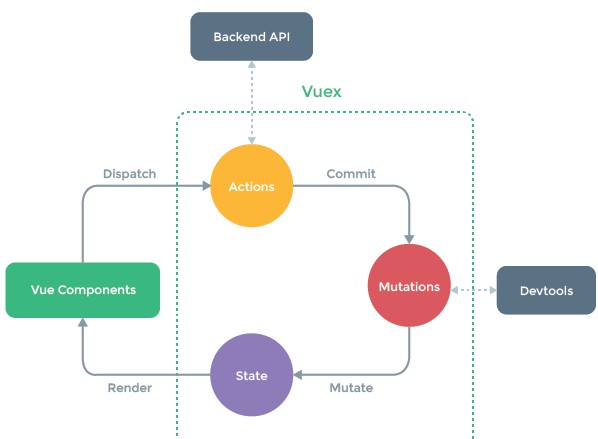 I won't describe it specifically. I understand everything. I can't tell what I don't understand (hahaha)

A method, createStore, is provided in vuex4 to create a store object

If you don't want to see the of generic analysis, you can skip the reference section directly

Analyze the type of createStore

According to the above interface, we can see that generic S is to limit the type of state

Store is a generic class

What is returned is an instance object of the Store class

Create a store instance object, and its type is defined as IRootState

Register in the project's APP

In this way, the store can be used directly in each component.

Where data is stored (data warehouse), state can be a function or an object

Above, we have defined a state data, so we can show it in the component. There are two types of classification:

Note: the above situation is a little special. If we manually install vuex, ts will give an alarm if it does not know $store, but it will not affect the operation process of the project. But for most people, they certainly can't accept the warning of the wave line. The scenario is as follows:

How to solve this problem and make ts know $store?

In the project created by vue3, there is a file, ships Vue d.ts

Borrow the calculated API provided in vue3, and then show it (the above warning file will not exist here)

You also need to use a function useStore, which is provided internally by vuex. Because this cannot be used in setup, you can't use this in vue2$ Store form.

The effect of the above two forms is the same. (whichever you choose is up to you)

The count example here is not easy to demonstrate, so I listed other data for demonstration (better reflected)

Code analysis: the state data here is coder, which is a data. If the total number of people is displayed in the interface, Getters is a good choice (in fact, another case is that the component directly gets the value in state for calculation and display. Imagine that if the total number of people is required in many places, it needs to be written many times). Write it directly in getters, so that it can be used in many places without writing the same code repeatedly.

Displayed in the component, the two forms are the same as state

In the above example, you can see that one of the parameters is state, which is the state in the store. analysis:

ts type analysis of getters. If you don't want to see it, you can skip it directly

It can be found from the above that createStore receives a parameter, which is an object. The type of the object is StoreOptions. One of the properties is getters, which is defined as follows

The existence of modules is considered here

During the above analysis, we know that the four receiving parameters are: state, getters, rootState and rootGetters,

Of course, the existence of modules is considered here, so this will be discussed when explaining the module below.

Here, we are the same as Store, so we also explain why gettertree < s, s > passes two same generics, and the state and rootState here are congruent, and getters and rootGetters are congruent

Personal opinion: Although the attribute in getters is a function, please regard it as an attribute. (because () is not required when using)

1. What do mutations do?

Changes is the only way to change the state of a store in vuex.

2. How to trigger the method in mutations?

The commit attribute in the instance object created by createStore is a method, and the received parameters can be in the form of string and object (payload: submit payload)

3. Can functions in mutations be asynchronous?

No, the synchronization code must be used in the mutation (an important principle). For example, during the log of the mutation, devtools needs to capture the snapshot of the previous state and the next state. However, during the asynchronous function, devtools does not know what to execute, so it can not capture, so the state is an untraceable state

ts parameter type analysis of changes. If you don't want to see it, you can skip it directly

It can be found from the above that createStore receives a parameter, which is an object. The type of the object is StoreOptions. One of the attributes is mutations, which is defined as follows:

From the above type analysis, we can see that the method in mutation receives two parameters: state and payload (optional)

mutation can only modify the state in the current module

In the above, the words with the only error prone feeling are easy to write wrong, and then produce bug s. If you want to solve the above problem, use:

Constant instead of Mutation event

In this way, errors can be reduced, even though the words are written incorrectly. Moreover, this has the advantage that you can analyze at a glance what changes have been executed without constantly folding and looking for code in the changes.

There are mainly two forms: string and object

1. Can action directly modify the state?

No, you can only modify the value of state in the store, so the action submits the change, and let the change modify it

2. How to trigger the method in actions?

The dispatch attribute in the instance object created by createStore is a method, and the received parameters can be in the form of string and object (payload: submit payload)

3. Can asynchronous functions be written in action?

Yes, action is specifically used to handle asynchrony. After the asynchronous execution is completed, the mutation is triggered to modify the state and make the state traceable.

ts analyzes the parameter types of action. If you don't want to see it, you can skip it directly (it's recommended to see it because it's complex)

It can be found from the above that createStore receives a parameter, which is an object. The type of the object is StoreOptions. One of the attributes is actions. The type definition is as follows:

From the above types, we can roughly analyze:

The method in actions generally receives two parameters, and the second parameter is optional

context is an object that contains the following attributes: commit, dispatch, state, rootstate, getters, and rootgetters

The existence of payload lies in whether we distribute to action and whether we carry parameters.

Case 1: no parameters are carried

Due to the use of a single state tree, all the states of the application will be concentrated in a relatively large object. When the application becomes very complex, the store object may become quite bloated. Therefore, it is necessary to divide the modules, so the idea is relatively clear, which is also conducive to the division of labor and development of the team.

ts analyzes module types. If you don't want to see them, you can skip them directly

So what is the type of countModule?

As can be seen from the above, it is the same as the basic instance created by createStore, except that there is an additional attribute named (which will be mentioned later)

Therefore, the type of defining a module is determined

S: Is the type qualification of state in the module

R: Is the type qualification of the state in the root store

Step 2: register the counting module in the root store

Start with the topic:

1. Distinction between state in root store and state in module

2. The difference between the mutation in the root store and that in the module 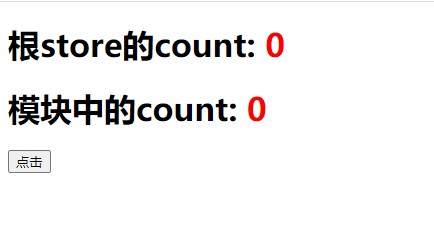 Effect after clicking the button 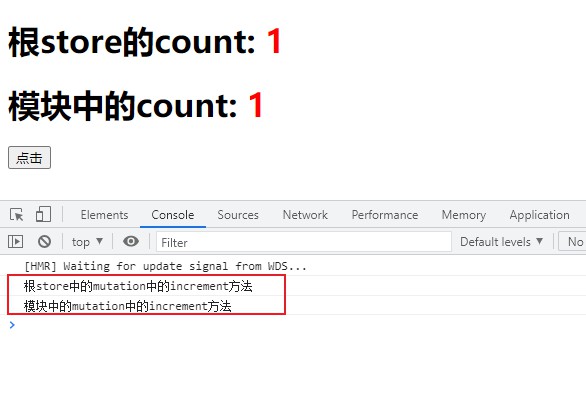 Through the above tests, we know that the increment with the same name in the commit will be triggered, whether in the module or in the root store.

For example, like the example code above (we can imagine this understanding).

getters and actions have the same effect.

In vuex4, to handle similar effects above, you need to use namespaces

When analyzing the type of module created, there is an attribute named, which is a boolean value to remind us whether we need to open the namespace.

The module triggers the mutation in the root store

Is it possible to modify the mutation in the root store after the action in the module gets the data asynchronously? This should be the case. So how to deal with this situation?

When analyzing the type of action above, one type is specific to the module

There is a root attribute here, which is used to tell whether to modify the mutation in the root store

The basic usage of vuex is roughly like this. It is not very different from vuex3. After learning vue2 before, you can easily accept it.