Today is the third day of learning rust. First summarize what you learned yesterday so that you can learn something new ~

Hello Cargo is not too difficult, so follow the instructions in the book step by step.Learned the commands cargo build, cargo run, cargo test, etc. and also introduced the addition of dependency libraries: adding dependencies under [dependencies] in cargo.toml (refer to the solution of the previous note if you encounter slower downloads during this process); and updating the dependency packages: each dependent version is recorded in cargo.lock to prevent a change due to versionNew resulting bug.

Chapters 2 and 3 are the basic variables and language rules of rust, which can be found in each chapter's code notes.

Chapter IV: Ownership
Ownership, as a unique and important feature of rust, makes rust have memory security, which can effectively avoid the problem of floating pointer and floating variable.When rust runs the code, ownership determines the valid range of each variable and when to use the drop command to free up space for that variable.

This chapter uses the more complex StringString data type as an example.Consider the following code:

In this sentence, the value of s1 is assigned to s2. rust is handled as: s1 out of scope, s1 is no longer the value of valid at this time, so if s1 is called later, rust will error:

A chart shows the process: 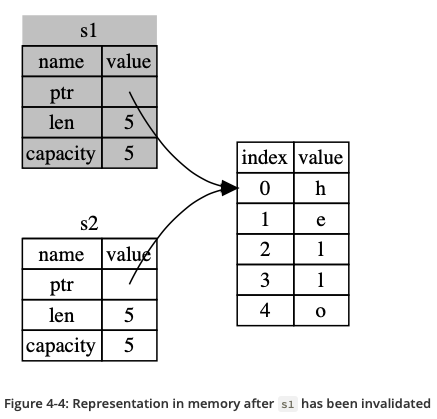 Unlike here are common data types, such as i32, f64, char, and other simple data types.Because stack is used as the storage method, its calculation, push, and pop are fast.Thus, there is no move operation similar to String type, which is a simple copy

For String, if you don't want to use the move described above, you can use the clone operation:

Chapter V Structural Sense and C Language are not too different, see Code Notes for details, let's not talk more about it here ~

After a day of study, my back ached and sore.