LeetCode485: given two binary trees, write a function to check whether they are the same.

If two trees are structurally identical and the nodes have the same value, they are considered to be the same. 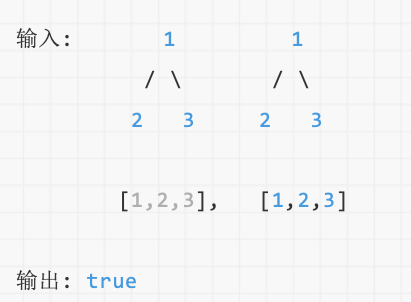 That's exactly what happened. Look at the code:

Non recursive solution can refer to BFS traversal of the tree, that is, width first search, also known as breadth first search. It is traversed layer by layer, as shown in the following figure:

BFS code of binary tree is as follows:

For this problem, we can use two queues, one for the first tree node and the other for the second tree node.

Although the code is a little long, the principle is relatively simple. Let's look at the code below: