Queue is often used to solve production consumer problems. Queue interface and some general abstract methods are defined in Java

The above list is only the general methods of ordinary queues. The blocking Queue BlockingQueue in Java inherits the Queue interface, adds two abstract methods with blocking function, and provides two overloaded methods that can be blocked, offer() and poll:

As can be seen from the definition of blocking method below, InterruptedException exception will be thrown for any method that will be blocked

The common methods of BlockingQueue are summarized as follows:

In addition to the characteristics of blocking, blocking queue has another important characteristic: capacity, which is divided into bounded and unbounded. There is no absolute sense of boundlessness, but this boundary is very large and can put many elements. Take LinkedBlockingQueue as an example. Its capacity is integer MAX_ Value, which is a very large number. We usually think it is unbounded. There are also some blocking queues that are bounded, such as ArrayBlockingQueue. If the maximum capacity is reached, it will not be expanded. So once it's full, you can't put any more data in it.

At the same time, the blocking queue also starts the function of resource isolation. In complex services, after the completion of service A, you only need to throw the results into the queue. You don't need to care about the next steps. Service B will obtain tasks from the queue to execute the corresponding services, which realizes the decoupling between services and improves security.

Here are some common blocking queues and some core source codes

ArrayBlockingQueue is a typical bounded thread safe blocking queue. Its capacity needs to be specified during initialization. Its internal elements are stored in an array. Take put() method as an example, ReentrantLock is used to ensure thread safety, and blocking and wake-up are carried out through the two conditions notEmpty and notFull of the condition queue

Because the put() and take() methods of ArrayBlockingQueue use ReentrantLock for synchronization, and only one method can be executed, the performance will be poor in the case of high concurrency.

Thinking: why does ArrayBlockingQueue adopt the method of double pointer ring array?

For an ordinary array, a shift operation is required when deleting array elements, resulting in its time complexity of O(n). However, for a double pointer ring array, there is no need to shift, and only two pointers need to be moved respectively.

LinkedBlockingQueue is a blocking queue based on linked list. By default, the size of the blocking queue is integer MAX_ Value. Because this value is very large, LinkedBlockingQueue is also called unbounded queue, which means that it has almost no boundaries. The queue can grow dynamically with the addition of elements, but if there is no remaining memory, the queue will throw an OOM error. Therefore, in order to avoid the machine load or full memory caused by too large queue, we suggest to manually transfer the size of a queue when using it.

LinkedBlockingDeque is an enhancement to LinkedBlockingQueue. Its top-level interface is Deque, which defines richer methods to operate the queue. It can be seen from the method name. These methods break the inherent rules of queue first in first out and provide API s that can operate from the beginning or the end

SynchronousQueue is a BlockingQueue without buffer. The insertion operation put() of the producer thread into the element must wait for the removal operation take() of the consumer. Its model is as follows: 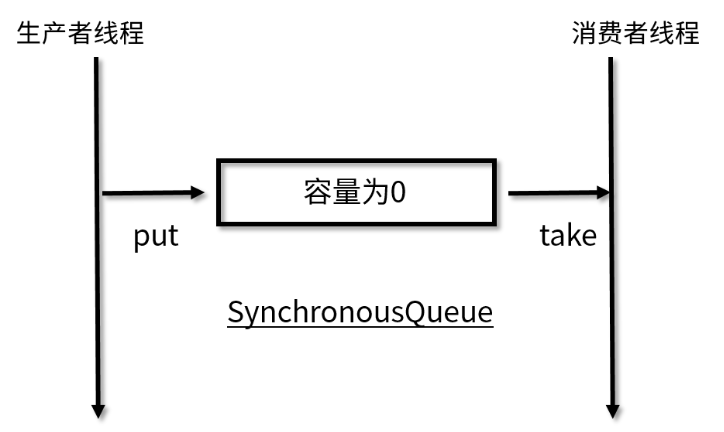 Because SynchronousQueue does not need to hold elements and its function is to pass directly, it is very suitable for exchange in transitive scenarios. Producer threads and consumer threads synchronously transfer some information, transactions or tasks

A common scenario of synchronous queue is in executors In newcachedthreadpool(), because the number of producer requests (creating tasks) is uncertain, and these requests need to be processed in time, using SynchronousQueue to allocate a consumer thread to each producer thread is the most efficient way. The thread pool will create new threads as needed (new tasks arrive). If there are idle threads, they will be reused. After the threads are idle for 60s, they will be recycled.

The following analyzes its implementation principle in combination with the source code:

Next, take TransferQueue as an example to briefly analyze the operations of elements entering and leaving the queue. put() and take() of SynchronousQueue will call the transfer() method to add or obtain elements

Let's analyze the transfer() method of TransferQueue. Before analyzing this method, take a look at its internal class QNode. QNode is used in TransferQueue to record elements and blocked threads. UNSAFE is also used to obtain the offset between elements and the next node, and modify the corresponding value directly through CAS. There are many CAS methods in QNode, which are not listed here.

The general internal structure of TransferQueue has been introduced above. Next, we will focus on the implementation of the transfer() method,

There is an important method awaitFulfill in transfer(), which will do spin blocking

PriorityBlockingQueue is an unbounded array based priority blocking queue. Although it is unbounded, it can specify the initialization capacity of the array during initialization. Its unbounded is based on its dynamic capacity expansion.

At the same time, PriorityBlockingQueue is a priority queue. Every time it goes out of the queue, it will return the elements with the highest or lowest priority. Its construction method provides a custom Comparator comparator. By default, it uses natural ascending order.

It can also be seen from the following construction method that the thread safety of the queue is guaranteed by ReentrantLock. At the same time, it should be noted that PriorityBlockingQueue cannot guarantee the order of elements with the same priority

If PriorityBlockingQueue simply uses array operation to sort the removal of inserted elements, its performance will be very low, and it uses the maximum and minimum heap to insert or remove data. The size heap is only a logical operation mode, and its storage structure is still array

Binary heap: a special binary tree with certain constraints on the basis of complete binary tree. According to different constraints, binary reactor can be divided into two types: large top reactor and small top reactor.

The maximum and minimum heap meet the following characteristics: 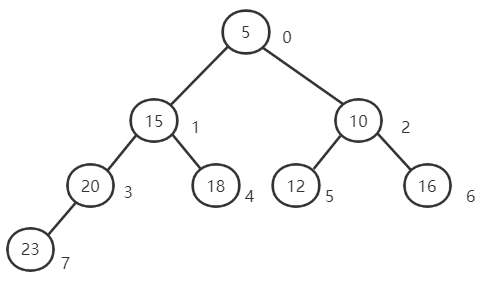 In the maximum and minimum binary heap, element position adjustment may be involved when inserting or removing elements. In the binary heap, the subscripts of its parent node and left and right nodes can be easily calculated by using the subscript index of the element (take the element with index subscript t as an example):

Because the PriorityBlockingQueue is an unbounded queue, the thread does not need to be blocked when adding elements. If the capacity is not enough, it can be expanded

This is a while loop, which performs the floating operation of elements. Each time, it obtains the parent node of the current node and compares it with the inserted element. If the comparison result meets the structure of the maximum and minimum heap, it will exit the loop directly. Otherwise, it will be transposed and continue to compare until the conditions are met

DelayQueue is a blocking queue that supports delay acquisition elements. PriorityQueue is used internally to store elements. At the same time, the elements must implement the Delayed interface. The getDelay() method of the interface can return the delay time. The method parameter is the time tool class TimeUnit

When getting elements, the elements can be extracted from the queue only when the delay time is up.

Characteristics of delay queue: it is not first in first out, but sorted according to the length of delay time. The next task to be executed is at the top of the queue.

Since the queue element must implement the Delayed interface, which inherits from the Comparable interface, the element class also needs to implement the compareTo() method, so there is no need to create an additional Comparator object when creating the queue, and the element itself has the ability of sorting.

An element class is defined below

Let's take a look at the structure of DelayQueue. ReentrantLock is used to ensure thread safety. Elements need to be blocked. PriorityQeue is used for storage at the bottom. This is a priority queue. It is the same as PriorityBlockingQueue above, but it has no blocking function

Let's take a look at the specific put() and take()

The following is the take() method, which is more complex than the put() method

Note: the blocking queue used in the ScheduledThreadPool is not a DelayQueue, but a user-defined DelayedWorkQueue

Generally, the appropriate blocking queue is selected from the following dimensions