- 🏀 Hello, I'm BXuan, a sophomore of software engineering who loves programming and basketball
- 📚 Recently, we are preparing for the blue bridge provincial competition in April. This chapter will talk with you about the hash table! If the text is wrong, please point out and forgive me.
- 🏃 It's not hard to give up, but it must be cool to insist.

Hash technology is used to store records in a continuous storage space, which is called hash table. Understood by mathematical relationship, it is the mapping relationship between X and Y, that is, Y=F(X).

I Defects of hash table

When using hash table, we have two key technical problems to solve:

① How to design and implement hash function

When building hash functions, we need to adhere to two principles:

Hash function is a linear function of Key mapping, such as:

You will find that there are many identical H(K), which is a conflict, because only one number can be placed in a position, and two values correspond to one position here, which is not allowed. 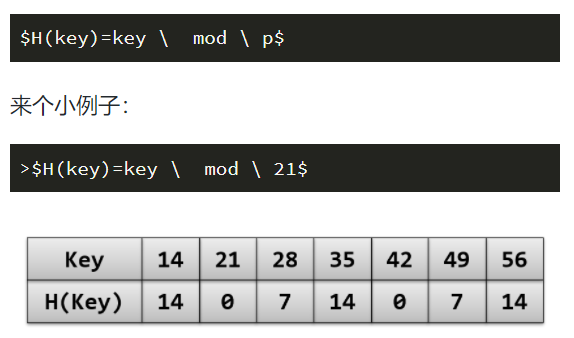 First, consider one bit as the hash function, and it is found that there are many conflicts. When selecting two bits, the combination of hundred bits and ten bits is the most appropriate, evenly distributed and without conflict.

Of course, we are talking about a specific real column of this method. Since it is called digital analysis method, only different analysis of different data can write more suitable H(x).

open hashing is also called zipper method, and separate chaining is called chain address method. In short, it means that once the hash address obtained from the key code conflicts, it will find the next empty hash address and store the record.

How to find the next empty hash address:

When a conflict occurs, the empty hash address is searched successively from the next position of the conflict position.

For the key value key, let H(key)=d and the length of the closed hash table is m, then in case of conflict, the formula for finding the next hash address is:

In the process of dealing with conflicts, non synonyms compete for the same hash address.

The P value is 11, Hash mapping is carried out, and the linear detection method is used to deal with the conflict.

That is, when a conflict occurs, the formula for finding the next hash address is:

Where round is a random number

Note: the hash table obtained by using the open addressing method to deal with conflicts is called a closed hash table. 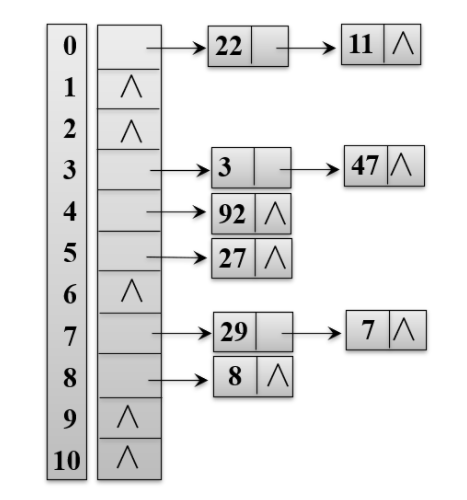 When searching, if it is found in the basic table, it will return success. If it is not found, it will be searched in the overflow area in order. Note that this is no longer a mapping, but a sequential search. It is also placed in order. 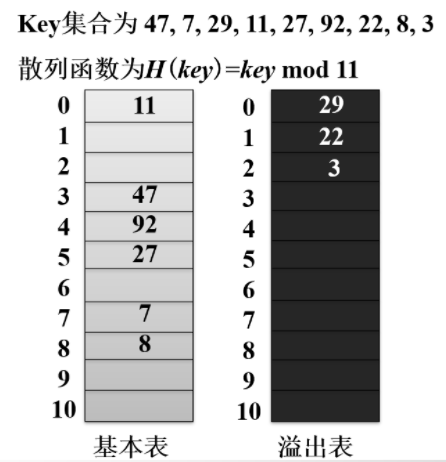 Fri, the little inventor, wants to create a new language. As we all know, it is very difficult to invent a language. First of all, you have to overcome a difficulty, that is, there are a large number of words to deal with. Now fri asks you to help him write a program to judge whether there are two repeated words.

The following code is the answer given by the system, but it cannot pass normally on the blue bridge built-in system (possibly due to the system). There is no problem with the logical structure!

There are many contents of hash table in this chapter, and its implementation method and processing method are also complex. It is necessary to clarify the logic and think slowly in order to master it best. Go, go, go!