Please write a computer program to sum the given string bit by bit:

The input is a string composed of numbers, representing n digits (n < 1000);

The output is a single digit, indicating the result of repeated bit by bit summation.

Little h was terrified of supersonic flight. After careful observation, it is found that the take-off and landing time of the aircraft is local time. Due to the 12 hour time difference between Beijing and the eastern United States, the plane needs a total of 14 hours of flight time.

Read in data from standard input.

The first input line is a positive integer T, indicating the number of input data groups.

The format of takeoff and landing time is as follows

The first format indicates landing at h2:m2:s2 on the day of local time

The third format indicates landing at h4:m4:s4 on the third day of local time.

For each group of data, one line of time hh:mm:ss is output, indicating that the flight time is HHH mm min ss.

Note that when the time is a single digit, the leading zeros should be supplemented. For example, three hours, four minutes and five seconds should be written as 03:04:05.

First, learn the usage of the game getline

The most difficult part of this question is input

The following is the reference code

The spiral polyline as shown in the figure passes through all integral points on the plane exactly once.
For the whole point (X, Y), we define its distance from the origin. dis(X, Y) is the length of the spiral line segment from the origin to (X, Y).

Given the coordinates of the whole point (X, Y), can you calculate dis(X, Y)? 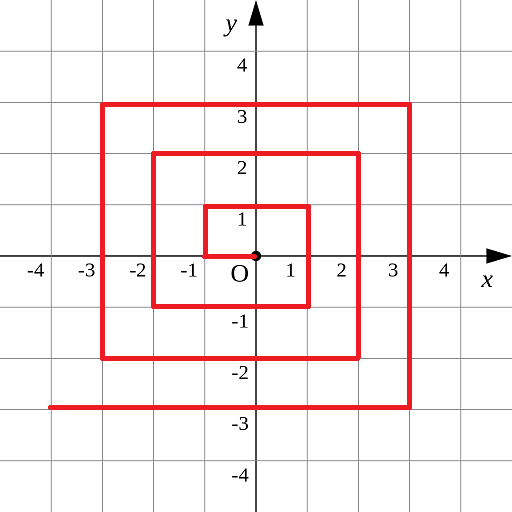 This problem was originally solved by violence, but it failed. It can be seen that the Blue Bridge Cup is no longer a violence cup

The violence code is as follows

This question needs to find rules

This problem can directly simulate about 80% of the data. In fact, it's OK to directly find the law. You can see the figure below. We complete it into a square. The difference between two adjacent squares is 8, forming an equal difference sequence. Then calculate the distance between the required position and the position from the lower left corner each time 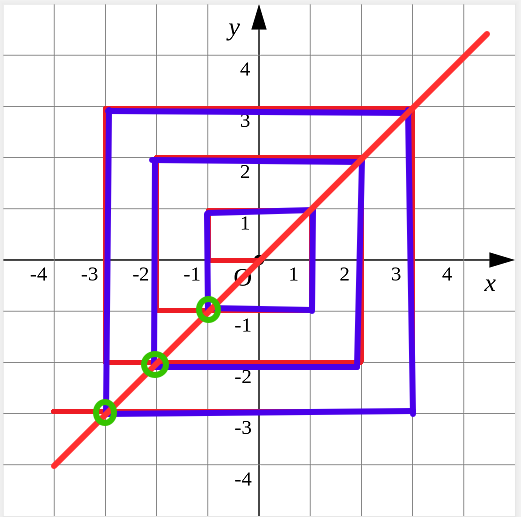 The correct code is as follows

The number of n individuals is 1~n. if they are arranged in a circle clockwise according to the number, start counting clockwise from the person whose number is 1.
(counting starts from 1) when checking in k, the person quits the game circle. The next person starts counting again from 1.
The last person to ask for the number. This is the famous Joseph Ring problem.

This topic is to find the number of the last remaining person when n and k are known.

The input of the title is a line, two spaces separated integer n, k

It is required to output an integer to represent the number of the last remaining person.

This kind of problem is mainly to find rules. You can refer to this article Joseph Ring formula method (recursive formula)

You have a NxN pixel picture of a sea area, "." Indicates the sea and "#" indicates the land, as shown below:

Among them, a piece of land connected in the four directions of "up, down, left and right" forms an island. For example, there are two islands in the above picture.

As global warming causes the sea to rise, scientists

It is predicted that in the coming decades, the range of a pixel on the edge of the island will be submerged by seawater. Specifically, if a land pixel is adjacent to the ocean (there is an ocean in the four adjacent pixels above, below, left and right), it will be submerged.

For example, the sea area in the above figure will look like the following in the future:

Please calculate: according to the prediction of scientists, how many islands in the picture will be completely submerged.

The picture ensures that the pixels in row 1, column 1, row N and column n are oceans.

An integer represents the answer.