See this blog post for details of the computer startup process Computer boot process Briefly, after pressing the power key, cs:ip is set to 0xffff0, which is fixed. The BIOS program is recorded on it. The BIOS performs basic hardware self-test, establishes an interrupt vector table, initializes BIOS interrupts, etc. next, the first sector (512Byte) of the first disk will be loaded to the memory position of 0x7c00, and then the kernel will take over, The implementation of different versions of kernel is also different
/The arch directory is architecture related code. Machines with different architectures have different characteristics and implementation. Therefore, there are different machine directories under the arch directory, as shown in the figure below. Since the startup code is still in real mode at the time of startup, it should be implemented by assembly, which is related to the architecture of the machine

Next, let's look at the directory structure of common x86 architectures 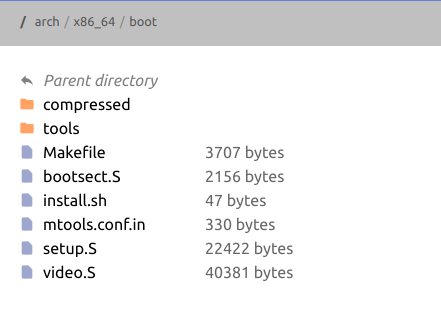 Originally, looking at this directory, I thought it should be BIOS loading bootect and bootect loading setup, but after reading bootect, I found that it was not. This bootect was abandoned!!! I checked and said that it was before version 2.4. After BIOS executes and plays its own code, it will load bootect. S to 0x7c00. During bootect execution, it will move itself to the beginning of 0x90000 of the absolute memory address and continue to execute. Bootect is mainly used as the setup module of the four sectors starting from the second sector of the disk (compiled by setup.S) Load it into the memory immediately after bootect (0x902000), and then load the system module behind the setup module on the disk to the beginning of memory 0x10000
After 2.4, I was studying... The following are the notes of bootect. Don't look, it's useless