1. Syntax error
Found only when python is running

Syntax error: syntax error
There is a problem with the spelling of the code. There are more or less symbols
2. Semantic error

The semantic error prompt is not fixed. It depends on the specific English meaning.
3. Logic error
It's not about code, it's about code design. The code does not report errors, but the result is not what you want. Consider the analysis process and whether there is any problem in the program design.

Mainly at the code level
Put the possible mistakes in a code block: try, try

except can capture multiple,

Under normal conditions, the program is executed normally without exception. 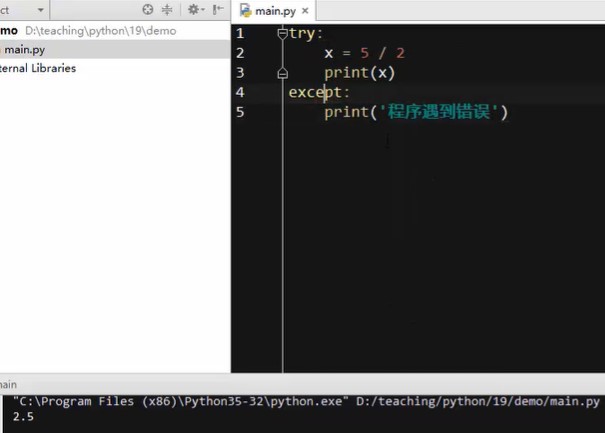 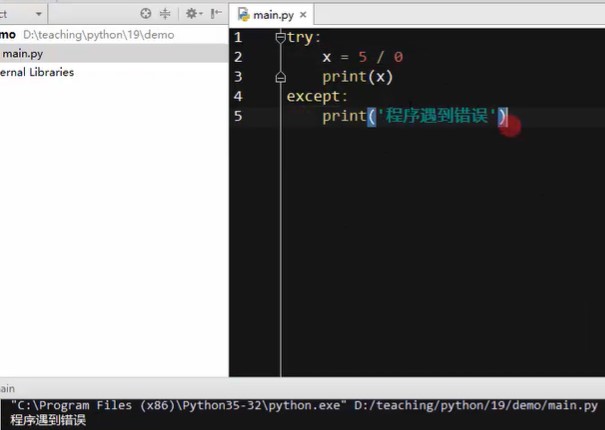 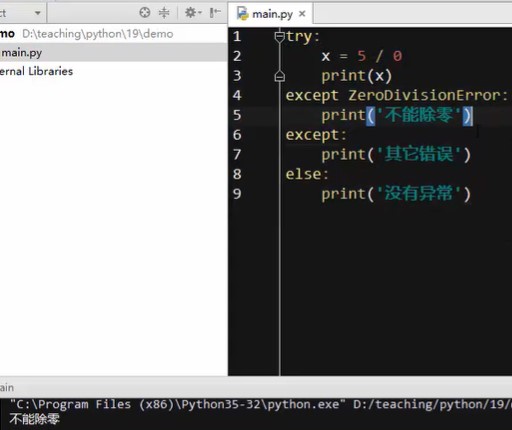 Error display: there are both self written "cannot divide by zero" and self-contained error messages, showing: 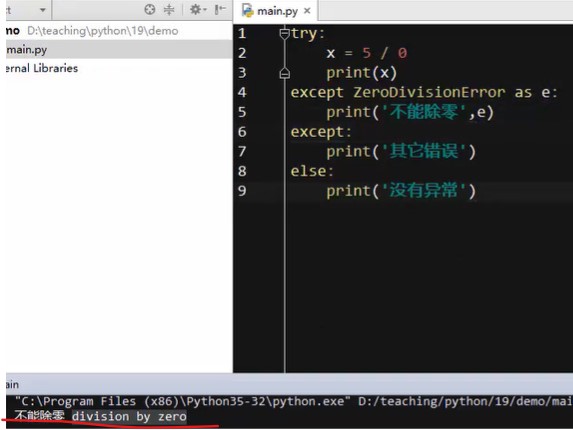 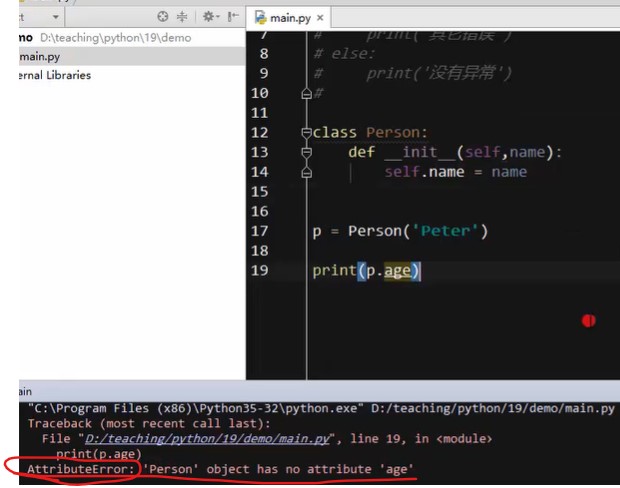 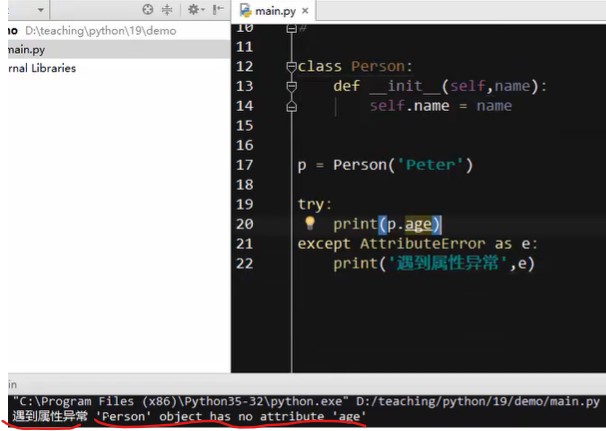 Finally, no matter whether there is an exception or not, the code that we will finally execute is the code, file operation and database operation for the resources that must be released
For example, file operation: to open the file first, read and write the contents. In the process of reading and writing, there is a problem. The file has been opened, and an exception is encountered in the middle. The file is still open, which will affect subsequent operations. In this case, add finally.

Similar to database operation:
When operating the database data, you just need to open the database, retrieve the data, print it on the console, or output it to a file. In the process, the database has been opened, but it has not been closed during the operation. In this case, you need to close it. So, finally install the code to be executed at the end, no matter with no problem.

If there is an exception in the program, it can't go through like this. It must be handled. If it doesn't, it should also be allowed to run the exception and terminate the program. Sometimes exceptions are thrown manually, raise
console: raise AttributeError('attribute error')

The meaning of this thing:
Similar to an interface, this interface must be implemented. You can write it into a method

unittest in python
After writing the code, you can test it before execution

unittest.main(), as shown in the following figure
Test result: the program runs successfully 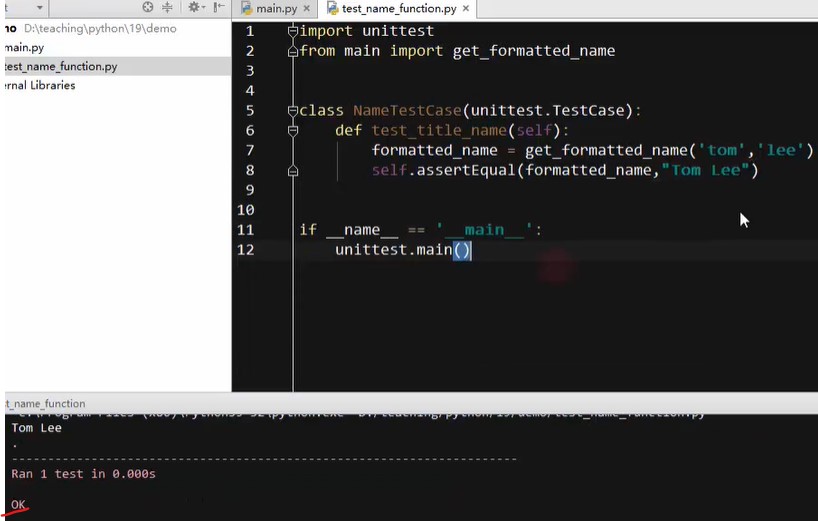 The content of the program has been changed so that the program fails to run. The test results are as follows: 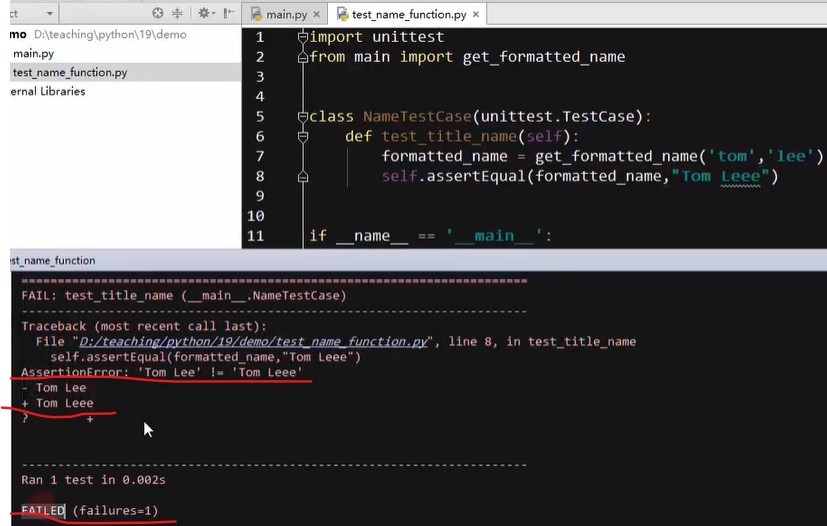 To test this class, write a test case:
This test case should not be put together with the class to be tested, but should be written in a separate script. 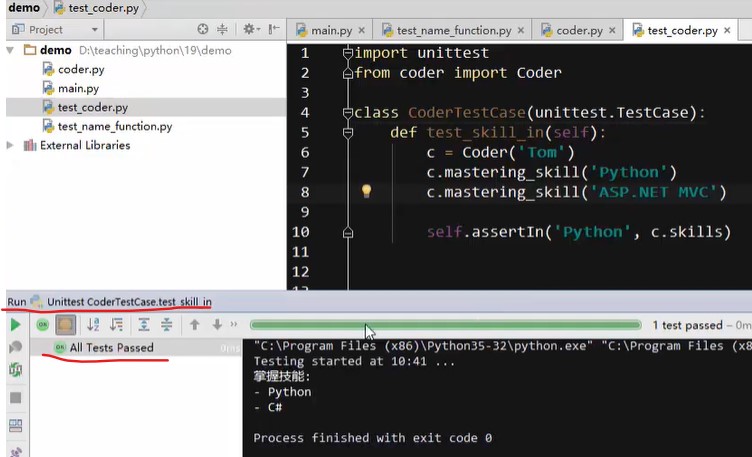 The left side tells which test is running,
Write the assert function assert to the class, and the pycharm operation interface changes to the test result interface:
All Test Passed
Or the test fails: 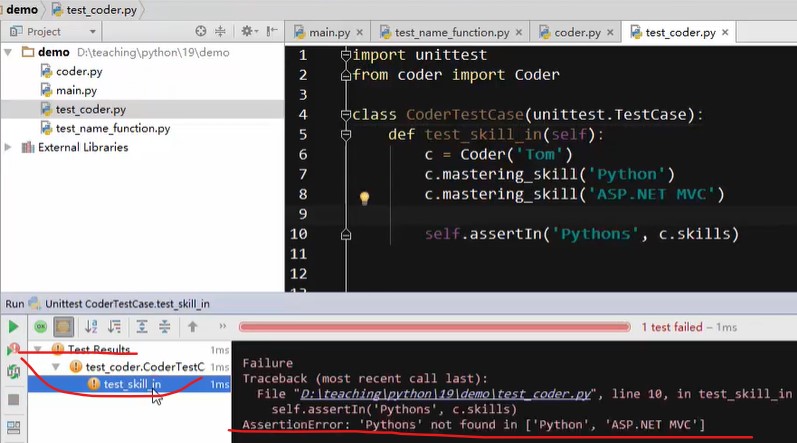 What are the assert functions tested / asserted
Test class, work to be instantiated
If you often test classes, you don't need to write them yourself. Most of them have been written for you. What are the common ones.
1. The test class needs to be instantiated. As we prepared an instantiation function: setup
To test a lot of information about programmers, go to new by yourself every time, so you can def setup(self) - initialize work and create programmer instances

1. After our code or project is completed, we need to test whether its function is complete / correct before we deliver the deployment.
2. After defining a function, we need to perform a series of operations, such as returning a result, calculating a value, and printing a result. Before we integrate the current function or method into the current system, we need to test the current function function, such as whether the value passed by me is the result I want after calculation. Specific conditions are given to determine whether the results meet the expectations.
3. Why write test cases?
It is a way to run the results on the console to see if they meet the expectations.
Unit testing, according to the functions provided by his framework, is more convenient to test. Compared with the testing of the whole program, unit testing simplifies the testing task,
4. Unit test is mainly used in Python,

According to different levels, tests are divided into several categories: 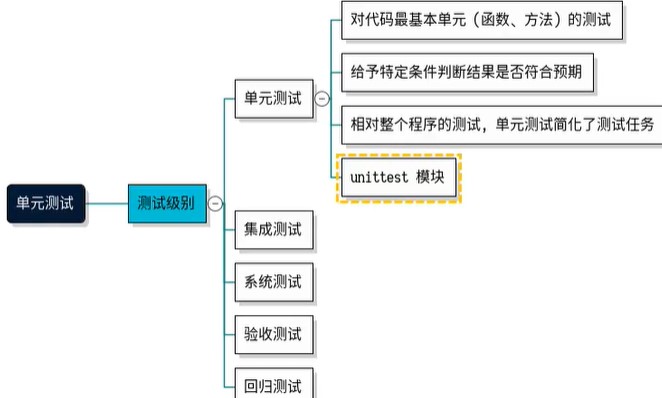 1. Unit test
The smallest unit test is unit test, which tests the most basic unit of code: function / method,
2. Integration test
After developing a functional module, there may be multiple modules that need to be integrated, which will involve integration testing. To integrate it into the system, system testing will be required.
3. System test
4. Acceptance test
Acceptance tests will be required prior to acceptance
5. Regression test
If problems are found in the actual deployment or application process, iterative testing or development may be required, which requires regression testing
6. After defining a function, we need to perform a series of operations, such as returning a result, calculating a value, and printing a result. Before we integrate the current function or method into the current system, we need to test the current function function, such as whether the value passed by me is the result I want after calculation. Specific conditions are given to determine whether the results meet the expectations.

Run this script at an interactive prompt: 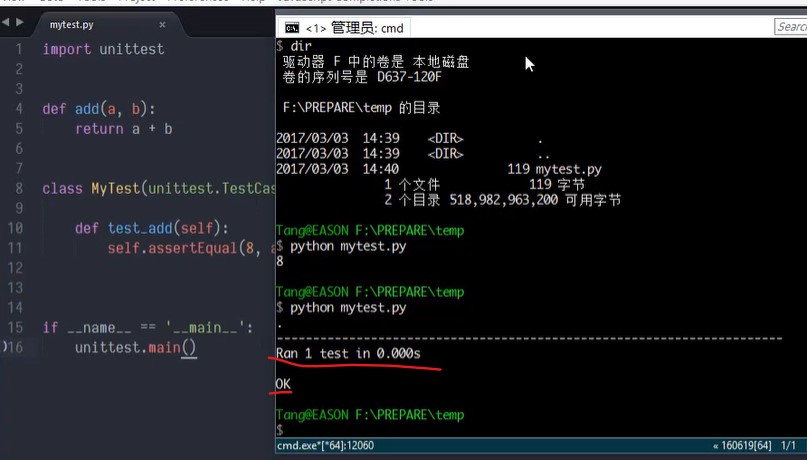 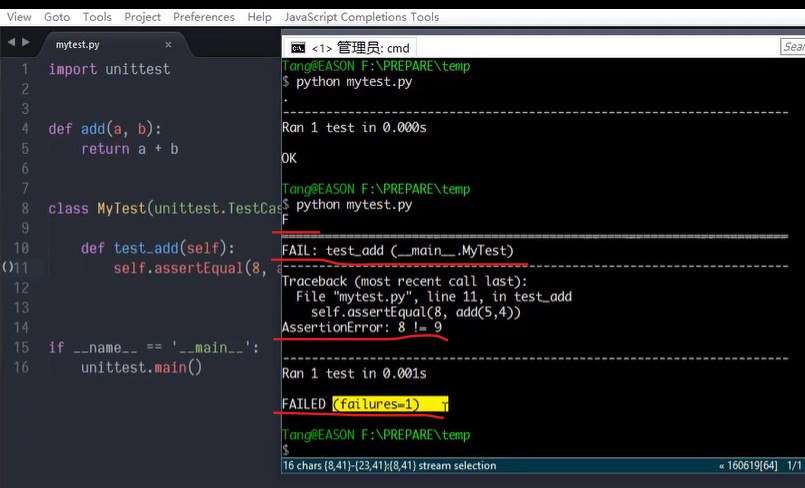 The above example runs in pycharm: 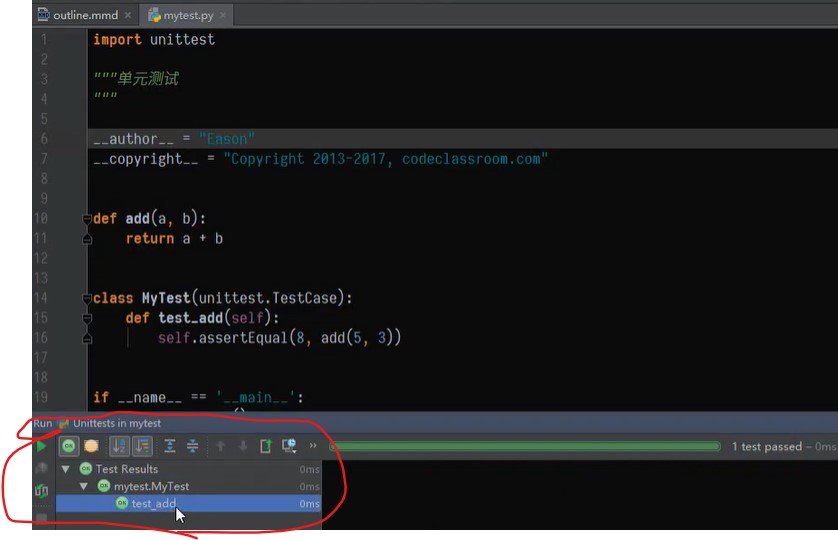 Which test is running is shown on the left,
What is running is the mytest class under the MyTest script, and the test function is test add.
If everything is ok, what you see on the right is green, indicating that everything is normal.
If it's red, it means it can't pass the test.
After understanding this mechanism, you can write multiple test case functions in the test case class.
For example, define other contents:

Test add is wrong, and test subtract is normal.
The organization of the code. The functions defined by ourselves are not written into the class as methods, but are put into the current script as ordinary functions, which can be directly used for testing. In actual development, functions are put into classes as methods.

Judge whether the function test result is correct or not, and use the method of assertion
There are several conventions, which are the requirements of the test device: first of all, you have to write a class by yourself and inherit from unittest.TestCase. Your test method starts with test UU. The main function of the test case is main() under unittest to help us start.
Although unit testing is the most basic unit of our program, mainly testing functions and methods, it is not necessarily necessary to write a ready-made function to help us.

Create a new assert method.py file
This lesson is to demonstrate the assertion method of the test, so prepare several basic data structures in the front. 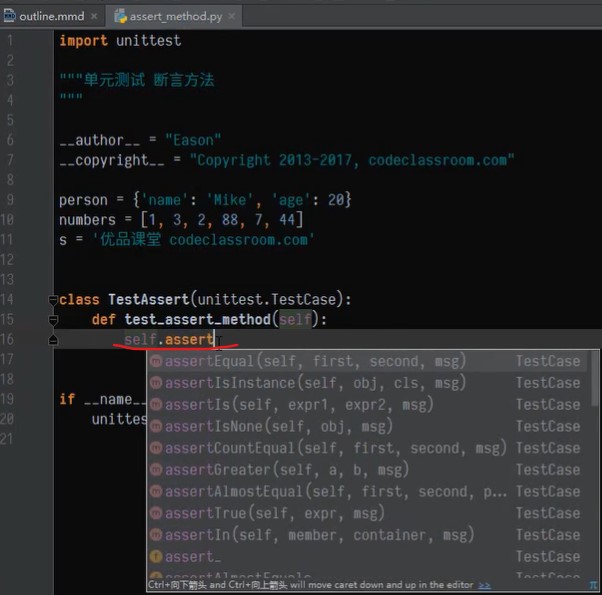 1.assertEqual method to determine whether two values are equal

2.asserttrue
If the defined function is executed, the returned result may be true or false boolean type, then we will use to determine whether the result is equal to true or false. asserttrue
3.assertin
4. Assert almostequal is approximately equal to
self.assertEqual(3.3,1.1+2.2), because the results before and after are floating-point, because of the computer precision, the results are not equal, so the results can not pass. If the business logic allows this kind of error to exist, it can be judged by assert almost equal,
5. Assert is used to determine whether two objects are the same reference
6. Assert is None
7. Assertistinstance judgment type 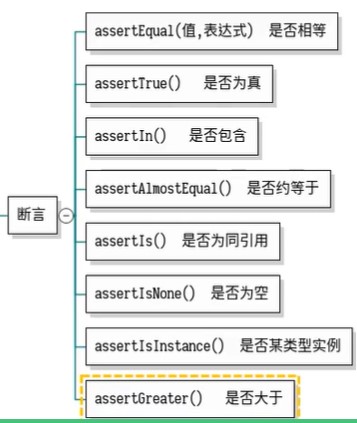 There are many ways to achieve the same function, and you can choose a more familiar method. 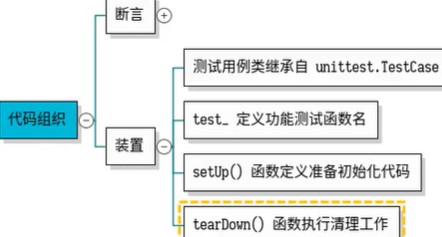 In the actual development, there may be several packages and modules under my project, which contain their own codes. These codes can be directly organized into functions instead of being object-oriented, put under my modules, or written into object-oriented, class based or method based structures.
Now I want to write a class, called calculator. At this time, I don't pay attention to testing. I want to write it with need, I don't pay attention to the content of unit testing, I just write my own business logic,
Define a class

Now the business logic is organized in the form of class plus method. If you want to test, you will usually create a subdirectory under the directory he relies on: test, which contains some test cases.

Question: just now I defined my business logic method into a class and organized it into instance functions. So I have to recreate an instance every time I define a test case function. It's too troublesome. Can I not define it every time and put it in a public place so that every test case function can find it.

In the prepared unittest.TestCase, a special function, * * setup (meaning of setting / preparing for installation) is prepared. The function: once you run the self-defined CalculatorTest test case, some work that needs to be prepared can be written into setup. It is possible that multiple test case methods need to use an instance, which can be written into setup.
The setup function is to do the initialization work. The initialization content is to prepare the following test cases.

The setup also includes: the preparation of some cause and effect context, including the linked database, which may be used for testing in the future,
After the test, the resources inside may need to be cleared. For example, if the database link is opened, the link is dedicated to the test. After the test, the link should be closed. There is a tearDown function: you can clean up.
In the actual development, it is assumed that the file is opened, then the handle of the file is released, the database link is opened, and the link is closed after the test.