Virtual function and its rewriting

1. Covariance
The return value of the overridden virtual function can be different, but the return value must be the pointer or reference type of the parent and child classes.

2. Rewriting of destructor
As we said before, the compiler will automatically process the name of the destructor as destructor. The destructor in the hidden inheritance relationship needs to form a rewriting relationship, for example:

The running result of the above code is 12. By calling the monitoring window, you can see that there is an additional pointer in the aa object, which points to a function pointer array, that is, the virtual function table. This is why the size of aa is 12 bytes.

So, after completing the above analysis, what is the principle of polymorphic implementation?
In fact, polymorphic calls to virtual functions are realized through virtual table pointers.

In fact, the construction of virtual table is realized when the object instantiates and calls the initialization list of constructor. This is a kind of dynamic binding, also known as late binding (late binding).

Let's start with the following code:

In this way, we can see the func3 and func4 functions hidden by the compiler monitoring window. 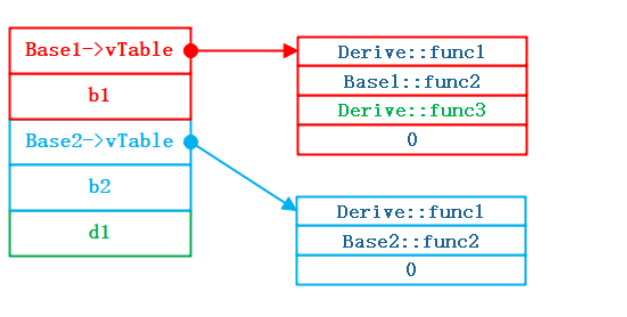