"Sun Quan saw Liu Bei's ambition to rise up and kill him. It would make people all over the world despise him. He wanted to beat him. What could he do? Sun Quan had a sister, sun Shangxiang, who was going to recruit Liu Bei as a son-in-law, and then Sun Quan tried to put Liu Bei under house arrest. Sun Quan's idea was still very simple! He didn't let you Liu Bei go back to Xichuan, and then I Dongwu did whatever I wanted It is not impossible to seize Jingzhou and swallow Xichuan. Soochow's idea is good, but there are more resourceful and invincible Zhuge Liang in the middle. He had predicted that Soochow would do this. Therefore, before Liu Bei went to Soochow to recruit relatives, he specially awarded three brochures to the best man Zhao Yun, saying that it was "to solve difficult problems according to heaven's secrets"

Thinking of this, we have a design idea: the three tricks should realize the same interface; 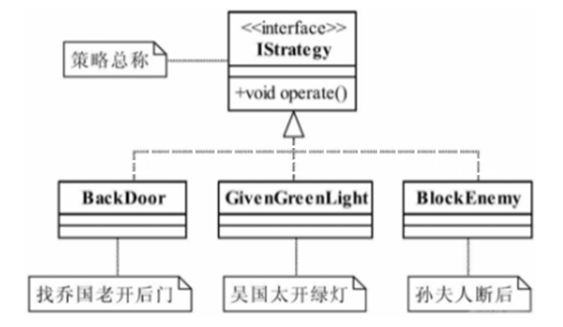 Specific implementation of the coup:

(1) The algorithm can be switched freely

This is defined by the policy pattern itself. As long as the abstract policy is implemented, it becomes a member of the policy family. It is encapsulated by encapsulating roles to ensure that "freely switchable" policies are provided externally.

This is not even an advantage, because it is too obvious. It is too easy to add a strategy to the existing system. As long as the interface is implemented, there is no need to modify anything else. It is similar to a repeatedly removable plug-in, which greatly conforms to the OCP principle.

Each strategy is a class, the possibility of reuse is very small, and the number of classes increases.

The upper module must know what strategies are available before deciding which strategy to use. This is contrary to the Demeter's law. I just want to use a strategy. Why should I understand this strategy? What's the point of your encapsulation class? This is a disadvantage of the original strategy model. Fortunately, we can use other models to correct this defect, such as factory method model, agent model or meta model.