From these two comparisons, we can see that it is not the problem of storage, but that 9 / 2 in the computer is equal to 4. How to save is 4.

Storage of integers in memory:

After we know how to convert binary bits, let's look at the moving rules of the shift operator.

Discard on the left and fill 0 on the right

At this time, the value of a is still 5, which can be compared with b=a+1, and a will not change.

Arithmetic shift right: fill the original sign bit on the left and discard it on the right

Logical shift right: fill 0 on the left and discard it on the right

It is worth mentioning that the complement of - 1 is still - 1 after moving one bit to the right.

Similarly, the bit operator is also in binary bits.

It can be seen from the operation rules that bitwise and bitwise or are similar to logical and, logical or.

No temporary variables are created to realize the exchange of two numbers.

Give a positive integer. What if you want to know that its (if it is a negative number, it is a complement) lowest bit is 0 and 1?

The positive integer is bitwise and 1. If the result is 1, the lowest bit is 1, otherwise it is 0. For example:

From this example, we can see that if a positive number & 1, the result is 1, the lowest bit is 1, otherwise it is 0. If you use the > > shift right operator, you can get the number of each digit. For example:

Assignment operators don't have much to say. Let's take a look at some wonderful things.

How to understand this continuous assignment?

Any variable can be understood in this way. If it is placed on the left of =, it represents a space a = 10;, It's an lvalue. On the right is the representative value p = a;, That is, the right value.

sizeof calculates the size of memory space occupied by variables or types, regardless of what data is stored in memory.

sizeof strlen() the difference between the two

The () after sizeof is the parenthesis of the expression, not the function call operator. Because sizeof is an operator, it can be omitted.

Invert all its binary bits.

++-- just use it in this way. Don't pursue some useless complex use. No one will use it. The purpose of writing code is not to make people understand. For example:

Such code will produce different results on different compilers. There is no need to waste time on this.

==And = are different. If you write it wrong, it becomes an assignment.

Logical operators only focus on true and false, logic and & & are and, logic or | is or.

The previous expression may affect the value of the last expression. For example:

arr+i is the address of the element with subscript i in the array.

[] is an operator. Its two operands are array name and subscript respectively. Neither of them is indispensable. For arr[i] can be understood as * (arr+i), in that case, we can write:

This shows that [] is an operator, and this writing syntax is supported.

Here, both printf and strlen functions must be carried with (), and they must also be carried without passing parameters, otherwise it will be wrong.

For the function call operator (), you can have one or both operands.

Structure is used to describe a complex object.

We can also modify the price later, such as:

Can we change the title or number of the book?

Of course not. We can see that the book name and book number id are created through an array. For them B1 Name is the first address of the array. How can you assign an address.

Since it's an address, we can dereference the address and access the array elements ~, let's try again.

Of course, it is still wrong. It will display garbled code.

Pass the variable address, how to use it?

When an expression is evaluated, it depends partly on the priority and associativity of its operators and partly on the compiler's own rules. The expression we write must make the compiler logic consistent with our own code logic, otherwise it is useless code. At the same time, some operands in expressions may need type promotion.

In the process of operation, some small byte types will be converted to large byte types before operation. The whole process is completed automatically by the compiler at one time.

For example, short and char will be converted to int before operation. This does not mean that type conversion occurs only when different types of data are operated, but to adapt to CPU4 byte arithmetic units, they will be converted to ordinary integers. This process is called integer promotion. As long as there are operations, there will be integer promotion. For example:

For example, first promote the integer a, B and C of character type to ordinary integer, then perform operation, and then put it into d. finally, truncation occurs, only take the last byte and convert it back to character type.

How to improve integer

Integer promotion by sign bit of type. For example:

After we get the binary codes of the two variables, we carry out integer promotion on them, and then truncate the results, because they need to be stored in the character variable c. Because the variable c is to be printed in the form of% d, the truncated complements (all stored in memory are complements) are integer promoted and converted into the original code again.

When calculating sizeof(c), there is no operation, so no integer promotion occurs. Taking positive and negative is also an operator. When sizeof(± C), the expressions (+ C) and (- C) have integer promotion, so they become four bytes.

For short and char, the integer needs to be promoted to int. what about floating point and long integer? For these types, it is not called integer promotion, but arithmetic conversion. 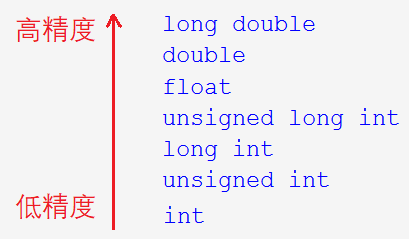 When calculating f, you need to convert a to single precision floating-point type first.

Properties of the operator

There are three factors that affect the evaluation of expressions: 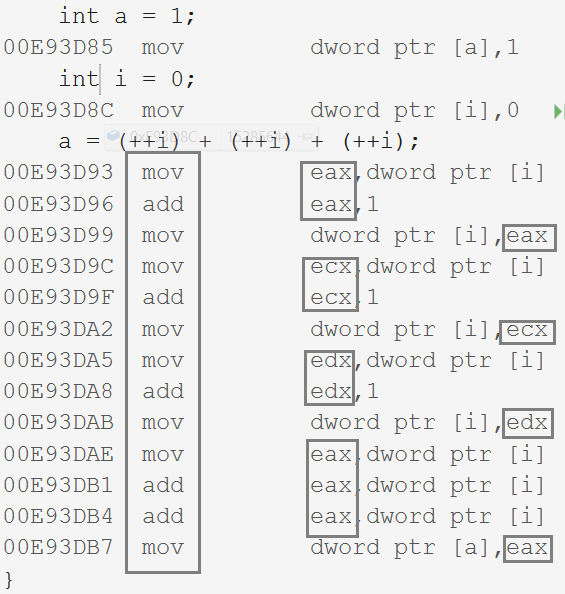 Such expressions will produce different results under different compilers, because the standards of each compiler are different.

For such expressions, we know the priority and associativity of operators, but we still can't determine the unique path of expression calculation, so such code is not good. We'd rather write a few more steps to standardize and determine the unique execution path of the expression, rather than pursue excessive simplicity. This is not the purpose of the code.

If the expression we write cannot determine the unique calculation path through the properties of the operator, there is a problem with this expression.