2. The essence of recursion

In principle, recursion is the behavior of the function call itself.

Recursion point: give the repeated things to the program (think from top to bottom)

4. Advantages and disadvantages of recursion

Advantage: the thinking angle of recursion is quite different from that of ordinary iteration (you can understand it as for loop), so sometimes the problems that can not be solved by iterative thinking can be solved by recursive thinking at once.

Disadvantages: the execution efficiency of recursion is usually much lower than that of iteration, so recursive programs consume more time; Because the recursive function calls the function itself continuously, the program is consistent in consuming stack space before the bottom function starts to return, so the recursive program needs to "eat" more memory space; The end condition setting of recursion is very important, because once it is set incorrectly, it is easy to cause the program to be doomed (crash).

The tower of Hanoi problem means that there are three needles A, B and C on A board. There are 64 discs of different sizes sleeved on needle A, which are arranged in the order of large ones in the bottom and small ones in the top. To move these 64 discs from needle A to needle C, only one disc can be moved at A time, and needle B can be used in the moving process. But at any time, the disc on any needle must keep the big disc at the bottom and the small disc at the top. Input the number of discs to be moved from the keyboard and give the moving process.

The playing method of the above game can be simply divided into three steps:

Therefore, we focus our new ideas on the following two questions:

The solution to these two problems is the same as "how to move the 64 plates on X to Z with the help of Y?" This problem is the same, which can be disassembled into three steps: 1, 2 and 3.

Yes, the disassembly process of Hanoi Tower just meets the definition of recursive algorithm. Therefore, for such a difficult problem, using recursion to solve it will become quite simple!

For the tower of Hanoi problem, when only one disk is moved, the disk is directly moved from needle A to needle C. If the moving disc is n (n > 1), it is divided into several steps: move (n-1) discs from needle A to needle B (with the help of needle C); The last disc on needle A moves to needle C; (n-1) discs on needle B move to needle C (with the aid of needle A). Each time you do it, the number of moving discs is one less, decreasing step by step. Finally, when n is 1, the whole moving process is completed.

Therefore, a recursive function can be designed to solve the Hanoi Tower problem, and the whole moving process of the disk can be realized by recursion. The solving process of the problem is the simulation of the actual operation.

Thought for an hour and wrote the code independently 😗

The hanoi() function defined in this example is a recursive function with four formal parameters "n", "X", "Y" and "Z". "N" is the number of moving discs, "X", "Y" and "Z" respectively represent three needles, whose function is to move n discs on X to Z. When n=1, directly move the disc on X to Z and output "x-z". When n=1, then recursively call hanoi() function, move (n-1) discs from X to y, and output "x-z"; Then recursively call the hanoi() function to move (n-1) disks from y to Z. In the process of recursive function call, "n=n-1", the value of n decreases step by step. Finally, n=1, terminate the recursive call, return layer by layer, and the moving process ends.

The records to be arranged are separated into two independent parts by one-time sorting. If the keywords of one part of the records are smaller than those of the other part, the records of the two parts can be sorted separately to achieve the order of the whole sequence. It mainly adopts the divide and conquer method and the number of excavation and filling. The divide and conquer method is to decompose the big problem into each small problem and solve the small problem, so that the big problem can be solved.

We first have an unordered array, for example

2.1. The first step is to take the benchmark number

Two variables i and j are defined to point to the first element start and the last element end of the unordered array respectively.

2.2. The second step is the partition process

We first define the first element arr[0]=4 as the reference element. At this time, the first position of the array is the pit. Then we need to start from the right to the left of the array to find the elements less than the reference number and exchange positions with the pit.

After changing the position, now convert to find elements larger than the benchmark number from the left to the right of the array: 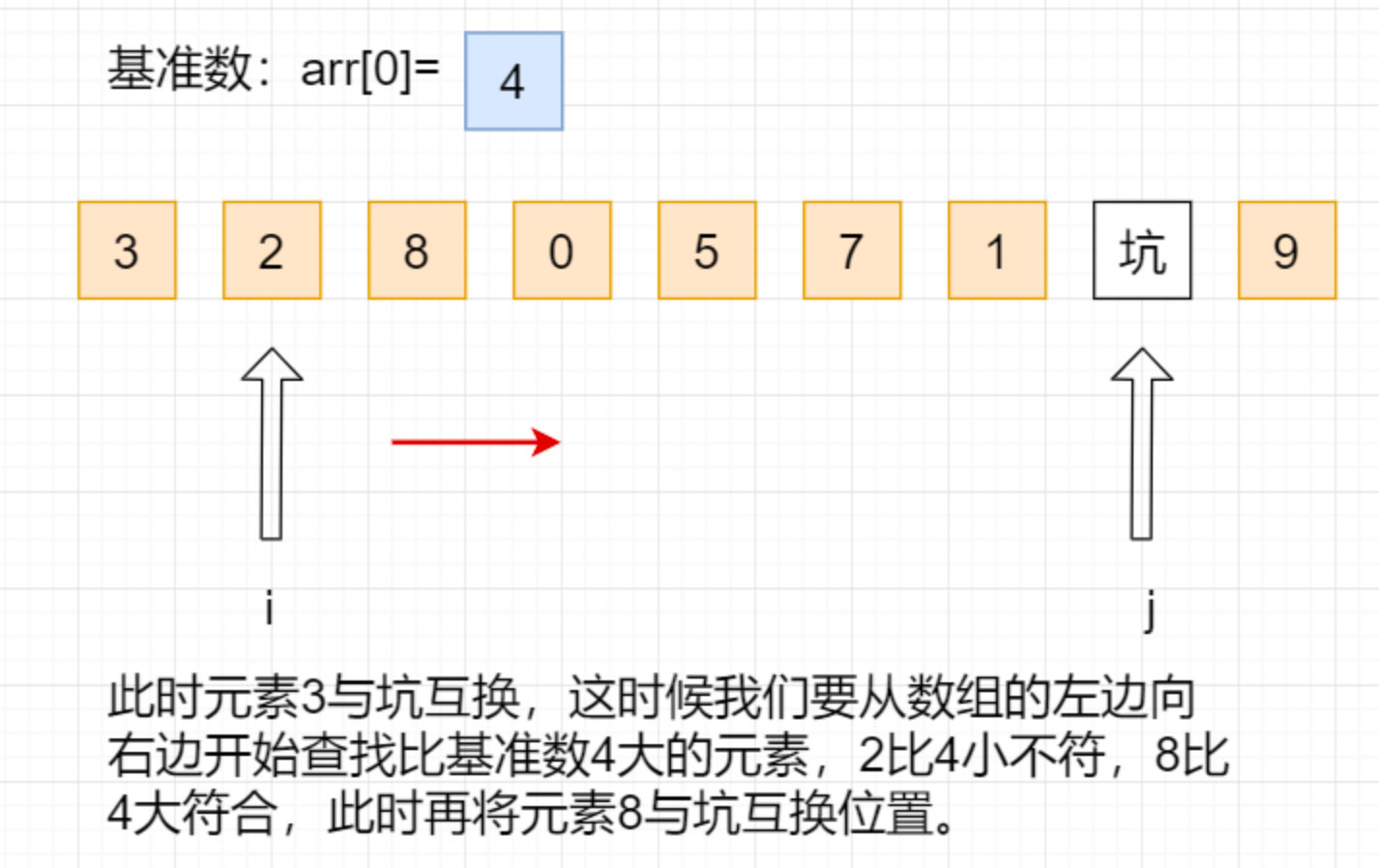 After changing the position, now start searching from the right to the left of the array again. Elements smaller than the benchmark number: 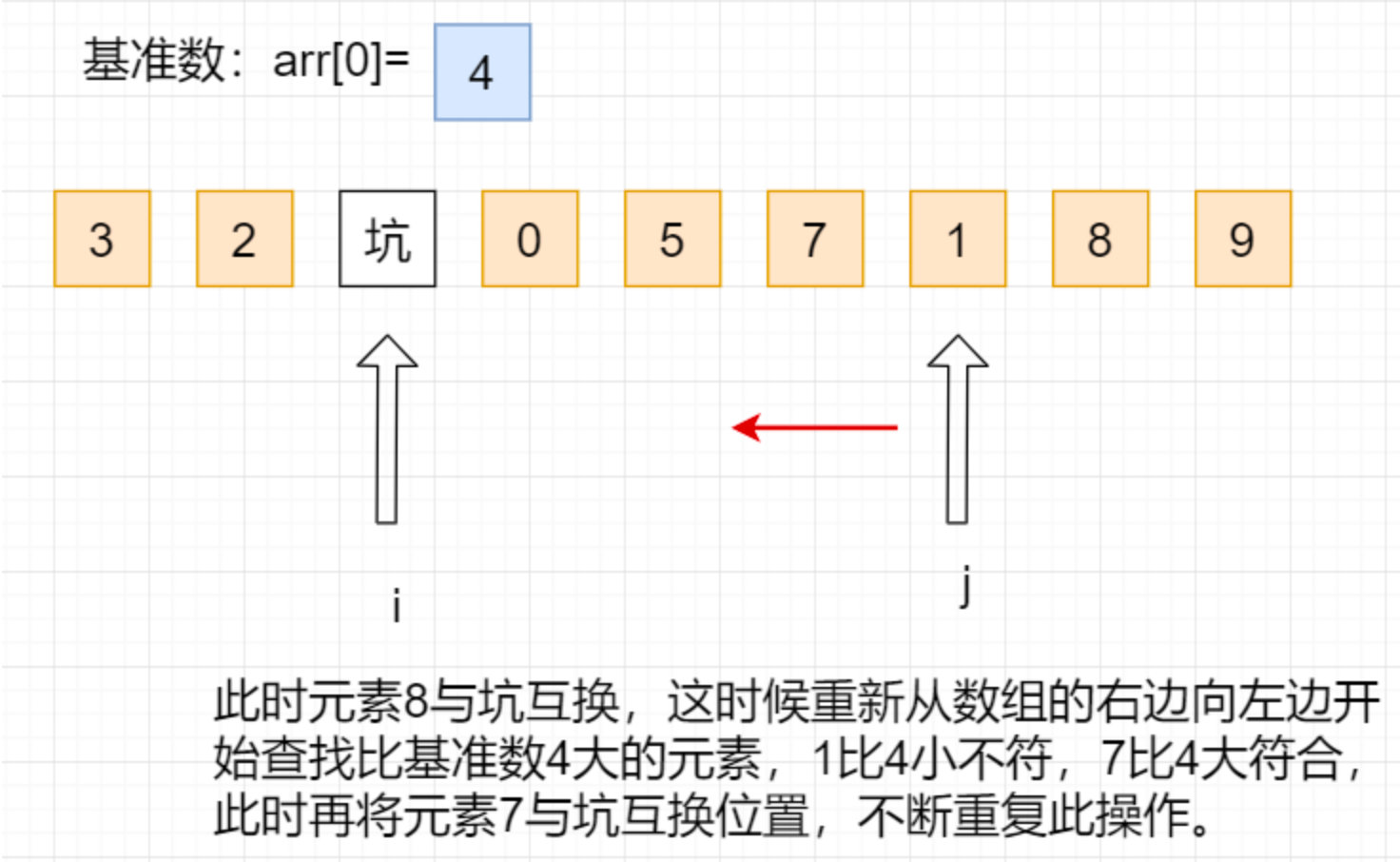 Repeat this operation until it is divided into left and right zones, and then fill the benchmark number into the pit, so that the first sequence is completed. As follows: 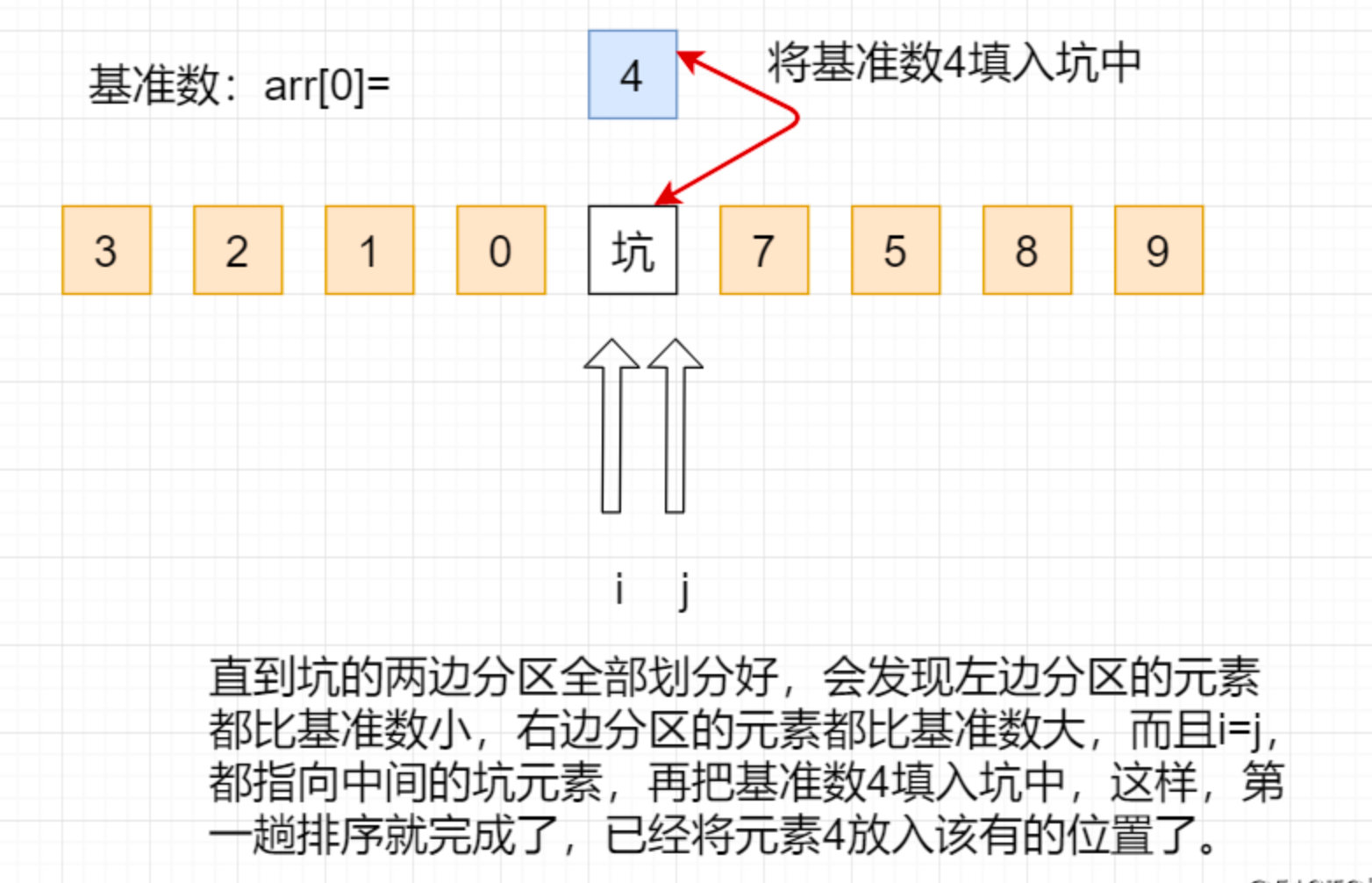 2.3. The third step is to repeat the partition operation for the two sections

Here, we repeat the above partition operation for the two divided intervals until there is only one element in each interval. 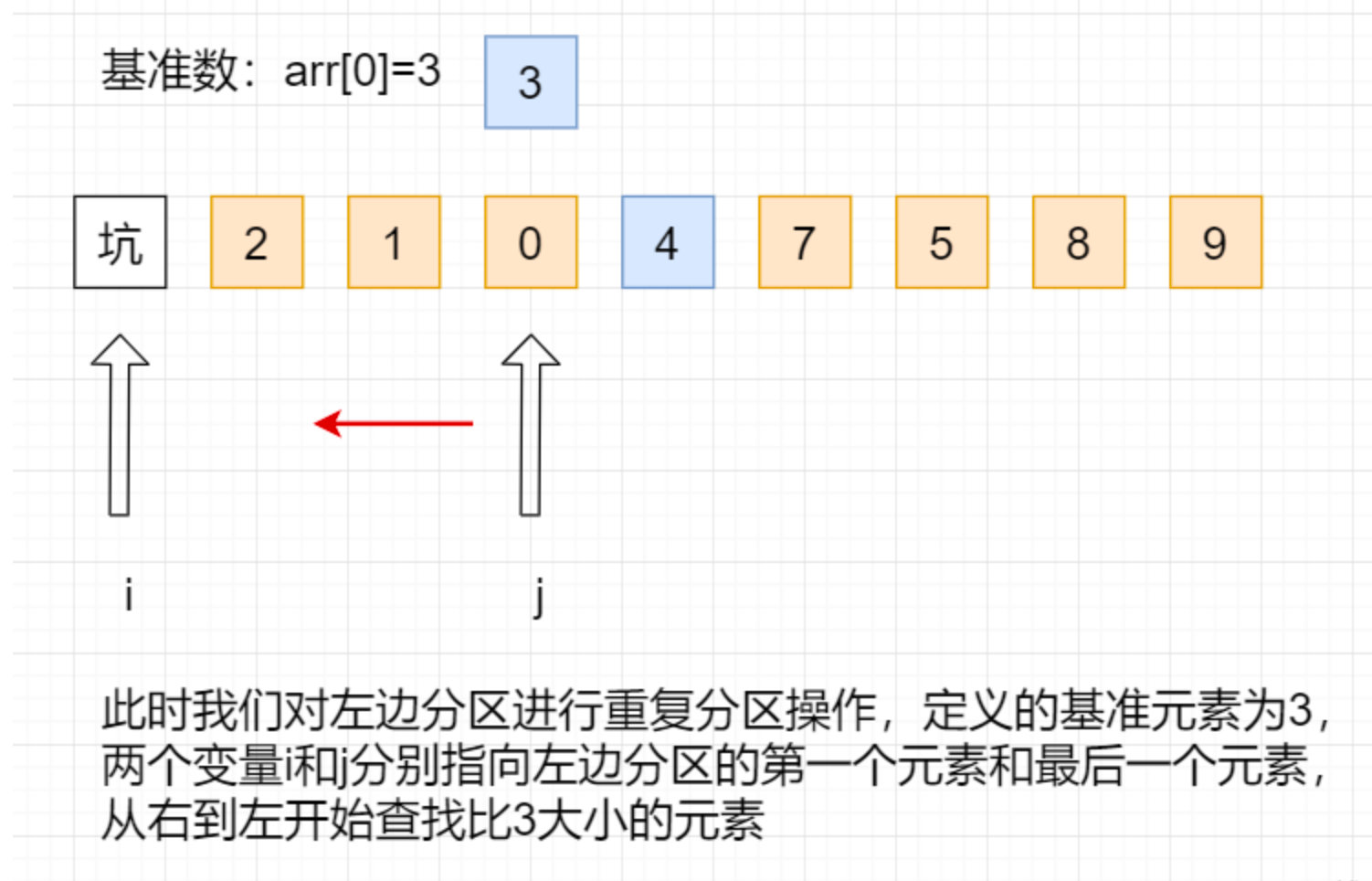 Repeat the above operations until the left and right partitions are arranged in order, and the whole sorting process is completed:

The space complexity is O(1), because no additional set space is used.

Quick sorting is an unstable sorting algorithm. Because we cannot guarantee that equal data will be scanned and stored in order.

calloc
Request and initialize a series of memory spaces

malloc function requests the system to allocate memory space of size bytes and returns a pointer to this space.

The free function frees the memory space pointed to by the ptr parameter.

This memory space must be requested by malloc, calloc, or realloc functions. Otherwise, the function will result in undefined behavior. If the ptr parameter is NULL, no action is taken. Note: this function does not modify the value of ptr parameter, so it still points to the original place (becomes illegal space) after calling.

Memory leaks even if memory space is not released

There are two main causes of memory leakage:

Functions starting with mem are compiled into the string standard library, and the declaration of the function is contained in string H in this header file:

The calloc function dynamically applies for nmemb consecutive memory spaces with a length of size in memory (that is, the total space size applied is nmemb * size), and all these memory spaces are initialized to 0.

Why is there no "recalloc" in the C standard? 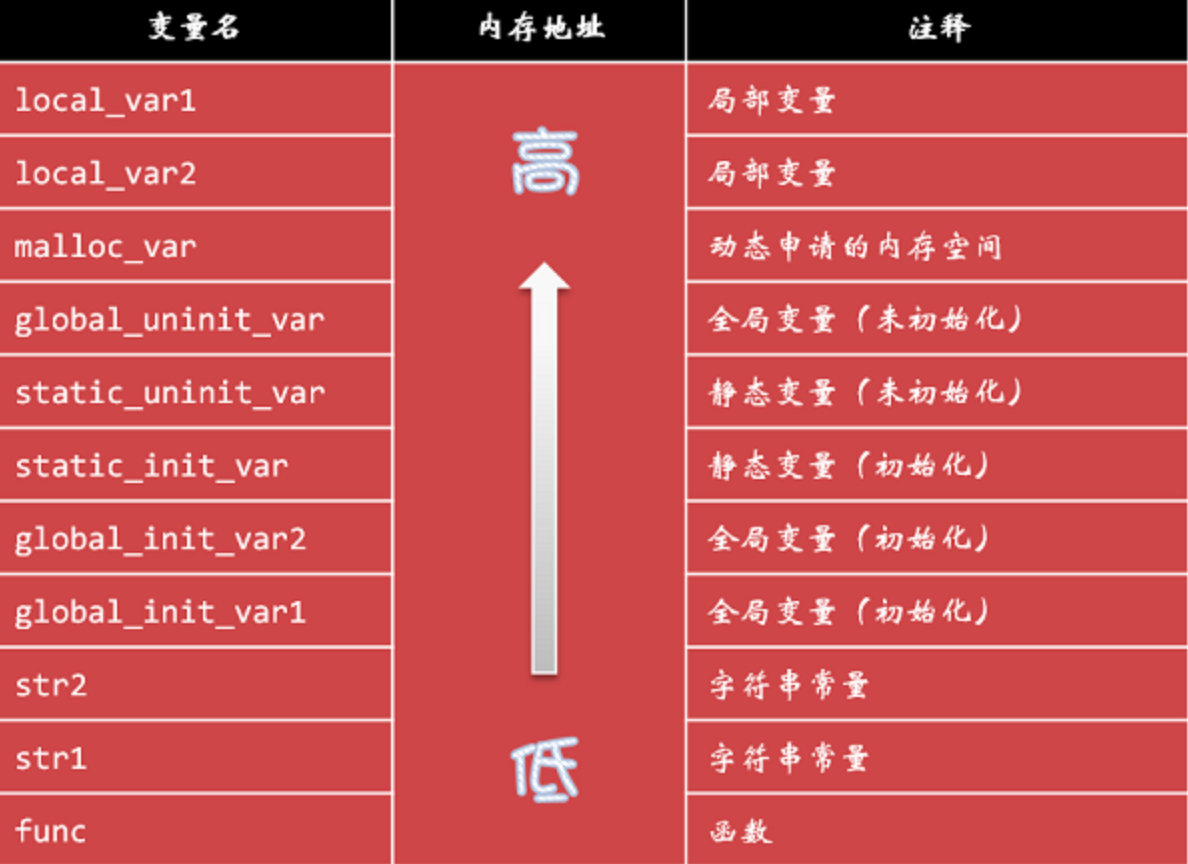 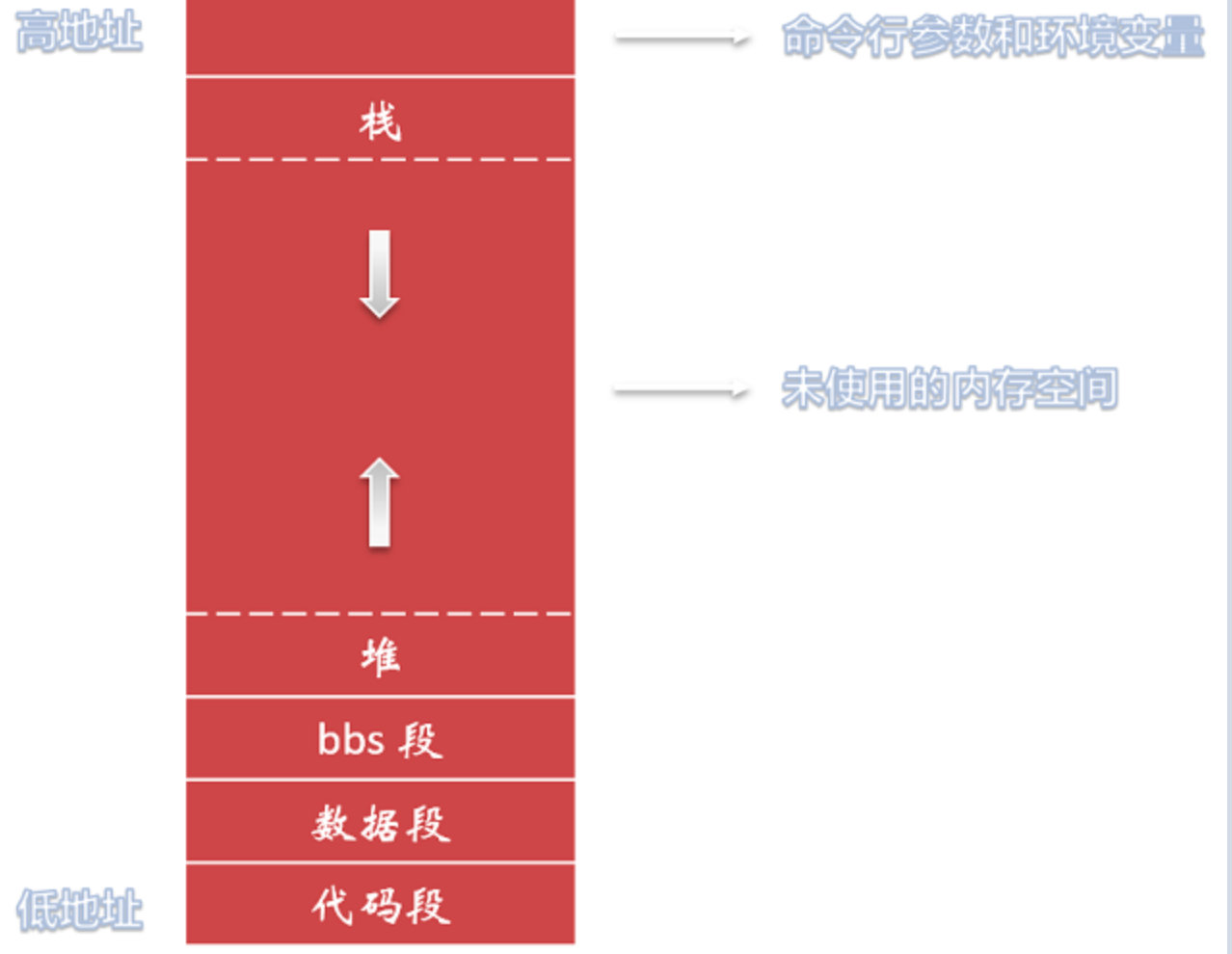 According to the memory address from low to high, it is divided into:

The size of this area has been determined before the program runs, and the memory area is usually read-only.

In the code segment, it is also possible to include some read-only constant variables, such as string constants.

BSS is the abbreviation of English Block Started by Symbol. The data in this section will be automatically initialized to the number 0 before the program runs.

Previously, we learned the dynamic memory management functions. The memory space applied by using them is allocated in this heap.

Therefore, heap is used to store the memory segment dynamically allocated during the operation of the process. Its size is not fixed and can be dynamically expanded or reduced.

When the process calls malloc and other functions to allocate memory, the newly allocated memory is dynamically added to the heap; When using functions such as free to release memory, the released memory is removed from the heap.

You may often hear the word stack, which generally refers to this stack.

Stack is the memory area of function execution, which usually shares the same area with the heap.

8. Comparison of heap and stack

Heap and stack are the most important elements of C language runtime. Let's compare them below.