class and function, but not implemented

Specifically describe the content of the class, including the declaration of member functions

Implement the contents of member functions. Examples are as follows:

The type of some member variables in the class can be written with a label at the time of declaration and determined at the time of concrete instantiation.

Of course, the member function definition can also be completed in the class declaration (I often do this in java). Such functions will become inline candidates. This way of writing is not good. The reason will be explained later.

To truly become an inline function, there are the following restrictions:

Its essence is not to define different positions. The inline function is related to efficiency. Calling a small function may cause some unnecessary stack space consumption. In order to improve efficiency, such a small function will be replaced by an appropriate short code by the compiler during compilation to reduce the loss.

inline is just a suggestion to the compiler, which may not be adopted by the compiler. If it is too complex, it will still be treated as a real function.

Be careful with inline functions and believe in the choice of compiler.

An access modifier is added to the class definition.

Private indicates that the members of this part are private and can only be called by the instance itself or friend functions. Other functions and statements cannot be accessed and modified directly. To access, you need to use the provided public function.

Protected is similar to private. The difference of this protected member is that it is accessible in subclasses. (supplemented by inheritance and derivation)

Constructor is a function under public in the class declaration.

A better way to write is to use the initial column, as follows:

If there is no assignment during construction, the default argument is used.

There can be many constructors, that is, overload.

There is a certain contradiction in the way it is written here. The first constructor has explained that if no parameter is provided, the default argument 0 is used; The second rewrites this sentence again. It is unnecessary and will fail to compile.

It can be written as follows:

The second constructor means that if only one parameter is given, the real and imaginary parts are set to this parameter. (it's really useless)

Can the constructor be placed in the private area? It sounds nonsense, so you can't instantiate the object? Write a class that does not need to be instantiated? In fact, it is possible to do so.

In a design pattern called singleton, a class is designed, which is responsible for creating an object and only one, and provides some functions to access the object. Externally, you can use it directly without instantiation, and share an instance globally. The key to this design pattern is that constructors are private functions. It is generally used in some scenarios where the number of instances is limited to avoid frequent creation and recycling of globally used instances. The code screenshot is as follows: 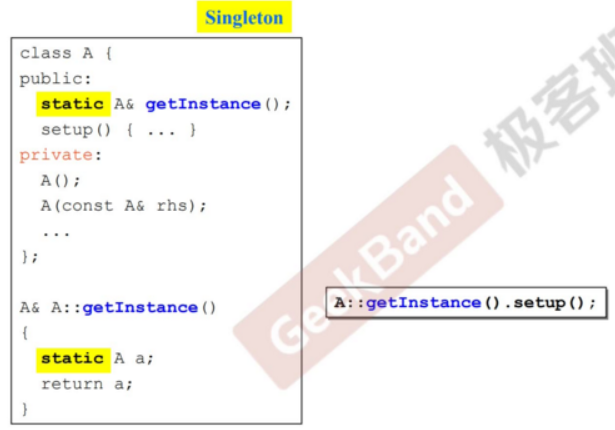 Member functions that provide member values (some around), such functions should be marked const. Calling a function does not and cannot change the contents of the object. Examples are as follows:

On the one hand, this operation is to protect member variables, on the other hand, it also avoids the problems that may occur when a const object obtains member variables.

It's good to pass references. After all, the size of the pointer is fixed, and the size of the object may be large, causing overhead. It is also generally recommended to write as a biographical reference.

Sometimes there is no need to pass references, especially some simple variables and data types.

If you want the passed in parameters not to be changed, use const to decorate them. There are the following situations:

I saw the type name for the first time here & this way of writing. This means that this type of reference is different from passing a pointer, but it can be understood as a pointer. In the sub function, the formal parameter is used as the variable name, and the change will also affect the argument.

In C + +, whether a parameter is a pointer or a reference is different. It is distinguished by * and &, which will not be discussed here.

But sometimes it is also necessary to pass a reference. For example, this reference is passed in the parameter and returned after processing. This is OK.

private and protected member variables cannot be called externally, but can only be called by themselves or friend functions. friend

Meta functions are defined outside the class and have access to the above member variables. The prototype of a friend function has appeared in the class definition, but it is not a member function.

Friend class means that the whole class and members are friends and can be accessed by friend classes.

The friend function does not have this pointer. You need to pass in the used object as a parameter. If it is a static member, a global variable, or a global object, no parameters are required.

In addition, objects of the same class are friends with each other and can call each other's private variables. The code screenshot is as follows: 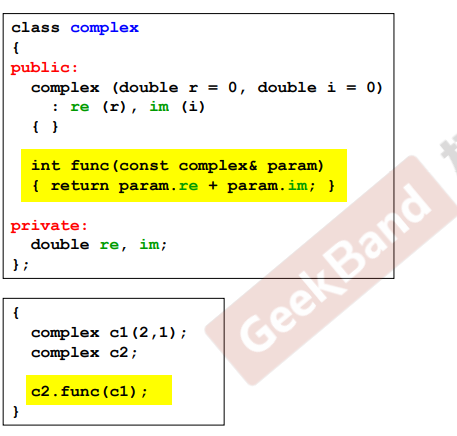 The member function has a hidden parameter, this, which refers to the caller. This is a pointer. Code examples are as follows:

Note that the return value of the operator function is also a reference. If you don't care about the return value, it's OK to set it to void. However, for the following concatenated operators:

For an operator of a class, you can only use one writing method of member or non member, not two. The compiler automatically matches.

Non member functions do not have this pointer, which is actually equivalent to writing global functions.

The same operator can have different effects depending on the number of parameters, as follows:

For < <, only non member functions can be written. The code is as follows:

os cannot be written as const because the output is changing the os.

In order to output in series, the return value should be osteam &, which can continue to accept < <, so it should be of the same type as cout.

The class name typename() is equivalent to creating a temporary object with a build function. The life cycle is very short, just to pass values. It doesn't matter if there is no name.

The quotation is very good

The sender does not need to know that the receiver receives as a reference reference.

For example, the doapl function returns * ths, which is an object, but the declared return value, that is, the receiver, is in the form of reference. There is no problem with this writing. The specific contents are handed over to the compiler.

For another example, when using overloaded operators, c1 is also passed in as an object, but the parameters are written as references, which is no problem.

Without class name. However, when using, the object should be passed in as a parameter, unlike member functions, which can be clicked directly.

Some writing methods to pay attention to