compare some differences between C and C + + definition categories to Stack as an example:

C language defines the stack is nothing more than defining a structure and then defining some functions. Its data and functions are separated. When operating data, you need to call the initialization function after defining the type, and then you need to pass the address of the stack object every time you operate the stack data, otherwise you can't change the original stack data in the function. At the end of our use, we need to call the destroy function manually.

therefore, C + + classes provide the idea of encapsulation, and the data you do not want to call will not be accessed by you.

but in order to realize the basic functions of the stack, I added member functions in the class. These interfaces are open to you. You can call the interface to access me.

but there are still problems to be solved. I often forget to call Init function and destroy function, which is also a hidden danger.

therefore, C + + provides constructors and destructors, which will be called automatically when defining and leaving their own defined cycles.

but calling each member function always needs to pass the address of the object. It's troublesome every time. This leads to the this pointer of the member function.

this explains how the syntax of C + + we explained earlier came from.

considering the problem of deep and shallow copy, users are allowed to provide copy constructor and operator =.

after the C/C + + program runs, the process address space is distributed as follows: 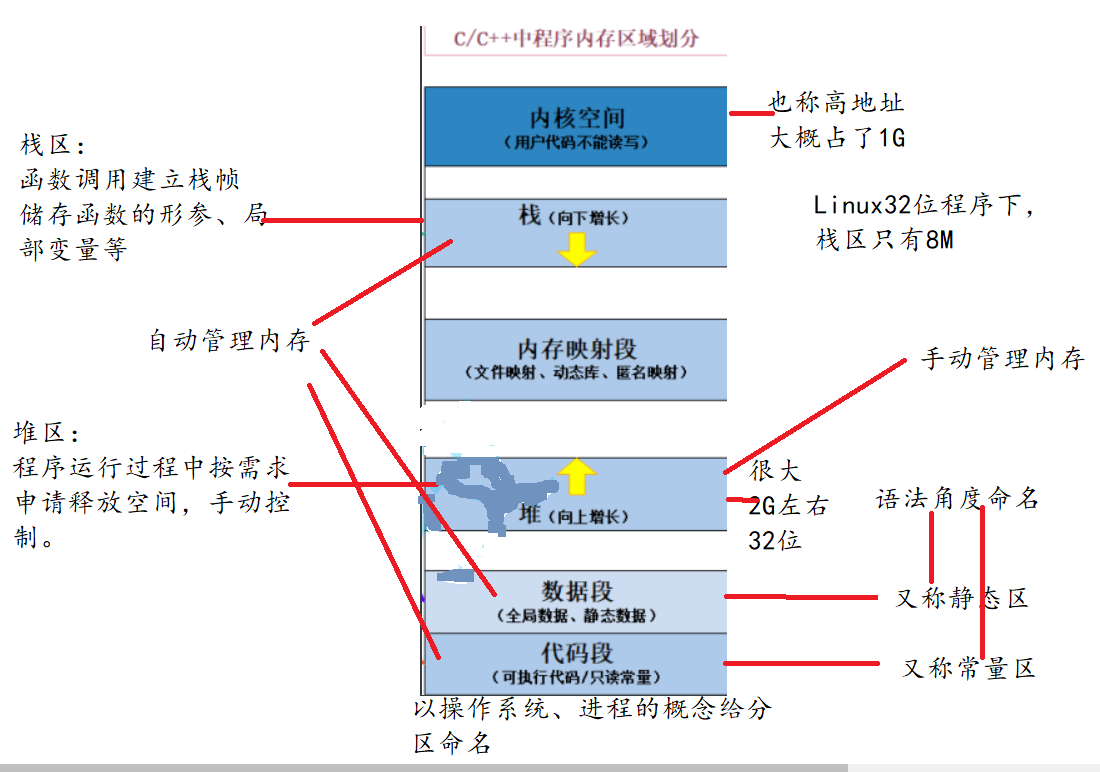 why should C + + provide a new heap memory allocation method?

first of all, the allocation method of C language is not easy to use.

after testing, malloc/free and new/delete have no essential difference on built-in types, but only usage.

for custom types, malloc calloc realloc can dynamically allocate memory, but they only open space and will not call the constructor of this class.

the test is as follows: 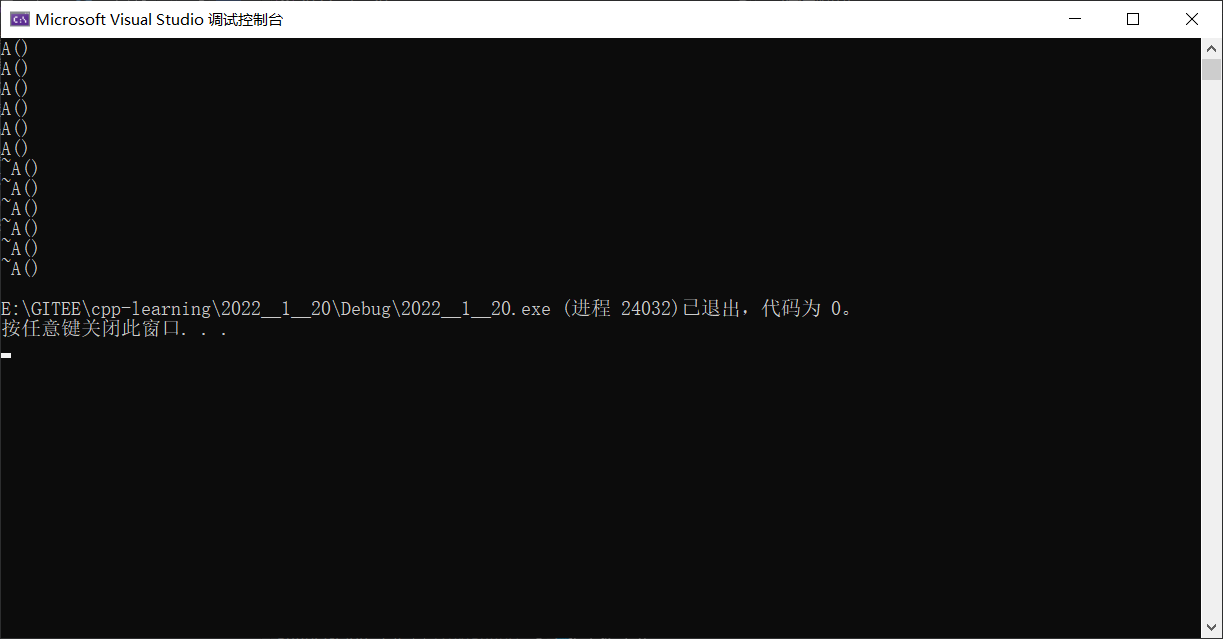 the mismatch between malloc and free,new and delete does not necessarily cause problems. The specific situation depends on the processing of the compiler, but we'd better match it as far as possible. 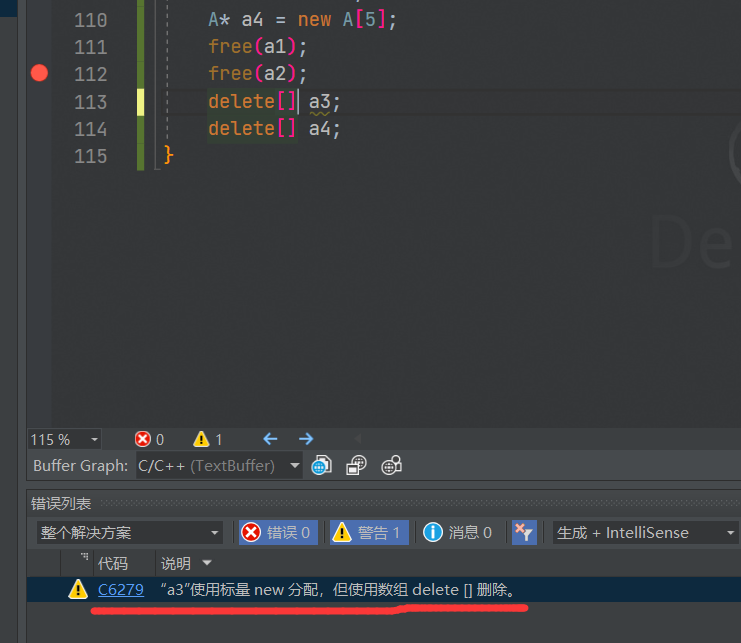 in C language, the application for memory from the heap may fail. For example, after the malloc application fails, a null pointer will be returned, and we can get an error code:

however, C + + does not want to identify the allocation failure by returning nullptr and error code. The following will verify that even if the application fails, it will not return null:

directly report an error instead of returning a null pointer like C, and then enter if to print the error code and handle the error. The error reported here is actually the error that we did not catch the exception. 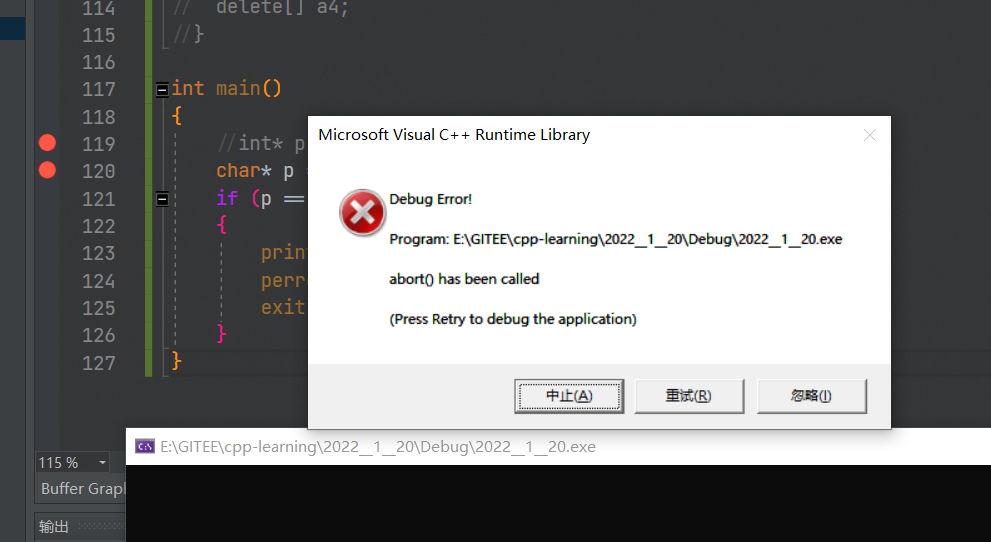 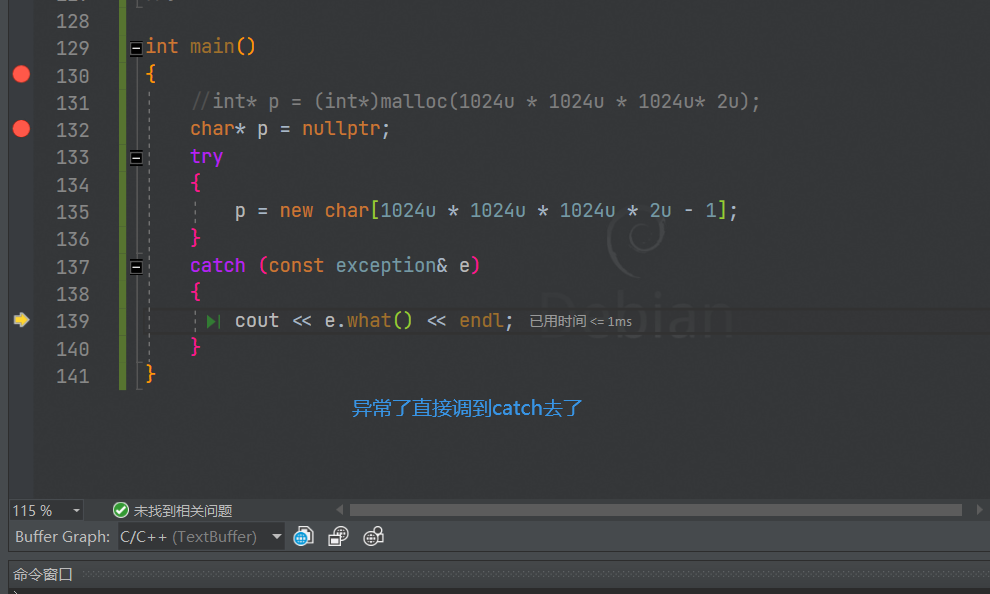 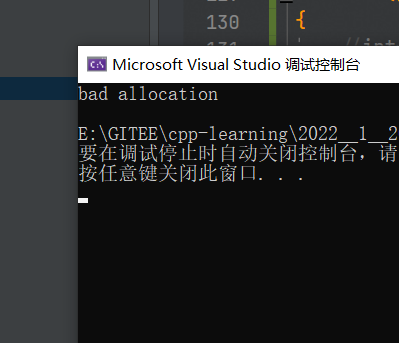 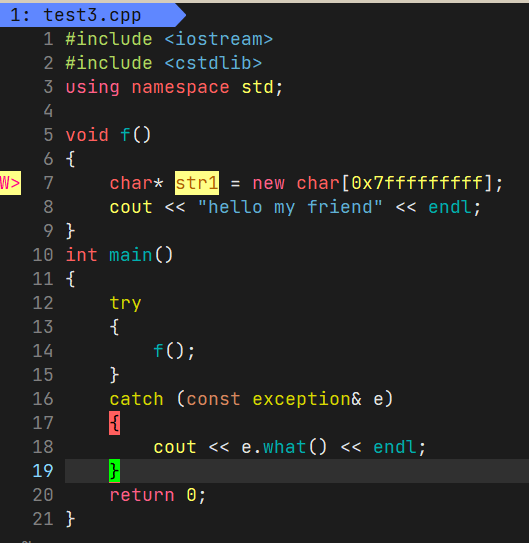 for example, use new and delete to complete the application of a linked list node (i.e. buynewnode function)

for the stack we simulated, there is a dual intention to return resources.

3, The underlying principles of new and delete

hit the breakpoint and go to disassembly to see how new and delete run. It is found that:

it is found that the operator new function is called when new generates instructions. We can also use this function ourselves.

let's take a look at the source code of operator new and find that it is actually the encapsulation of malloc and an exception thrown when an application fails.

naturally, there is also operator delete

operator delete is also the encapsulation of free and error throwing exceptions.

such encapsulation is to make the memory management mode of C + + new/delete more in line with the object-oriented way of handling errors (throwing exceptions).

the source code of new and delete in VS2019 (go to the definition), but I don't understand it.

for built-in types, new and delete are no different from malloc and free, but exceptions will be thrown.

For custom type, new first calls operator new to apply the space of the good object, fails to throw the exception, and then calls the constructor of the object.

Delete first invokes the destructor of the object, then calls operator delete..

for the array of application objects, operator new [] (in fact, this is also the encapsulation of operator new) will be called first to apply for space for these objects. If the application fails, throw an exception, and then call the constructor for each object.

Delete[] first invokes the destructor of each object, then calls operator delete[] to return the space.

3. Overload the class with its operator new and operator delete

for example, the linked list is composed of nodes. If each of these nodes goes to the system for application, these memories are discrete small memories, and the speed of continuous application and return will be very slow. We can design a memory pool. When applying for nodes, we can apply to the memory pool, just like you are ready to draw water in order to use water.

this technology is called pooling technology. It has not only memory pool, but also thread pool and link pool. The reason is similar.

you can see that the operator new here is all the memory pool we overload ourselves: 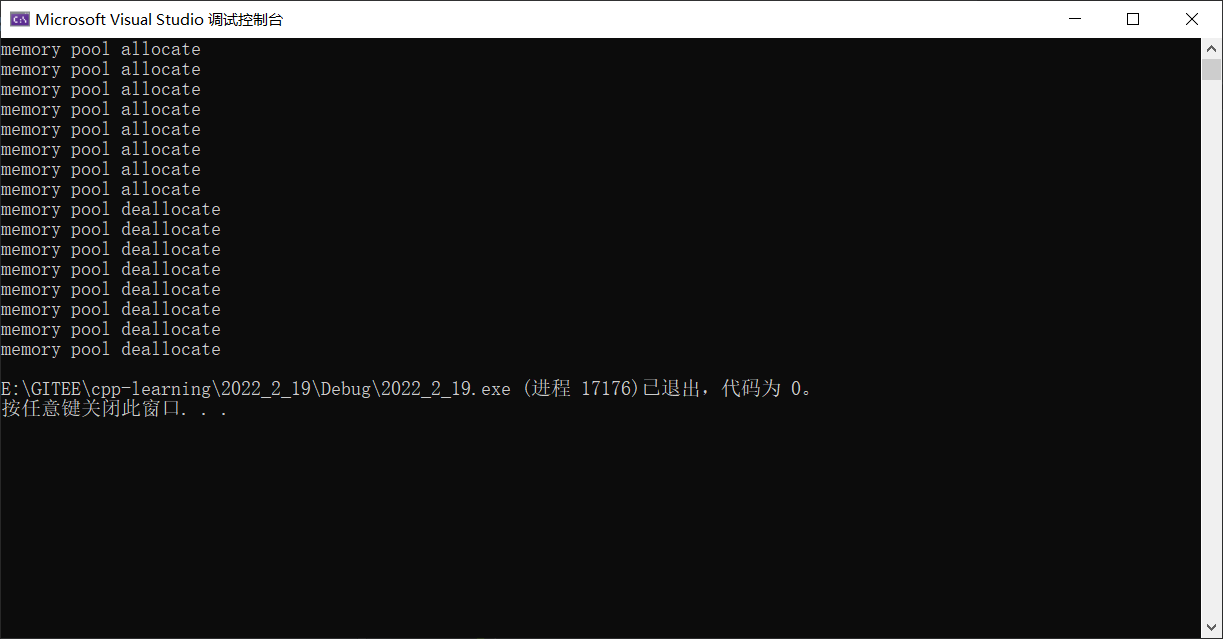 if you apply for memory from the memory pool, because there are many different types of variables that need to apply for memory, you must reinitialize the memory after applying. How to initialize? Just place new. (new (address) class name (constructor parameter)).

how to destruct? Call destructors that can be displayed.

5. Difference between new / delete and malloc/free

differences in usage, whether the constructor destructor is called or not, one group is the operator and the other group is the library function, throwing exceptions and returning null pointers.

after the dynamic memory is applied, it will not be returned to the system after it is not used.

how to prevent memory leakage? First, smart pointers can be used, and then some detection tools can be used.

After   is cut to 64 bits, the process address space will become larger, 2 ^ 64 bytes, which is large enough. 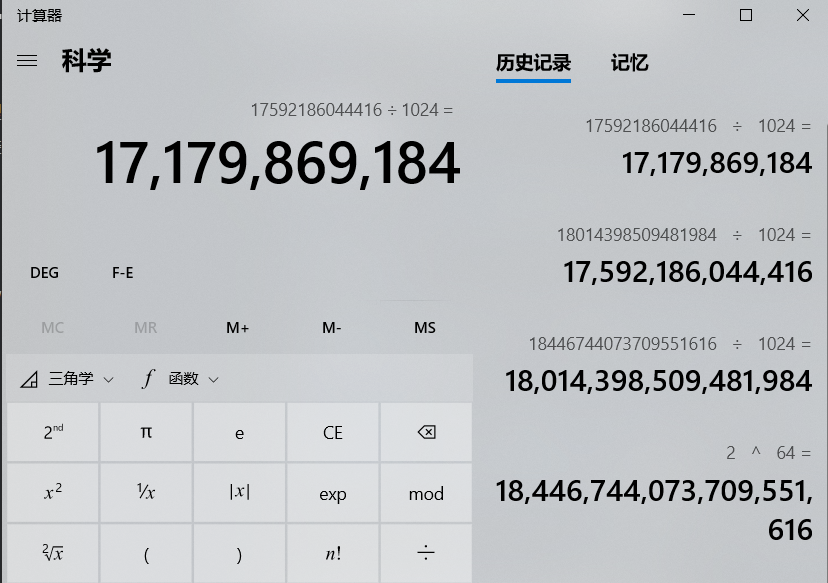