C + + provides a set of functions to generate and use random numbers. A random number is a value obtained by randomly selecting from a set of possible values. All values in this group have the same chance of being selected.

We know that the random number function in C has only one rand(). It is very troublesome to generate random numbers and even random floating-point numbers in a certain interval.

The random library provided in C++11 solves this problem, which allows us to easily generate the required random values.

The following describes how to use the components in the random library to generate qualified random numbers.

The components in the random library are divided into two categories - random number engine class and random number distribution class. 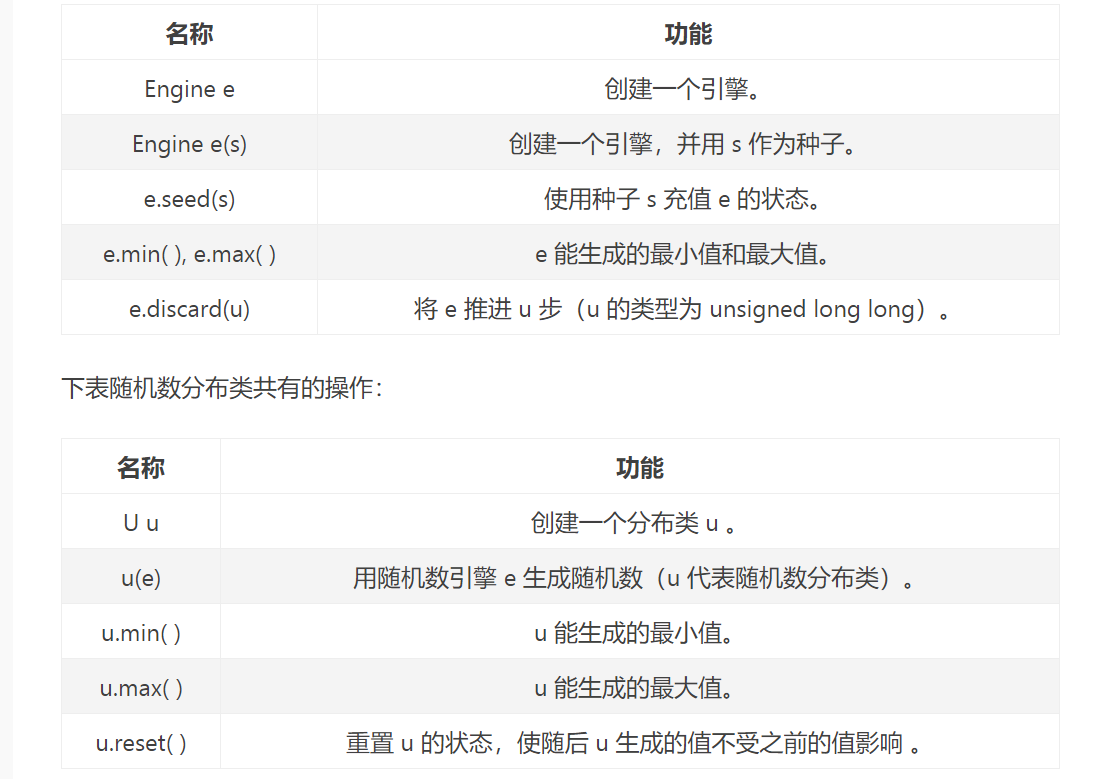 The commonly used random numbers are as follows:

default_random_engine: random non negative number (not recommended to be used alone).
uniform_int_distribution: a random nonnegative number in the specified range.
uniform_real_distribution: the random real number of the specified range.
bernoulli_distribution: Specifies the random Boolean value of the probability.
In fact, the random library is extremely functional, and the random number engine has more than default_random_engine is one, and the distribution class is far more than the above three. It can also carry out advanced random number functions such as Poisson distribution, normal distribution and sampling score. If you want to know more about these contents, please refer to other materials. I may have to wait a long time to fill in these contents.
Detailed reference:

The C + + library has a function called rand (), which returns a non negative integer every time it is called. To use the rand() function, you must include a header file in your program. The following is an example of its usage:

However, the number returned by this function is actually a pseudo-random number. This means that they have the performance and properties of random numbers, but they are not random in fact. They are actually generated by algorithms.

The algorithm requires a starting value, called seed, to generate numbers. If a seed is not given, it will produce the same digital stream each time it runs. The following procedure illustrates this:

To get a different stream of random numbers each time you run the program, you must provide a seed for the random number generator to start. In C + +, this is done by calling the srand function.

Before rand is called, the srand function must be called first, and srand is called only once in the whole program.

It can be seen from the output of the program that each time the program runs with different seeds, different random number streams will be generated. However, if you run the program again using 19 or 171 as a seed, you will get exactly the same number as the first time.

In line 12 of the program, use cin to obtain the value of the random number generator seed from the user's input. In fact, another common way to get seed values is to call the time function, which is part of the C + + standard library.

2.2 limit the range of random numbers

For example, to generate a random number of 1 ~ 6 to represent the number of dice, you can use the following statement: