Clever Response: Deep Understanding of the Responsive Mechanism of Vue 3

Note: This is the notes of the Saint Teacher's course. The original course address is: 07 | Smart Response: Understanding the Response Mechanism of Vue 3

First, what is a response

Looking at the code below, double s depend on count, but when we modify count, it doesn't change.

Double updates automatically when you want to implement count changes. You need something to listen for count in real time, and when you see that count has changed, call double = count * 2 again to update. The following: 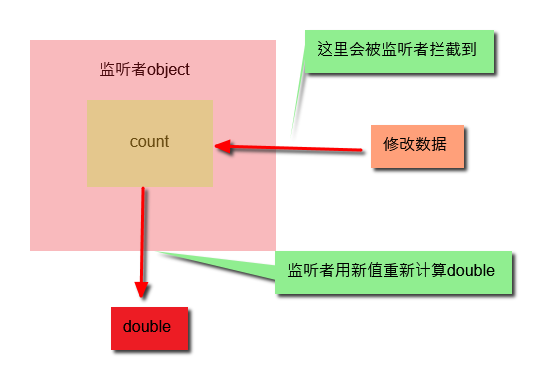 Second, the principle of response

Three responsive solutions have been used in Vue, defineProperty, Proxy, and value setter.

Let's start with the defineProperty API for Vue 2, which gives you detailed API descriptions that give you direct access to the MDN documentation Object.defineProperty() - JavaScript | MDN (mozilla.org) To understand.

In this way, we can achieve a simple and responsive function.

However, the defineProperty API, as the principle of Vue 2's implementation of responsiveness, has some flaws in its syntax. For example, in the following code, if we delete the obj.count attribute (obj.count is deleted from heap space), the set function will not execute, and the double is still the previous value (double or global variable). That's why in Vue 2, we need a special function called $delete to delete data.

Proxy, like Math and Date, is a built-in object for js.

Let's look at the code below, in which we proxyed obj with new Proxy, and then read, modify, and delete objects with get, set, and deleteProperty functions to achieve responsive functionality.

We can see from this that Proxy implements functions similar to Vue 2's defineProperty, both of which trigger the set function when the user modifies the data, thereby enabling automatic updating of double s. Proxy also improves several DefneProperty flaws, such as the ability to listen for attribute deletions.

Proxy listens for objects, not for specific attributes, so it can proxy not only those attributes that do not exist at the time of definition, but also richer data structures, such as Map, Set, and so on, and we can also proxy delete operations through deleteProperty.

Of course, to help understand Proxy, we can also write code about double s in the set and deleteProperty functions. For example, in the code below, the Vue 3 reactive function can turn an object into responsive data, and the reactive is based on Proxy. We can also print data through the watchEffect after the obj.count modification.

A comparison table of the three implementation principles is as follows:

In the project, we use the following code to turn ref into useStorage, which is also the greatest advantage of the Composition API, i.e., the ability to freely split up separate functions.

We can encapsulate the data used in daily development, whether it is browser's local storage or network data, into responsive data and use the mode of responsive data development in a unified way. This way, when we develop a project, we just need to modify the corresponding data.

Our own encapsulated useStorage is simply a response object to update data and synchronize the local Storage. Similarly, we can encapsulate more user-like functions like the useStorage function to encapsulate any data or browser properties you use in actual development as responsive data, which can greatly improve our development efficiency.

There is already a similar collection of tools in the Vue community, VueUse, that encapsulates common properties in development as responsive functions.