[clock out algorithm] 12. Analysis of integer to Roman numeral algorithm

Usually, the small Roman numerals are to the right of the large ones. But there are also special cases. For example, 4 is not written as IIII, but IV. The number 1 is on the left of the number 5, and the number represented is equal to the value 4 obtained by subtracting the decimal 1 from the large number 5. Similarly, the number 9 is represented as IX. This special rule applies only to the following six cases:

Roman numerals are composed of 7 symbols, and each symbol corresponds to a specific value. According to the subtraction rules, 6 additional composite symbols are given, a total of 13 unique symbols, as shown in the following figure: 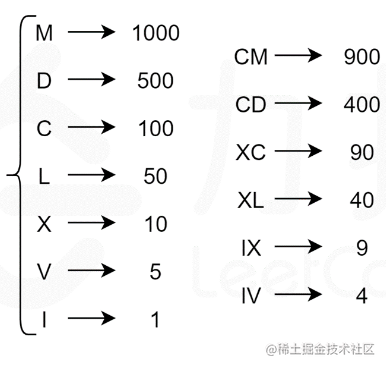 The amount of calculation is independent of the size of the input number.

The amount of calculation is independent of the size of the input number.

This problem uses two solutions to solve it. Of course, there are more solutions. We should think more.

Greedy rule of greedy algorithm: try to use the maximum number each time. Similar to the principle of converting integers to Roman numerals to larger numbers, fewer characters are more convenient for communication and use. This should also be the original intention of people designing Roman numerals.