This article mainly describes how to use CMake to compile our program under Linux.

I. installation of CMake

This article uses Ubuntu 18 04. To install cmake, use the following command:,
sudo apt install cmake
After installation, enter cmake -version under the terminal to view the cmake version,

So cmake is installed.

Then in main C write cmakelists in the same directory Txt, as follows,

Then in main C write cmakelists in the same directory Txt, as follows,

The first line means that the minimum version requirement of cmake is 2.8, and we installed 3.10.2; The second line represents the project information, that is, the project name is demo; The third line is more critical, indicating that the name of the elf file to be generated is main, and the source file used is main c
Switch to main under the terminal C, and then enter the following command to run cmake,
cmake .
The following information will be output, 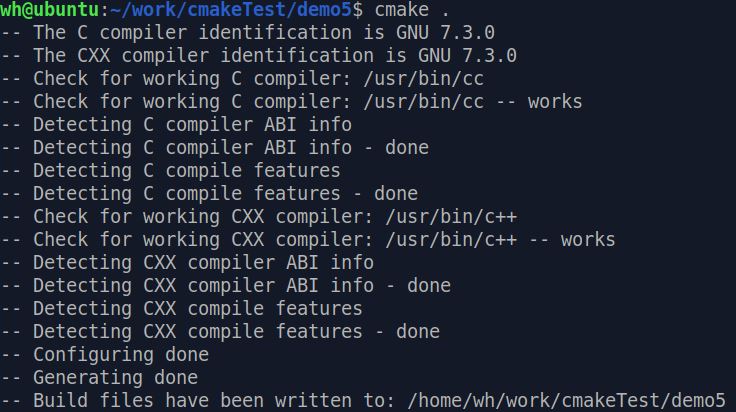 Let's look at the files in the directory,

You can see that the Makefile is successfully generated, and there are some files automatically generated by cmake runtime.
Then enter make under the terminal and press enter,

You can see that the Makefile generated by executing cmake can display the progress with color. Look at the files in the directory,

You can see that the elf file main we need has also been successfully generated, and then run main,

PS: if you want to regenerate main, enter make clean to delete the elf file main.

Multiple files in the same directory

Let's move on to a slightly more complicated example: there are multiple source files in the same directory.
Add two files in the previous directory, testfunc C and testfunc h. After adding, the overall file structure is as follows:,

testFunc.c the contents are as follows:,

testFunc.h the contents are as follows:,

Modify cmakelists Txt, in add_ In the parameter of executable, put testfunc C add in

We are in main Add two more files in the directory where C is located, testfunc1 C and testfunc1 h. After adding, the overall file structure is as follows:, 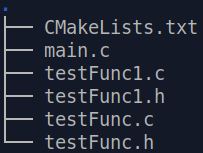 Using aux_source_directory stores the source file save list in the current directory into the variable SRC_LIST, and then add_ Calling Src in executable_ List (pay attention to the writing method when calling variables).
Execute cmake and make again and run main,

You can see that the operation is successful.

aux_source_directory() also has disadvantages. It will add all source files in the specified directory and may add some files we don't need. At this time, we can use the set command to create a new variable to store the required source files, as shown below,

Generally speaking, when there are many program files, we will carry out classified management and put the code in different directories according to the functions, which is convenient to find. So how to write cmakelists What about TXT?
Let's sort out the previous source files (create two directories test_func and test_func1). After sorting, the overall file structure is as follows, 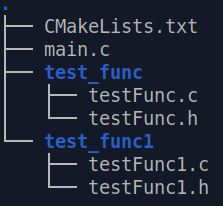 Where cmakelists Txt and main C under the same directory, the content is modified as follows,

Here comes a new command: include_directories. This command is used to add the search paths of multiple specified header files to the project, and the paths are separated by spaces.
Because main Testfunc is included in C H and testfunc1 h. If there is no header, the file cannot be compiled. Of course, it can also be in main C uses include to specify the path, as follows

It's just that this way of writing is not good-looking.
In addition, we used aux twice_ source_ Directory. Because the source files are distributed in two directories, they are added twice. 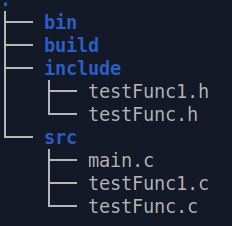 A new command set appears here, which is used to define variables, EXECUTABLE_OUT_PATH and PROJECT_SOURCE_DIR is the predefined variable of CMake, and its meaning is as follows:,

Therefore, set here means to set the location where elf files are stored to the bin directory under the project root directory. (cmake has many predefined variables, which can be searched online for details)

Add the above two cmakelists Txt, the overall file structure is as follows, 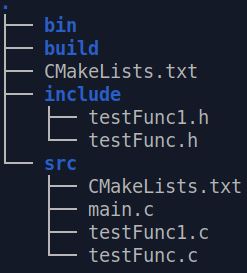 Run ok, then switch to the bin directory, find that main has been generated, and run the test,

Another way of writing:
The previous project uses two cmakelists Txt, the outermost cmakelists Txt is used to control the whole situation, and add is used_ Subdirectory to control cmakelists in other directories Txt operation.

At the same time, cmakelists in the src directory Txt delete.

Sometimes you just need to compile dynamic and static libraries and wait for other programs to use them. Let's see how to use cmake in this case. First, reorganize the file as follows, leaving only testfunc H and testfunc c， 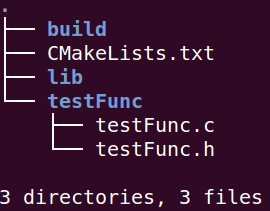 We will run cmake in the build directory and store the generated library files in the lib directory.
CMakeLists.txt as follows,

cd to the lib directory and find that the dynamic library and static library have been successfully generated, 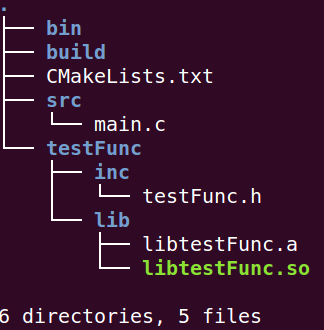 main.c the contents are as follows:,

Cmakelists under the project directory Txt as follows,

Use find_ The advantage of library is to execute cmake It will find out whether the library exists, so that errors can be found in advance without waiting for the link.

cd to the build directory, and then run cmake&& Make. Finally, go to the bin directory to check. It is found that main has been generated and run,

ps: to view which libraries are used in elf files, you can use readelf - D/ XX to view

The previous tutorial in this section used the library search method link_ However, many readers reported that there was a problem with the runtime. I checked the official documents and found that it is not recommended to use it. I recommend using find_library or find_package

Sometimes, if you want to add some compilation options when compiling the program, such as - Wall, - std=c++11, you can use add_compile_options.
Here is a simple program for demonstration, main CPP is as follows

The overall directory structure is as follows:,

Then cd to the build directory and execute cmake&& With the make command, you can get the elf file of main in the bin directory

Sometimes you want to compile only some specified source code when compiling code. You can use the option command of cmake. There are two main situations:

Suppose that our current project will generate two bin files, main1 and main2. Now the overall structure is as follows, 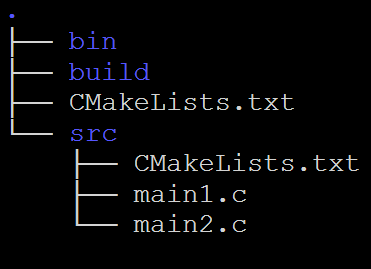 Then write cmakelists. Exe in the src directory Txt, as follows

Note that if else is used here to decide whether to compile main2 according to the option c
Including 1 C and 2 C is as follows:,

Every time you want to change MYDEBUG, you need to modify cmakelists Txt, a little troublesome. In fact, it can be operated through the command line of cmake. For example, we want to set MYDEBUG to OFF, first cd to the build directory, and then enter cmake- Dmydebug = on, so you can compile main1 and main2 (in the bin directory)

Suppose we have a main c. The contents are as follows:,

You can control the printing information by defining macros. We cmakelists Txt as follows,

Here, keep the name of option and main The names of macros in C are the same, which is more intuitive. You can also choose different names. Through and add_ With the cooperation of definitions (), you can control the printout of a single bin file.

The parameter after - D is the flow direction of the control program.

The overall engineering structure is as follows:, 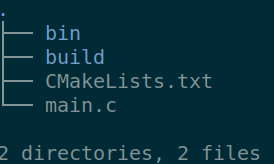 cd to the build directory and execute cmake&& Make, and then execute in the bin directory/ main, you can see that the print is empty,
Then execute the following instructions respectively, and then check the printing effect,

Therefore, if the option changes, either delete the cache file generated during the last execution of cmake, or explicitly specify the value of all options.

The above is a little learning record of learning CMake by yourself. Through simple examples, you can get started with CMake. While learning, you also read many netizens' blogs. CMake has many knowledge points, and the specific details can be searched online. In short, CMake allows us not to write complex makefiles, and is cross platform. It is a very powerful tool worth learning.

If there is something wrong, I hope I can leave a message for correction. Thank you for reading.