If each running thread only runs in isolation, it will have little effect. If multiple threads can cooperate with each other to complete the work, it will bring greater value

Java supports multiple threads to access an object or its member variables at the same time. Using volatile keyword can ensure the visibility of the modified variable, which means that any modification of the variable by any thread can be immediately perceived by other threads

Synchronize keyword can modify a method or synchronization block. It mainly ensures that multiple threads can only have one thread in the method or synchronization block at the same time. It ensures the visibility and exclusivity of thread access to variables. The essence of the implementation of synchronize keyword is to obtain the monitor of an object, and this acquisition process is exclusive, that is, only one thread can obtain the monitor of the object protected by synchronize at the same time

One thread modifies the value of an object, and the other thread senses the change and then performs corresponding operations. The former is a producer and the latter is a consumer. This communication mode realizes decoupling and is more scalable. In Java, in order to achieve similar functions, we can let the consumer thread continuously loop to check whether the variables meet the expectations, and exit the loop if the conditions are met, so as to complete the work of the consumer

The purpose of sleeping for a period of time is to prevent too fast and ineffective attempts. This implementation method seems to meet the needs, but there are two problems:

In the following example, two threads, WaitThread and NotifyThread, are created. The former checks whether the flag value is false. If it meets the requirements, follow-up operations are carried out. Otherwise, wait on the lock. The latter notifies the lock after sleeping for a period of time

The operation results are as follows

The order of the third and fourth lines of the above results may be interchanged. The execution process of the code is briefly described below

From the content of the previous section, we can extract the classic paradigm of waiting notification mechanism, which is divided into two parts, for the waiting party (consumer) and the Notifying Party (producer)

The pseudo code is as follows:

The pseudo code is as follows:

If A thread A executes thread Join() statement, which means that the current thread A waits for the thread to terminate before starting from thread Join() returns

In the following example, create 10 threads numbered 0 ~ 9. Each thread calls the join() method of the previous thread, that is, thread 0 ends, thread 1 can return from the join() method, and thread 0 needs to wait for the end of the main thread

The output is as follows 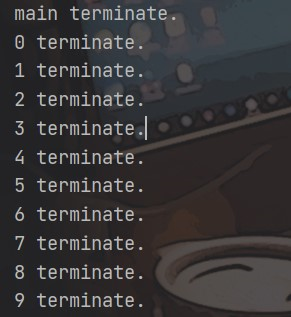 Thread. The source code of join () is simplified as follows