(from the original author) Source , reprint please keep the information)

OpenGL As a graphics rendering engine, and using freeglut Create window, handle keyboard, mouse input, etc. It covers everything from the configuration of the OpenGL environment to the creation of a simple 3D scene with lights. Compared with the previous professional courses such as web basic training and introduction to computational thinking, the course of computer graphics has a higher entry threshold, which requires some knowledge of space analytic geometry and linear algebra in advanced mathematics; for the same course without graphic programming or image processing foundation, there are many new concepts that need to be understood and mastered; the program code is large, which requires one The ability of coding; in addition to all kinds of comments about demonizing the course heard by students from the elders and sisters; therefore, I have a course for this course, which is equipped with relevant codes and Visual studio engineering; at the same time, it is also the work of the director of the Information Department of the College Association for science and technology. At the same time, because only for the course, there will be a lot of related computer graphics content missing, interested students can learn more by themselves.

If you want to reprint this tutorial, please keep the source.

What is computer graphics

In short, the main research content of computer graphics is to study the principles and algorithms of how to represent graphics in computer, and how to use computer to calculate, process and display graphics. A graph is usually composed of geometric elements such as points, lines, faces, and bodies, and non geometric attributes such as grayscale, color, linetype, and lineweight. In terms of processing technology, graphics are mainly divided into two categories: one is based on line information representation, such as engineering drawing, contour map, curve block diagram of surface, and the other is light and dark map, which is commonly referred to as realistic graphics.

One of the main purposes of computer graphics is to make use of computers to produce realistic graphics. Therefore, it is necessary to create a geometric representation of the scene described by the graphics, and then calculate the lighting effect under the imaginary light source, texture and material attributes by using a certain lighting model. So computer graphics is closely related to another subject, computer aided geometric design. In fact, graphics also takes the curve and surface modeling technology and solid modeling technology which can represent geometric scene as its main research content. At the same time, the result of realistic graphics calculation is provided by digital image, and computer graphics is closely related to image processing.

The difference between the two concepts of figure and image is more and more blurred, but there is still a difference: image only refers to the gray information in the form of bitmap in the computer, while figure contains geometric attributes, or more emphasis on the geometric representation of the scene, which is composed of the geometric model of the scene and the physical attributes of the scene.

(from wikipedia for more information Here)

the OpenGL specification is maintained by the OpenGL architecture review board (ARB) established in 1992. ARB consists of companies that are particularly interested in creating a unified, universally available API. According to the official website of OpenGL, the voting members of ARB in June 2002 include 3Dlabs, Apple Computer, ATI Technologies, Dell Computer, Evans & Sutherland, Hewlett Packard, IBM, Intel, Matrox, NVIDIA, SGI and Sun Microsystems. Microsoft was one of the founding members, but withdrew in March 2003.

(the above is from wikipedia, more information can be found in Here)

this tutorial will use OpenGL4.0, mainly using Visual studio on Windows platform, with two third-party libraries of freePlug and glew (no glm math library is used, because the related math is the content of the exam, so the tutorial will realize the required math function by itself), and use the programmable rendering pipeline to realize the drawing of a fractal triangle. The effect is as follows: Figure: 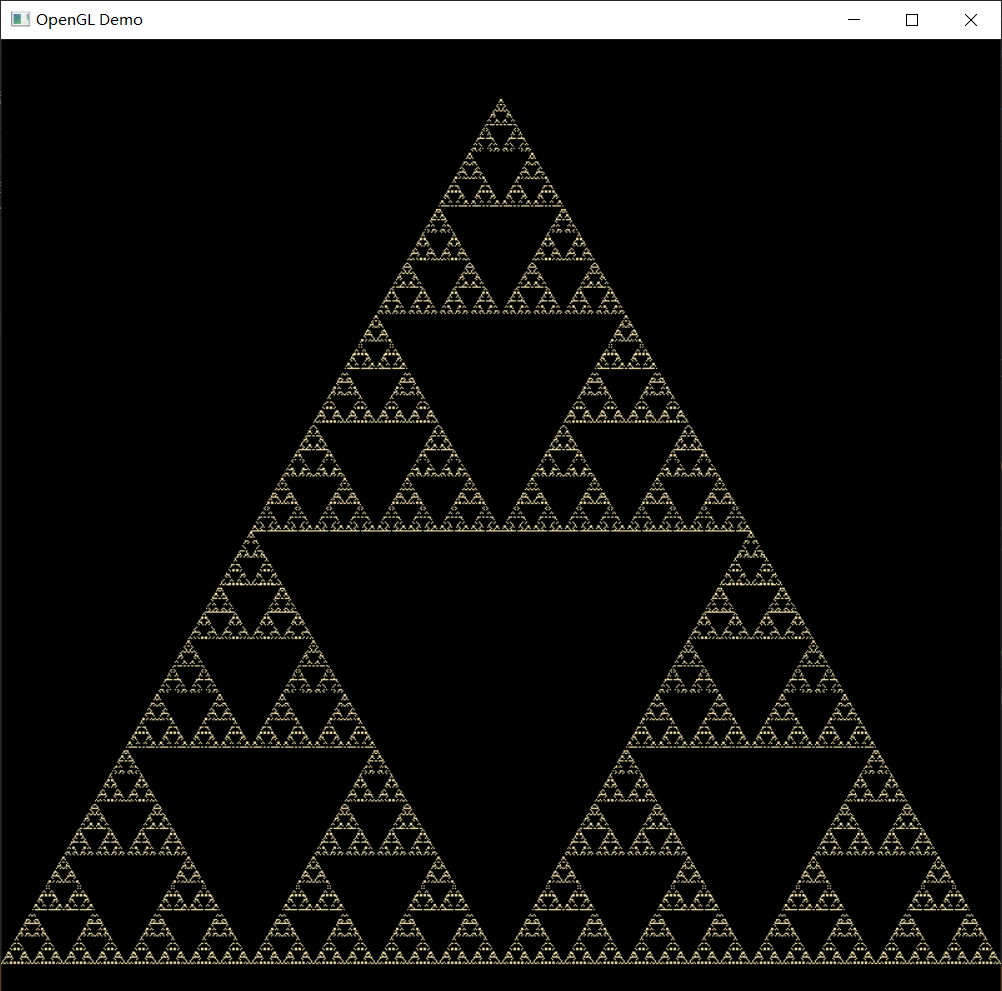 It is said that the most troublesome problem of computer graphics course is to configure an environment that can compile and run OpenGL applications. It's said that some students failed to set up the environment from the beginning to the end of the course. If you ask the TA for help, they will let you install a VS2013 first. As mentioned earlier, this tutorial uses two third-party libraries, freePlug and glew. FreePlug is a library used to create windows that support opengl rendering and can handle input such as keyboard and mouse, and it is quite simple to use (compared with directly using Windows API to create OpenGL device context and render context, or other similar libraries such as glfw). Glew is a library that allows you to use modern OpenGL features (because Microsoft has its own product Direct3D and OpenGL are competitors, the OpenGL API of windows system only supports OpenGL 1.1, in order to use the updated OpenGL, glew is required).

I have packed and integrated the files of freePlug and glew. You can go to Baidu SkyDrive Download, extract code: ed1h. Install them in your Visual studio (this method is applicable to vs201520172019 and above): 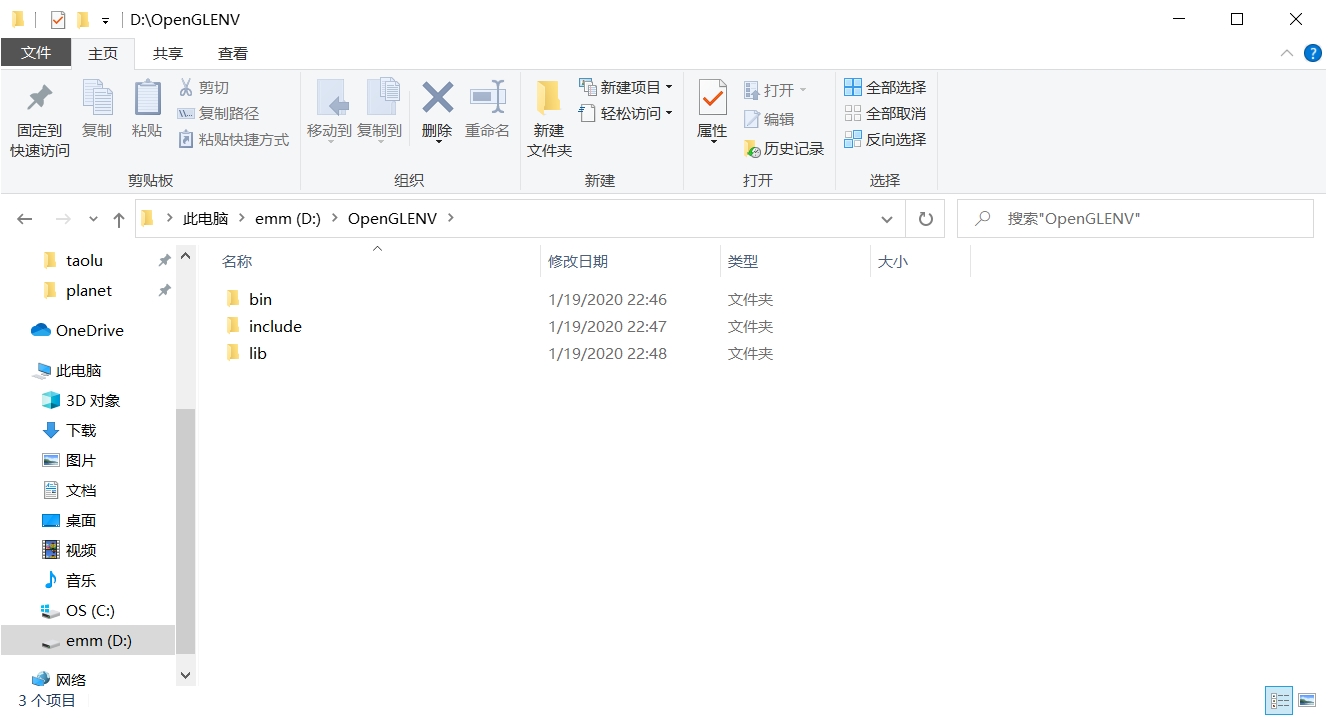 If your computer is a Windows 10 system, you will see a folder called "10" in it and enter: 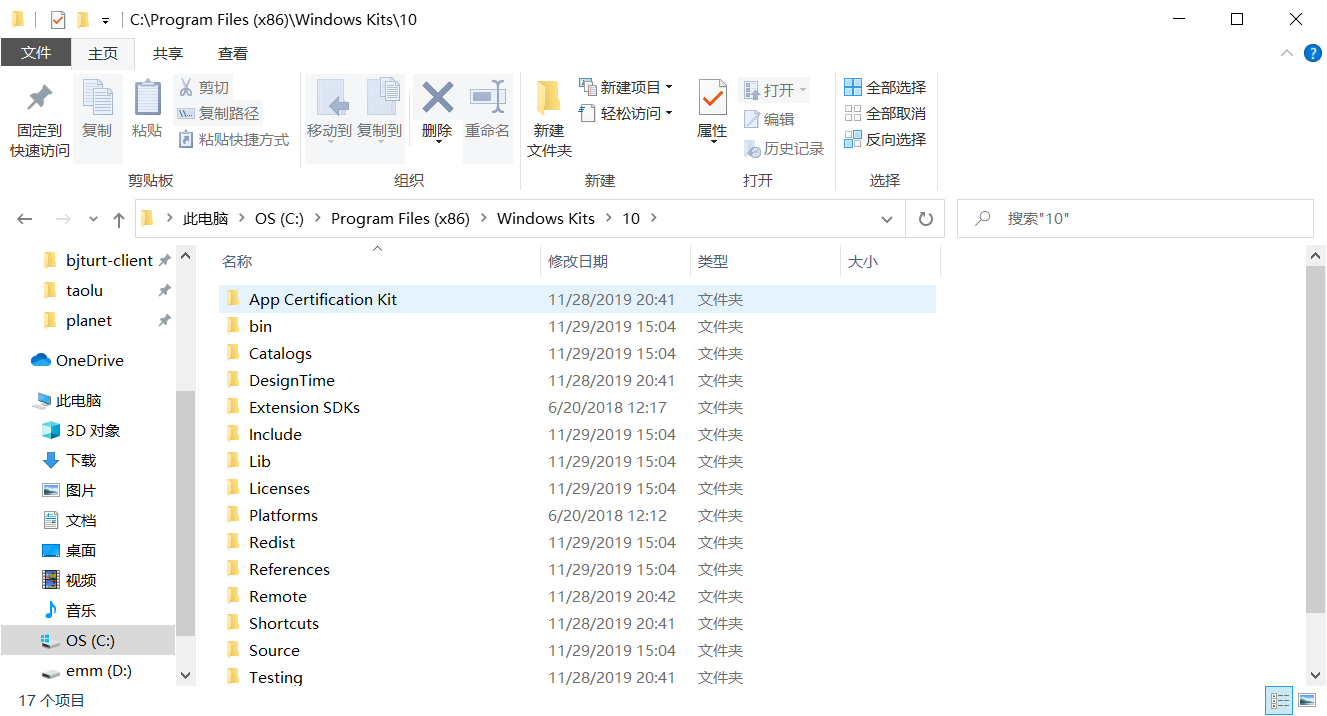 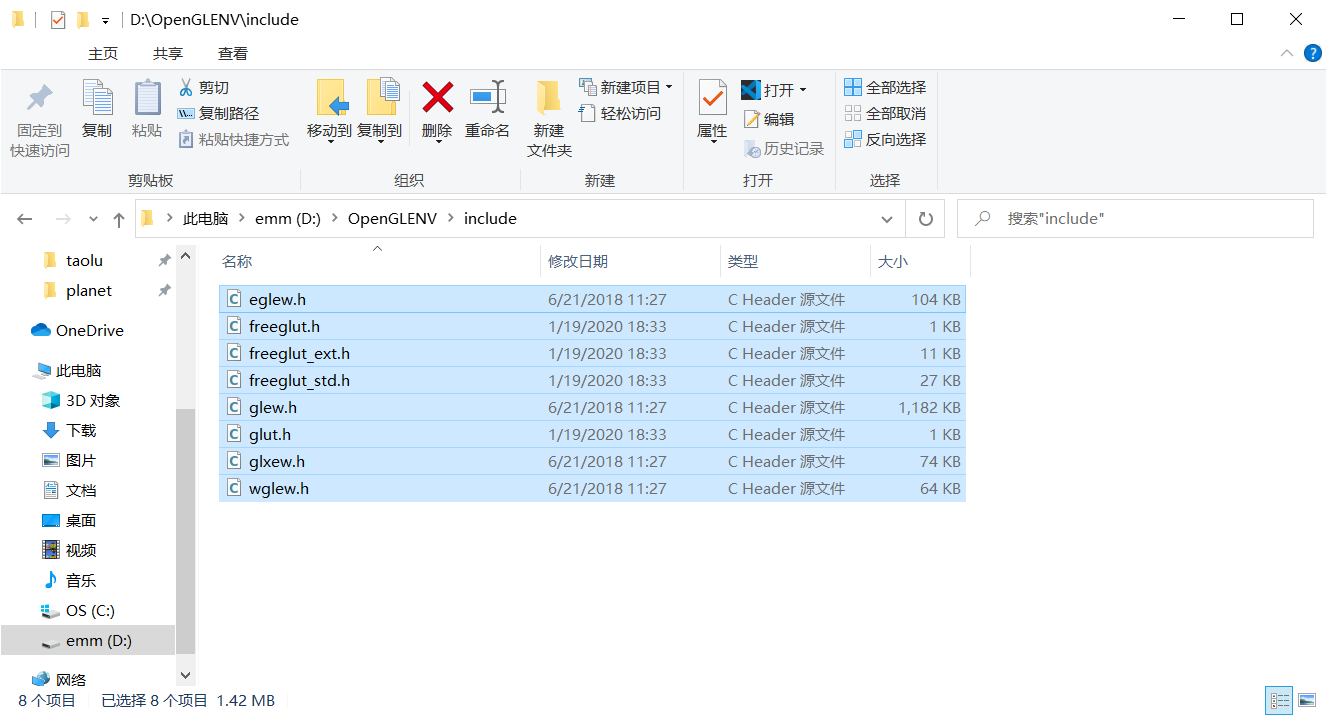 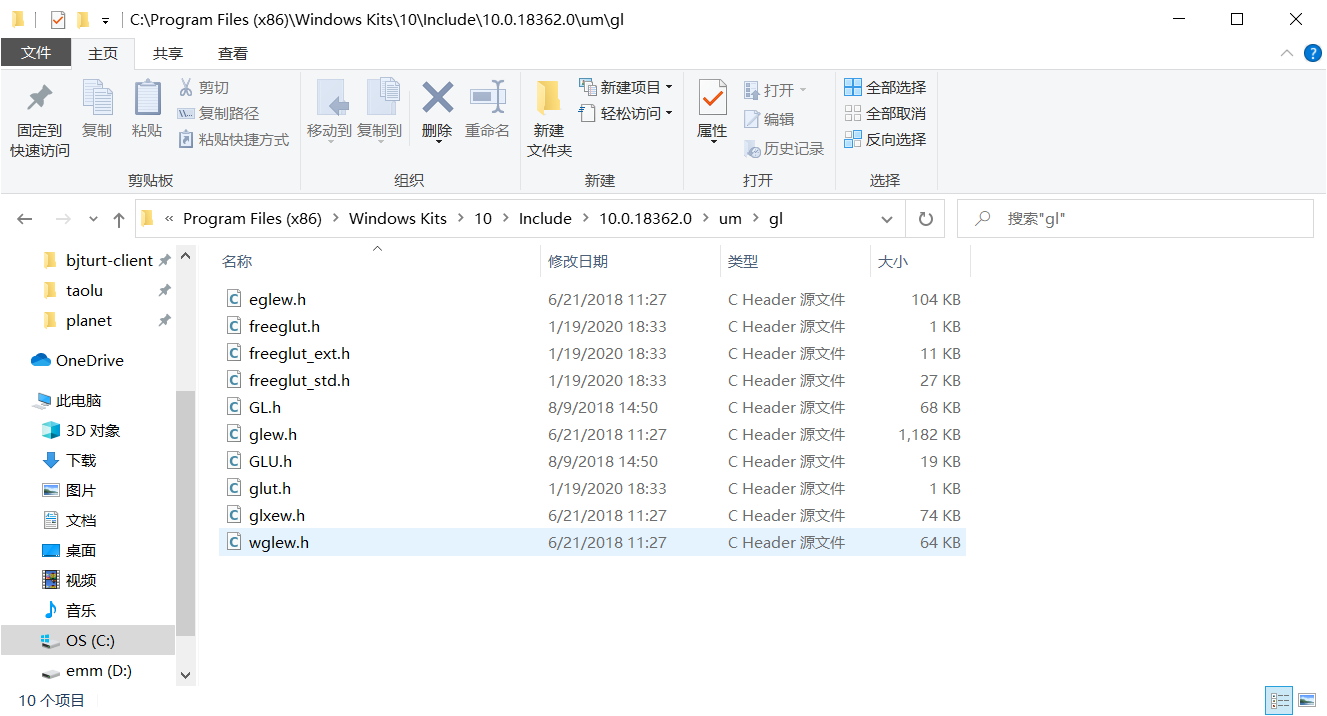 This completes the installation of the header file

Enter the lib folder under OpenGLENV, which contains two subfolders, x86 and x64, corresponding to the 32-bit version and 64 bit version of the library files respectively 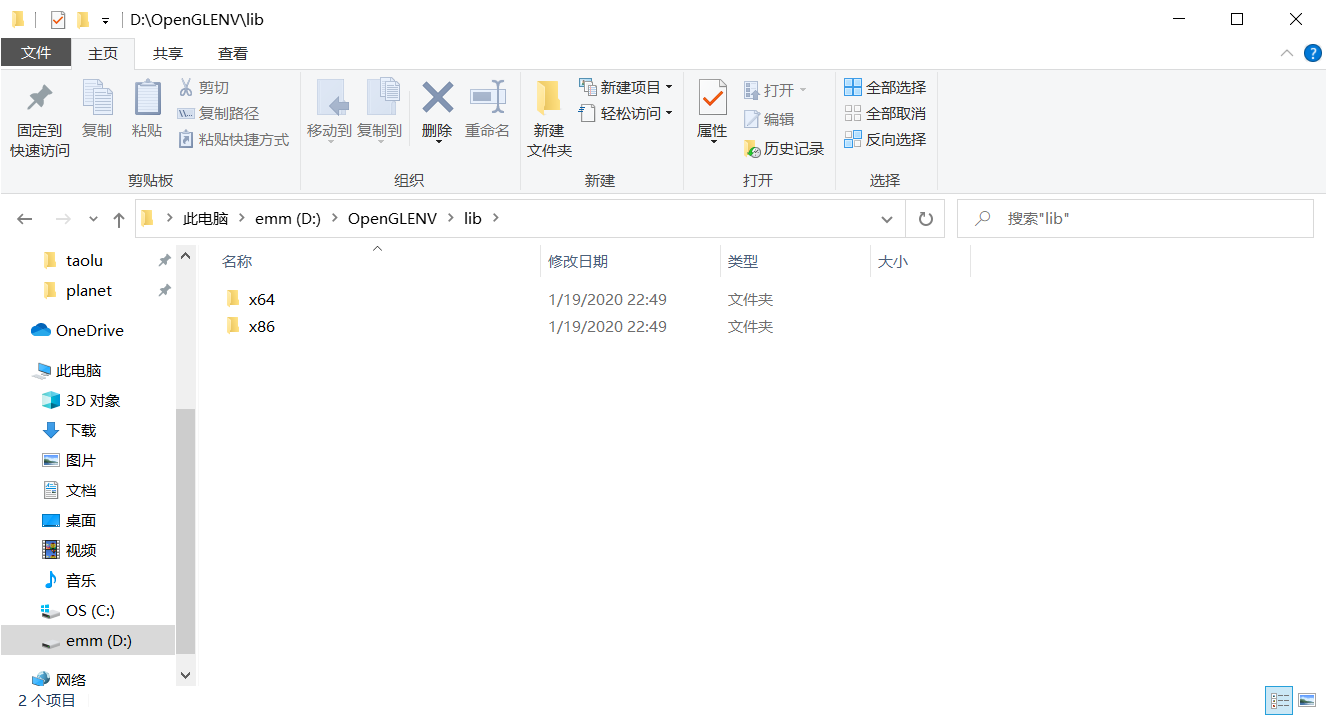 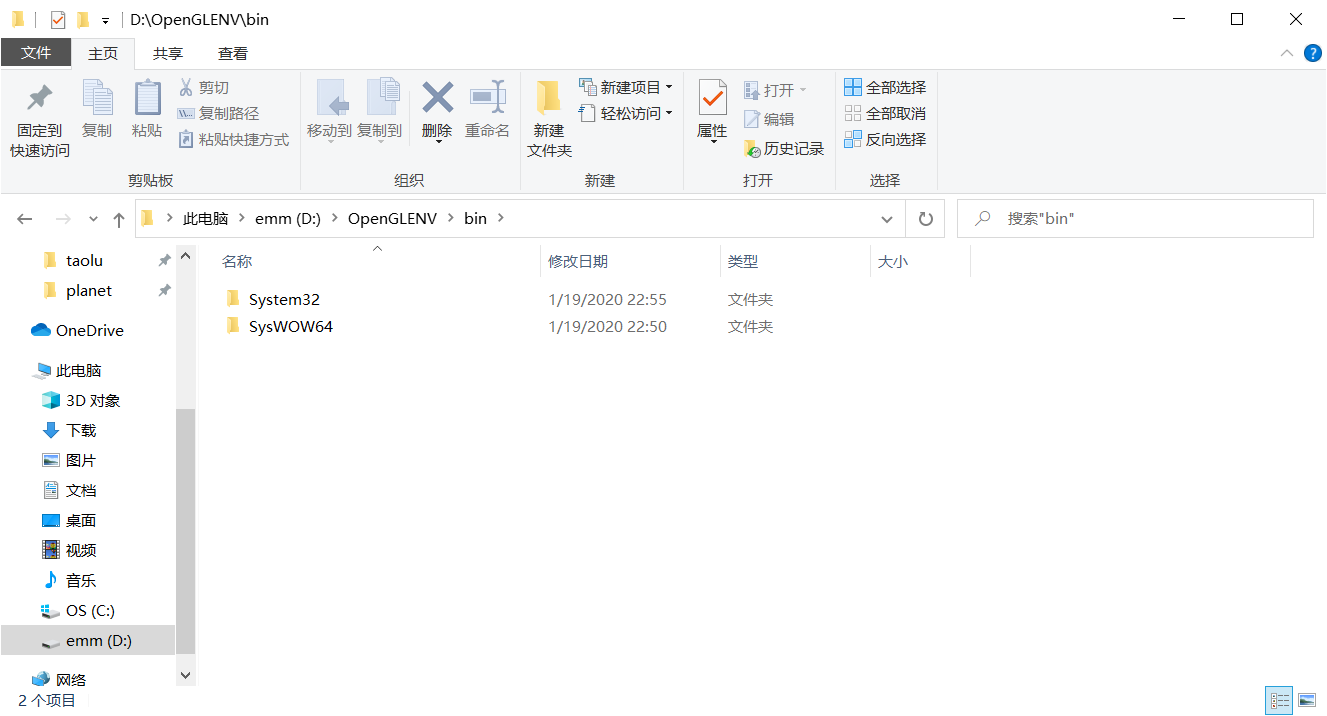 Now that the OpenGL development environment is installed, you can try to create some new C + + projects and add the following code (or download the FirstOpenGL project)

At this stage, you don't need to understand the meaning of the code. It's just to test whether your OpenGL environment has been successfully installed. The code intentionally uses the features of modern OpenGL to realize it. If the code can be compiled and run smoothly and see the golden fractal triangle, congratulations. You can officially start the study of computer graphics and OpenGL. This tutorial will try to use the source code form of such a single file all the time, which is easy to hand in homework