In depth understanding of synchronized (Part 1)

The above results may be positive, negative or zero. Why? Because the self increment and self decrement of static variables in Java are not atomic operations. We can view the JVM bytecode instructions of i + + and i – (i is a static variable) (a jclasslib plug-in can be installed in the idea)

JVM bytecode instruction for i + +

Critical Section
If there are multithreaded read-write operations on shared resources in a code block, this code block is called critical area, and its shared resources are critical resources.
In the above code, increment() and increment() are critical areas, and static int count is critical resources.
Race Condition
When multiple threads execute in the critical area, the results cannot be predicted due to different execution sequences of code, which is called race condition.
In order to avoid the occurrence of race conditions in the critical zone, there are many means to achieve the purpose: 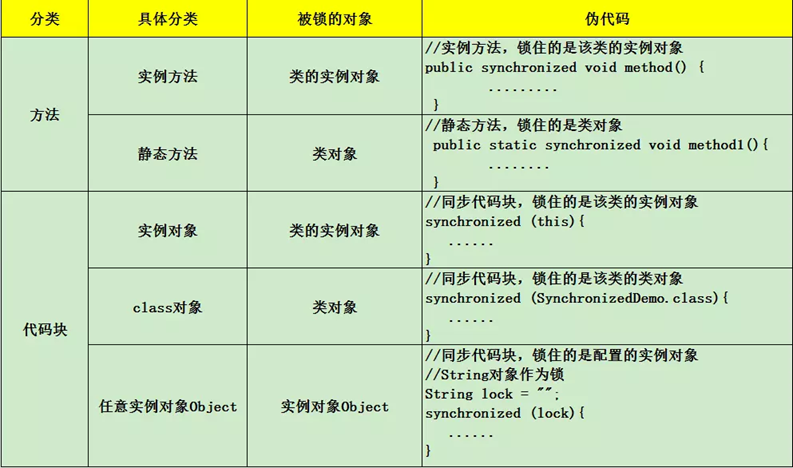 Use synchronized to solve the problems in the above code.

Mutex is a built-in mutex, which is based on the JVM's low-level operating system. Of course, the JVM built-in Lock has been greatly optimized after version 1.5, such as Lock Coarsening, Lock Elimination, Lightweight Locking, Biased Locking, Adaptive Spinning and other technologies to reduce the overhead of Lock operation. The concurrency performance of built-in Lock has been basically the same as that of Lock.
The Java virtual machine supports the synchronization of methods and instruction sequences in methods through a synchronization structure: monitor. The synchronization method is through access in the method_ Set ACC in flags_ Synchronized flag; Synchronous code blocks are implemented through monitorenter (locking) and monitorexit (unlocking). The execution of the two instructions is realized by the JVM by calling the mutex primitive of the operating system. The blocked thread will be suspended and waiting for rescheduling, which will lead to switching back and forth between the "user state and kernel state", which has a great impact on the performance.

Bytecode instruction of the above code 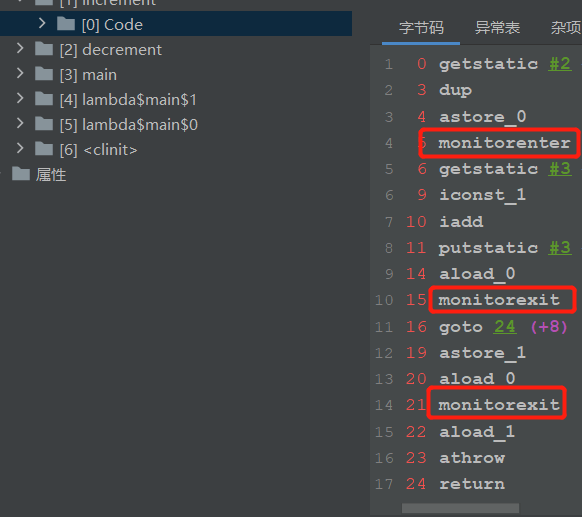 There will be no monitorenter and monitorexit instructions inside the method. But in method access_ ACC will be set on the flags_ Synchronized flag. 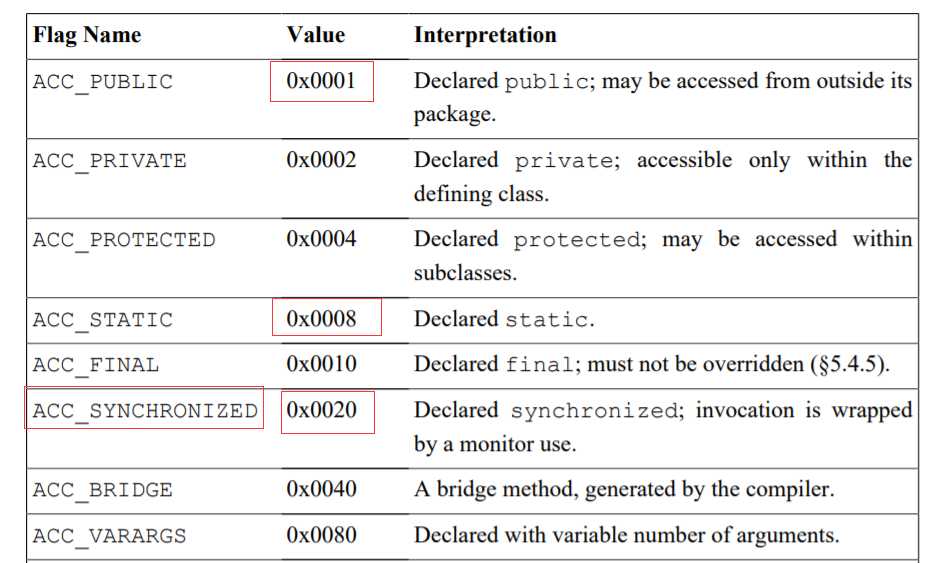 Monitor is literally translated as "monitor", while the field of operating system is generally translated as "management". Management refers to the process of managing shared variables and operating on shared variables to make them support concurrency. Before Java 1.5, the only concurrent language provided by the Java language was management. The SDK and contracting provided after Java 1.5 were also based on management. In addition to Java, C/C + +, c# and other high-level languages also support management. The synchronized keyword and the three methods of wait(), notify(), and notifyAll() are the components of implementing management technology in Java.
MESA model
In the development history of pipe process, there have been three different pipe process models, namely Hasen model, Hoare model and MESA model. MESA model is now widely used. The following describes the MESA model: 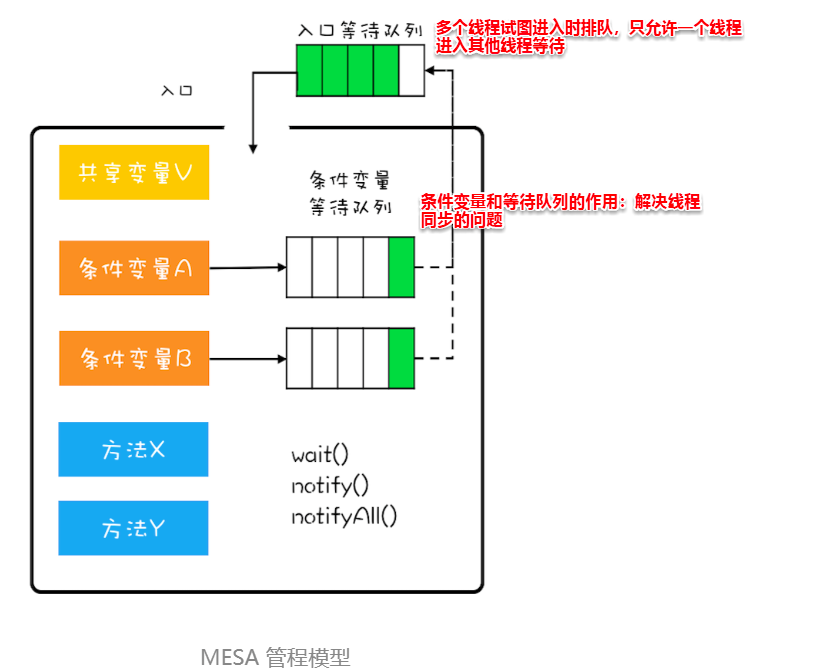 For MESA pipe process, there is a programming paradigm:

Prevent other threads from calling notifyAll() for false wake-up. When the awakened thread executes again, the condition may not be satisfied, so the loop inspection condition is not satisfied. The wait() method of MESA model also has a timeout parameter to avoid permanent blocking of threads entering the waiting queue.
This is mentioned in the comment of the wait() method. 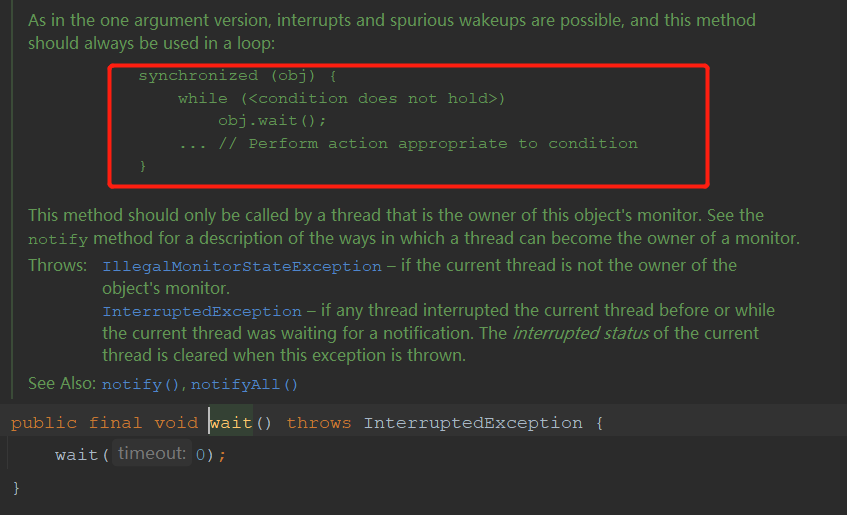 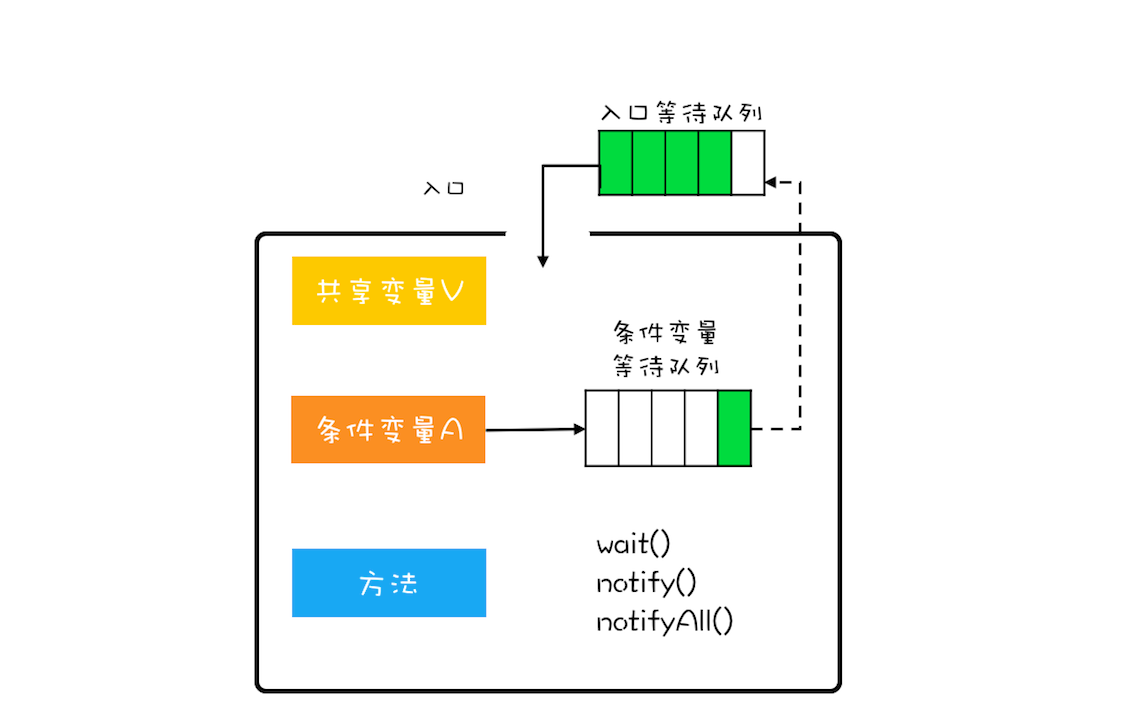 Explain the important attribute: owner points to thread 1 when thread 1 holds the lock. cxq enters the linked list after the thread fails to compete for the lock. When the thread holding the lock executes the wait method, it may enter cxq or EntryList according to different strategies.

Object's memory layout
synchronized locks are added to objects. How do lock objects record lock status?
In the Hotspot virtual machine, the layout of objects stored in memory can be divided into three areas: object Header, Instance Data and Padding. 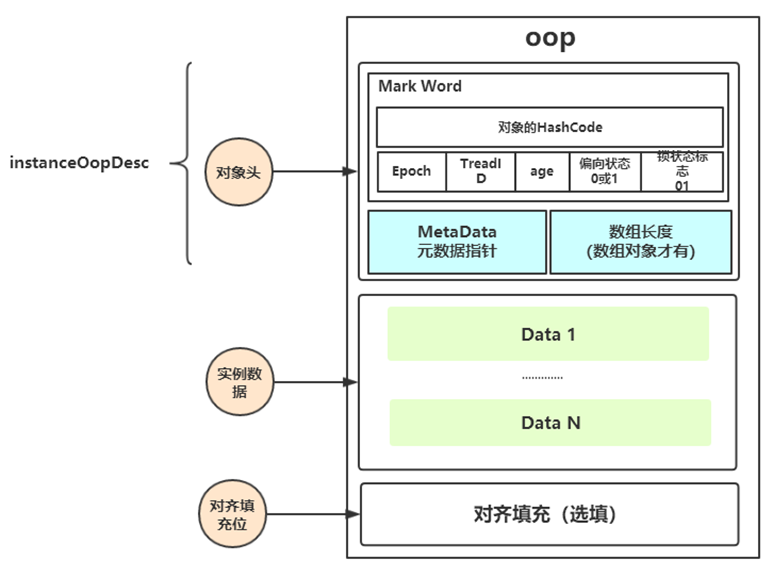 This part will be discussed in the special topic of jvm.
Back to the previous question: how does the object record the lock state when synchronized locks are added to the object? The lock status is recorded in Mark Word in the object header of each object
How does the object header record the lock status
The object header is divided into three parts: Mark Word, Klass Pointer and array length (only array objects have)
Mark Word: used to store the runtime data of the object itself, such as HashCode, GC generation age, lock status flag, lock held by thread, biased thread ID, biased timestamp, etc. the length of this part of data is 32bit and 64bit in 32-bit and 64 bit virtual machines respectively, which is officially called "Mark Word".
The other two are analyzed in the jvm topic.

Hash: saves the hash code of the object. Call system. During runtime Identityhashcode () to calculate, delay the calculation, and assign the result here.
Age: save the generation age of the object. Indicates the number of times the object is GC. When the number reaches the threshold, the object will move to the old age.
biased_lock: bias lock identification bit. Since the lock identification of no lock and biased lock is 01, there is no way to distinguish them. Here, a biased lock identification bit of one bit is introduced.
Lock: Lock status identification bit. Distinguish the lock status. For example, 11 indicates the state of the object to be recycled by GC, and only the last two lock identifiers (11) are valid.
JavaThread *: save the thread ID holding the partial lock. When the mode is biased, when a thread holds an object, the object will be set as the ID of the thread. In the later operation, there is no need to attempt to obtain the lock. This thread ID is not the thread ID number assigned by the JVM. It is the same as the ID in Java Thread.
epoch: save the offset timestamp. Bias lock during CAS lock operation, the bias flag indicates which lock the object prefers

Use the JOL tool to track lock mark changes

Before, we tested the code used by JOL tool

Look at the number 001 in the red box. This is the flag bit of the lock. Corresponding to 001 mentioned above, it means no lock
The above code is modified to

00 represents a lightweight lock, and the last three 8 bits refer to the memory address of the lock record in the stack holding the lock thread.
JDK1. After 5, the synchronized is optimized, and the concepts of biased lock and lightweight lock are introduced. Why not biased lock?
Here is a concept called biased lock delay. Before explaining this concept, let's understand what biased lock is

Like the system we use out. Println and the append method of StringBuffer contain synchronized. In order to avoid the overhead of single thread lock performance (without competition), biased lock is introduced.

We turn off the bias lock delay

Execute the above code again:

Now use the default case, that is, without adding any jvm parameters, modify the above code before execution

101 is the sign of bias lock. This verifies the bias lock delay.

Bias lock elimination and upgrade
There is a question: if the object calls hashCode, will the biased lock mode be enabled?

When the lock object calls hashCode, the biased lock becomes a lightweight lock. Why refer to the object structure description diagram under 64 bit JVM.
Call obj. Of the lock object Hashcode() or system The identityhashcode (obj) method will cause the bias lock of the object to be revoked. Because for an object, its hashcode will only be generated and saved once, and there is no place to save hashcode in partial lock

Bias locks are directly upgraded to heavyweight locks.
Conclusion: when the object is biased (that is, the thread ID is 0) and biased, calling HashCode calculation will make the object no longer biased:

Looking at such a situation, what is the situation if wait or notify is called in the biased state

Upgrade directly to heavyweight lock. As mentioned earlier, the synchronized keyword, wait(), notify(), and notifyAll() are implemented based on the Monitor mechanism, so the biased lock is directly upgraded to a heavyweight lock.
Let's look at notify()

Upgrade from biased lock to lightweight lock, and then become lockless. But this is not the only result. The state of running lock multiple times is not necessarily the same.

Upgrade lightweight lock to heavyweight lock. When multiple threads access a resource at the same time.

There are two more questions: 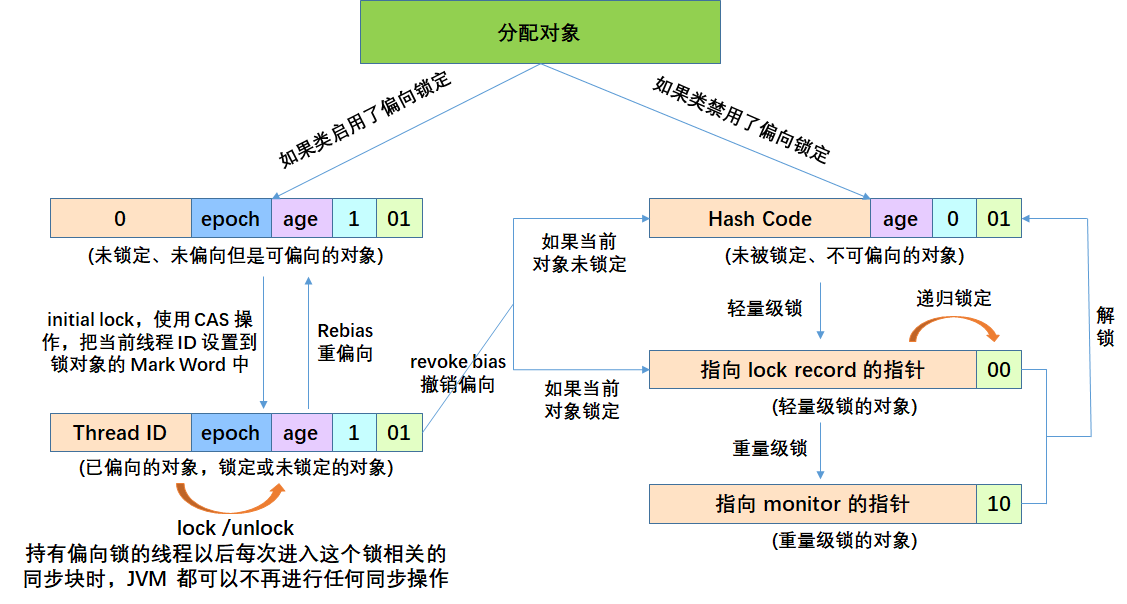